Anto returned from his biking around Paris quite late, well after 11pm. Sadly I was still up with a baby who was being distressed by sore gums/teething.  Paracetamol seemed largely ineffective for the poor poppet 🙁 As it turns out none of us got much sleep. Anto tried to sneak out and sleep on the lounge but was met with cries of ‘dad, come back’.  He still managed slightly more sleep than me, so got Astrid up and gave her breakfast after we abandoned all hope of her sleeping any longer. I managed an hour or so of sleep (even though she was not being quiet) as once the Nurofen had kicked in she was happy as a clam again.

I didn’t get too much sleep though as she snuck into the bedroom repeatedly and pulled the doona off me and finally came in and upended an entire water glass over me (and the bed) to really ensure I would get up. At any rate, with a slightly happier bub we decided to have some breaky and head down for a lazy shop and to seek out the ‘best’ falafel in Paris.

We headed down to Forum des Halles to go back to some shops we had previously liked. Astrid, of course, fell asleep in the pram almost straight away and we let her have a nap.  We wandered the shops in peace but didn’t end up buying much as we have too much stuff already and packing is a nightmare. We did get Astrid another pair of mittens. It’s impossible trying to keep mittens on her and it’s getting quite cold. We have seen the last of the ‘nice’ weather for the rest of our trip and it seem like everywhere we are travelling is going to be very cold the next few days. It turns out the new mittens are more to Astrid’s liking and she actually kept them on, well today at least. 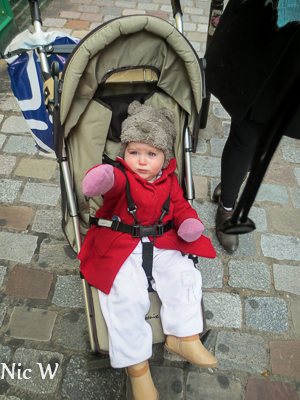 We struggled to wake her up and ended up walking to a cafe so she could have some morning tea to wake up (with the hope of having a decent sleep later). Always dangerous to wake a sleeping baby but it was going to be a very long afternoon if she didn’t have a nap.  She enjoyed her croissant and hot chocolate but didn’t get through the croissant so we took it with us.  Anto thought the pastries were too good and decided to order a chocolate and banana tart and scoffed it before realising we were about to have an early falafel lunch before he had to head to London.

So falafel doesn’t seem very ‘Parisian’ but apparently there are a lot of good falafel joints around. There are many blogs and reviews dedicated to the ‘best’ falafel, but we had repeatedly read that *the* place to go was L’As du Falafel in the Marais. We had walked around that area quite a bit and hadn’t actually seen the place, but then again we are still discovering stuff on the street we ‘live’ on, after almost 2 months. There is just so much to see that it’s easy to miss things. Plus we often wander back different ways and find a whole new street of possibilities. This was another one of those scenarios, we hadn’t actually been down this street before but had been down all the streets around it.  There were several falafel places in the area (and it doesn’t look like an area you’d ‘find’ falafel places), lots of cool cobbled streets and cute shops.

We had read that the falafel was half the price take away, so take away we did.  Anto discovered that you didn’t get to choose your toppings you just get what they give you. There were meaty options but we both wanted to try the falafel. It came out warm and smelling delicious. Very different to what you get on a late night in Sydney or Canberra. The falafel was moist and delicious. The pita bread was bready, warm and soft. It was filled with a variety of salads, cabbage and roasted eggplant and topped with a herbed tahini. It was fantastic!  Totally not over hyped. 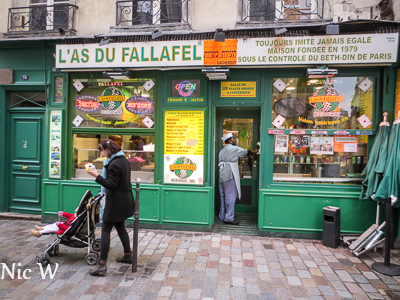 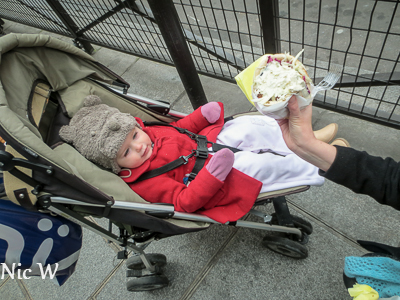 We found it difficult to push a pram down the cobbled streets while eating the enormous falafel pockets and we must have looked a sight with the sauce dripping everywhere. It was fun to walk around Paris on a cold morning eating a hot and yummy falafel. They were huge though and we were both stuffed. Meanwhile, Astrid was not keen on the falafel but still had croissant she had been nibbling on. While waiting for our falafel I had swept the croissant crumbs off her and the waiting pigeons delighted in this. Astrid then figured out she could ‘feed’ her croissant to the pigeons. Lucky Parisian pigeons getting freshly baked croissant!

Back in the apartment, Miss A, again resisted her compulsory sleep while we finalised the packing for the bags going to London.  Once we leave Paris, on Friday, we are on trains through Belgium, and then a cheap flight back to London. We always knew we didn’t want to haul all the luggage with us on this part of the trip, and the Brussels – Heathrow trip has a tiny luggage allowance. Our original plan was for the luggage to be picked up from our apartment and shipped to Heathrow and be waiting for us there. It turns out it was logistically easier and cheaper for Anto to catch the Eurostar with the luggage and leave it at St Pancras station in London.

This afternoon it was time for the great luggage lift.  We had 4 large bags/suitcases totally 77kg going ahead to London. Clearly we have done too much shopping!  We woke up the sleeping baby (which wouldn’t have happened if she had slept when she was supposed to) and got all the luggage down two flights of windy stairs to our foyer.  Anto had one big bag on his back and was wheeling one suitcase with a sports bag strapped to the top. I had the large suitcase and an Astrid. Together all the luggage weighed more than Astrid and I together. Poor Anto was a bit of a packhorse. 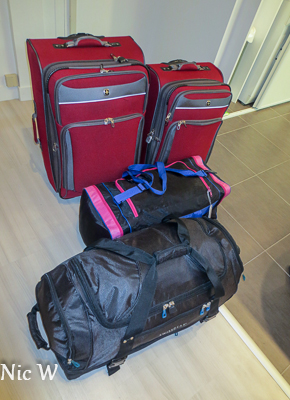 It’s a pretty straight run along paths through to the Reamur/Sebastapol station which is 7 or 8 minutes walk from us. Today it took longer and there was a lot of roadwork. It was a bit of a pain getting all the luggage down the metro stairs and through the tiny turnstiles and we got a few odd looks. Luckily its a short run to Gare du Nord station and once there there were escalators so no real issues.  Of course once Anto got to the Eurostar terminal they took one look at the number of bags and sent him off to pay for excess luggage. We kind of anticipated this but were hoping to get away with it!

Astrid and I bid Anto and the big pile of bags goodbye and were promptly back at the apartment 15 minutes later for a  couple of hours of TV, resting and tidying before and early  night for the young lady. Over to Anto…..

Sadly Anto’s night was just beginning, on the Eurostar you go through Immigration before you get on the train, the French departure was almost as much of a formality as our original entrance. The UK entry procedure was a little more complicated, with questions about my new passport (luckily I had the old one which quickly explained things) and other questions about why you would travel to the UK for 2 hours carrying your body weight in baggage. After I explained that ‘my wife thought this would be more convenient than carrying it all over Europe’, the agent had a good laugh and decided that I was unlikely to present any risk to the UK, other than collapsing under the weight of the bags and getting in someones way. Once through Immigration we went through a security check (which is the only one we have been on for a train so far on the trip) – the best bit was the sloping conveyor belt up into the scanner, which meant that Anto would throw a bag on and watch it ever so slowly just slide back towards him. A game that seems much funnier in hindsight. Obviously there was nothing that warranted attention as I was allowed to travel onto the departure ‘lounge’ for a short wait before boarding.

Once back down on the platform (I did ‘cheat’ and use the lift) it was a ‘quick’ walk down about 10 carriages (the train was 20 carriages long) before waiting for the people who seem to somehow sit around in the way before realising they are in the wrong place (or some other silly reason). Once the path was clear throwing the bags up onto the train and into the luggage rack next to the door was a fairly simple and relatively painless experience. Finding my seat was nice and easy & I settled in for the 2 hour (ish) journey with the other 8 or so people in my 90 seat carriage. We fairly quickly hit 300km/hr and pretty much sat there most of the trip – with the odd slowing down around towns. Before I knew it we had popped up on the other side of the English Channel – the ‘chunnel’ while efficient was fairly boring – funnily enough it looked like a tunnel (albeit a fairly long one.)

Getting off at St Pancras was a nice and easy process – with plenty of trolleys available for a 1 euro deposit (or a pound if that’s what you have in your pocket) – aside from that they were free and more than dealt with my silly amount of baggage. The wander down to the luggage storage place was entirely without incident as was dropping the bags off – the process couldn’t have been much easier. With about an hour left before my returning train a general wander around the station was had, gifts for Nic purchased (OK oyster cards but just because it’s practical doesn’t meant it’s not a good gift right??). Then going back through French immigration (for some reason you didn’t seem to go through UK immigration..) which was very quick and painless. A quick coffee stop and it was time to re-commence waiting to board – followed by another walk down about 11 carriages (I seem to have a knack for booking seats as far as possible from whichever door will be in operation on the day…) however un-encumbered by an luggage at all there was a significant spring in my step.

Unlike the trip out the carriage was close to completely full. Once again the trip passed without incident – with us rolling into Gare du Nord on time – a quick metro connection later (I was walking in the front door less than 20 minutes after stepping off the Eurostar – my reward for the long walk in London meant I was pretty much at the front of the platform in Paris. Sadly Nic had to stay up to let me in, as we only have one key and our apartment building needs a key to get past the foyer. We both so enjoyed yet another late night! Luckily we had a chocolate flan waiting for us, it’s never too late for chocolate flan……. 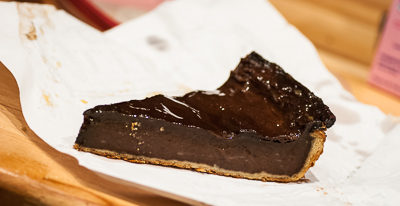