Astrid is never particularly good at sleeping in unfamiliar environments so we figured we were in for an average nights sleep. She managed to outdo herself though with being awake from about 11pm til 5am while we all played musical beds.  Needless to say, when she woke before 7am there were a couple of grumpy adults and an overtired toddler!

We decided we desperately needed coffee and had spied some cafes down at the markets that looked nice, so we headed in that direction.  With a few options to pick from we settled on a cafe that did nice looking hot breakfasts and lots of yummy crepes.  We ordered our eggs and coffees and Astrid got a babycino and crepes…… yet managed to drink all the froth off my coffee and eat both our breakfasts but not her own! The crepes were really good, and normally her favourite so we weren’t sure what was going on there.  At any rate we had a pleasant breakfast and it was starting to get busy at the cafe so we headed the 500m back to the hotel to get ready for our days activities.

At this point Astrid started asking for a sleep.  It was 8.30am about 4 hours before she normally naps, so not a good sign! We agreed she was most welcome to have a sleep and we could go to the zoo after we had all had a rest.  After half an hour of more musical beds, a lot of chatting and no sleeping we gave up and told her she would just have to be tired and headed to the zoo.

Going to the zoo has been the topic of conversation for the last few weeks. Astrid was beside herself with excitement about getting to go and was most keen to see the lions, zebras and monkeys.  The giraffes also usually rated a mention along with elephants.  Given the current state of sleep deprivation we weren’t sure the zoo visit was going to be a huge success but the weather was beautiful (for a Melbourne Autumn day) so we made some lunches from our supplies we had gathered at the markets the day before. Loaded up the bags and stroller, and went and found a tram that would take us to the zoo.

The tram was full of small children, eagerly anticipating a zoo visit, so we knew we were going in the right direction! After only 15 or so minutes we had arrived at Melbourne zoo and purchased our tickets and headed in.  We figured we only had a couple of hours of good behaviour before the overtired toddler decided she’d had enough, so our plan was to see the animals she most wanted to see towards the start and see how we went with our energy and behaviour levels.

First stop was the lions and other big cats and the nearby meercats. We have been told continuously since our visit how the lions were ‘lazy’ and laying around cleaning themselves.  The meercats are great for kids as you can get up close and they were quite cheeky. She quite enjoyed her visit with them. 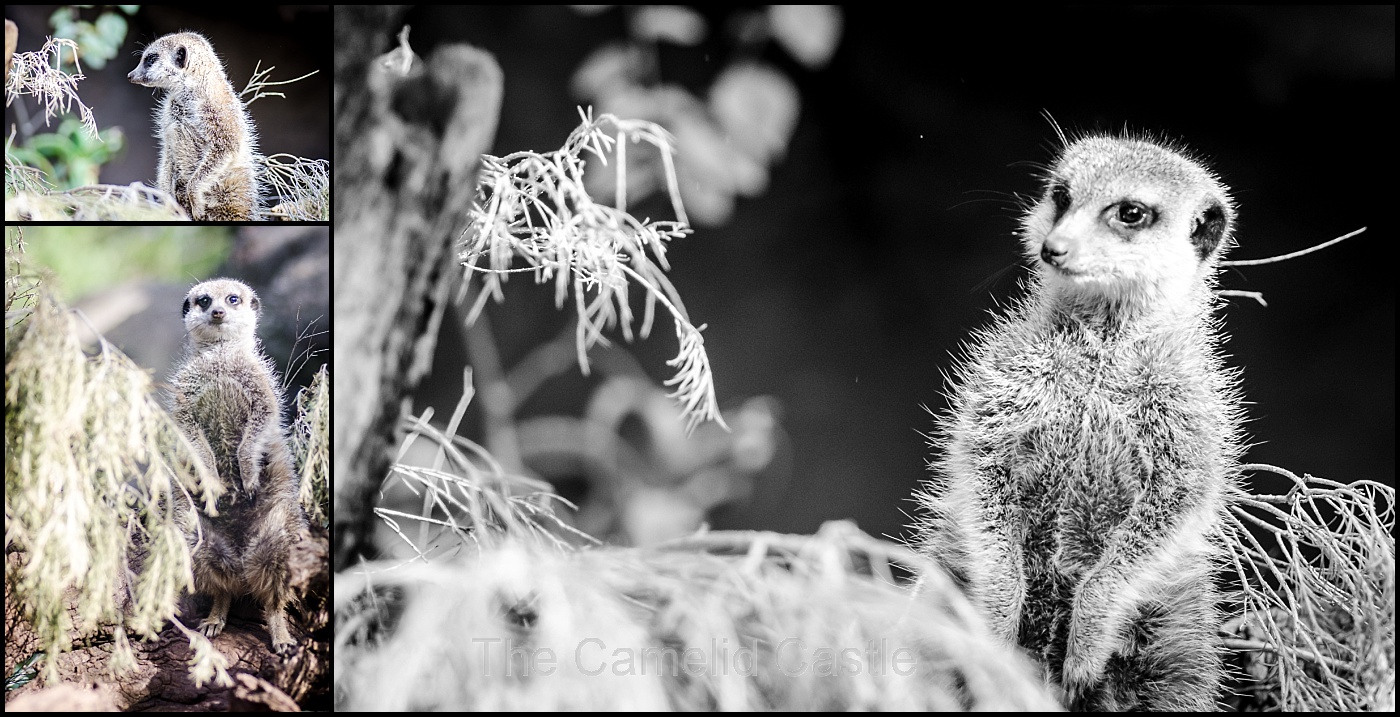 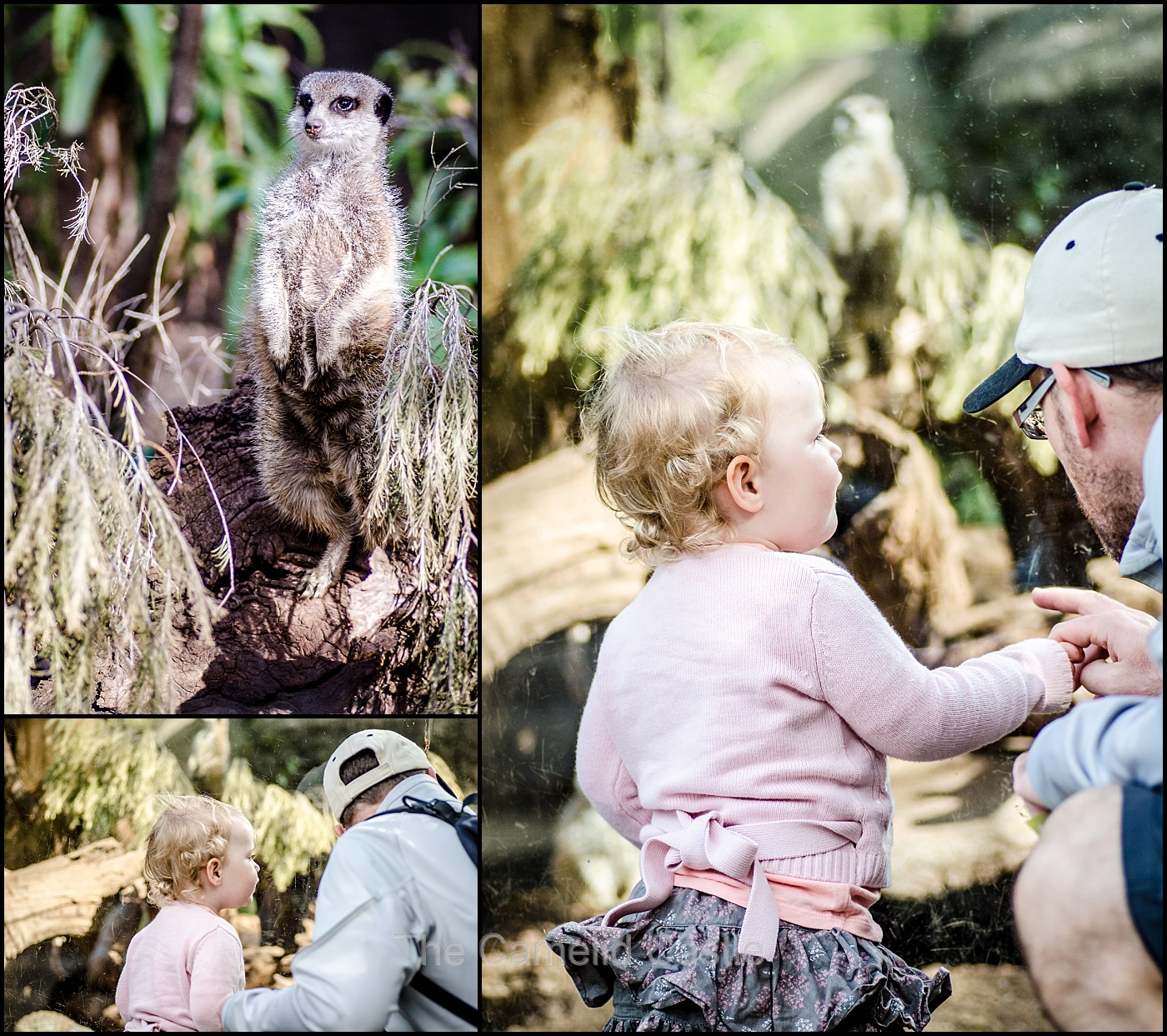 Next stop was the pelican exhibit. Fun because you could get up close and they were being quite interactive. Then the seals, who are also show-offs but impossible to get good photos of, and then the penguins. Astrid loves penguins but these ones were also being ‘lazy’ and sleeping a pile.  We promised better penguins at the aquarium the next day. 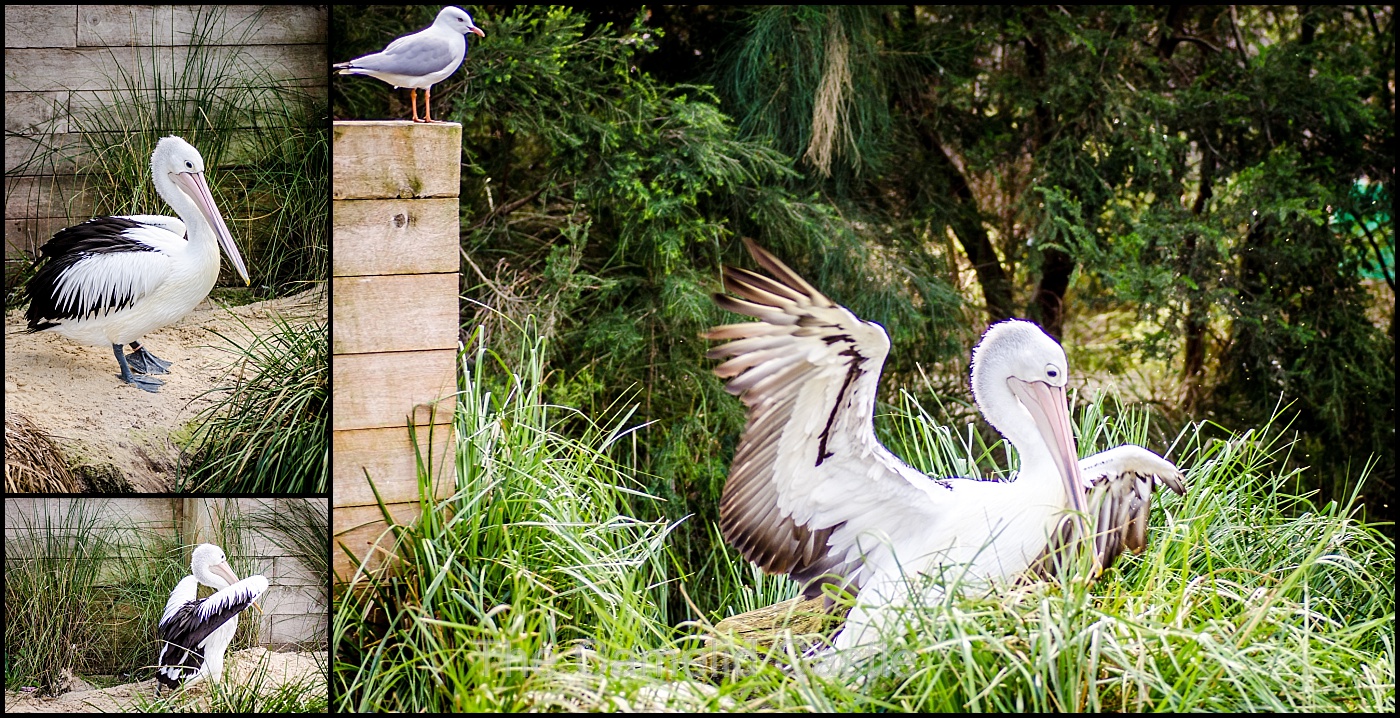 Next stop was the giraffe and zebra exhibit. Another one Astrid had been hanging out for. Astrid loves both giraffes and zebras and was keen to see them. They didn’t disappoint, coming up nice and close and giving us a good view. She did comment that ‘giraffes have long necks’. Can’t fault her on that one! 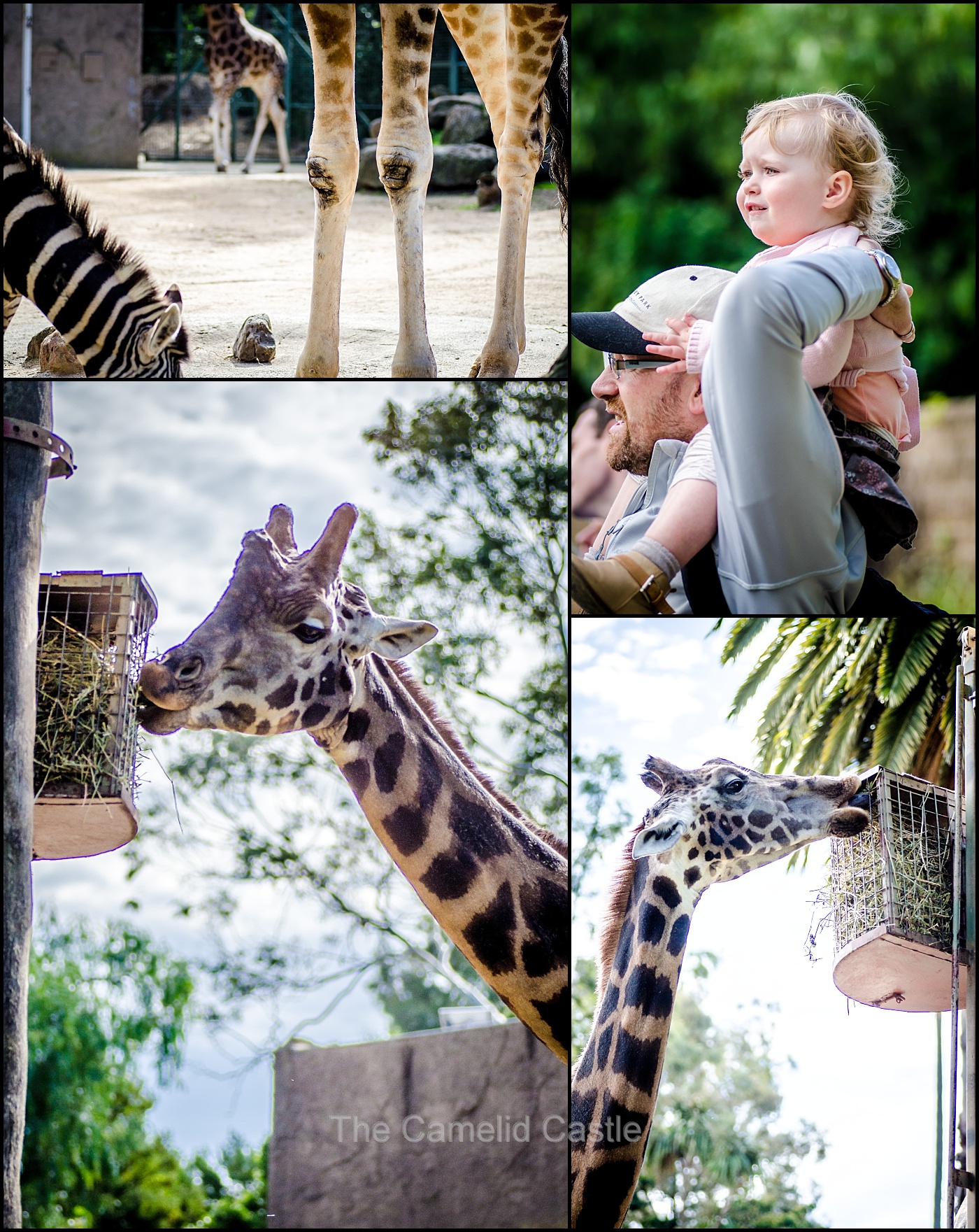 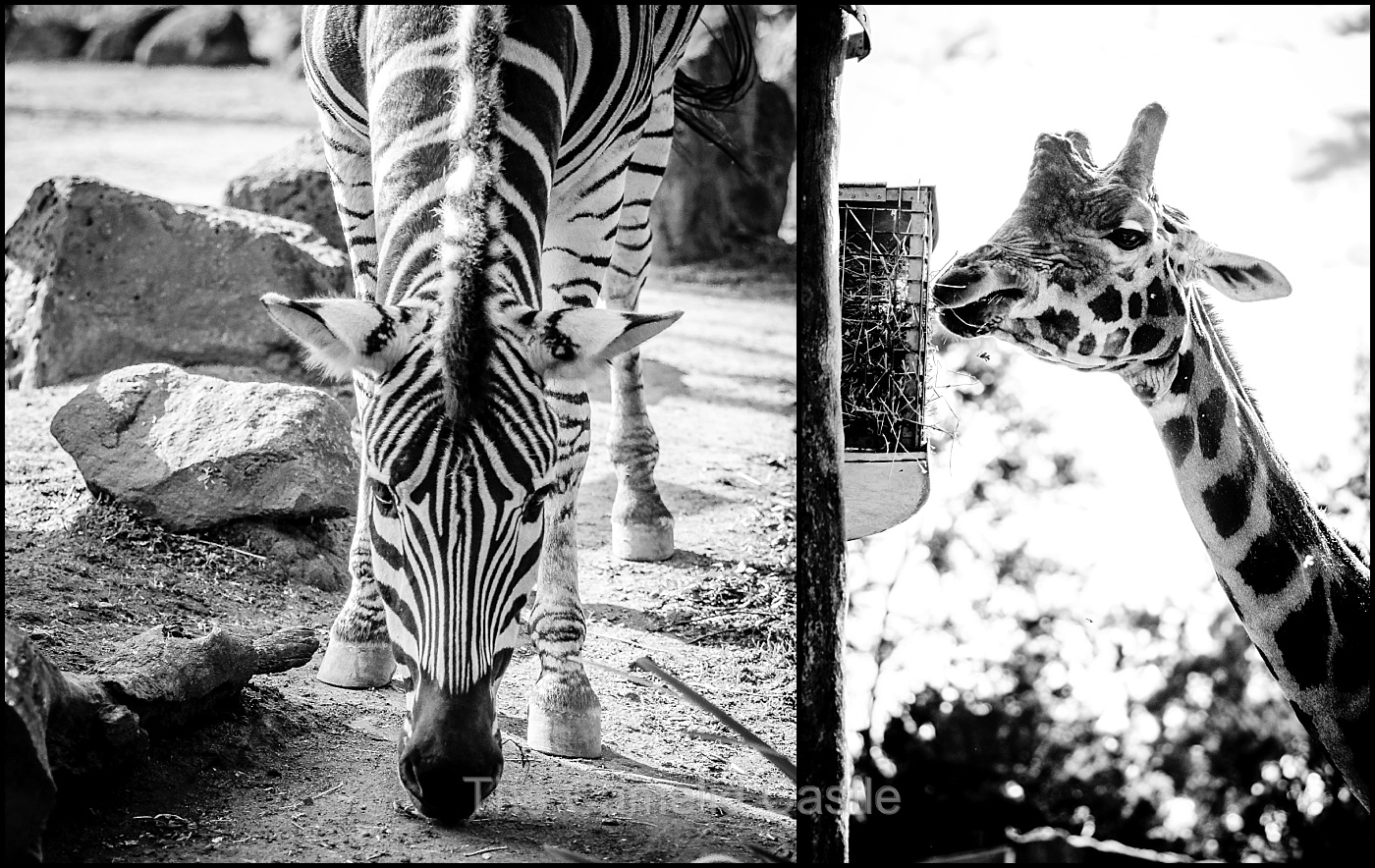 At about 11.30 we stopped for some of our pre-packed sandwiches and a run on the grass. Us adults were still full from breakfast, but the requests for lunch and a sleep for intensifying so we decided to have a break in case she wanted to have a rest in the stroller. After lunch we headed for the otters (who were being cute but not keen on having their photo taken), the gorillas (who were happy to let us watch them sleep from a distance) and then the butterfly house.

Previously Astrid had loved butterflies, and she was keen on watching them fly around….. until they started landing on Anto. Then she got quite upset that they were hurting him and kept telling them to ‘shoo fly, shoo fly’.  The butterflies were quite keen on Anto’s hat but Astrid was not keen on them being on it! 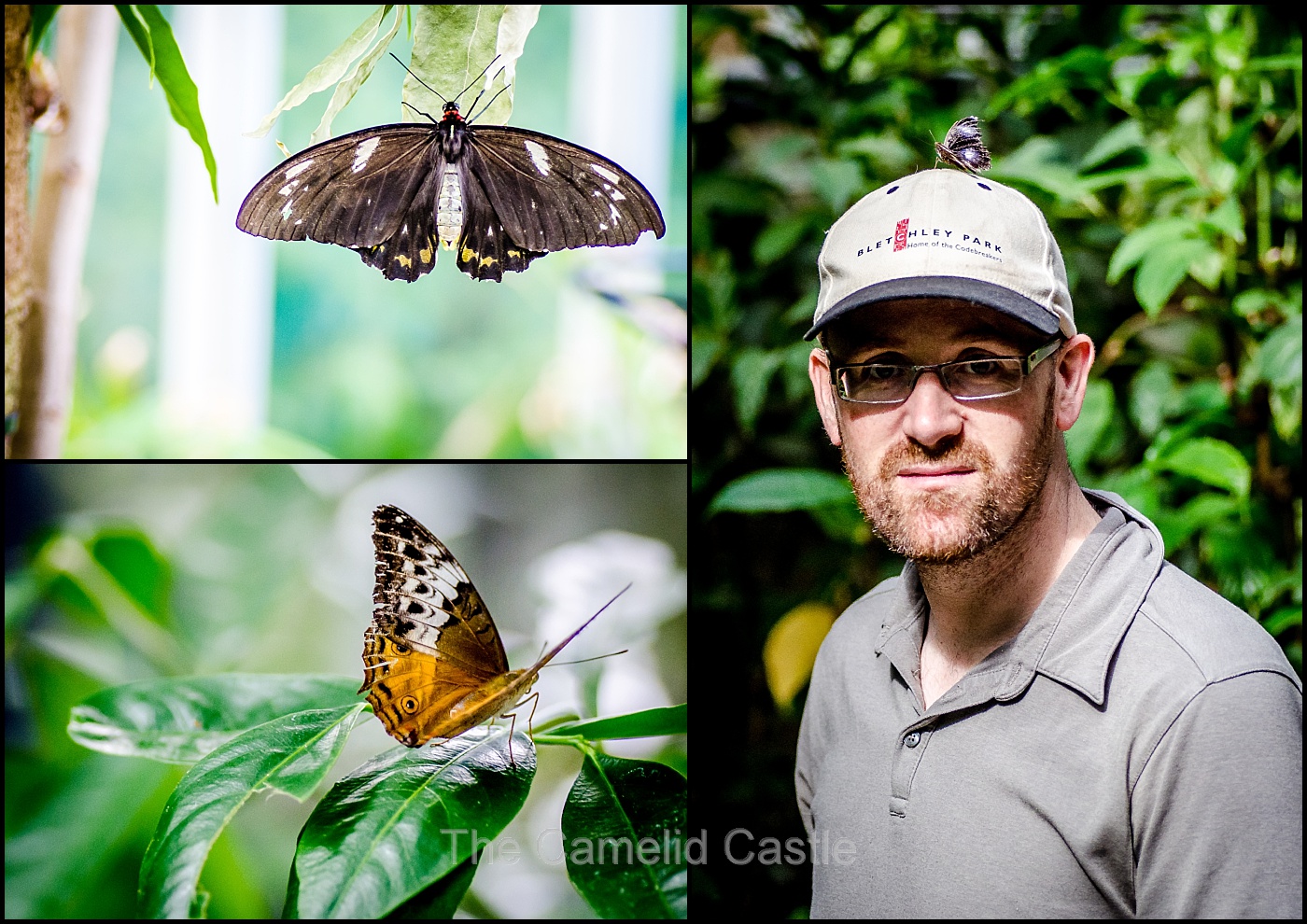 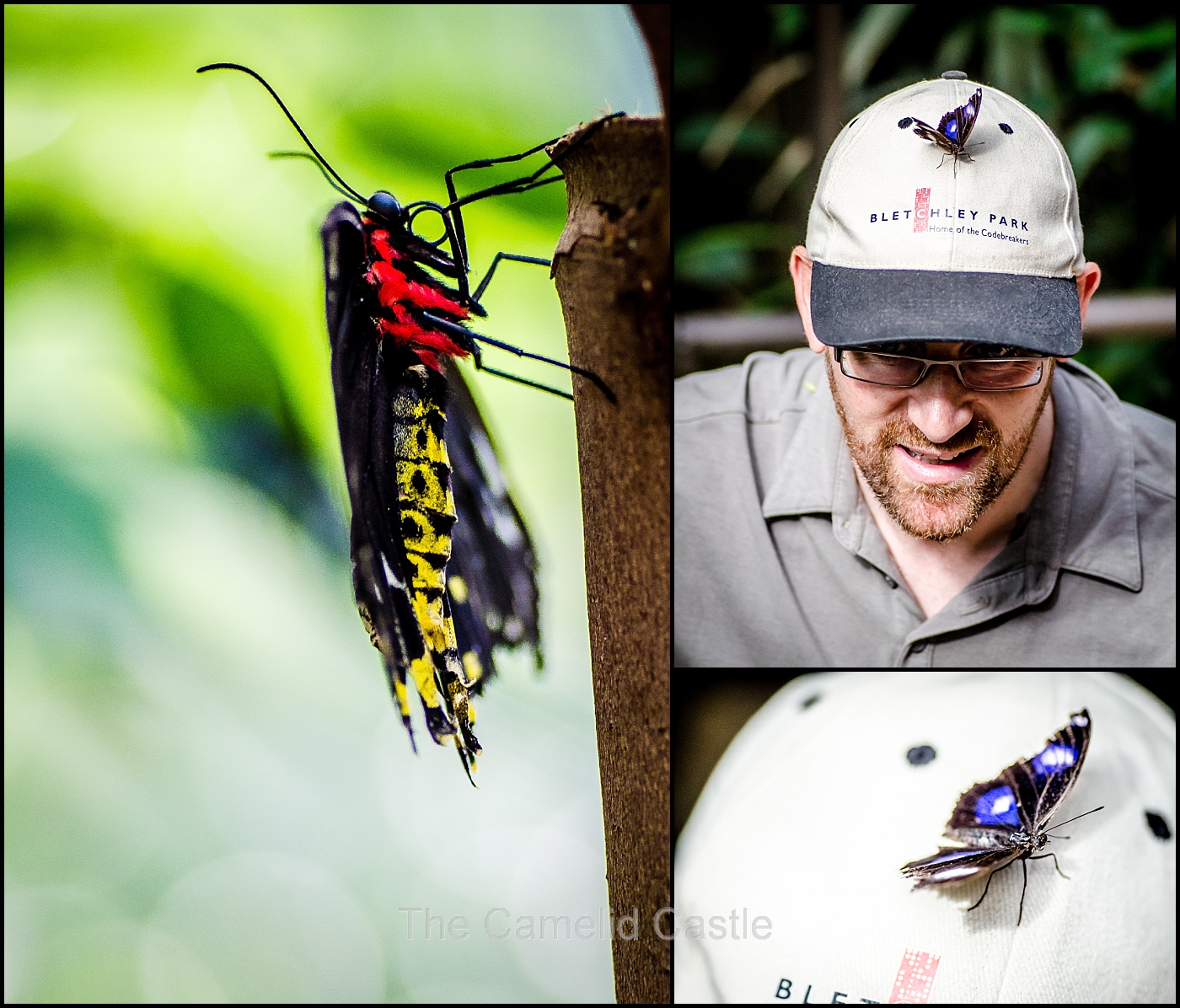 Next were the elephants and pygmy hippos. The elephants were cute, especially the babies. However it was getting busy at the zoo and despite Astrid wanting to chat to them it was hard to get close. The pygmy hippos were happy to let us see them sleep and take photos, but they weren’t being that interesting.

Finally it was time to head to the monkey and primate exhibit.  At the Zurich zoo the primate exhibit was awesome and one of Astrids favourite things.  She was very keen on seeing the monkeys but it was getting pretty crowded and her attention span was waning. She did quite like the lemurs and watching the monkeys swinging around.  With more sleep under her belt we could have spent longer there. 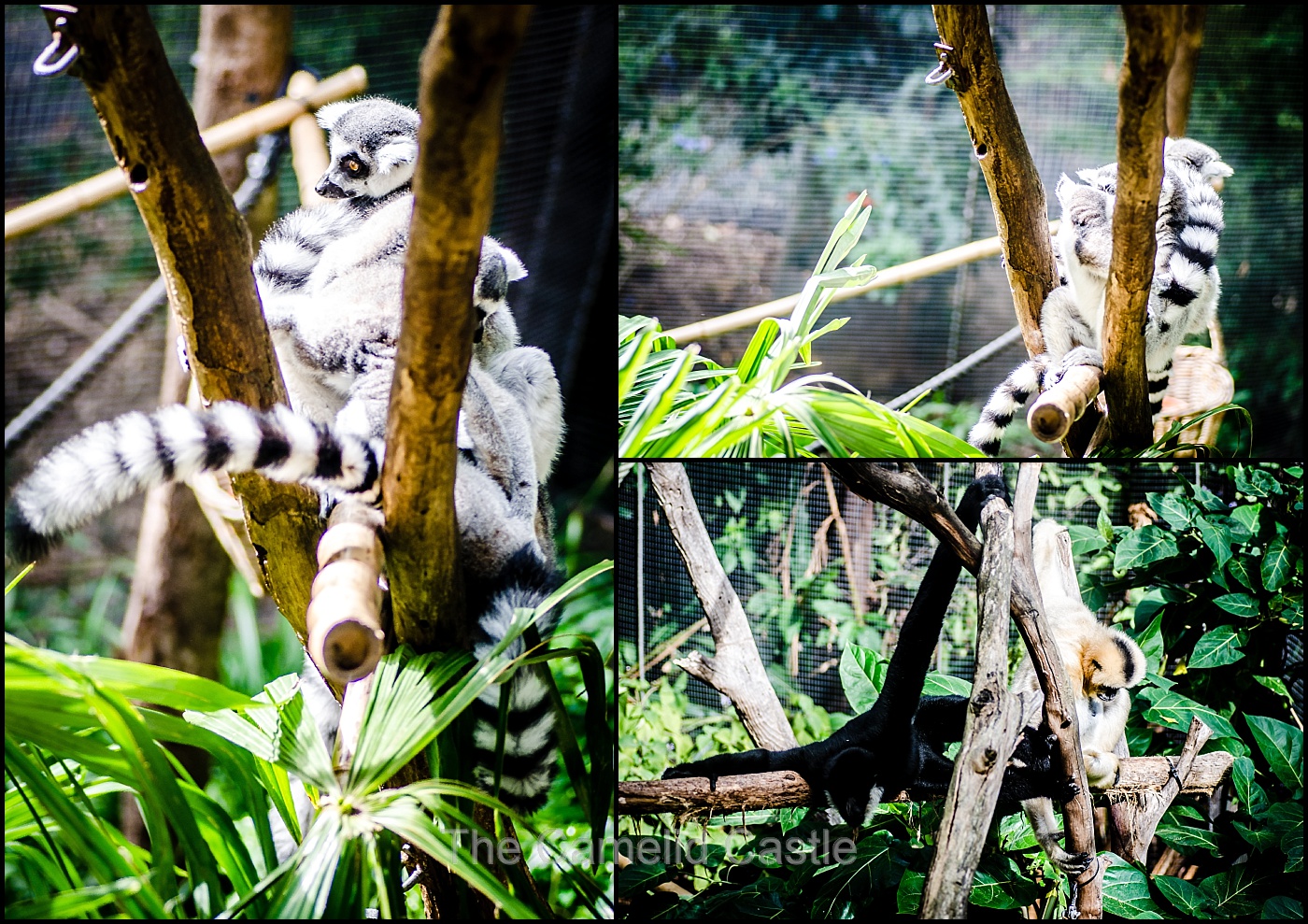 At about 1pm Astrid had had enough.  We were wandering through some nearby exhibits on the way back to the gate to catch the tram and she was not at all interested in the snakes and frogs (despite normally liking them) and flatly refused to go and see the bears, that were nearby but one of the last big things we hadn’t seen.  Astrid was requesting to ‘go back to the hotel for a nice warm bed’.  We had to oblige!  On the way out we wandered through the gift shop and let her have a look at the animal toys.  We said since she had been very good she could pick one animal to take home.

For weeks she had been talking about going to the zoo but didn’t pronounce z’s properly at the start of words (despite saying them correctly within words). So zoo, came out as loo and zebra as lebra. We also get lipper for zipper and so on…… It was quite hilarious that she had been talking about seeing lebras at the loo, very cute!  During our walk around the zoo she had started saying zoo correctly and then went and picked up a zebra toy and said ‘zebra’.  After that we figured that the zebra had to go home with us.  We were promptly instructed to pay for the Zebra so we could go on the tram…..So Zoe the Zebra was her new best friend and has been sleeping in her cot ever since!

Back at the hotel Astrid promptly went to sleep in her cot (with Zoe tucked in with her) and Anto decided to go back and wander the markets without a bunch of chatty women in toe as he wanted to look at some polo shirts.  He was also keen on picking us up some coffees from a good looking coffee place at the markets.  He did find his shirt but we won’t talk about the fact that his Melbourne shirt, actually had ‘Sydney’ written on it, and he didn’t notice until I pointed it out to him on the Monday when he was wearing it. On the upside the coffees were great and the cafe was only a short walk from our hotel, so it was still hot when he bought it back for me.

After some sleep Astrid woke up, in a much more refreshed state and we decided to make the best of the nice weather and headed back into the city on foot.  I had spied some nice shops in our wandering the previous day and was keen to go back and have a better look. We also felt some walking wouldn’t go astray to offset all the food we were eating.

The previous day we had walked through some arcades that so closely resembled some we walked through in Paris that it was freaky. April had informed us they were in fact modelled on the Paris arcades ‘Le Passages’ so we weren’t mistaken.  One of the shops I was keen to visit was a toy shop that was very similar to some we had visited in Europe.  Astrid and I had a good look around and found lots of gorgeous things, including some beautiful wooden kitchens that we both wanted to take home but decided to leave behind.  I wonder if they do internet orders?

We then decided to visit Haigh’s chocolate shop as we had walked past but not gone in the day before.  We all love chocolates and figured it would be wrong not to try some so we ended up deciding on some choc coated coffee beans and choc coated licorice for the adults and some dark choc/mint frogs for the toddler (and adults). Astrid was excited to be told she could have a frog for dessert if she ate her dinner.

We then had a wander through Bourke street mall and through the Myer store, which is incidentally much more impressive than our ones here.  We had decided on Chinese from China Town for dinner and it was approaching that hour (for the little one anyway). The adults weren’t the least bit hungry so we planned to grab some takeaway and head back to our apartment and let Astrid have her dinner and get to bed at a reasonable time and then we would eat later at our leisure.  We wandered China Town for a bit and found a restaurant that was open, had an interesting menu and did take away. Jackpot!  Deciding on a few dishes we placed our order and then commenced keeping Astrid entertained for at least half an hour until it arrived.

Despite the long wait……… which Astrid didn’t mind since she was happy to walk up and down the streets with Anto looking at all the lions (pictures, stone ones, it didn’t seem to matter!) but I was getting quite weary and it was getting cool standing outside with the stroller. Eventually our food arrived and somehow Anto had ordered a mountain of food for 2.5 people. I’m not sure who he thought he was feeding!

We strapped Astrid in and headed back to the hotel as she munched on spring rolls (which to our horror she had told all the staff at the restaurant were ‘sausage rolls’). Given they were vegie spring rolls there was definitely no sausage in them!  The spring rolls were fabulous and and we all scoffed a few as we walked back. Somehow we ended up walking uphill and into a ferocious wind but we eventually got back, weary and ready for some rest.

Astrid thoroughly enjoyed her dinner and kept telling me ‘nice dinner, mum’.  Since I had little to do with it I’m not sure I could take the credit, but I’m glad she approved. She also thoroughly approved of that chocolate frog too! 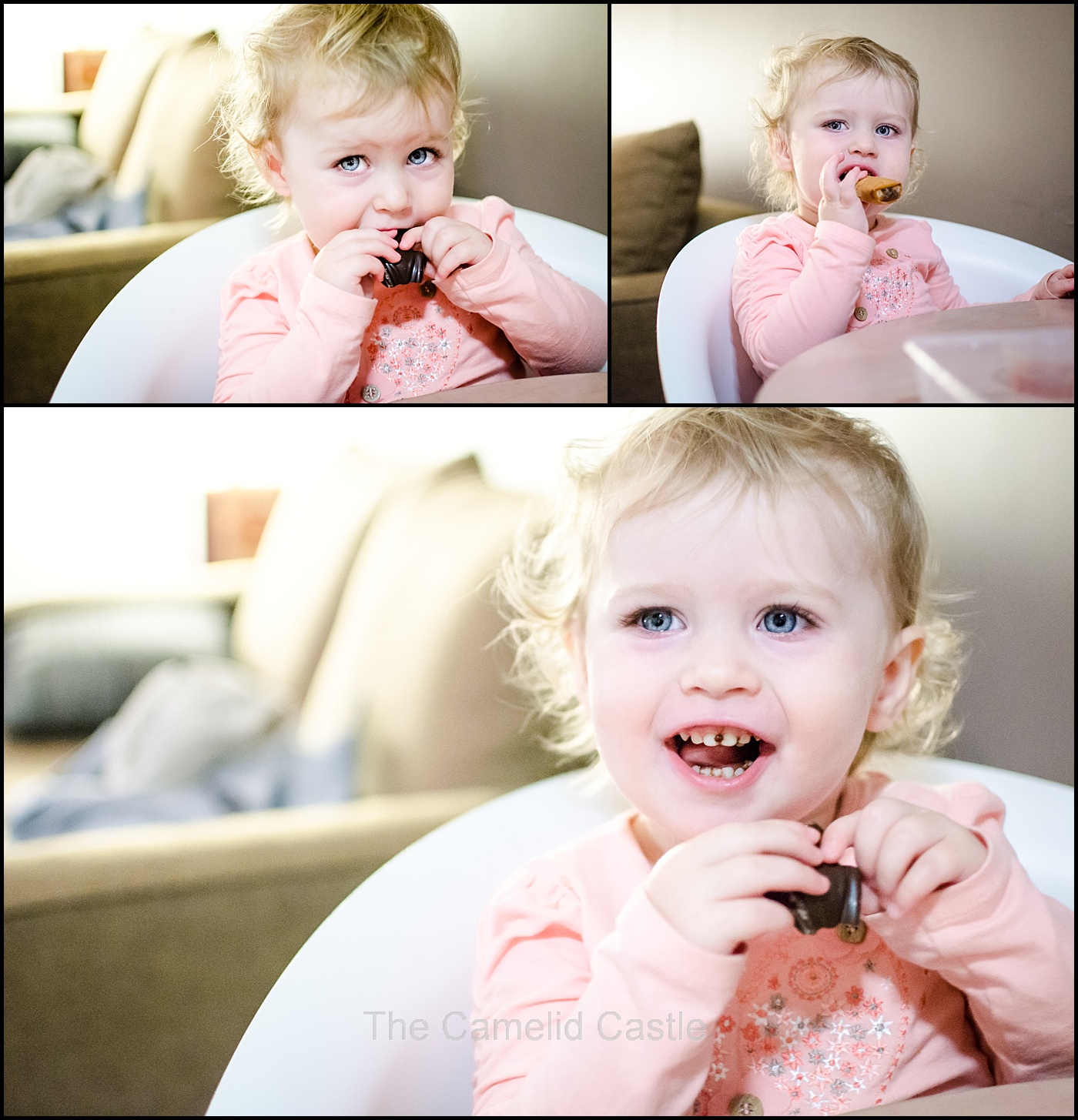 Finally she was all tucked up with Zoe the Zebra ready for a big sleep.  She did tell us that she ‘had a fun day’……… glad we pulled that one off 🙂 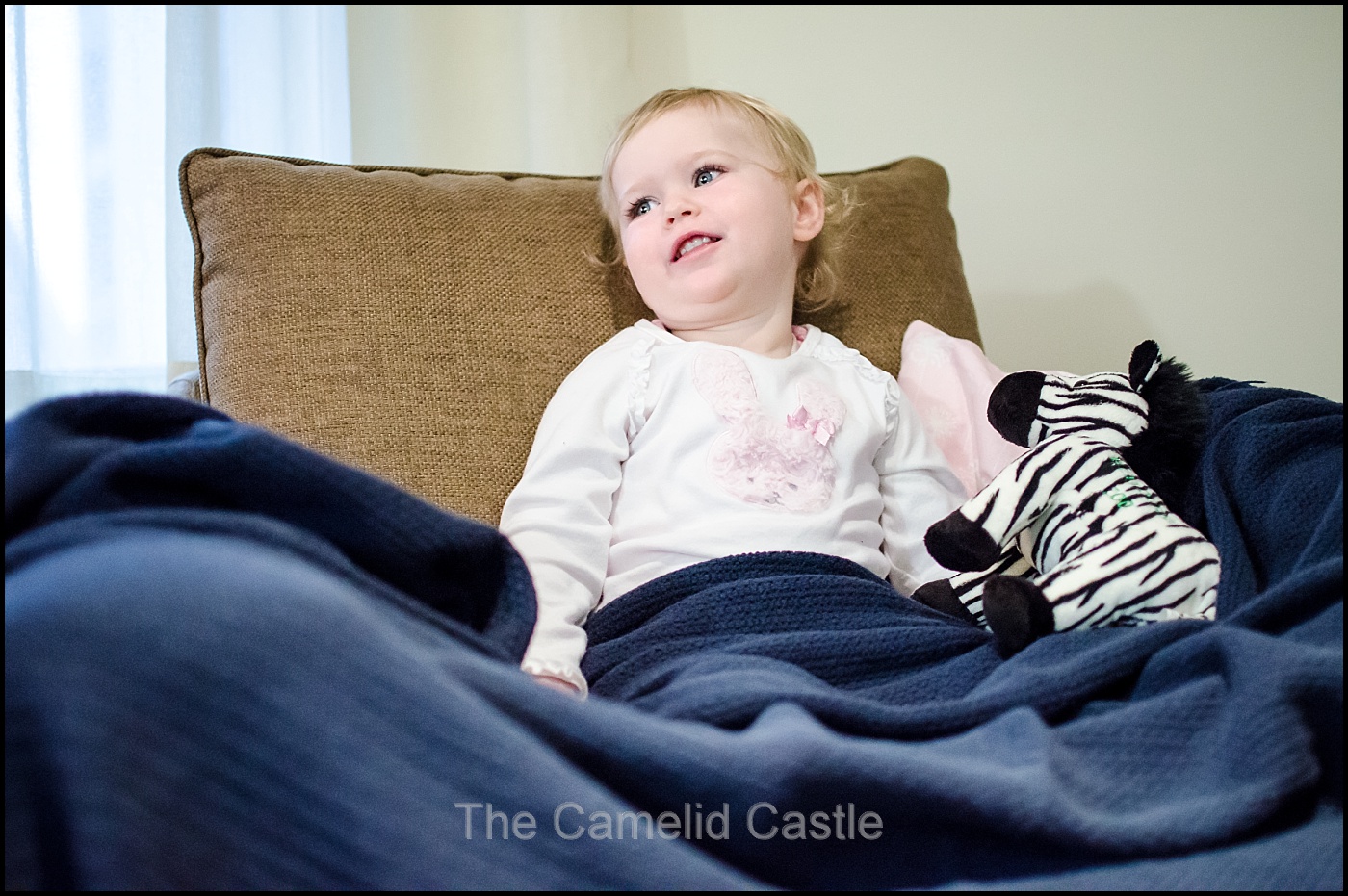