After a much improved nights sleep for everyone we woke up to another lovely day and decided to head to St Kilda for some Sunday breakfast and a look at the markets that are held along the Esplanade on a Sunday morning.

Before departing our hotel we had looked up the trams and had figured we had to hurry to make the next tram but we should have enough time. Of course the tram was about 1.5 minutes early and we missed it by about 10 metres, necessitating a 25 minute wait at the tram stop.   We finally made it onto the tram and headed to St Kilda, keeping a hungry Astrid entertained with lots of sight seeing.  Once in St Kilda we wandered up and down the main street to pick our breakfast location. It was still early and relatively quiet.  We’ve eaten at a couple of the cafes before but we picked a different one that looked like it was quite popular and sat down to a nice hot breakfast.  Astrid enjoyed her babycino and some of our hot breaky and feeling much warmer and fuller we decided to check out the cake shops up and down the street.

There were plenty of great cakes to pick from and despite just having had a big breaky we figured we could stash some cakes in the stroller to take back for morning tea.  Astrid had her zebra with her, and zebra had a wonderful time picking out all the cake Astrid was going to eat. Cakes safely purchased we headed back to the esplanade for a look at the markets. 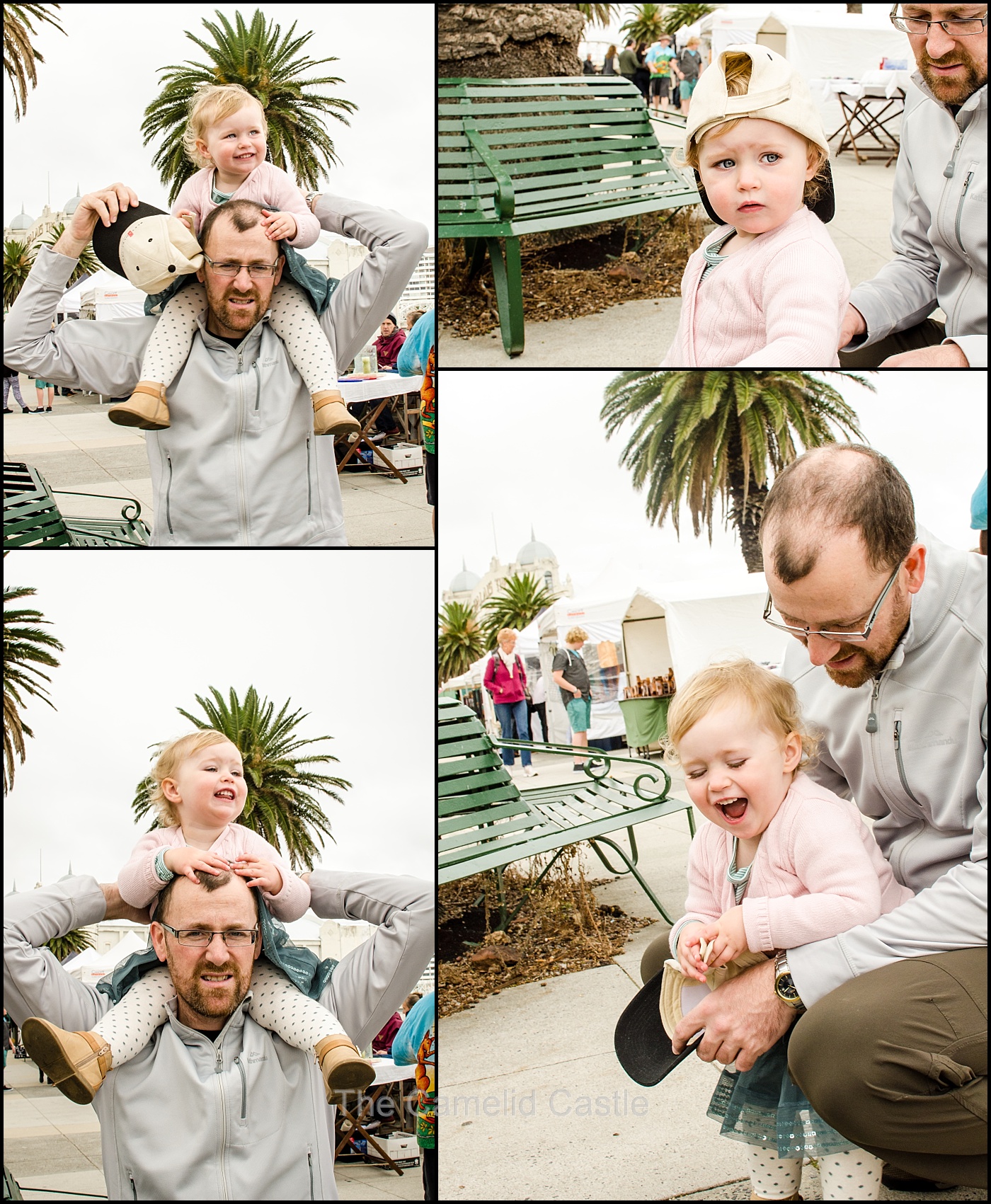 Despite it being well after 9am many stalls were only just setting up and it was very quiet. Quite a contrast to previous times we have been to the markets.  We did wander up and down and let Astrid have a bit of a walk but we didn’t end up buying anything. There were a few cute things but we obviously weren’t in a shopping mood. We did enjoy looking at the stalls and patting some cute dogs along the way and Astrid had fun having some shoulder rides and wearing Anto’s hat. We had planned to walk down to the beach and have a play at the park but it was quite windy and looked like it would rain any minute, so we instead jumped back on a tram and headed back to the hotel.

Astrid found room for some of the left over spring rolls and Chinese take away from the night before and was looking quite weary so had a nap. The adults decided on some book reading in the warm, accompanied by some take away coffees from the nice coffee shop down the road.  After a couple of hours of rest it was time for our St Kilda cakes (very yum, but not quite Paris standard) and to head to the aquarium for the long awaited penguin visit.

We caught the train to the nearest station and still somehow ended up walking the wrong way to the aquarium despite having been there before and theoretically knowing where we were going.  We eventually made it and it was very busy and chock full of small (and loud children). It was quite late in the afternoon but we knew we weren’t going to spend more than an hour or two there so we had plenty of time to look around.

First up were the penguins. The penguin exhibit is quite good, although when we first got there it was very busy due to a tour going through. Astrid was extremely excited to see ‘big’ penguins up close and we spent quite a bit of time watching them waddle around, clean themselves and generally be cheeky.  Here is where the photos get very dodgy as unlike most of the other people we don’t use flash around animals and it was quite dark and contrasty.  While not the best shots you can see how big the King Penguins are and Astrid was very impressed with them. She also loved watching them dive in and out of the water and would have happily stayed and watched them all day.

We finally dragged her away from the penguins (pretty much kicking and screaming) until she discovered the rock pools she could play in, touching all the shells, sand and sea stars. That was a huge hit……toddlers, water and sand, what could be better? Again after quite a play we had to drag her away so we could let other kids have a go and see some of the other exhibits.

Next were the seahorses and weedy seadragons and then the big central tank with lots of fish and corals. We had fun watching some eels and big fish swimming around the tank and Astrid was quite impressed with how close she could get to some of the fish.  We then headed to the shark exhibits, which were extremely busy still. We spent quite a bit of time showing her the big rays and sharks swimming around.  Eventually the crowds thinned a little and we got a better look.  Again terrible for taking photos, but we had fun. Not as much fun as when we get to snorkel and dive with sharks, but not bad for a dry land adventure. 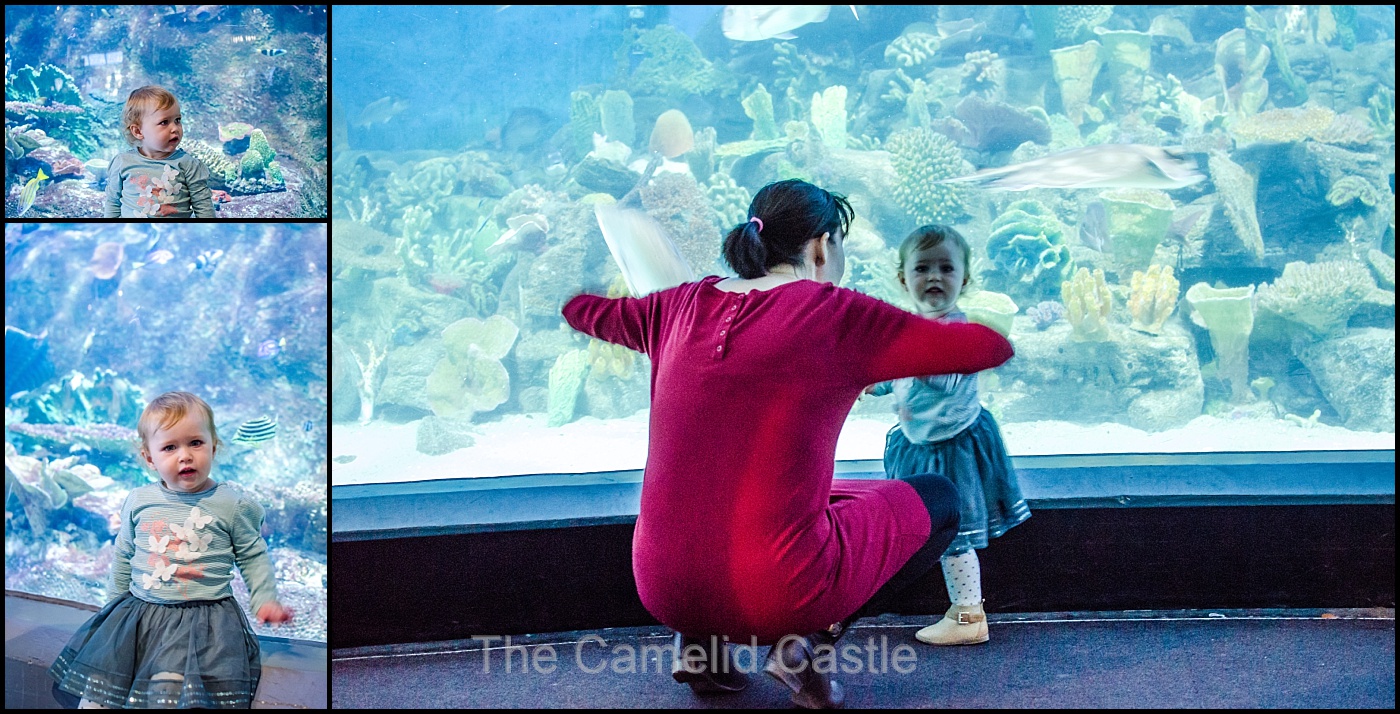 It was getting late but had finally quietened down so we decided on another visit to the penguins and rock pools. We caught the jellyfish exhibit on the way through and made our way back to the penguins.  They had started turning the lights down and the penguins were all starting to put themselves to bed. We had fun watching them get ready for their sleep and have their last swims of the day and got some slightly better photos of them.  After about half an hour more with Astrid’s new favourite animal we let her have one more play in the rock pools before drying off and heading out for some dinner. 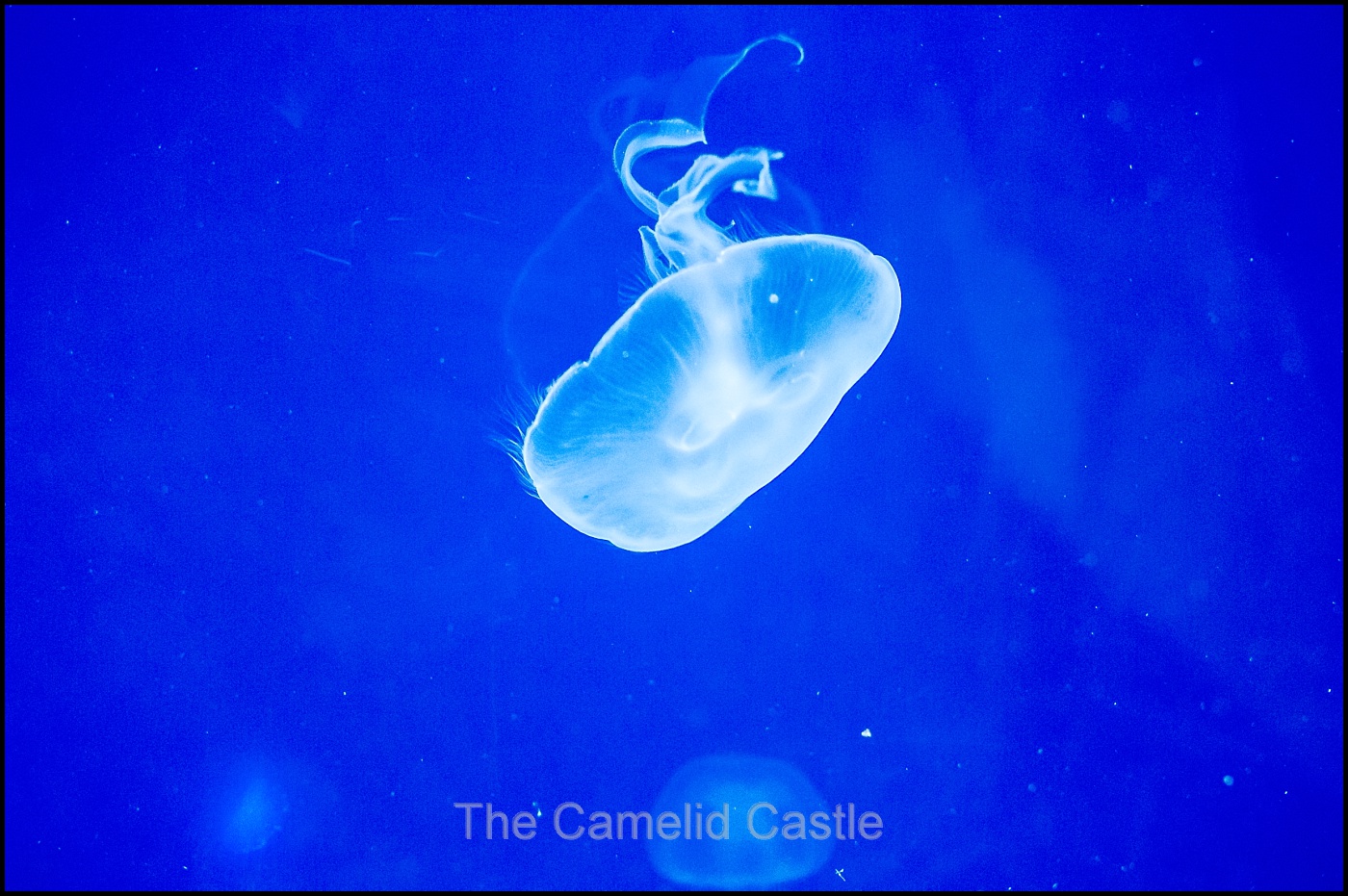 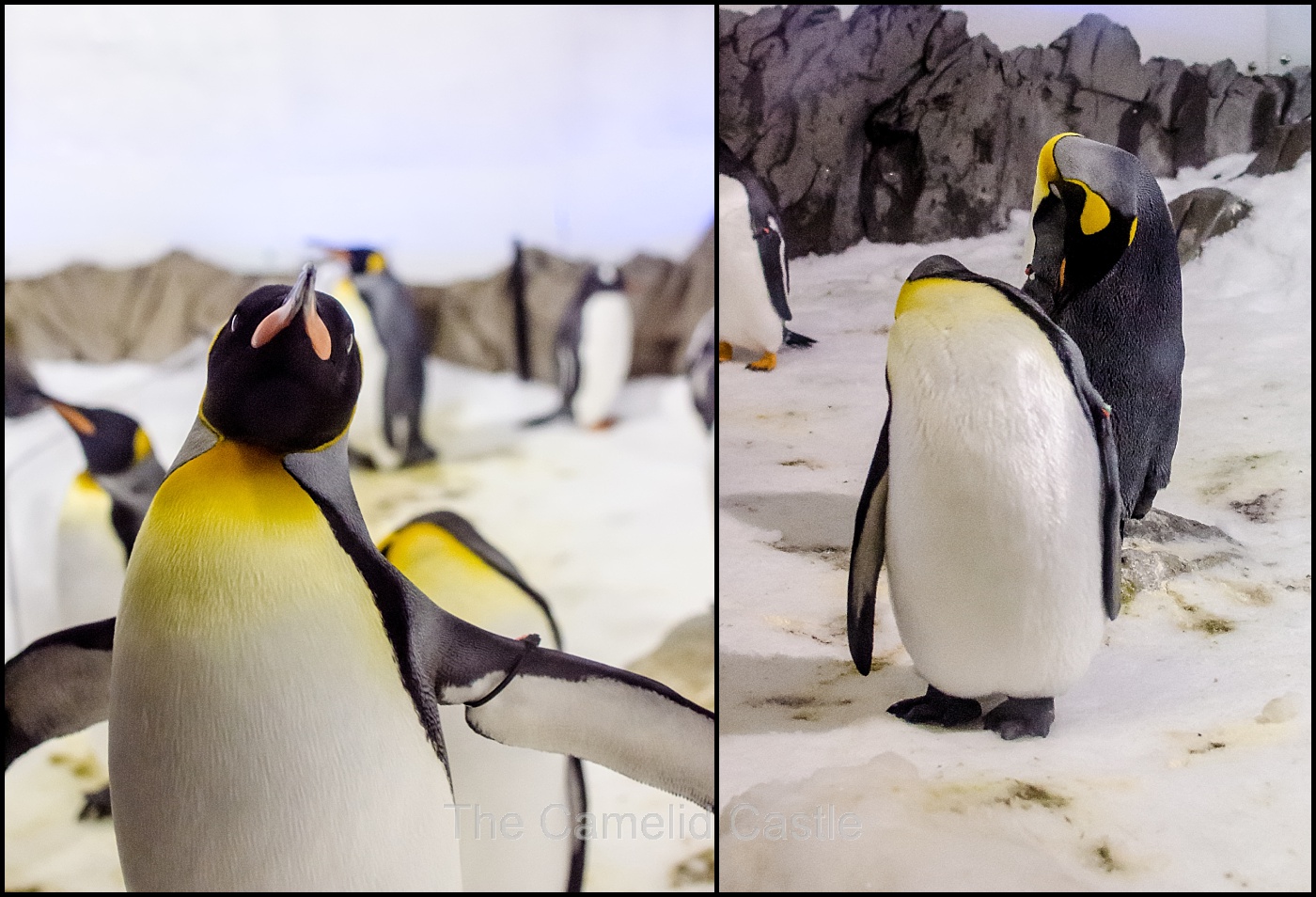 We had a pleasant walk from the aquarium over the Yarra towards the Crown Casino complex. We stopped to take some photos on the bridge and enjoy the end of another lovely day. Astrid was getting hungry and we had promised her some pizza so we headed into Crown and tried to find the pizza place Anto and I had eaten at several years before and had fantastic pizza. In the end we couldn’t find the one we wanted but settled on another place that looked decent. We all shared a lovely vegie pizza, not as good as the one we remembered, but Astrid certainly wasn’t complaining. 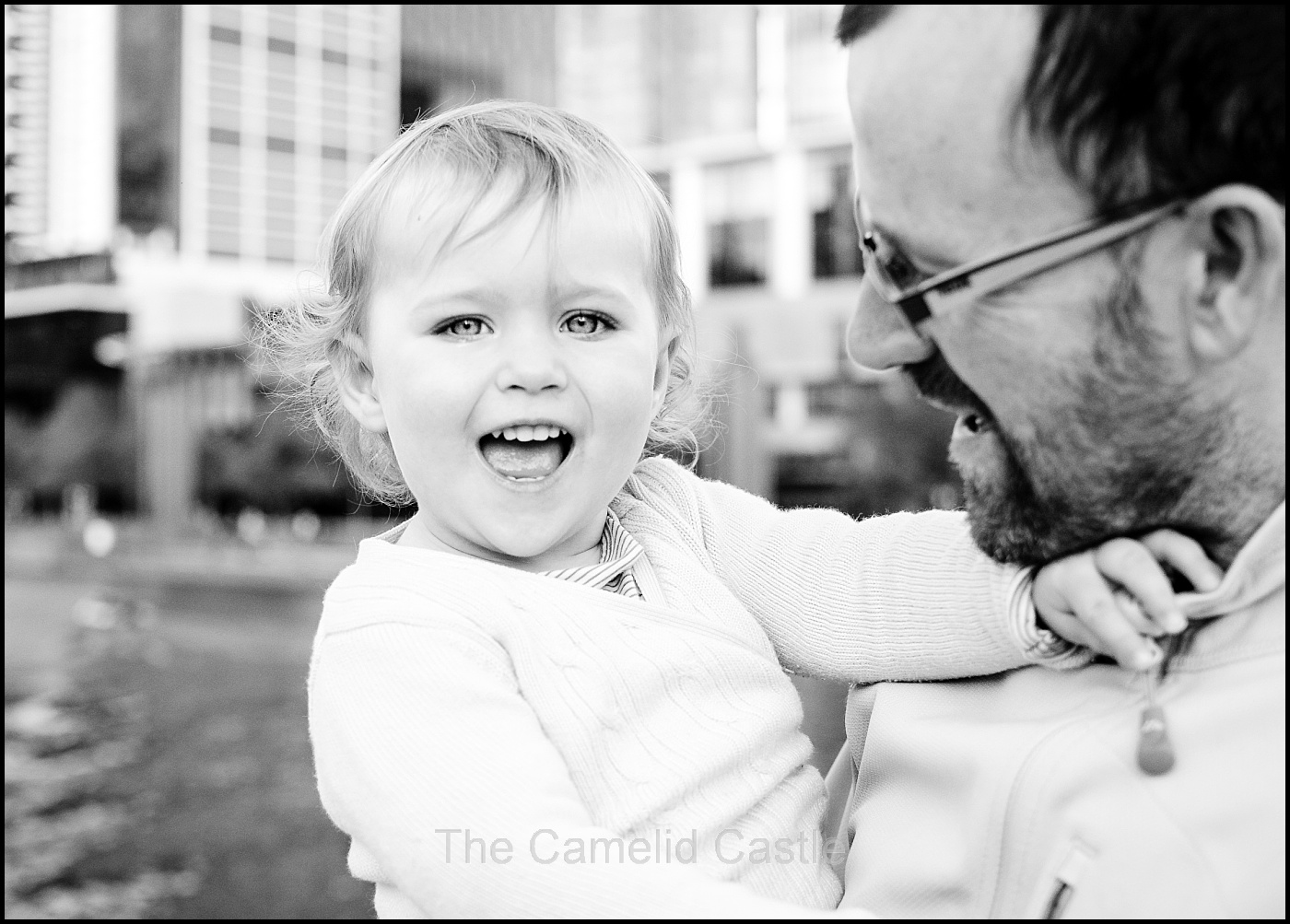 We then had a quick walk around to show Astrid the lights and fountain in the atrium and headed back outside for some gelato.  Although none of us needed dessert we figured it was our last night in Melbourne and some icecream wouldn’t go astray. We’d walked past a couple of nice looking places on the way in so selected some icecream and decided to eat outside and watch the people going past and the light show from the big gas burners. Astrid turned out to not be a fan of the gas burners but did love the icecream! While she has had plenty of icecream before this was the first time we had given her a cone.  It was a bit messy but worth it for the grins. 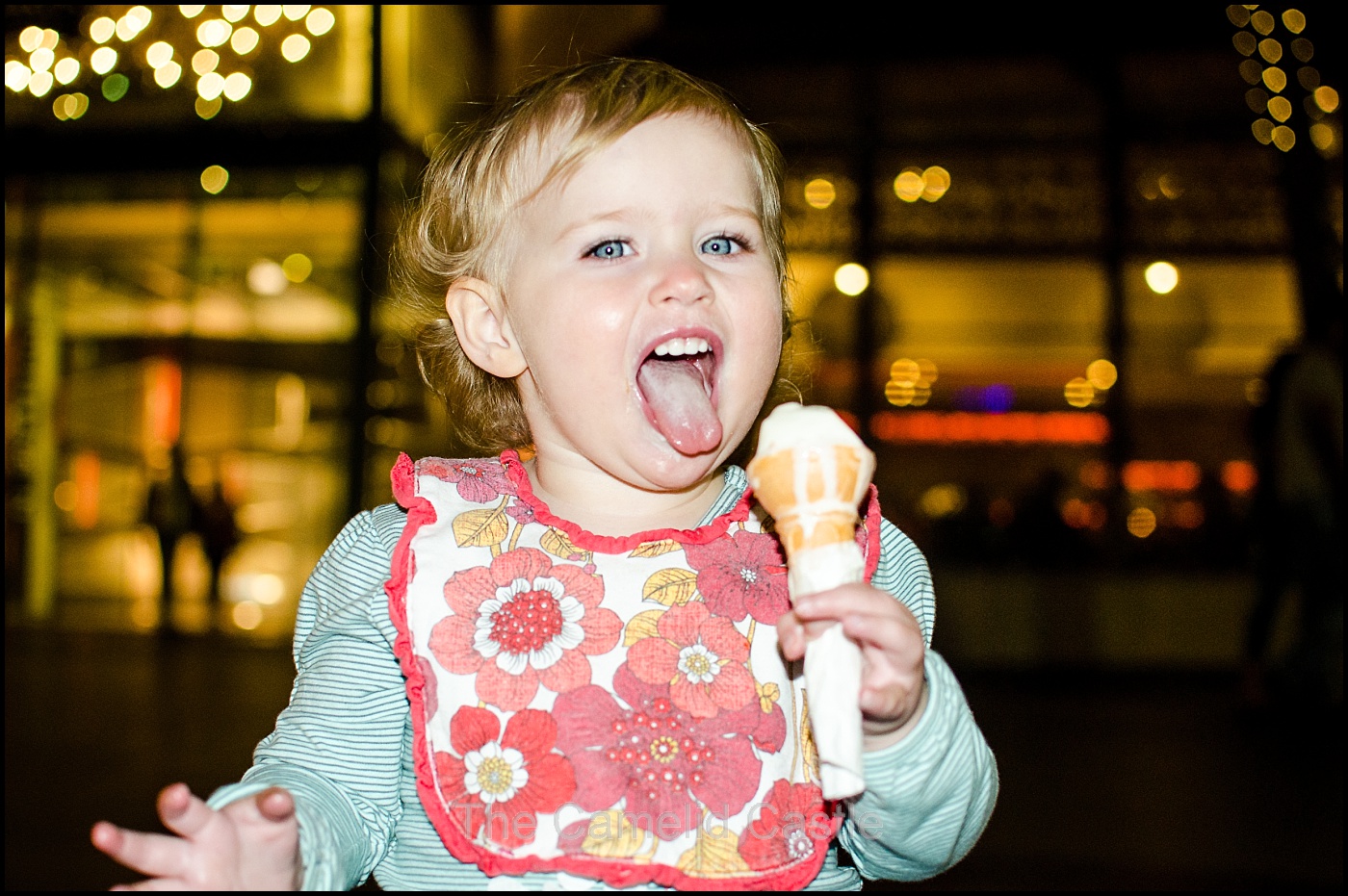 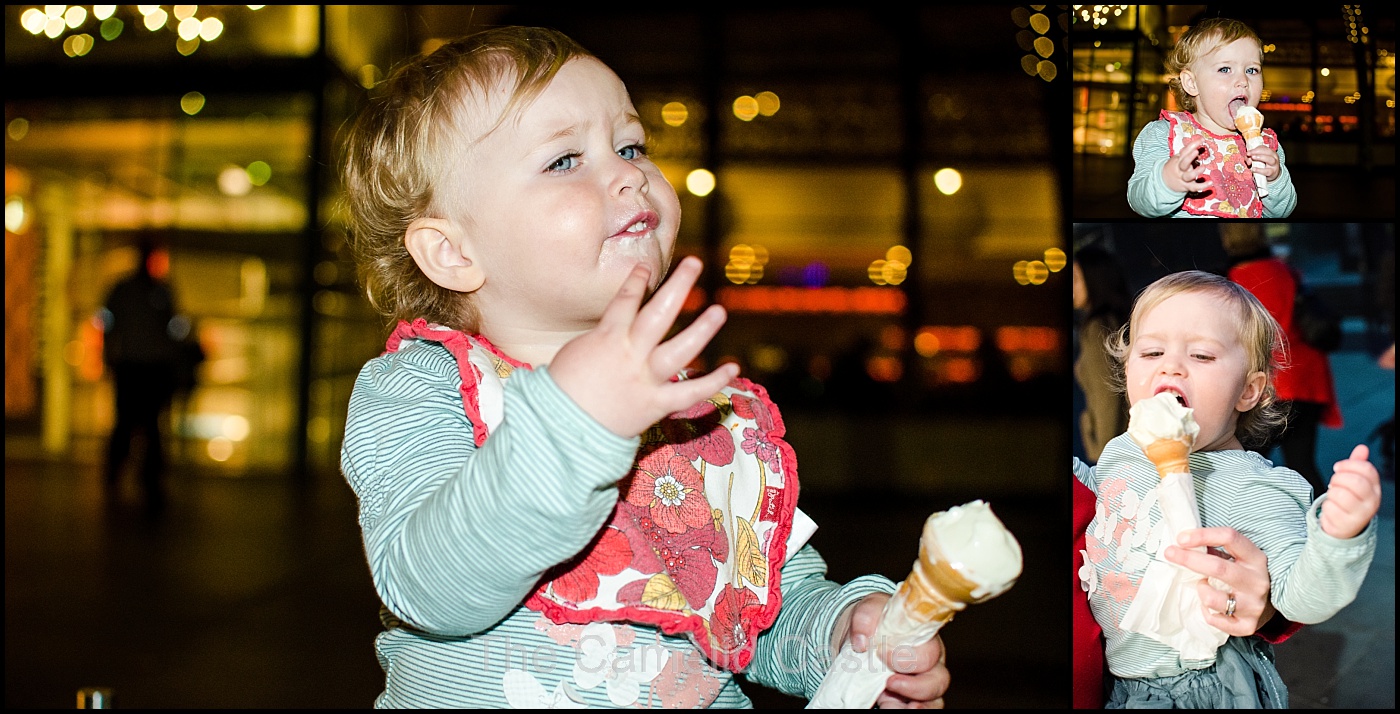 All getting a bit tired and cold we headed for the nearest tram and made it back to our hotel with only enough walking to burn off about one third of the icecream.  It had been another long day but Astrid was excitedly chatting about the penguins and telling us how we had all eaten icecream together, and how lucky she was.  Sounds like we got high marks for yet another day!