Our final full day in Prague was a bit more relaxed. We planned to explore some parks and then head over the bridge and check out Mala Strana and Kampa Island. We also had to indulge in the cheap food and beer before heading off to (slightly less cheap) Vienna for New Years!

The kids decide to end the run of ‘sleep ins’ and were up before 7am. This did give us plenty of time for a bacon and egg breaky and to get organised for our last day of sightseeing in Prague.

We headed out via our usual walk down the hill to the local tram stop.  The first stop for the morning was Riegrovy Sady Park, which was in an area of Prague we had not yet explored.  The walk to the Park took us through some interesting streets, with some lovely buildings. 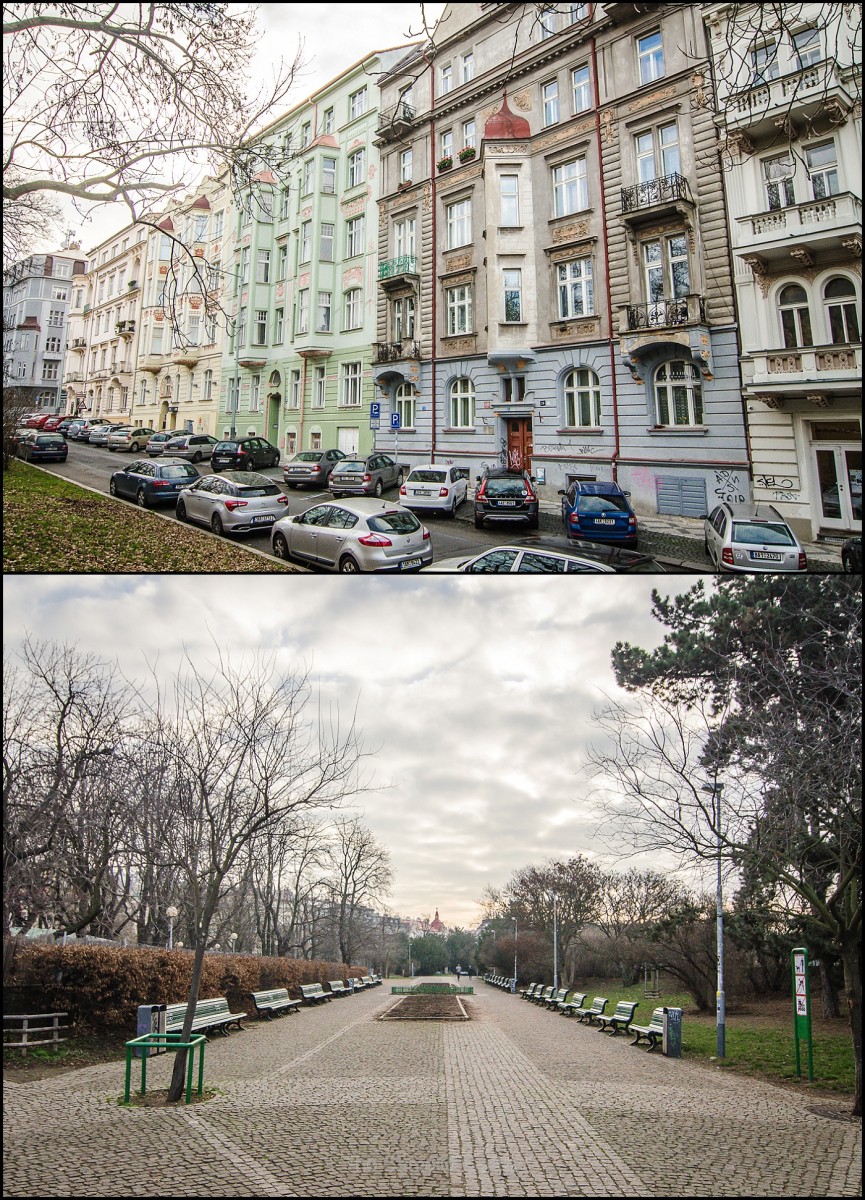 The park is quite pretty and had nice views over Prague.  There were lots of people walking dogs (which made Soren happy) but we couldn’t find the promised play equipment and none of the cafes and pubs were open. It is a really pretty park, but probably more fun for the kids during warmer weather. We had a walk around and enjoyed the sunshine and then decided to head back into the city.

As we are heading out of the park, we realise that we are quite close to central station and decide to walk down that way and figure out the best way of moving our bags there. Yes, thoroughly exciting, but necessary when moving a heap of luggage!  There are also some cool buildings not far from central, that we hadn’t seen when we’d arrived through there, since it was very dark already on our arrival evening. 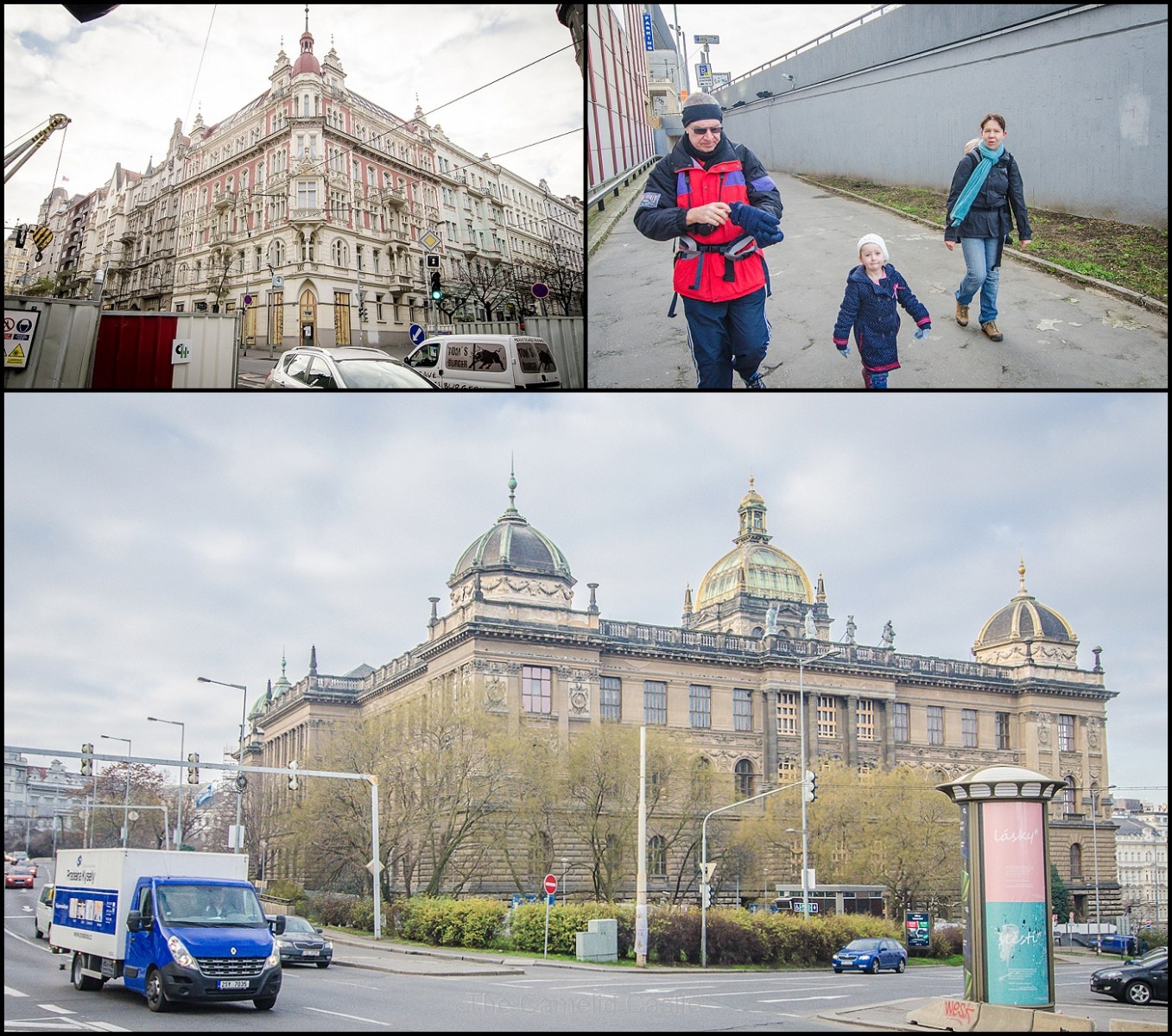 Our conclusion was that despite a nearby tram stop being close to central, there was no easy way of getting the bags along the busy road so we’d transfer to the train for an extra stop.  It was a handy bit of research, and we did get to see the train station in daylight.  I am weird and like to take photos of train stations.  I think that lots of them look really interesting.

Since we’d had a bit of a playground fail with Riegrovy Sady park, the kids had been disappointed that they hadn’t had their promised play.  Soren had been chanting ‘playground, playground’ all morning. We walked out of central station and on our way down to the tram, Soren spies a pretty nice looking (and fenced) playground.  We head over for a play and the kids have a ball on the flying fox and swings. There was also a ship you could climb in and several animals you could ride on. The kids were in heaven.

Neither wanted to leave, but we couldn’t stay all day.  When we suggested leaving, Soren started persistent requests of ‘one more go’. After more than one more go, when we did leave he totally cracked it and I got to carry a sobbing toddler out of the playground.  He was crying so hard that strangers were looking concerned.  We eventually calmed him down with several gummi bears, but it took quite a while for the sobbing to stop.

With a distraught toddler, we head via tram to Mala Strana (the Lesser Quarter) which is on the opposite side of the river to the Old Town. We’d briefly walked through this area the previous day but wanted to have a longer explore.  First on the agenda was finding somewhere for morning tea as we were in need of warming up and some coffee.  The area around the tram was filled with beautiful buildings and many lovely (and somewhat expensive looking cafes).  Since even expensive in Prague, isn’t too expesnive in Aussie dollars, we were happy to go somewhere nice…….. except everywhere turned us away as we didn’t have a booking. We walked around the corner to the slightly less posh area and nothing was yet open for lunch (it was only 11am). So were out of luck and figured we’d still be walking around looking for somewhere to eat when they all opened for lunch. We eventually found a lovely looking cafe (that was open and had tables) not far from where we originally got off the tram. 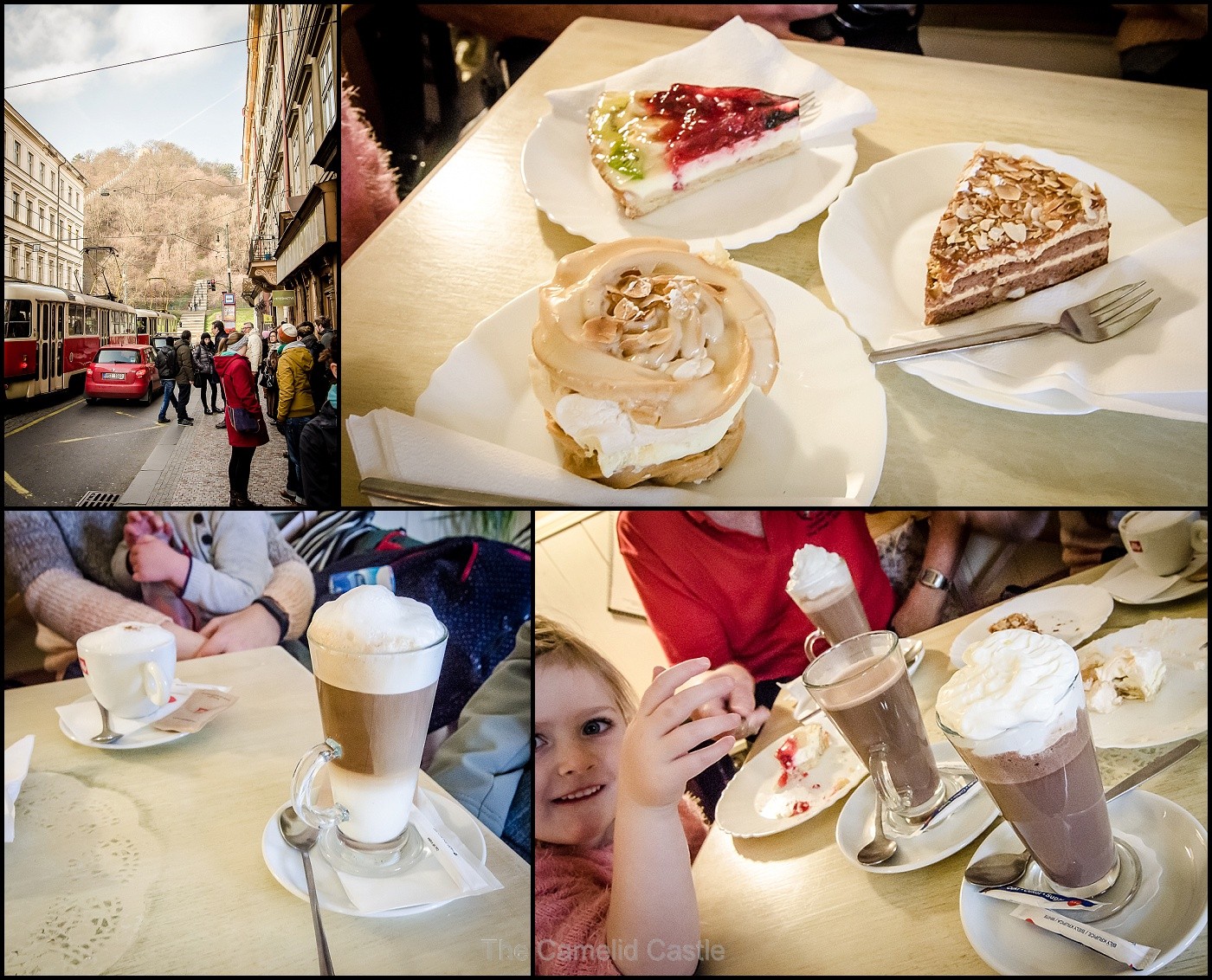 The cafe was a winner, hot chocolates and coffees for all and a bunch of delicious looking cakes to share! It also had the bonus of an actual baby change area, which seemed to be elusive many days.  Everyone was happy. The cakes were yummy and we had warmed up and were ready to go out exploring.

Shortly after leaving the cafe, Soren commenced napping in the ergo. This was convenient timing since we planned a walk around Kampa Island and along the edge of the river. Kampa is an island in the Vlatava River, on the Mala Strana (lesser quarter) side of the river. It is connected to land at the Northern tip, where Charles Bridge is. Kampa Island isn’t that large, but does contain lots of museums and galleries and a quantity of art sculptures.  After 3 weeks of travel, Astrid had decided she would take the opportunity to ‘strike a pose’ with any statue or fountain that took her fancy, and request we take a photo of it.  Sometimes the results were hilarious. 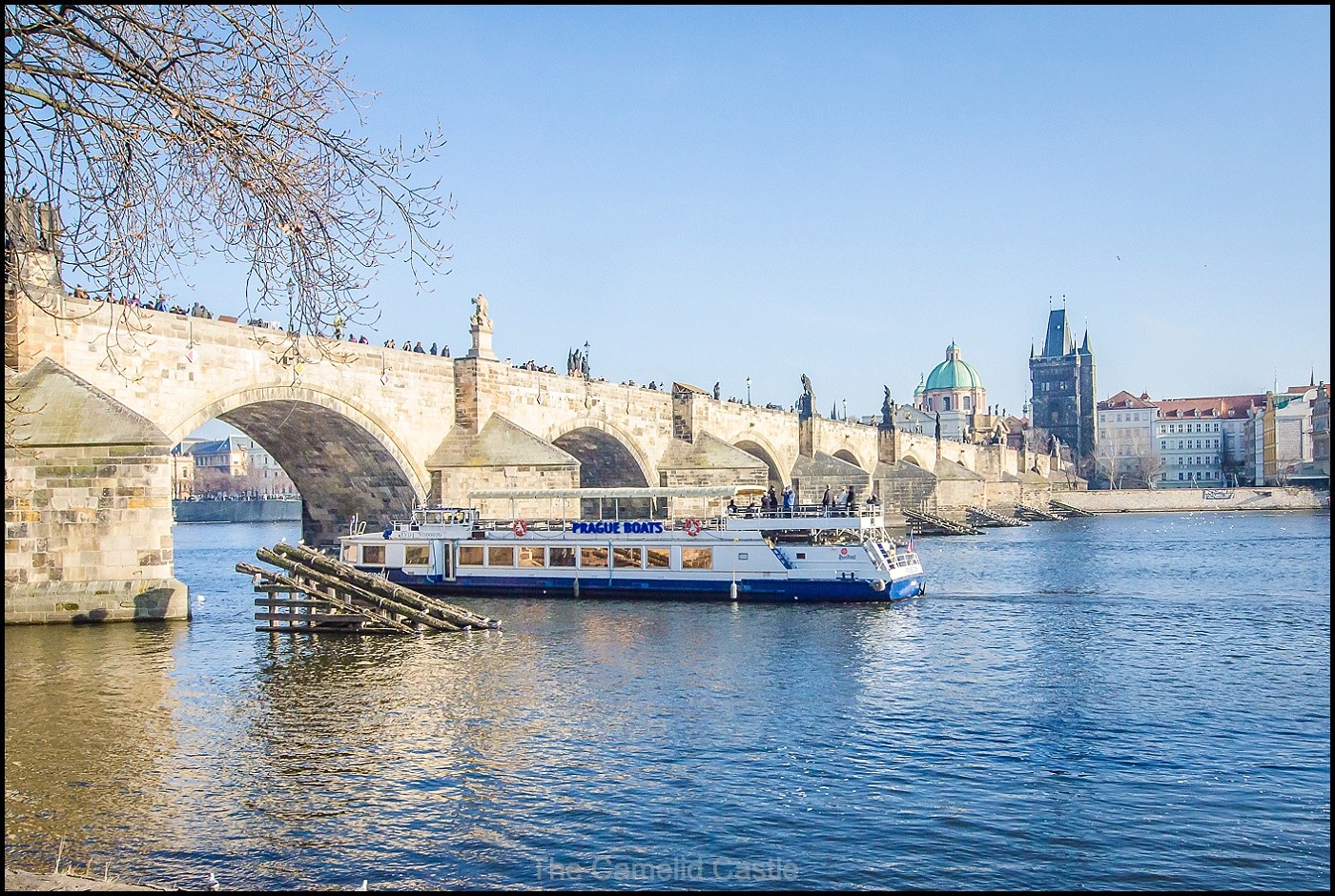 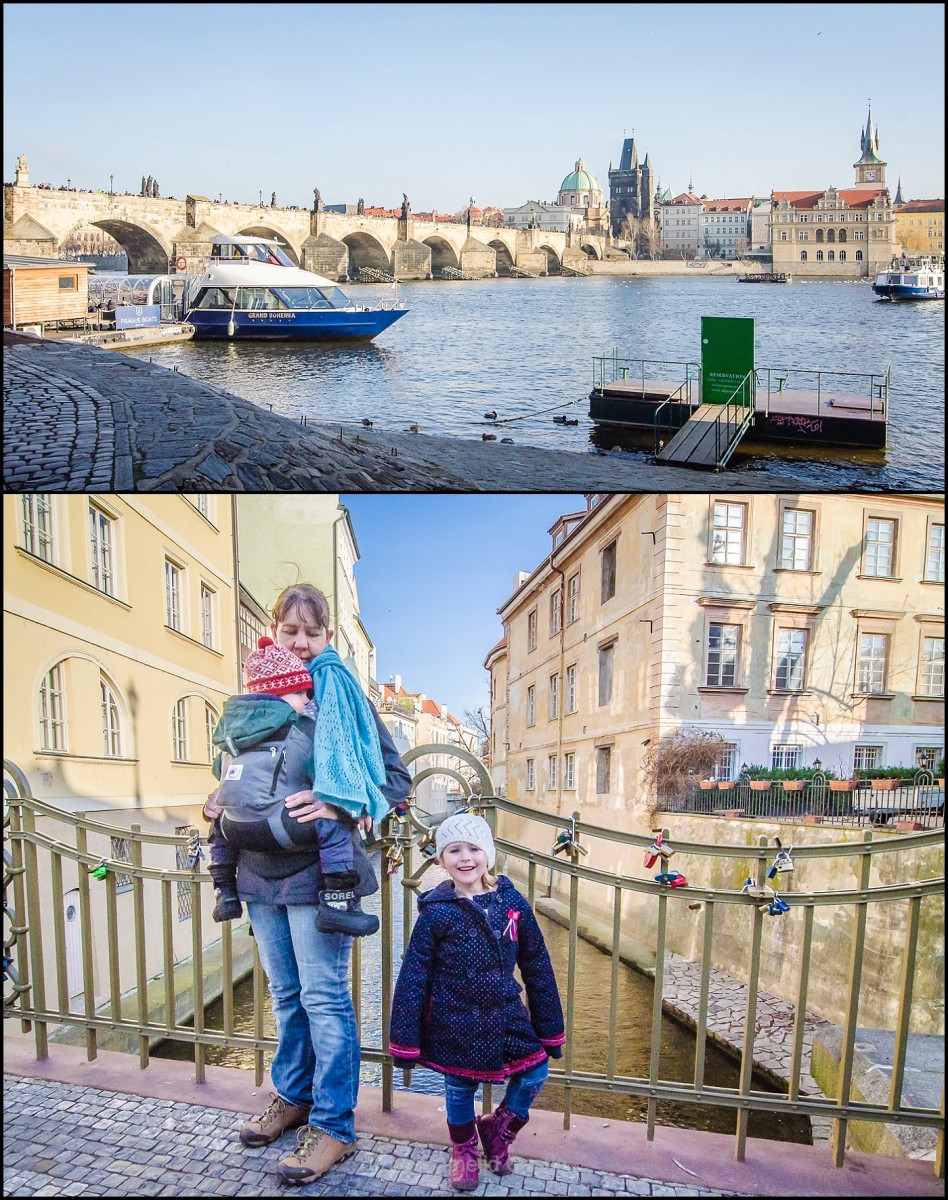 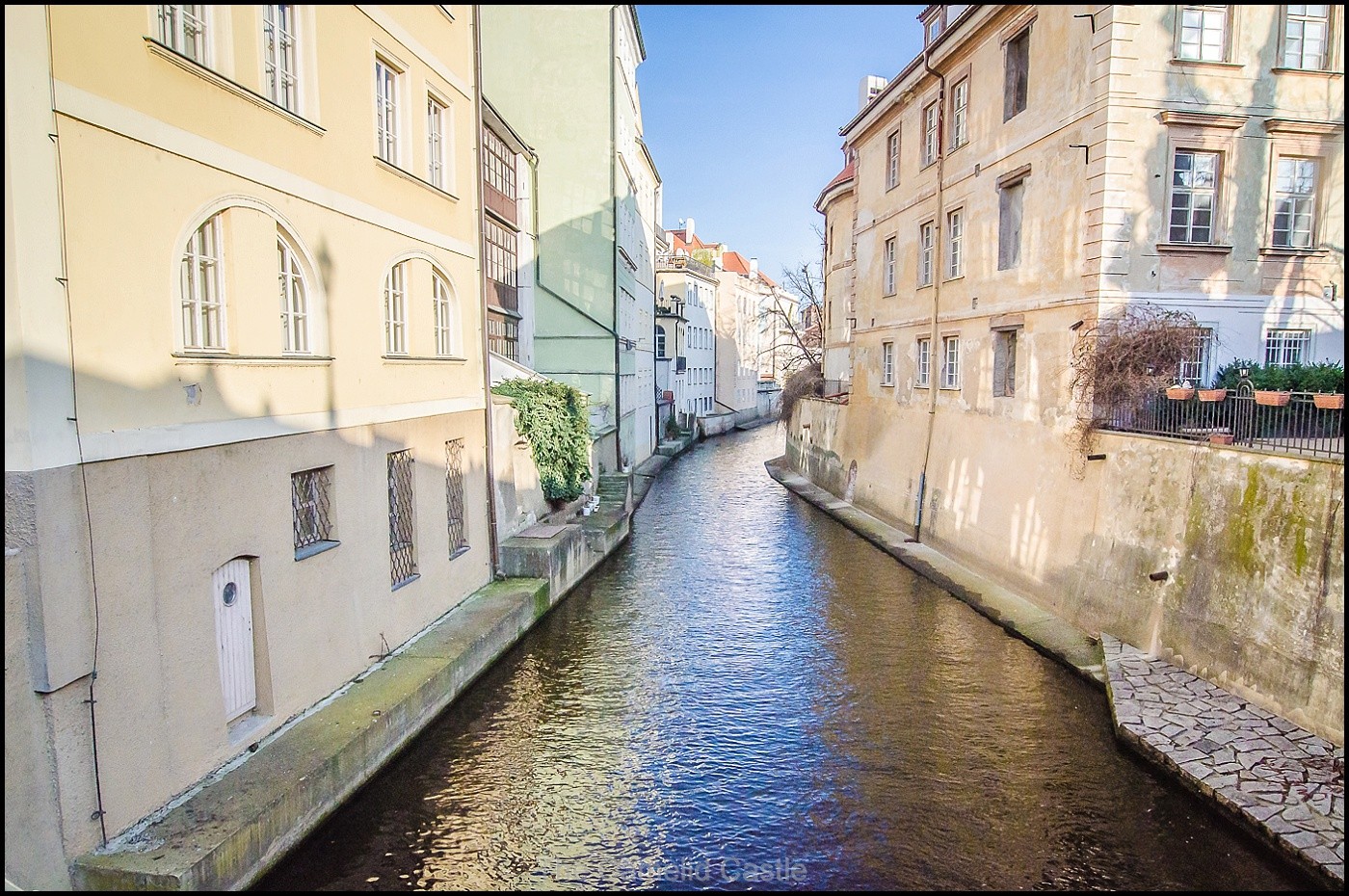 As usual, the views across the river were stunning. Where Kampa Island connects with Charles Bridge there are a number of little waterways and bridges. This was a pretty area (and full of tourists).  There were a lot of interesting pubs and restaurants but we thought we’d head back over the bridge before lunch.

We hadn’t manage to walk the full length of the bridge on our previous visits.  It was a beautiful clear day (and Soren was napping) so we figured we’d brave the tourist crush and head from Mala Strana over to the Old Town. 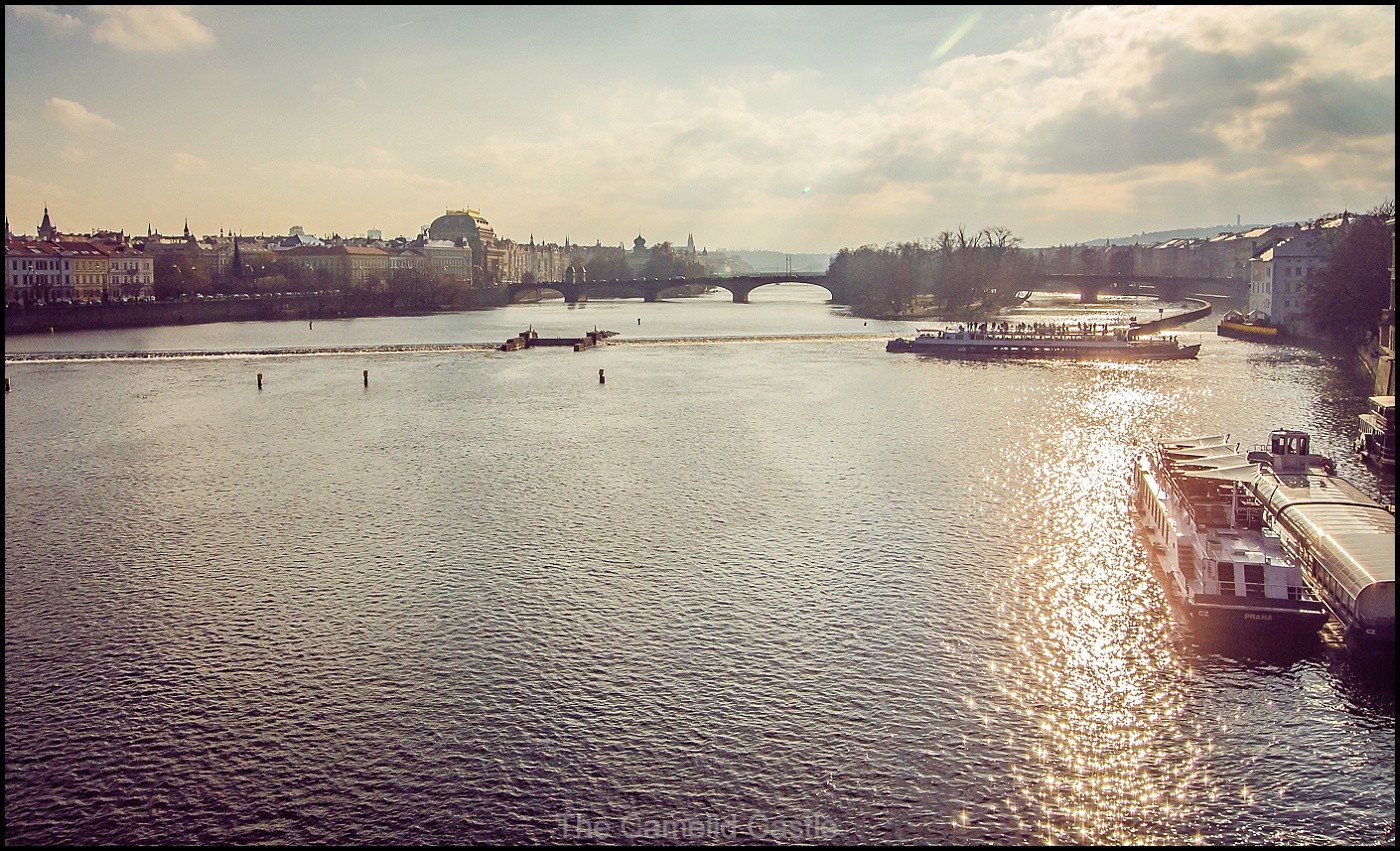 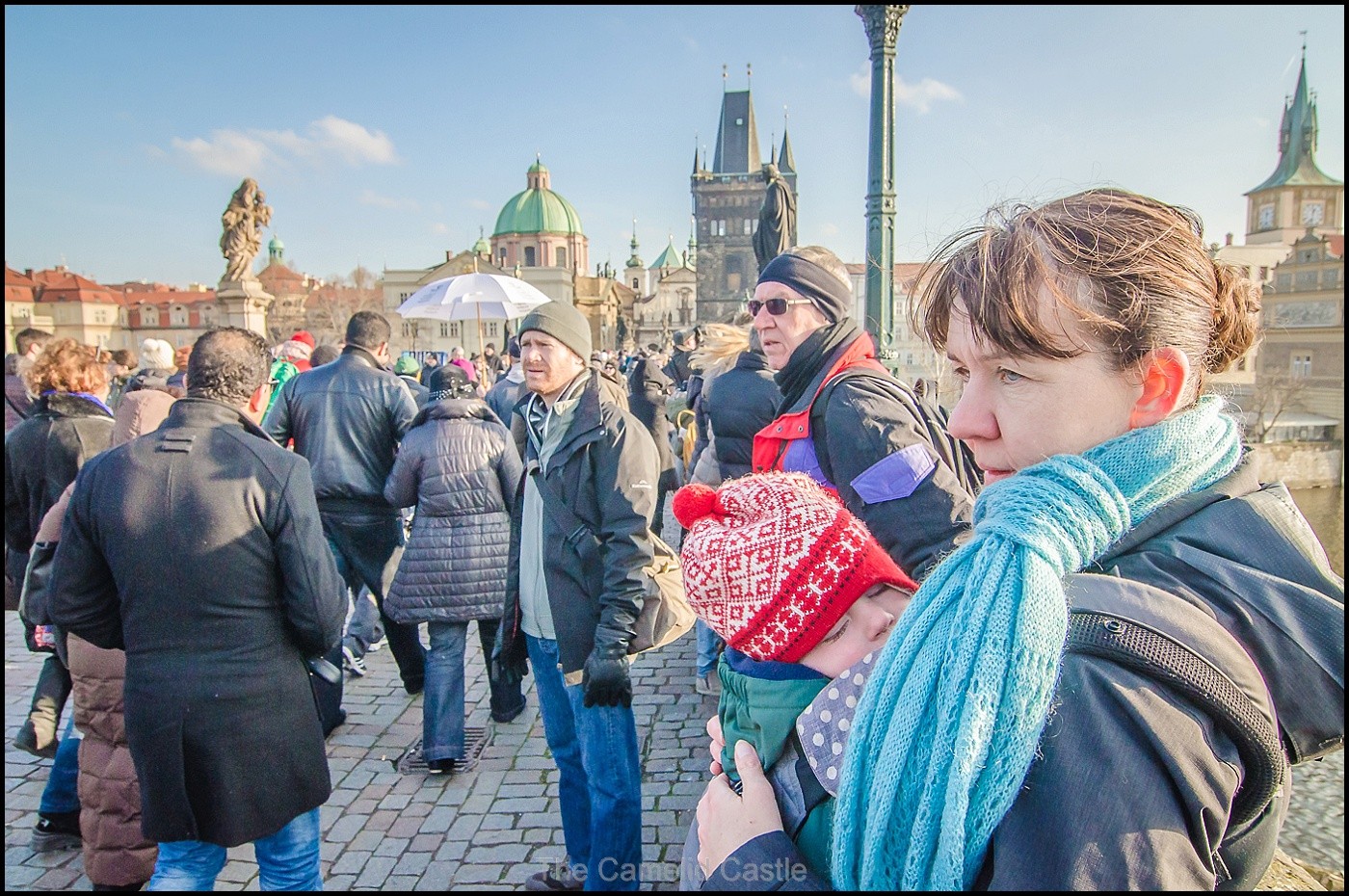 Once we hit Old Town we realise that we were missing our water bottle, and that the ‘thud’ I heard at morning tea was probably Soren dropping it under the table. As Soren was still napping, we figured we’d catch the tram back over the bridge to see if we could find it. The morning tea cafe was just outside a tram stop, so we should have been able to find it without too much trouble. Of course this meant walking up to Wenceslas Square to find the correct tram to go back to the other side of the river.  We now had (somewhat) mastered the Prague trams and managed to get to the cafe quite efficiently. Anto headed in and, wandered up to the table we were sitting at and tried to explain to the current table occupants what he was doing, but the still gave him strange looks as he ferreted under the table. Once he came up holding a water bottle they understood, or at least were pleased that the strange man was about to leave again.

Now with the water bottle back in our possession we decided to grab some lunch, since Soren was now awake. It was our last full day in Prague so we were looking for a Czech pub, somewhere in Mala Strana. Luckily there were quite a few to choose from.  We’d spotted one around the corner when we got off the tram so headed back there, and determined that there was in fact something on the menu I could eat.  It turns out that losing the water bottle was a blessing since if we hadn’t gone back to find it, we wouldn’t have found this restaurant which was a winner.

Our waiter was quite fond of the kids and thought they were rather cute.  We started our meal with the usual drink order. As usual the boys had beer, this time a local unfiltered lager. When they ordered it in a ‘large’ size, the waiter laughed and said ‘of course, small beers are only for children!’.  I tried a hot wine (the Czech equivalent to gluhwein) which was quite good. To eat I had a spinach crepe with cheese sauce (which was delicious).  Alan had a strogonoff with rice. Mikl and Anto have an old Prague square plate which was bread dumpling, potato dumpling, red cabbage, sausage, smoked pork, pork cutlet.  They said it was really good, and no one was hungry following that meal!……. although we did manage to fit in some apple strudel and cream for dessert. 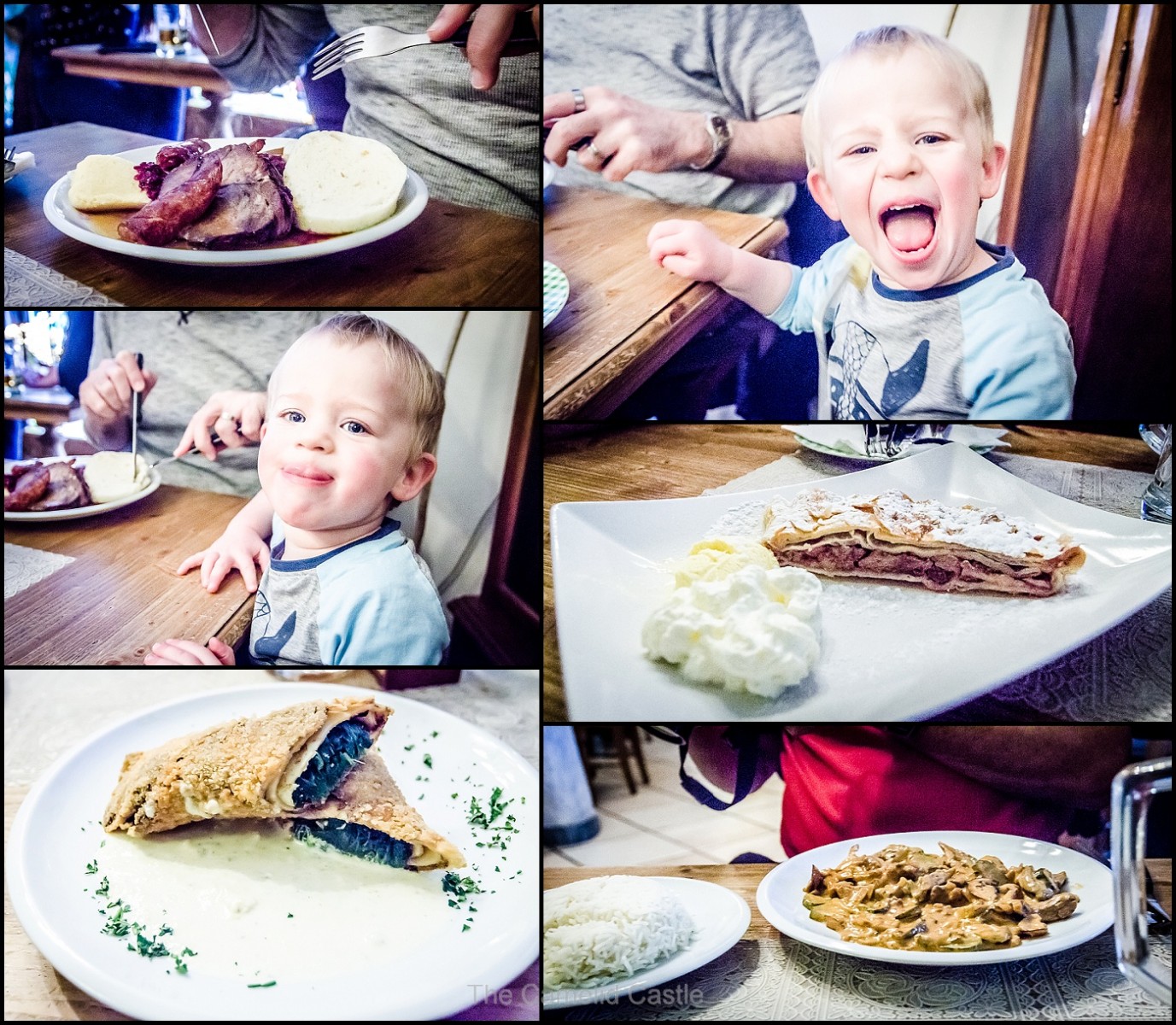 By the time we finish lunch it’s 3pm so we decide to have an easy afternoon before a big day of travel the following day. We catch the tram back to apartment, via a grocery store to pick up some supplies. The kids spend the remaining hour before sunset and dinner, playing with uno cards, and generally enjoying some down-time.

After our big (and late) lunch we all had a ‘apartment picnic’ for dinner with toasted sandwiches for all, and some bag packing for the mornings trains to Vienna.

The last 2 days in Prague it had finally gotten colder, but alas, we didn’t have any snow. Every single place we have visited, it has snowed after we left………..and snow was forecast for the following day in Prague!  We couldn’t catch a break with the snow. The kids were getting a little desperate to see some. We knew we’d fulfil that request once we hit the Alps but we’d been hoping for some snowy cities to explore beforehand.  Even without snow, Prague was very pretty and definitely worth seeing.

Statistics for the 30th of December 2015, in Prague – the temperature for the day was – minus 4 to 3, with a mean of zero degrees.  It’s finally getting colder! The total walking for the day was 12.5km, and again Astrid walked all of it. She has become a walking super-star!