The final day of 2015 started out in Prague, before we headed to Vienna for the start of the Austrian portion of our trip.  We celebrated the end of 2015 with a lovely dinner and joined in the festivities in Stephansplatz, with a live orchestra and beautiful lights! 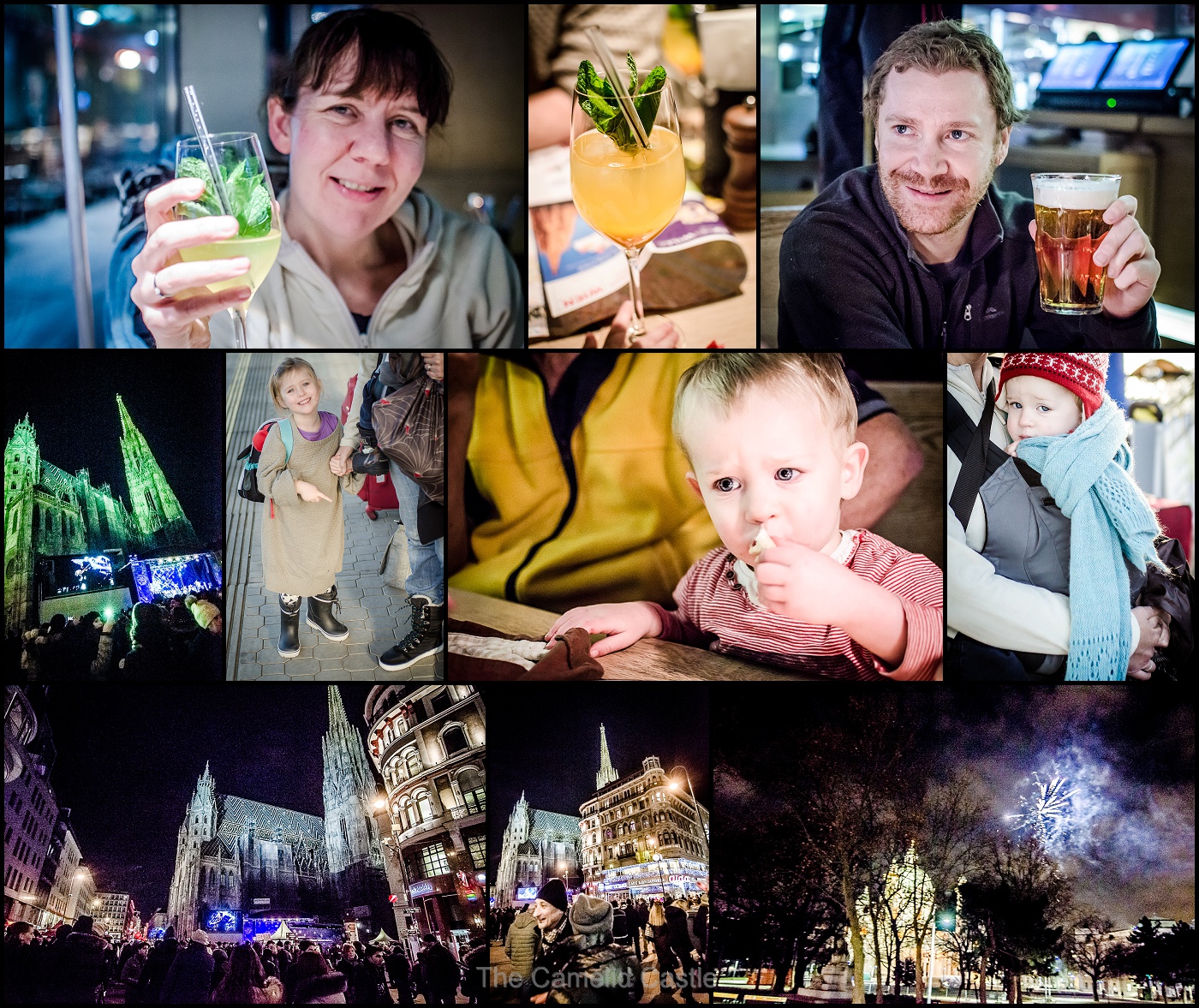 We  were all up just before 7am for the last-minute packing and then headed to the train station.  Luckily it was all downhill to the tram stop! Given the time taken to get everywhere with luggage we left with plenty of time. Our tram ride was quick and then we transferred to the metro.  This was the only metro trip we did during our 4 night stay in Prague, and it was nice and efficient.  Aside from our accidental fare evading on the first night, we religiously bought tickets and didn’t have them inspected once (or even saw a ticket inspector!).

Due to our efficiency in getting to the station, we arrived at central with an hour to spare before our train departure. The promised chilly weather had finally arrived and it was minus 7 on the way to the station, it definitely looked like we were going to miss the snow again!

As we were out of breakfast supplies we had our usual train station breakfast of pastries and coffee.  We did have to count out how many we could buy with our remaining Czech money, as we weren’t getting more out when we were not going to be needing it any more. Like Berlin, Prague was very much into the use of cash over card, so we did need to get local currency.  We did managed to scrape together enough coins to feed and caffeinate us.

The waiting area/foyer of the station is fairly large – which is lucky because there were at least 200 people standing around staring at the departures board, waiting for track numbers to be displayed.  They were very slow with indicating which track your train is leaving from. Most only going up 15 minutes before departure. This is a little frustrating when it takes time to get down to the correct platform with kids and luggage. It was way too cold to be standing out on the platform (and took too long to move between if you guessed the wrong one) so we just had to stand and wait…. and wait……. and wait.

The station was full of many early morning travellers and quite a few very drunk people, obviously indulging in the cheap Czech alcohol, even before 8am.  Finally, 10 minutes before our train was meant to depart the track number went up and we hightailed it to the platform and got us and the luggage on board.

We were in first class for the first section of the trip (the luxury of a cheap fare!). The first train was 3 hours, and we had a change of train in Břeclav, close to the Czech and Austrian border.  The kids were quite happy with their morning of international train travel and were generally happy. They love chatting to the train conductors and often score their own ‘tickets’. 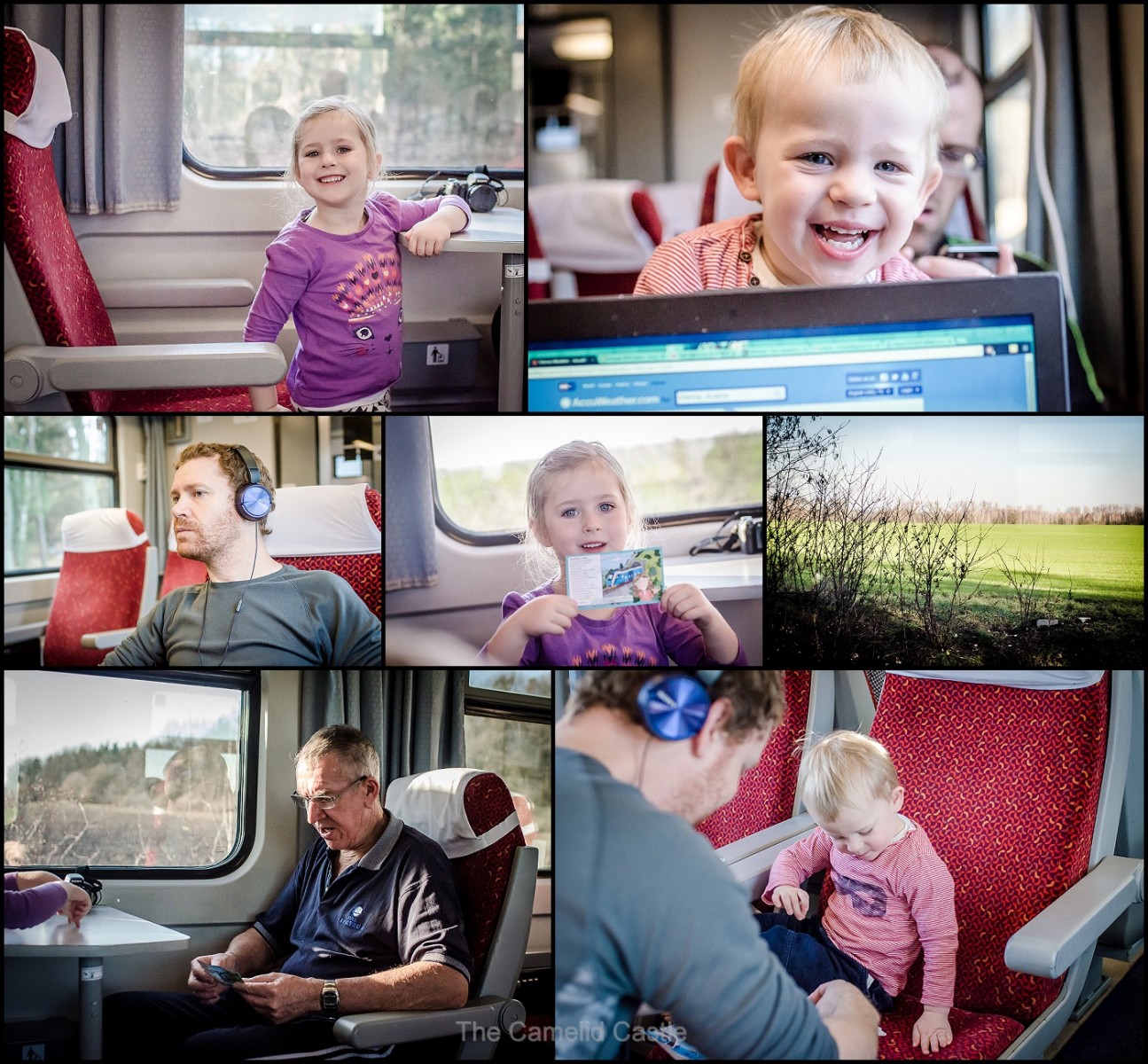 To fill in some time, the kids and Anto went to the restaurant car for some food (where you can use Euros), as apparently our cobbled together breakfast wasn’t substantial enough. Mikl had cabbage soup and Anto and the kids had a cold breakfast plate, goulash and a hot choc.  I spent most of the time trying to work my way through some photo editing and blog posts.

The train was not too full, so it was a fairly pleasant and relaxing journey (as much as it can be with 2 small kids). We were in the end carriage of the train which gave us a lovely view down the tracks as the train sped along at 150km/h to 200km/h. 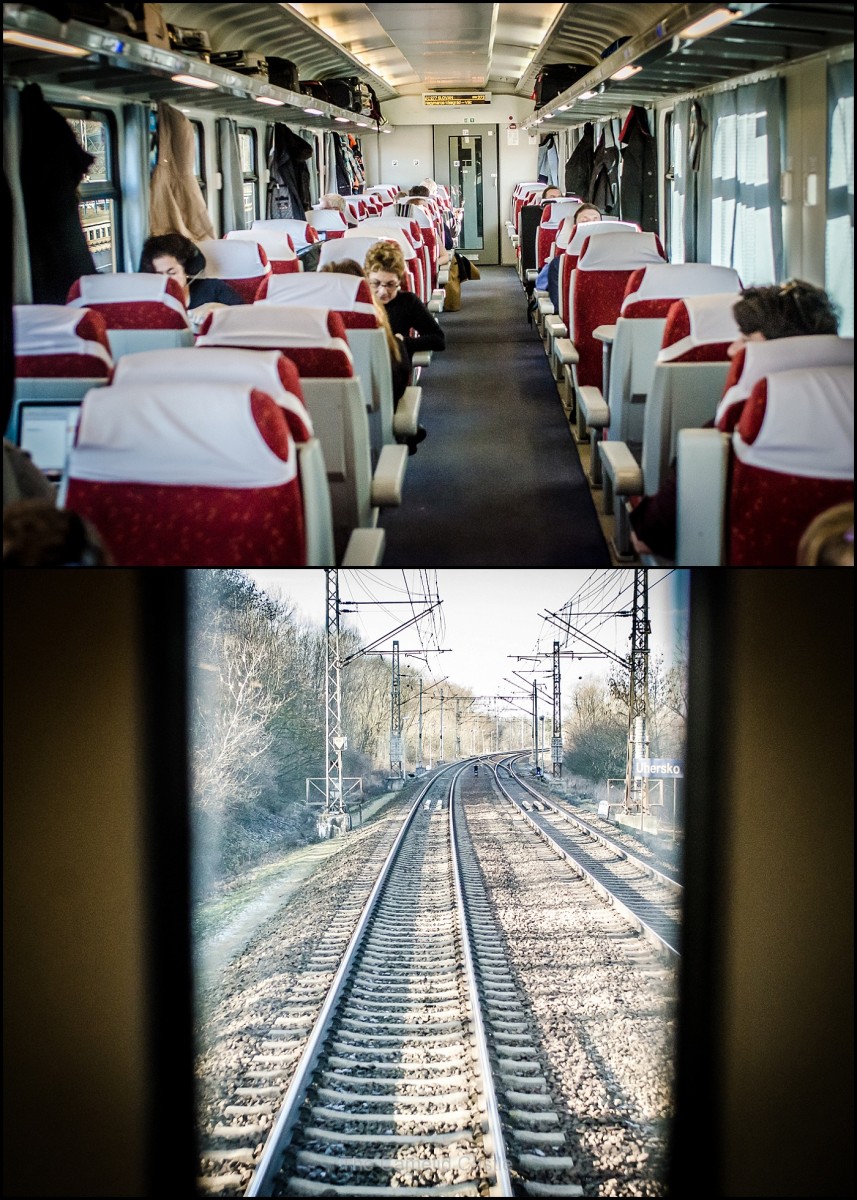 The train we were on was heading to Bratislava and then Budapest.  We had to change at Břeclav for a train to Vienna that should have taken around an hour.  The only problem was that we had 3 minutes to transfer trains (with bags and kids) and the train we were on was running 5 minutes late.  We spent most of the journey thinking we weren’t going to make the transfer and would be waiting an hour in Břeclav for the next train, and debating whether we tried to make the transfer or just relax and not bother.  The only saving grace was that the trains should have been on platforms next to each other….. and then our train made up a couple of minutes of time, giving us maybe a minute at best to transfer.  Thinking we’d give it a go, we got coated up and had all the bags in the end carriage vestibule, kids strapped down and were ready to throw bags and hope for the best……. 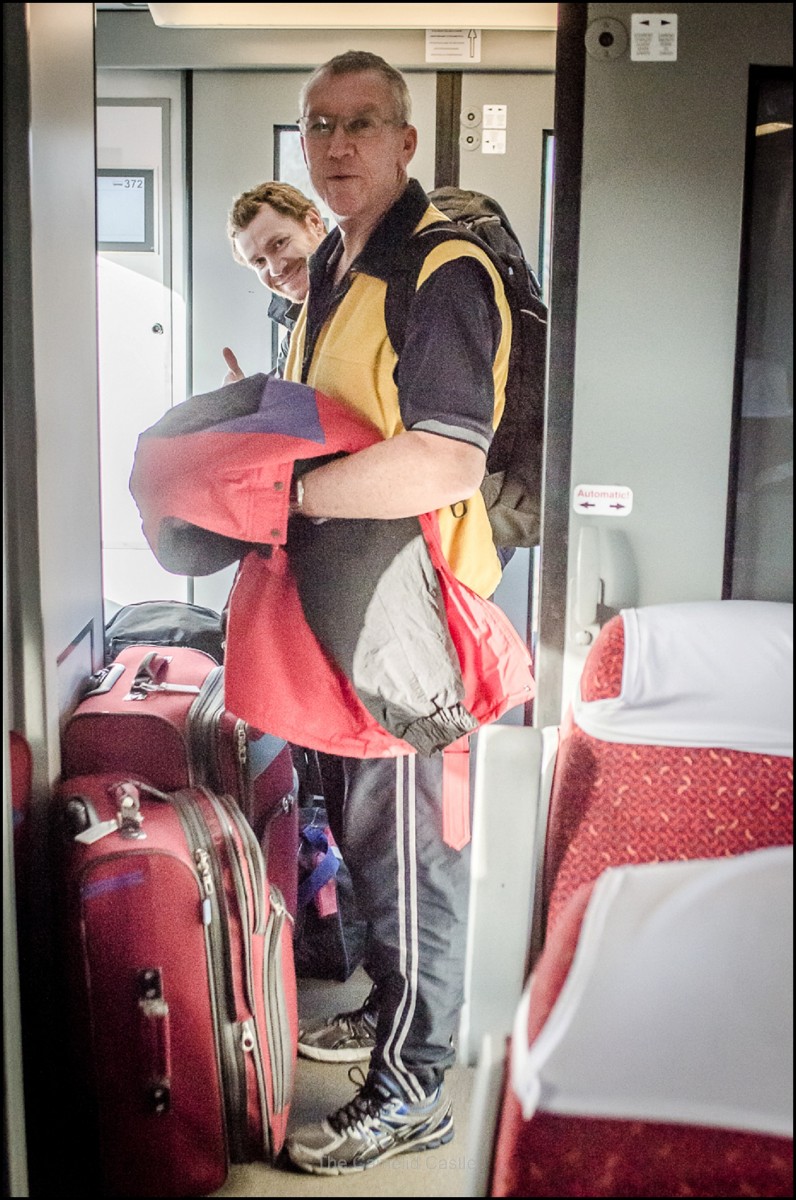 As we pulled into the station we couldn’t see our connecting train waiting and thought maybe it was running a couple of minutes late.  We threw all the bags out, jumped out, checked the boards above the platform and the train to Vienna was running 20 minutes late. Meaning a 15 minute wait.  All good, except we hadn’t put the snowsuits back on the kids to save some time.  It was around -7 on the platform so we had to make do with extra jumpers and scarves borrowed from the adults.  The kids thought it was hilarious!  We all thought it was freezing cold……. 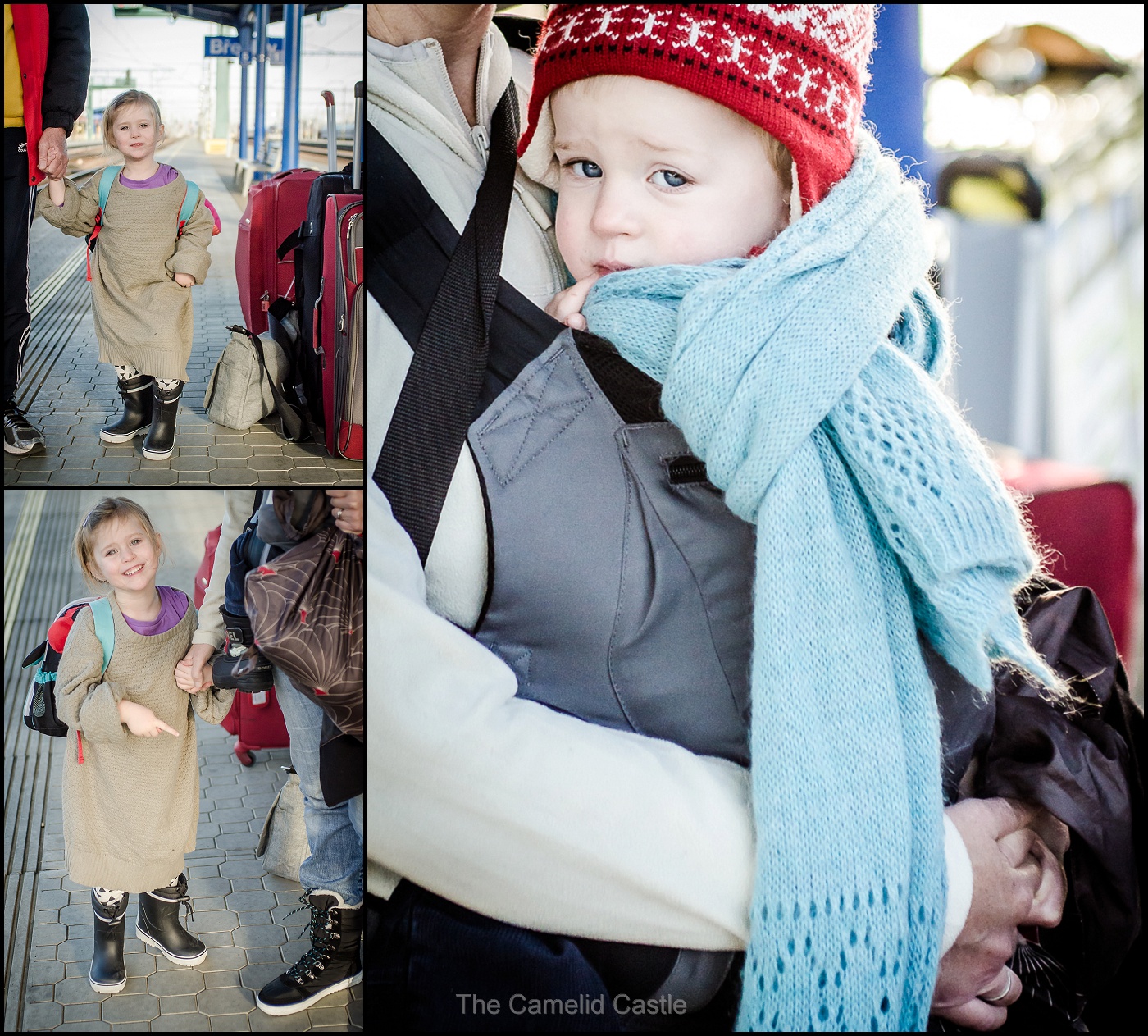 Once we were on the train to Vienna, we were once again in one of the small glass cabins but were now really good at stacking the luggage without it falling on our heads. The scheduled 1 hour trip only took around 40 minutes and we zipped into Wien Hauptbahnhof (Vienna Central) pretty efficiently. If we thought it was cold on the platform that morning in Prague, Vienna was even colder. 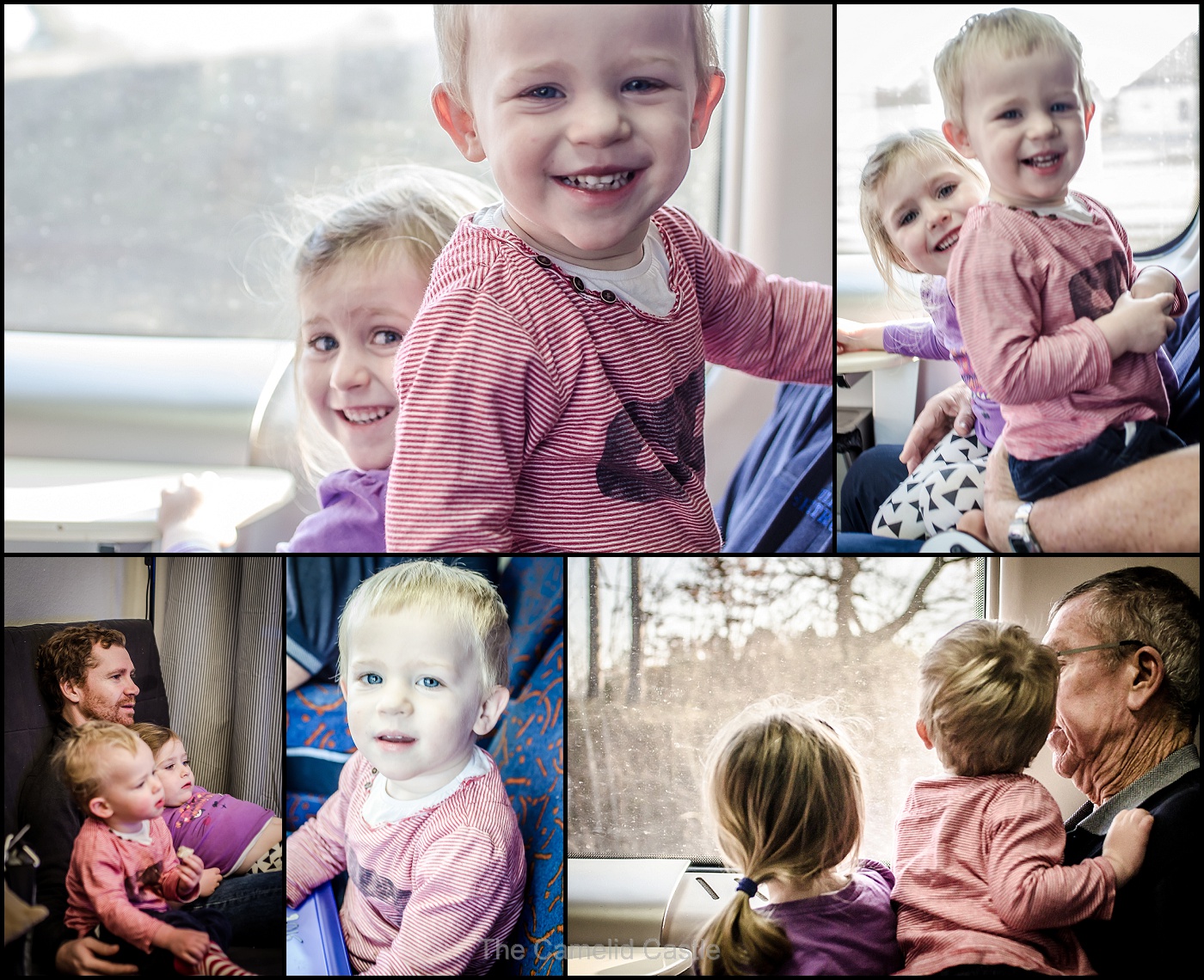 Despite the freezing temperatures, Soren fell asleep in the ergo while we were waiting in central for our train to our accommodation and buying our transport tickets.  It was a relief to be back on a warm train, and 2 quick trains and we were off not too far from our apartment.  The metro trains are always a challenge with luggage as they don’t stop for too long but we had gotten pretty good at getting bags on and off efficiently.

It was only a short downhill walk to our apartment and we got there a little after 3pm.  Since Soren was still napping on me in the ergo, and there was no way I could take my layers of coats off, I didn’t want to roast so headed off in search of groceries with Anto and Mikl, while Gramps watched Astrid (who definitely wanted to stay in the warm).

Being New Year’s Eve, every supermarket had shut by 3pm (we thought we had until 5pm).  In desperate need of at least some supplies, we resorted to a service station for some basics, to get us through breakfast the next morning.

Once we returned (well and truly cold as it was freezing out), we put our coats on and headed off into town (via the metro trains) for some dinner and some New Year’s Eve festivities.  In Vienna, there is family friendly activities from 2pm and there is a ‘New Years Eve trail’ that has markets and entertainment and runs through various parts of the city.  Fireworks were scheduled for midnight, but we knew the kids would not make it that far. We had headed into town around 5pm and the trains were not too busy.  Once we got off (somewhere in the city-ish area, we hadn’t yet got our bearings) we wandered around in the dark, along with a lot of random people carrying large fireworks.  To the kids delight some of these random fireworks were being set-off in parks that we passed, so they got some fireworks in, at least 7 hours before the real deal. 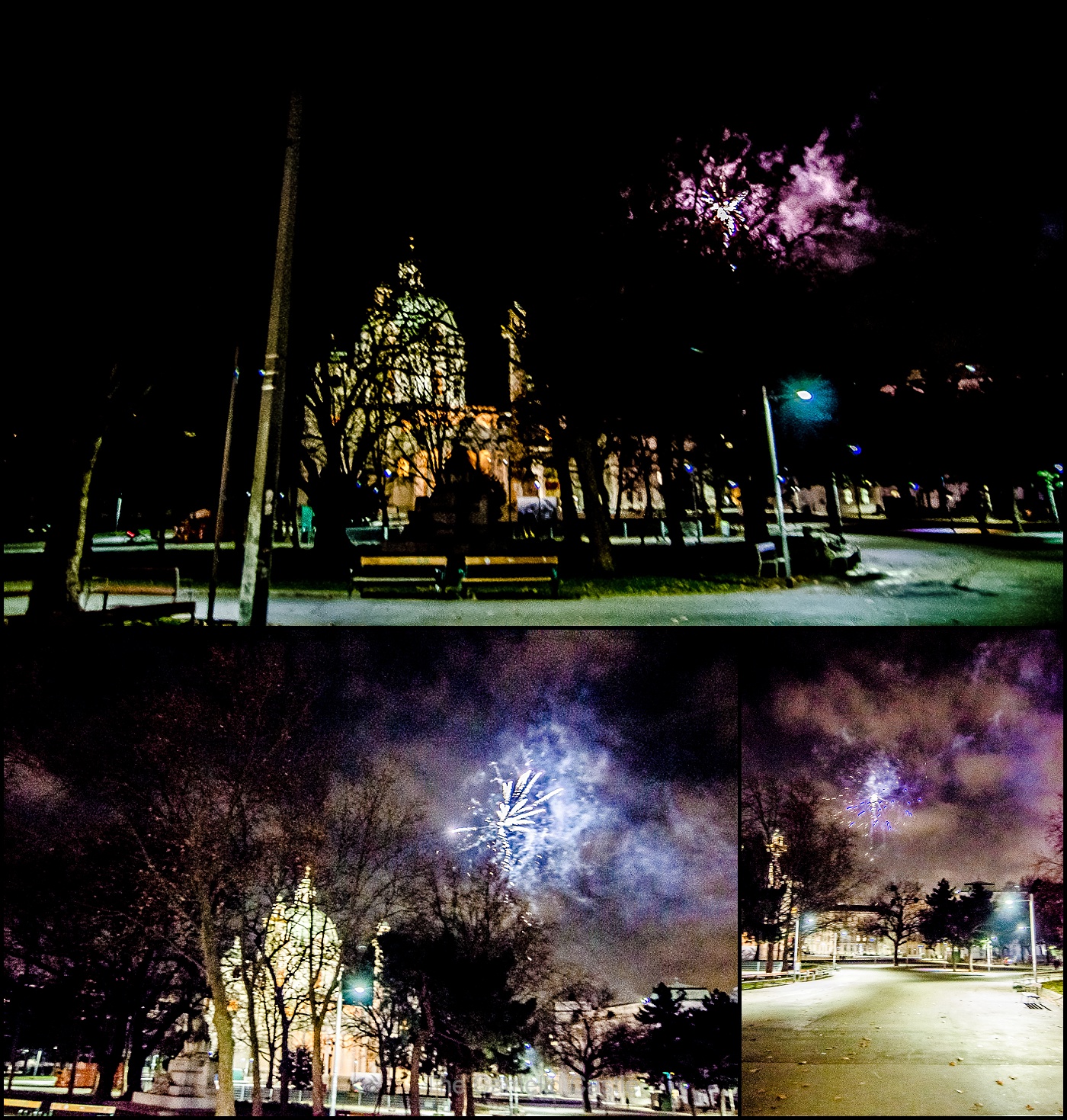 We eventually found Naschmarkt (an open air market with restaurants) where we thought we’d go for dinner.  Quite a few places were open but we decided on a Mediterranean restaurant that looked interesting. We all shared some mezze plates with bread –  some really tasty dips of babaganoush, hommus and falafel.  The kids were particularly impressed with dip and bread!  I had a haloumi burger for dinner, Mikl a pulled beef burger, Anto has smoked eggplant with tomato and a coriander salad and egg and hommus, which I almost ordered and was really tasty.  Alan had lamb and beef kebabs. Since it was NYE and all, Anto and I splashed out and had elderflower bellinis, the other boys stuck to beer. 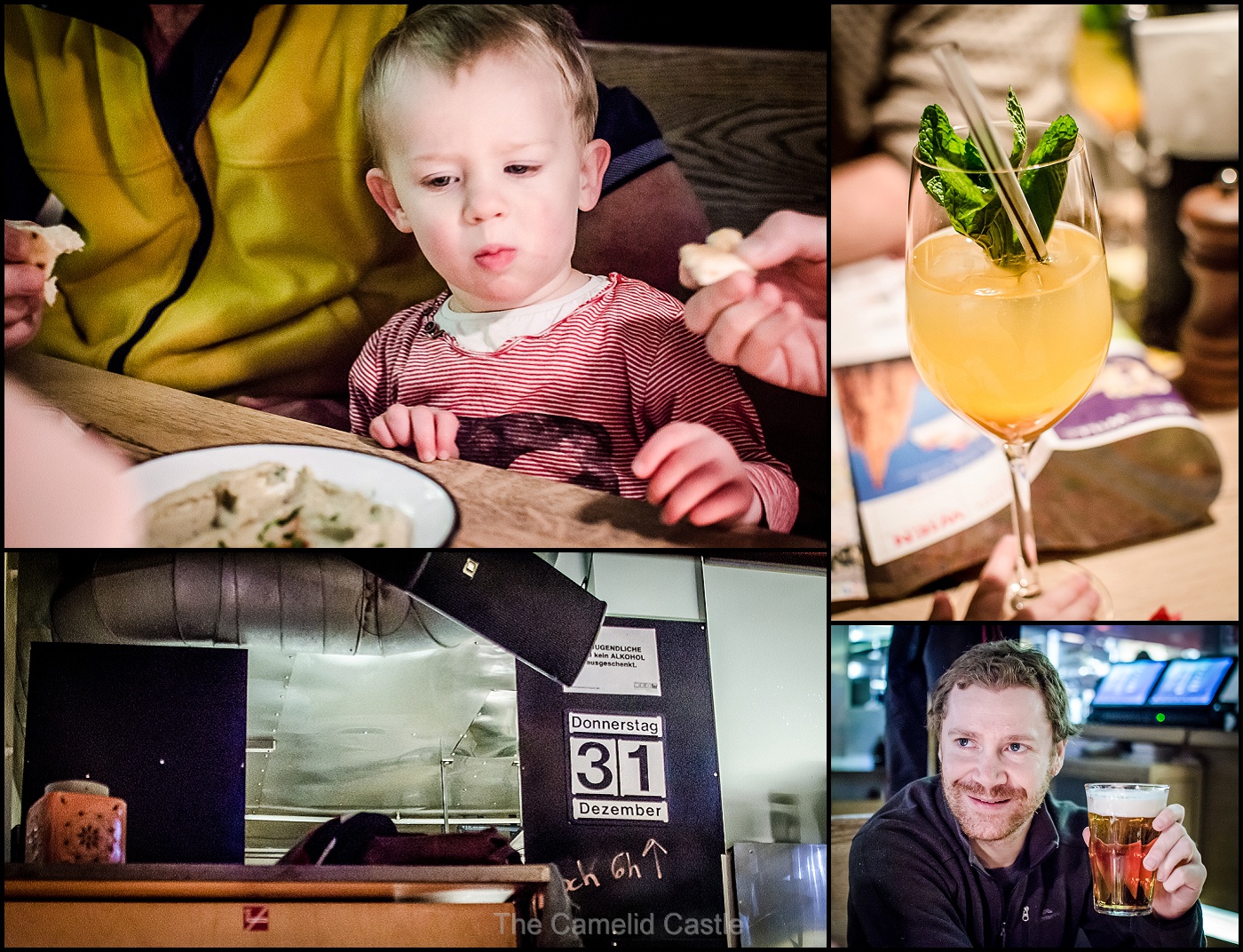 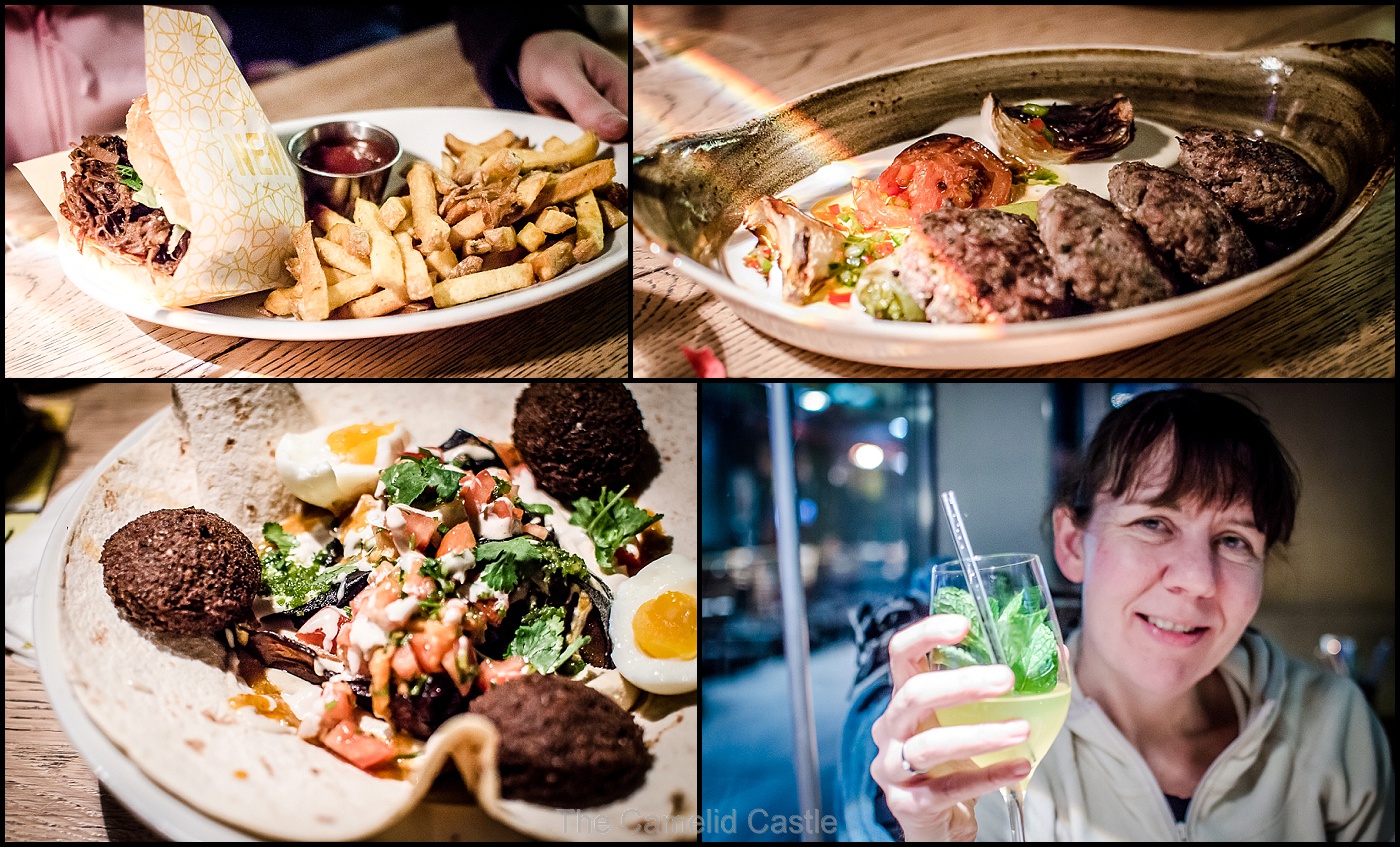 All stuffed to the gills after an enjoyable last meal of 2015, we caught a train to nearby Stephansplatz to get into the New Year’s spirit.  Even at 7pm Stephansplatz was filled with people. The Vienna Philharmonic Orchestra was playing it’s traditional New Year’s Eve concert, which was being broadcast on screens all around the city and right next to the orchestra.  The orchestra was joined by various opera singers and there was an amazing atmosphere with people singing and dancing. St Stephan’s Cathedral was lit up in various colours and there were lots of markets and stalls selling food and drinks. 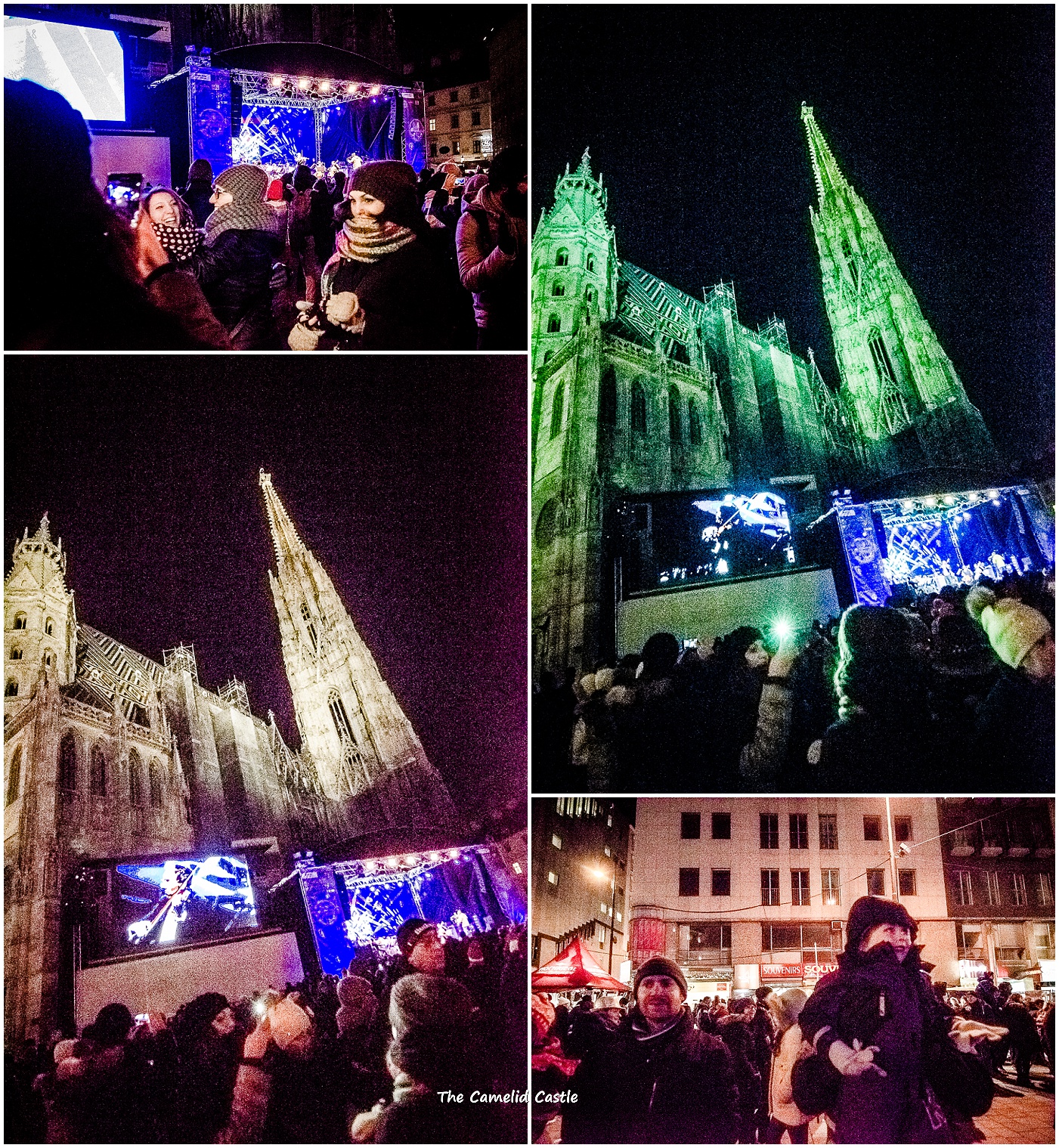 The kids were enjoying the music and lights and loved dancing around to the orchestra and accompanying singers.  We walked around the area and checked out all the beautiful lights. Unfortunately by 8.30pm they were well and truly over-tired (as expected) so we had to think about heading back to the apartment. It certainly beat the usual Canberra New Year’s Eve in the city! 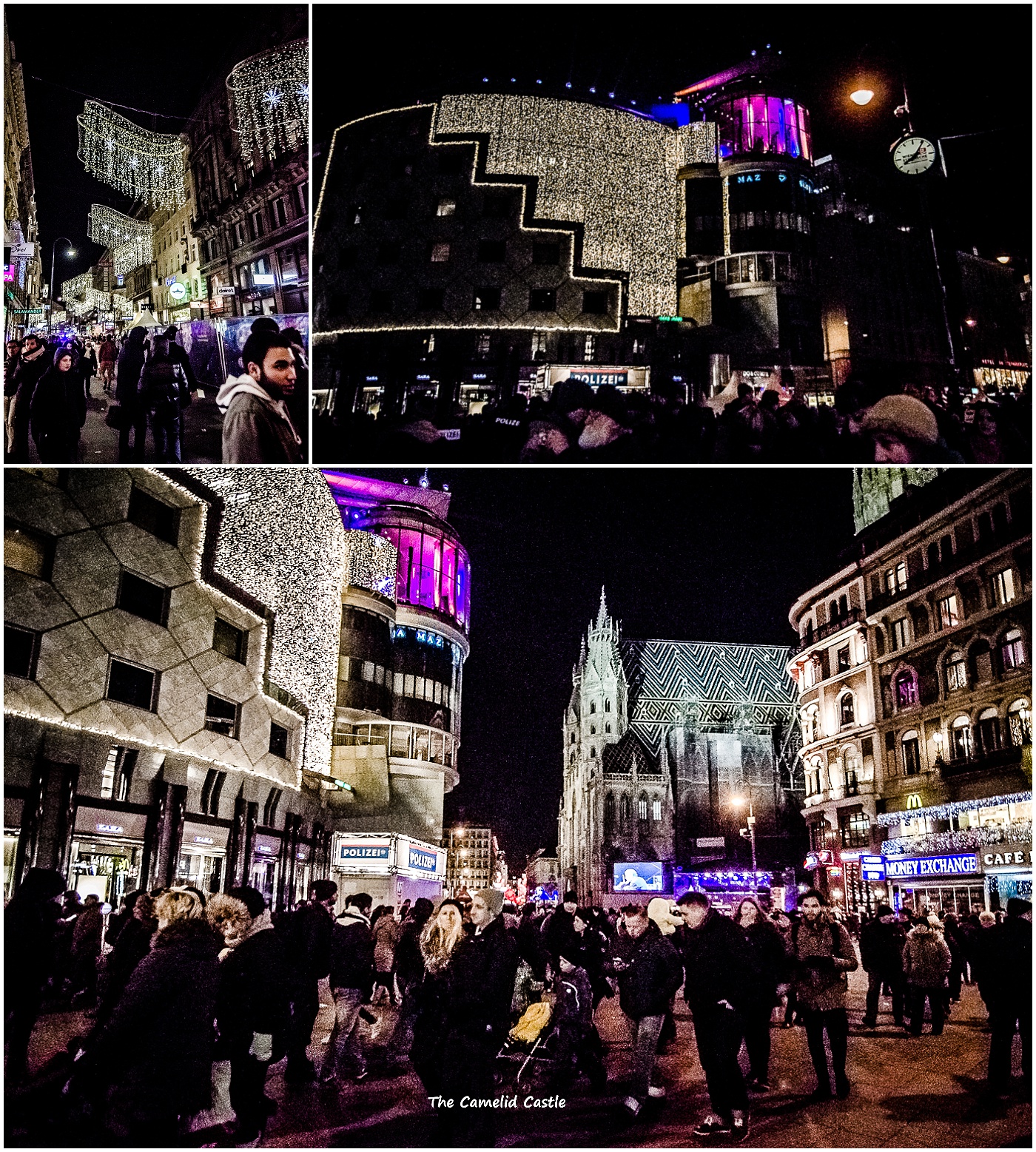 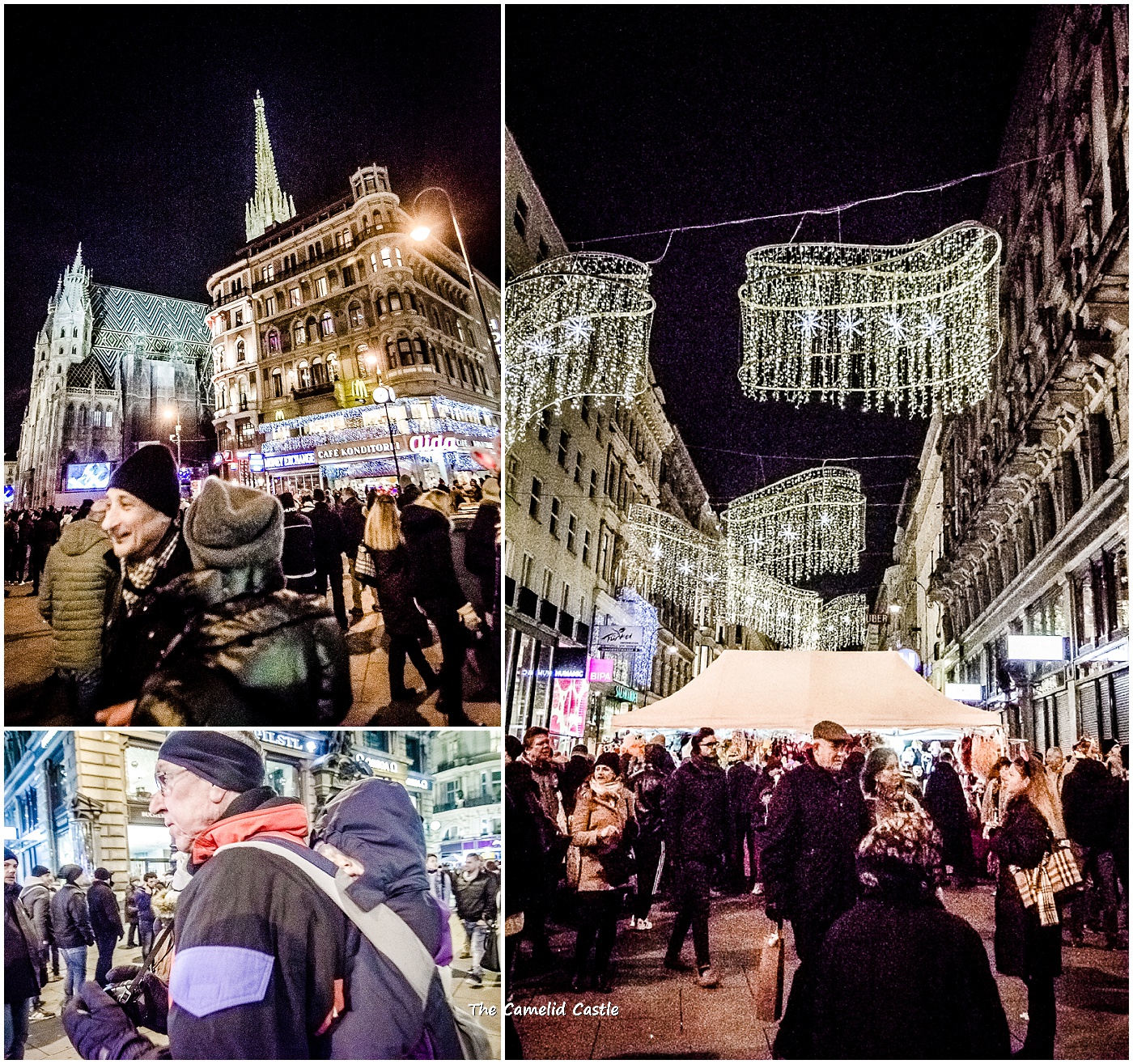 Astrid was so tired that she fell asleep in the ergo, amid all the noise and hustle and bustle. A well and truly exhausted munchkin.  Luckily she had seen her fireworks earlier in the night. It was also getting mighty chilly, so we were glad we had dressed the kids in their snowsuits. 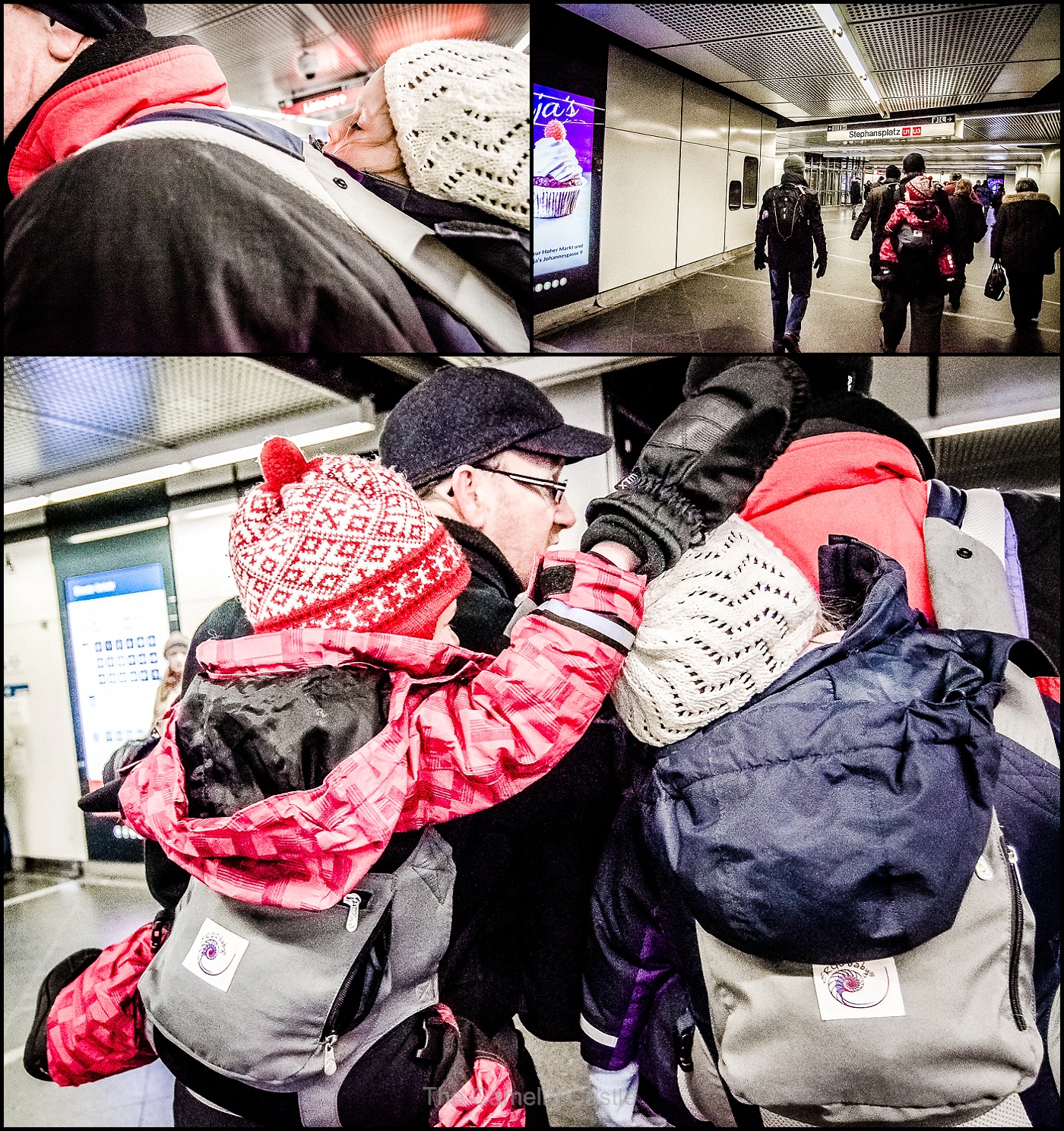 Soren was determined to give a sleeping Astrid cuddles, and was showing no signs of giving in to sleep himself. He was keen to see the New Year in.  We headed back into Stephansplatz station around 9pm, which was now filled with police, all carrying assault rifles.  The station was closing at 10pm, for a few hours, due to the NYE festivities, so we wanted to make our escape before we had to walk further. 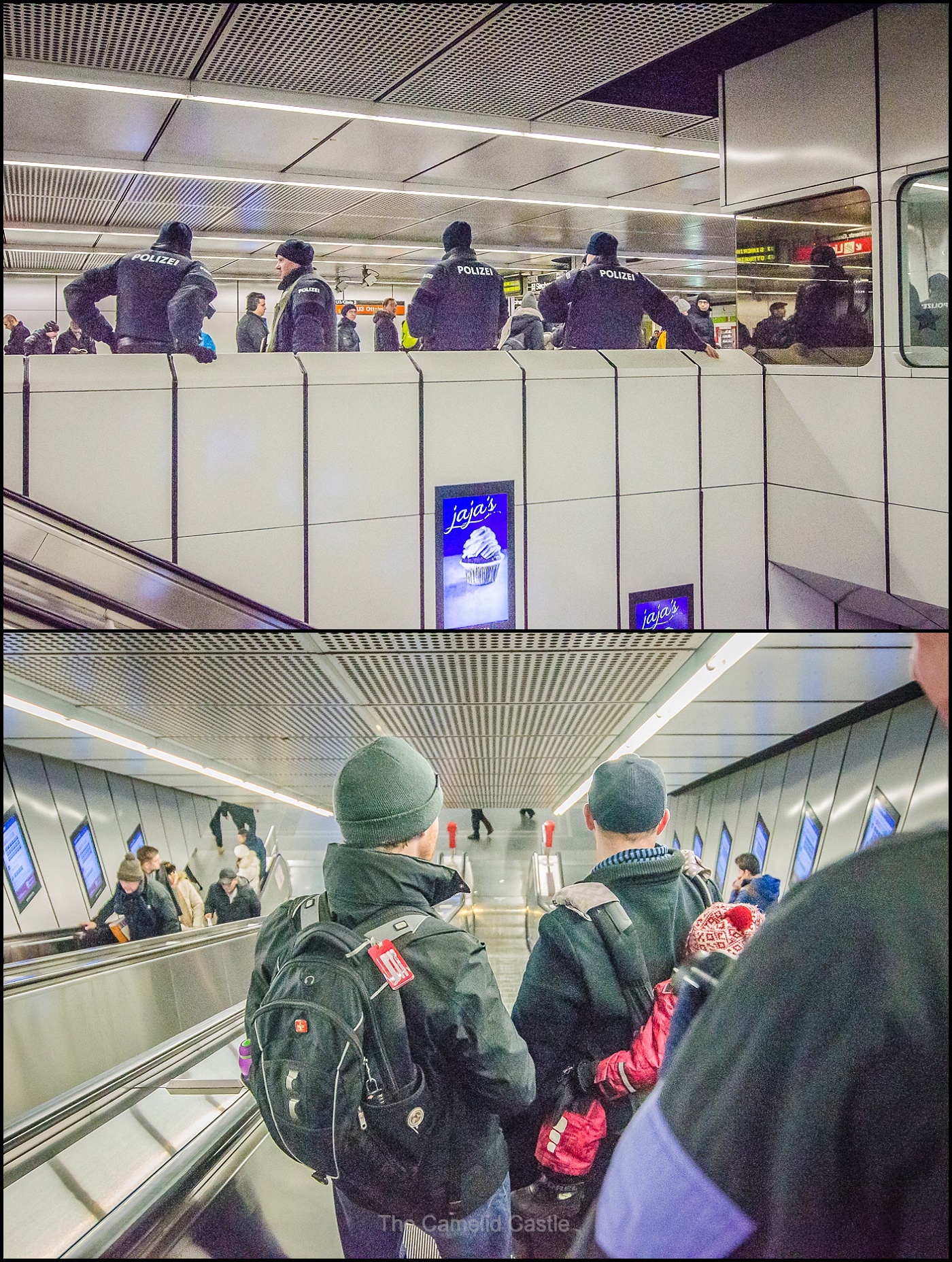 As we were heading back, hoards of people were heading out into the city.  Astrid managed to stay asleep for the entire trip back to the apartment and was very glad to reach her bed.  Soren eventually gave into sleep as well. We might not have seen many fireworks, but we sure heard them going off all night long – with a particularly loud section of them from about 11.45pm til well after midnight.  We weren’t anywhere near the city but that seemed to make no difference, there didn’t seem to be any regulation on fireworks and people were letting them off right outside our apartment.  Somehow the kids slept through all of it, but the rest of us heard it, and they started up again before 7am!

Statistics for the 31st of December – in Prague it was a brisk -7 when we departed. The day in Vienna was -5 to 0 with a mean of -2.  It seemed to be around -5 most of the afternoon and evening!  The cold weather had finally arrived, and snow was forecast overnight, all our fingers and toes were tightly crossed that we’d wake up to a snowy new year.  Total walking for the day was 10.2km (not too bad give we had 4 hours of sitting on trains!).