We were finally almost on the right timezone, and the kids slept til almost 7am. Of course we were about to change time zones again………. always the way! This day was always planned as our low-key and relaxing day of holidays, before a late night flight out to Helsinki, so  we didn’t have a lot of plans.

We started with breakfast in the hotel (Parkroyal on Kitchener Rd) and Anto and I had another good selection of curries, a definite advantage of the hotel location in Little India! With lots of Indian patrons the food choices were excellent. Kids mostly ate cereal and French toast, because they could!

Our morning plan was another little wander of Little India and the Mustafa centre to pick up a few souvenirs and watch some food being cooked. We were again out early so lots of places were not yet open.  Astrid got a new headband and some key rings and we again walked past the chapati place she had spied yesterday.  She requested to go back to for lunch.

It was already starting to heat up so it was back to the hotel for a swim. It was our last chance for swimming before the onset of much colder weather in Europe!  The hotel pool was pretty busy but we had a quick dip and play before it was time for some packing and lunch.  As was traditional, Anto was informed he had to throw each child in the air for photos, it’s what we do in hotel pools, apparently! 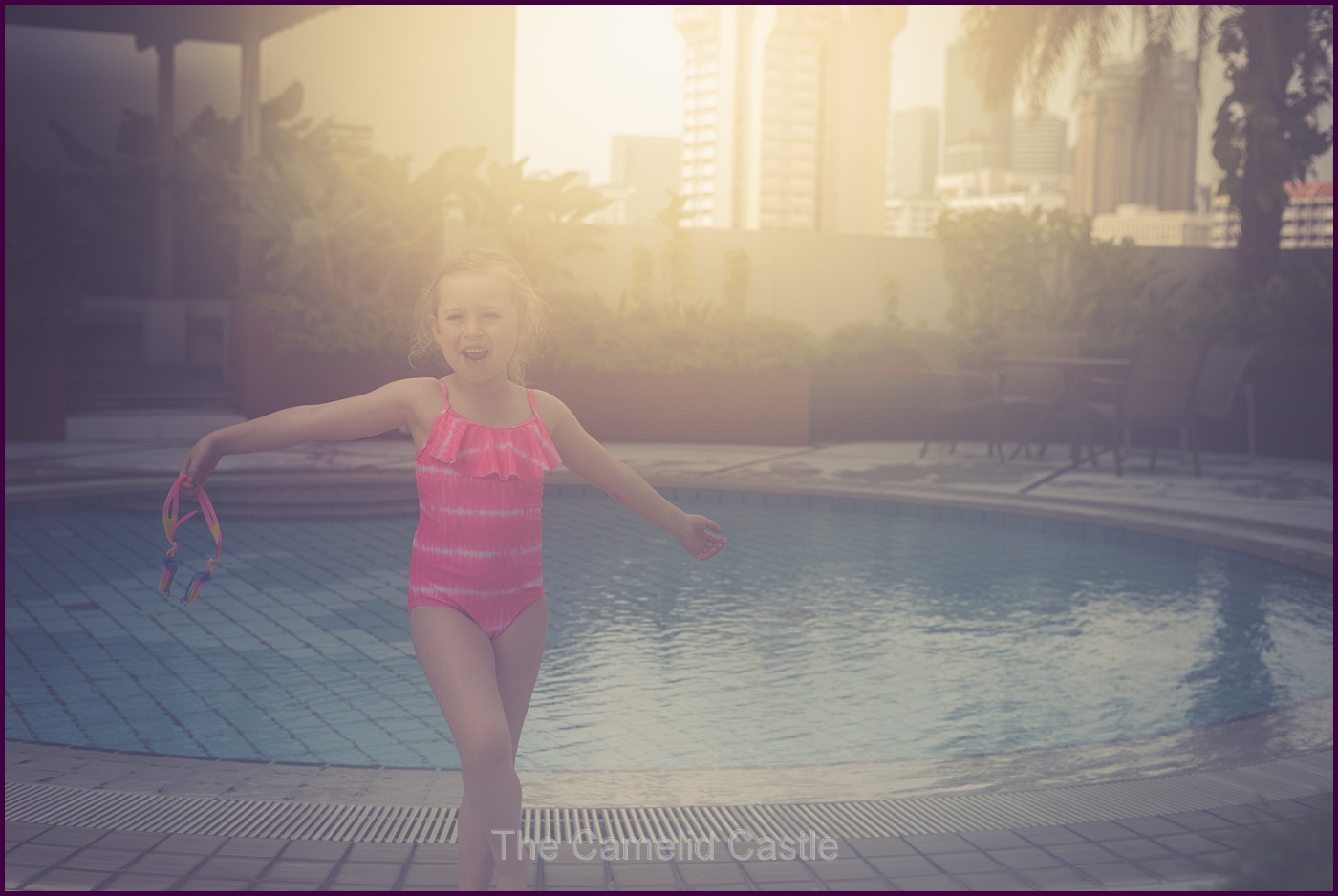 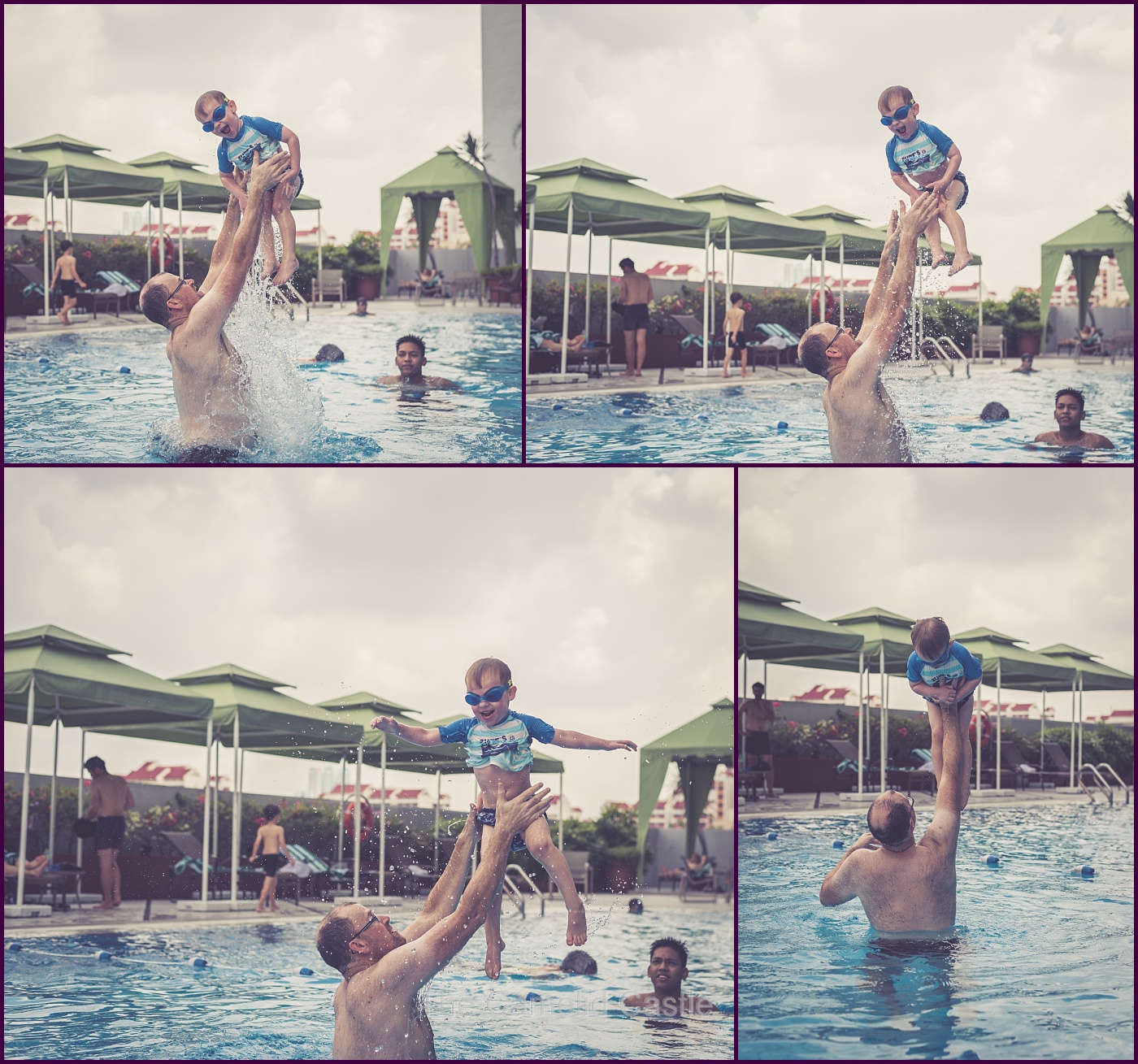 Despite not being the least bit hungry we’d been taunted by curry smells eminating from nearby food places while swimming in the pool.  It was going to be a long day, so off for curry it was!

It was only just after 12pm and it was already very busy and pretty much everywhere was now open. It was a Sunday so it was definitely not easy to walk around with all the crowds. As per Astrid’s request we went to the chapati place and she finally got her chapati after watching them being made. The kids had a chicken biryani, Anto had chicken wings and I went for the onion dosa again. The kids immediately made chicken biryani and cucumber rice wraps.  All the locals thought the very white kids scoffing down curry and commenting on the cooking was rather amusing. 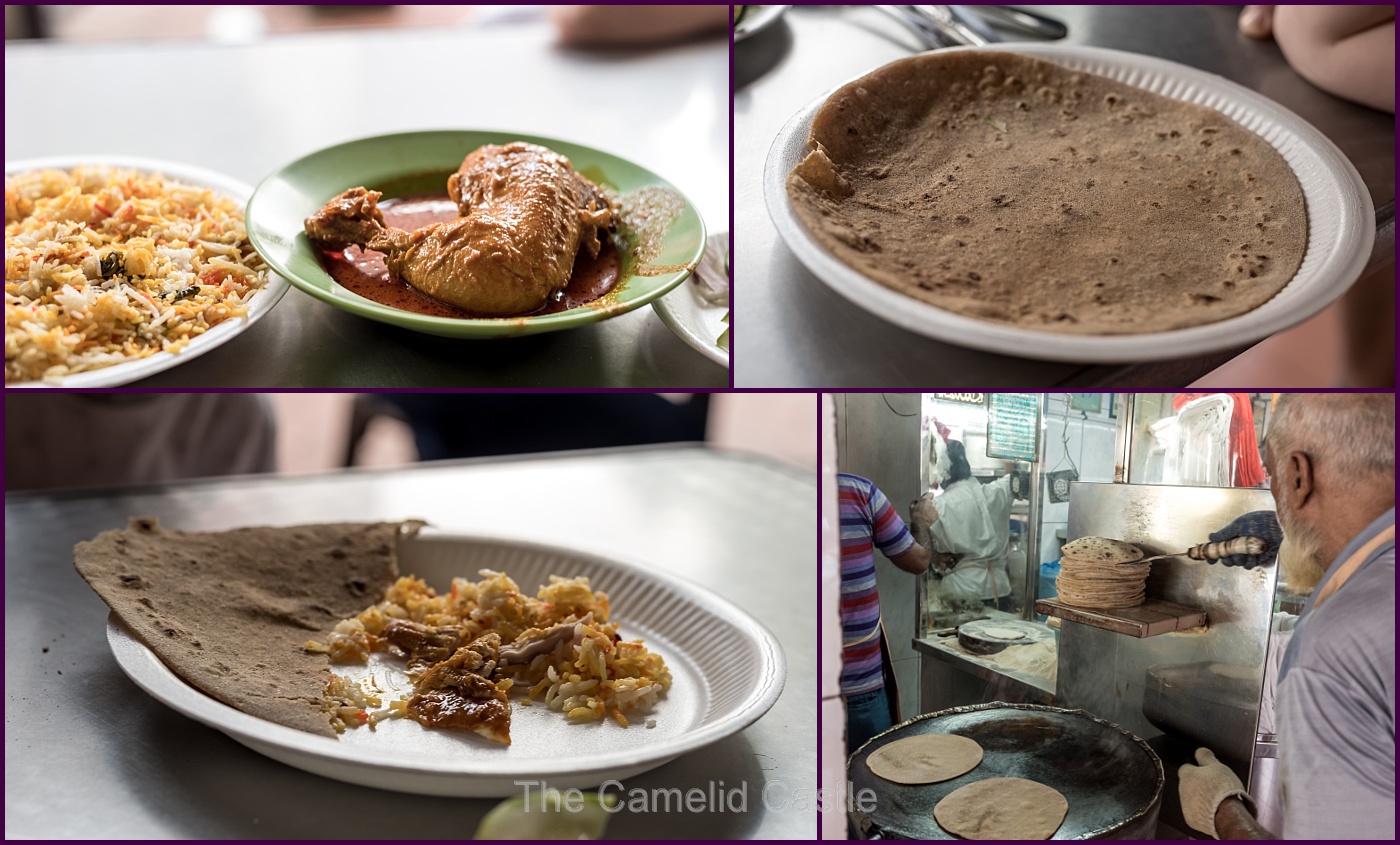 Full of yummy curry, it was back to the hotel. The temperature was now approaching 39 degrees apparent. It was rather sticky! We had a late check out from the hotel of 3pm but we also had booked a day hotel at the airport in an effort to get a late afternoon nap.  We left the Parkroyal a bit after 1 and MRT’d back to the airport. As the Farrer Park MRT station is across the road from the hotel, so we only had about 100m of walking on busy streets with bags and then we were walking entirely inside air conditioned stations.  It involved a couple of changes of train but wasn’t too painful and was easier than on the way in as we’d actually slept!

Due to another emergency toilet visit with Astrid,  oh the joys of traveling with kids (it is not easy to get out to toilets while inside the MRT station) we took awhile to get to the airport but had spotted the Crowne Plaza on the way into Singapore, so knew we were going.

We always knew we were going to need to do something for the afternoon when we had a long haul flight out at 11:30 pm, or it was going to be a very unpleasant evening with the kids. Annoyingly, most of the transit hotels at Changi airport are behind security. As Finnair only have 1 flight out of Singapore a day they reportedly don’t open their check-in until 3 hours the flight departure.  This meant we were pretty sure we couldn’t get to the transit hotels.  It turns out we were right and it was lucky Anto had stumbled on a blog post mentioning the Crowne Plaza doing day rooms up until 8pm. They also let 4 of us in one room so it was a good find, and turned our potentially awful afternoon and evening into a pleasant one.

Once at the Crowne Plaze we were checked in and up in our room by 3pm. The hotel was beautiful and had ponds on some of the ceilings that fascinated the kids.  We also could see the airport train from our room and the room had the most wonderfully soft bed and amazing bath.  Everyone was exhausted after a few days of nowhere near enough sleep so we were all off to sleep quickly.  For once the kids actually listened to our not so subtle requests to sleep and had the couple of hours required nap. We ended up having to wake Soren at 6 or he would have slept all night! 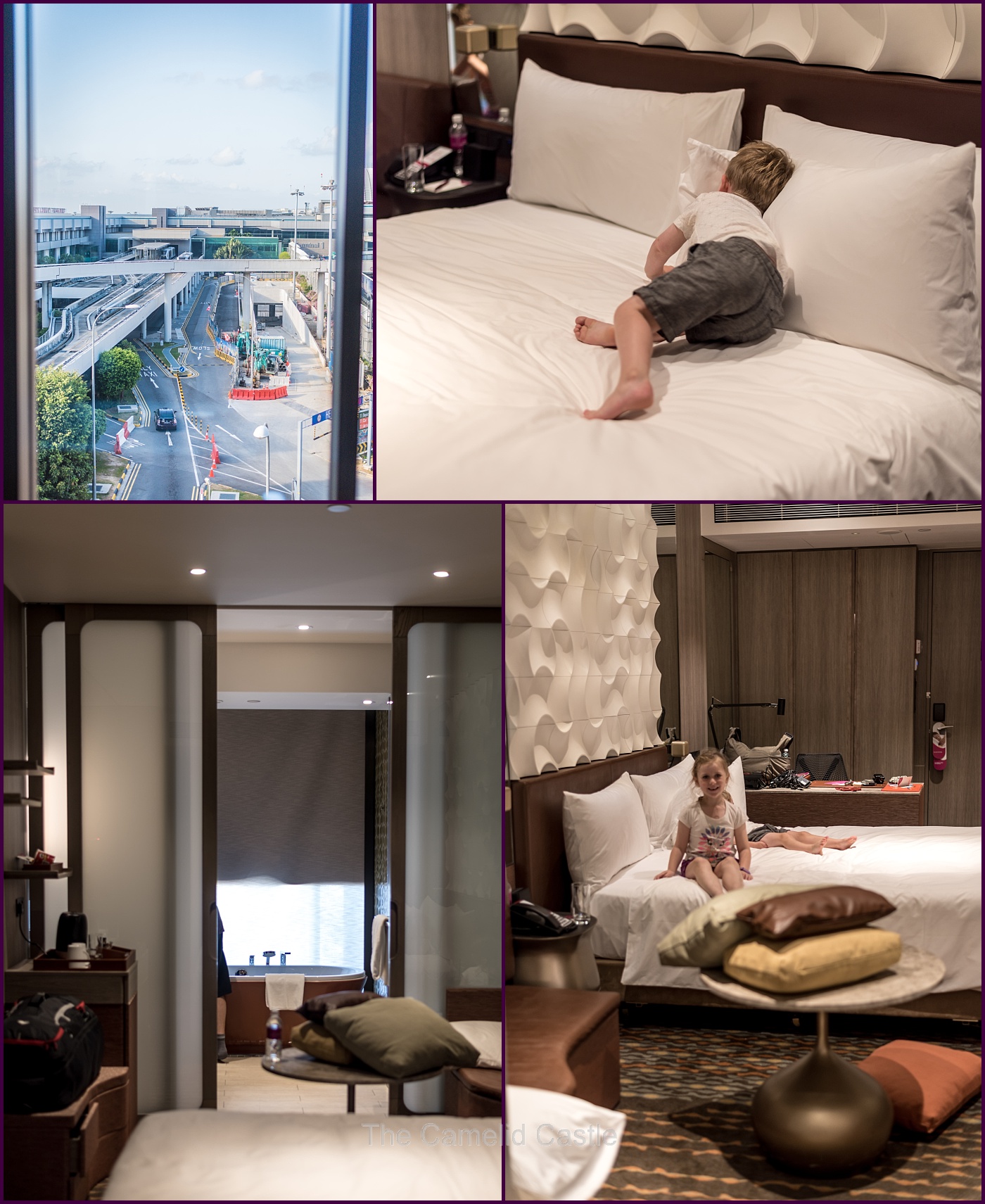 After our lovely nap, we decided to go down to the bar to get our free drinks (Anto’s hotel reward points scored us those) and the kids were rewarded for sleeping with cake and a mocktail.  Both bribery and our plan to tide them over as it was another 3 hours until we hit the Qantas club….. 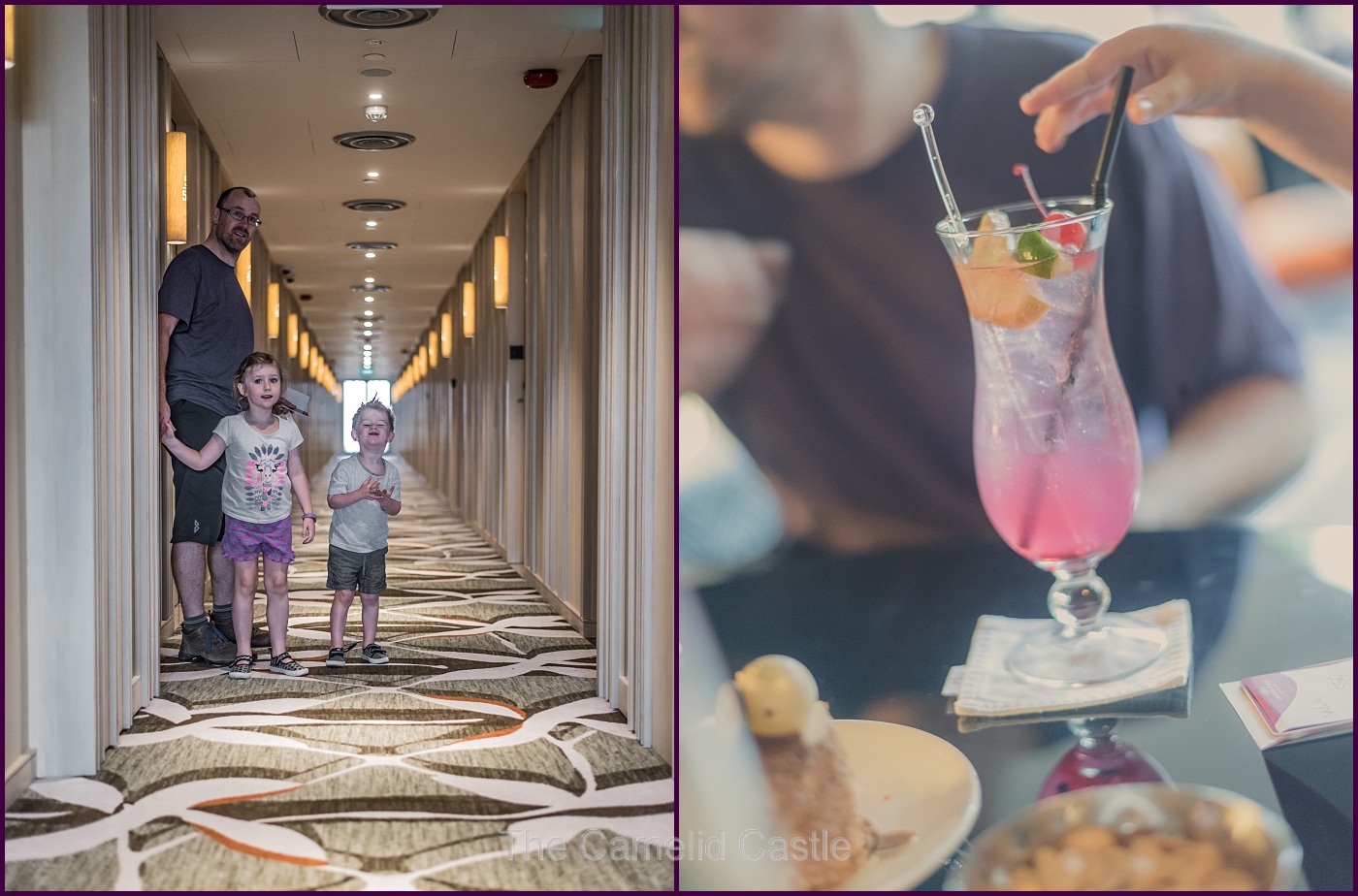 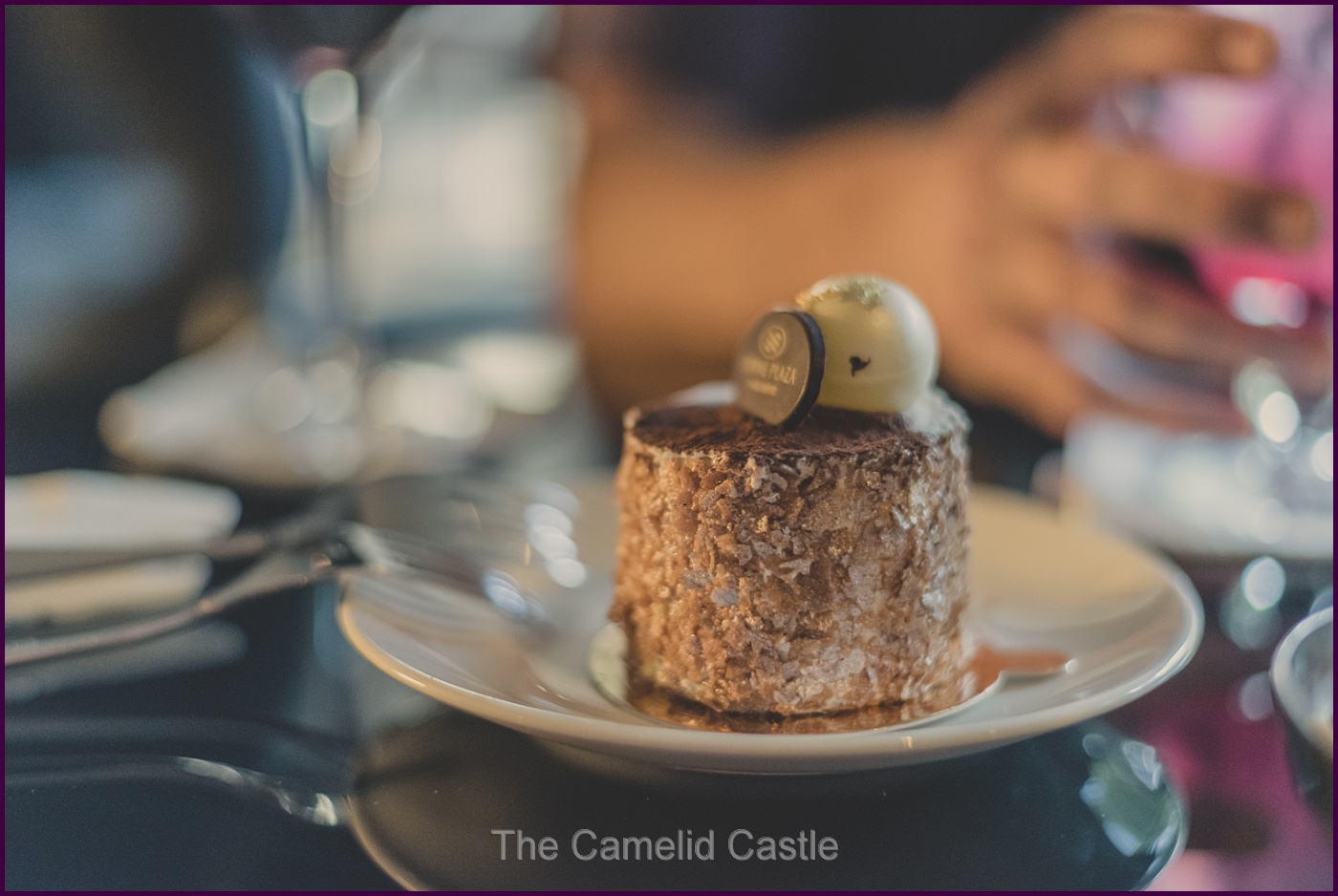 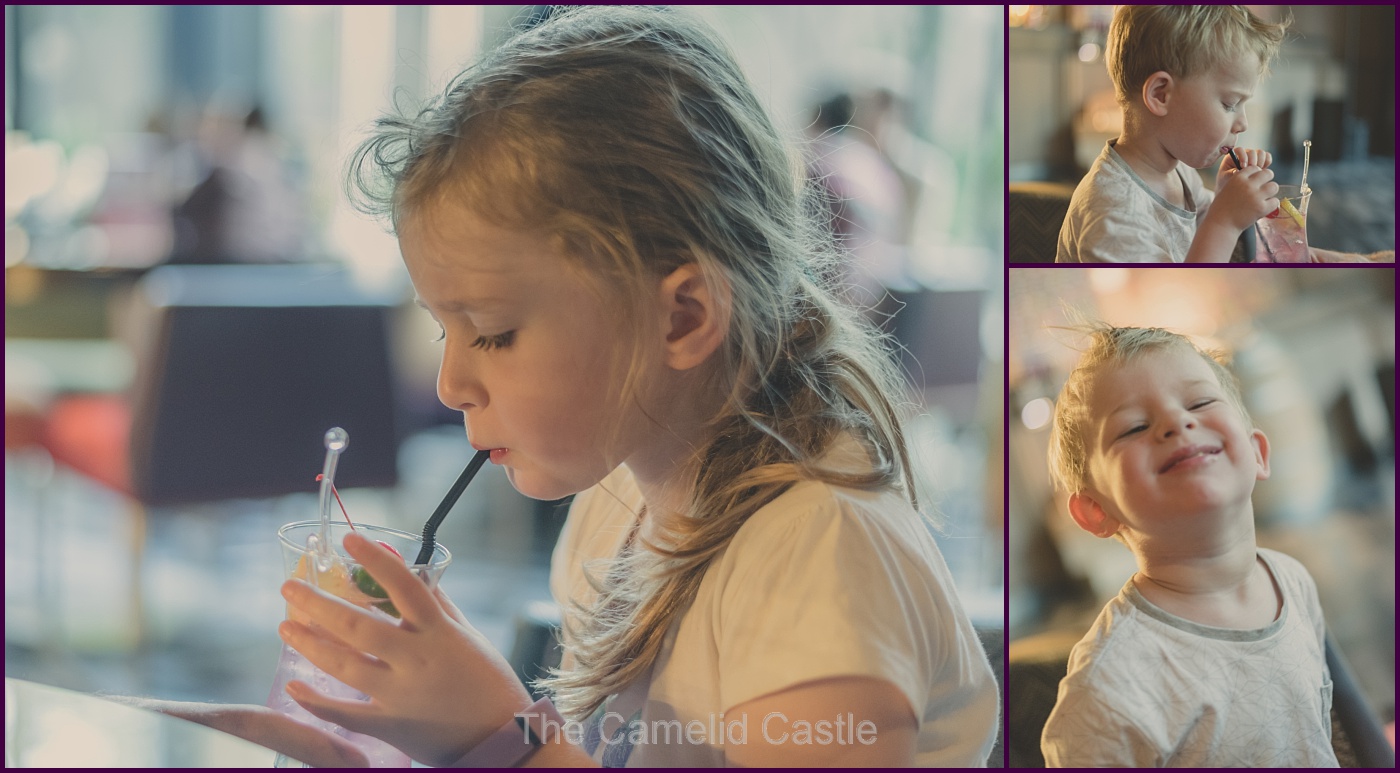 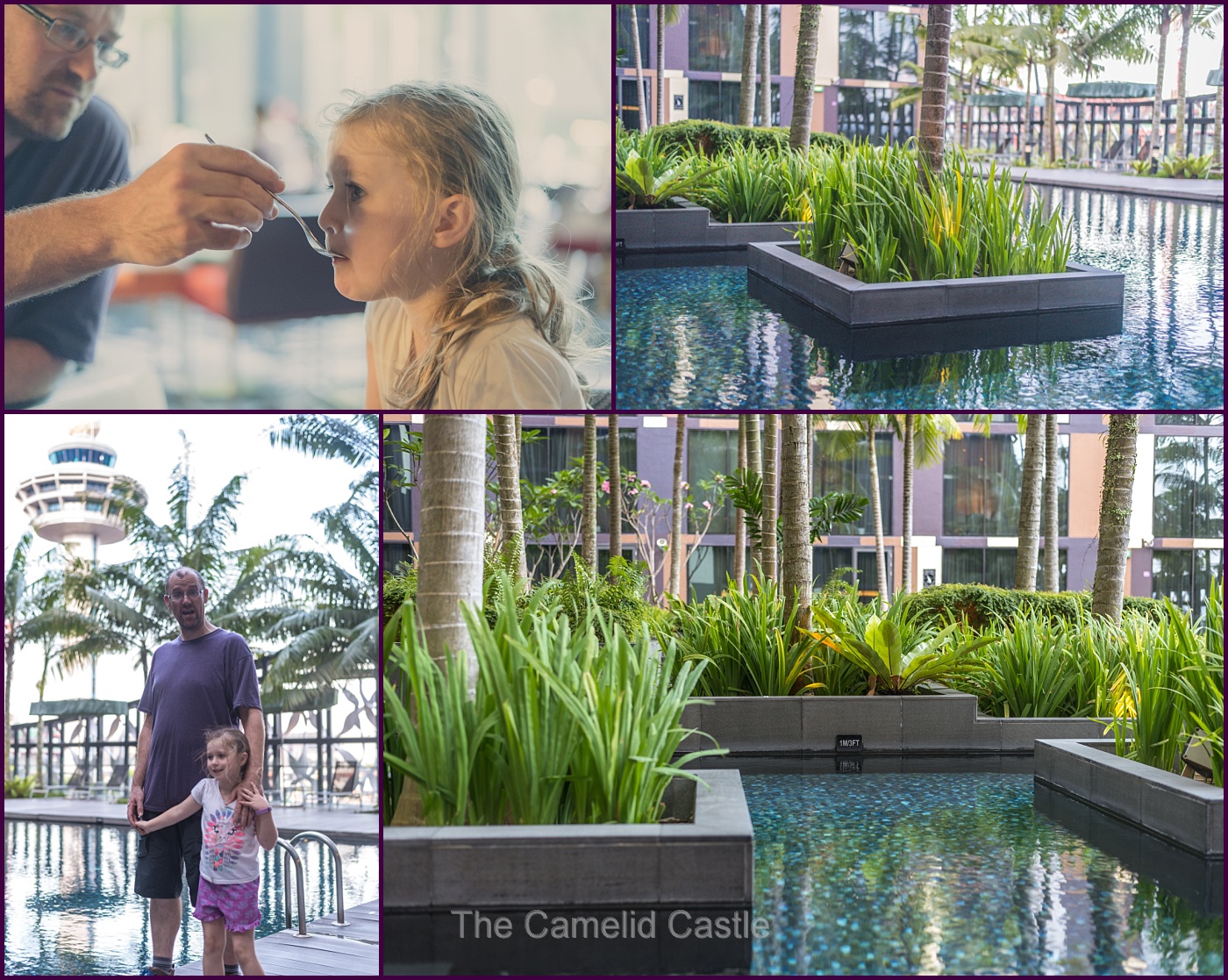 We had originally planned to go for a swim in the Crowne Plaza pool, but it was getting dark, so we instead ust checked out the pool. When we realised how enormous it was, we wished we had of had more time for a swim.  Unfortunately our check-out time beckoned and the kids opted for a long bath instead of a swim. Hot rain-head showers were welcomed by the adults before another long-haul flight.

Just before check-out we packed away our shorts and t-shirts and layered up in some warm clothes. It was mighty weird rugging up in our warm clothes after sweating it out in t-shirts and shorts for the past few days.

Sadly had to leave the hotel at 8pm, obviously others knew about the day rates as well as there seemed to be a mass exodus of late night travelers! Despite the cost of the extra hotel for the afternoon, we agreed we made a good call on it.  It turned a painful travel day into a pretty relaxing and restful afternoon. Money well spent!  We can highly recommend the Crowne Plaza at Singapore airport for anyone who has to transit through there.

The hotel is connected to the airport and you can use their luggage trolleys to get directly on the skytrain so it made for a trivial transfer through to our terminal. It turned out we were right about Finnair opening their check in only 3 hours before departure, as we had a short wait to be checked -in upon arriving at our terminal.

While we were waiting for check-in to open we were amused watching the art installation kinetic rain piece. A very experience as it made a heap of different shapes, it kind of wanted to make us go to sleep! 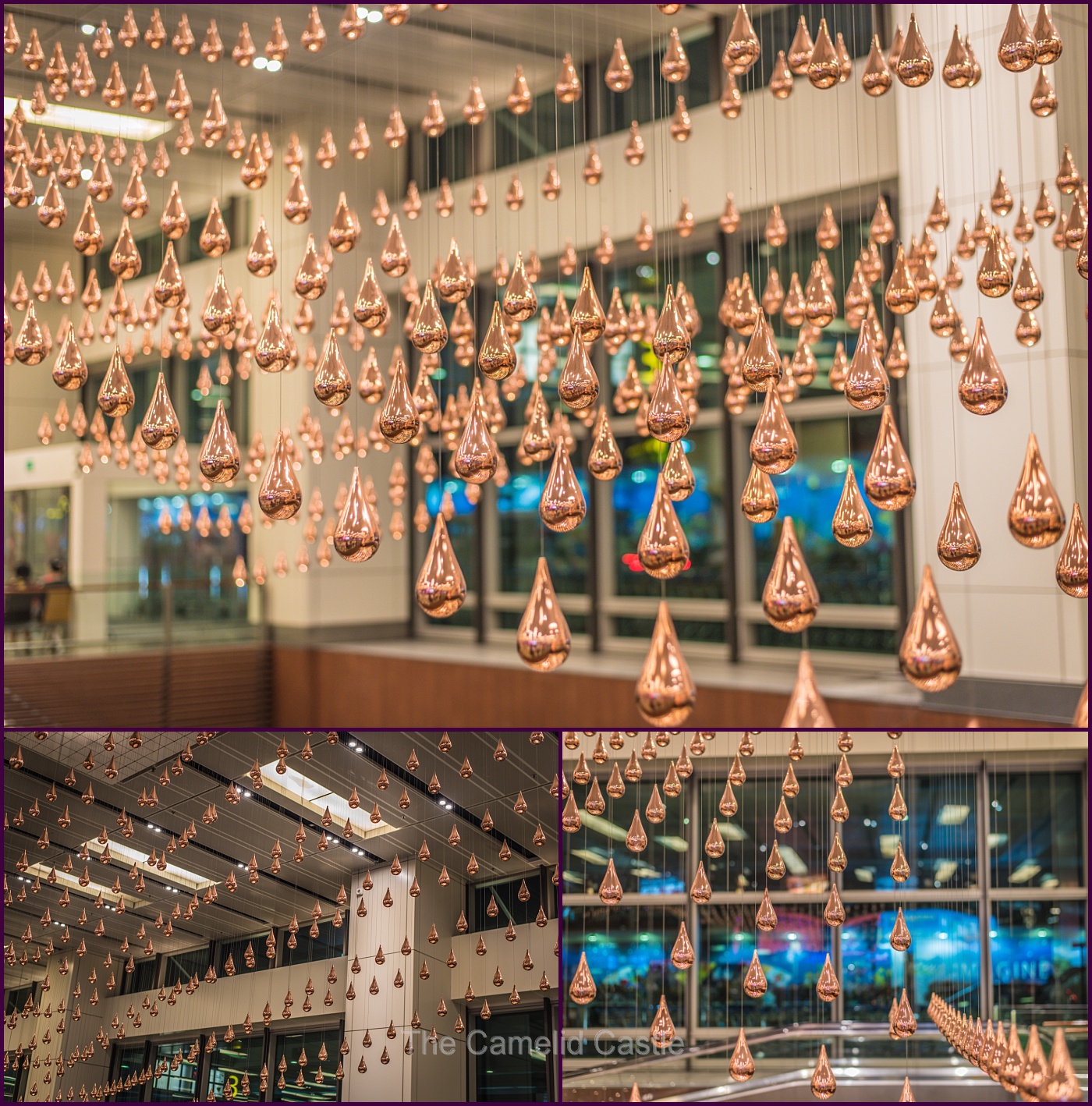 Finally, all checked-in we made it up to Qantas club. Singapore Qantas club is one of our favourite Qantas clubs as the food is always good and there is plenty of space. The kids went down to their usual spot (we transit through here often enough they know their way around and have their own ‘spot’.  It was now well after 9pm (after midnight in Australia, which is the time zone our bodies were partially still on) so time for some dinner.  We attempted to get the kids to eat something proper but I think other than a little bit of pasta and fruit they mostly scoffed dessert until the dumplings and fries came around.  Soren is a fan of sticky rice! 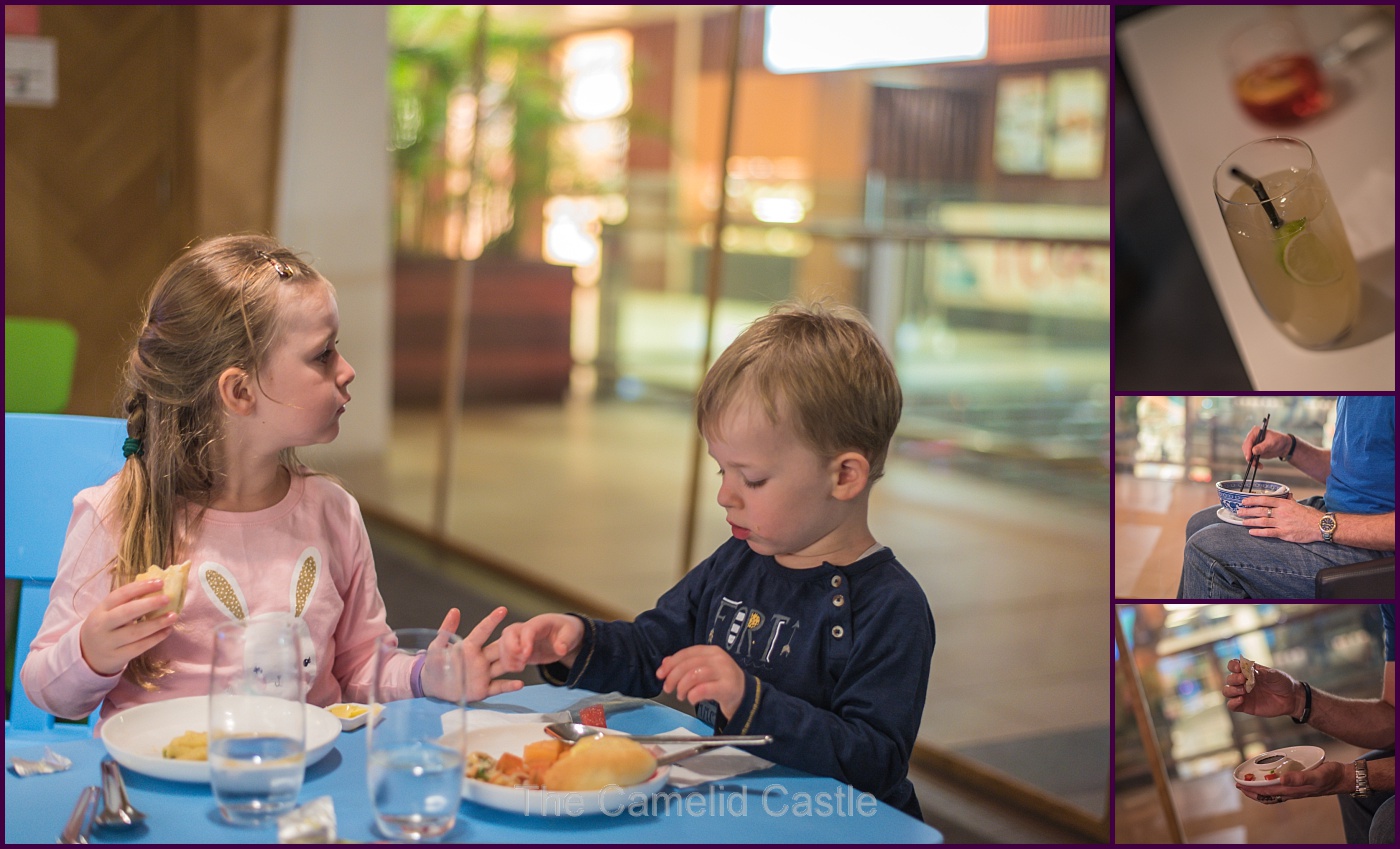 By 10.30pm the kids were starting to be over-tired but since I’d just managed to snap my fitbit band we decided to head out early to quickly get a new one from duty free (happy early birthday present to me).  By then it was time to walk to the gate and our plane was waiting. It was our first time on an A 350 and on Finnair.

The seating configuration is often difficult with kids in business. Finnair use the herringbone configuration and we decided to get 2 blocks of the 2 middle seats, one next to each kid but you can’t walk between the seats as there is a divider. Luckily our cabin was only 4 rows so we could duck through the galley when needed. It was as a pain at times, but now they aren’t babies it’s not too bad. The only other option is to have either us or a kid on the outside single seat, facing away from us, so also not ideal!

Both kids had been doing well up until we boarded, at this point, Soren, who had been trying to sleep on the floor of the boarding gate (and Qantas Club) lost the plot when Anto took him to the toilet before take off. A huge melt down with head butting and sobbing ensued.  As neither of us could reach his seat and we were about to taxi for take-off we had to calm him down as best we could and then he finally fell asleep just as we took off.  Astrid resisted sleeping mightily, despite the ridiculous hour, and finally napped just after take off. Once we could finally lay their seats down they both slept peacefully, leaving us in peace to enjoy some business class service (well at least Anto could).

It was now officially my birthday in both Singapore and Australia.  However, it didn’t start out well when I didn’t get my vegetarian meal, which we both had ordered and confirmed. I wasn’t that hungry but it was over a 12 hour flight and they had no breakfast for me either. My hostess was not exactly willing to go find me something and was offering lettuce. I finally got some cheese and ice cream but the service was definitely lacking.

By a couple of hours into the flight Anto and I decided we needed to sleep and the lay-flat seats were pretty good and I managed a few hours.  Unfortunately Astrid woke up about 6 hours into the flight and then ensured that I wasn’t going to sleep much more. Soren managed a few more hours but all of us were wide awake by 2am Helsinki time, with 4.5 hours to go. It was now morning in Singapore and our bodies defeated us, far from ideal! 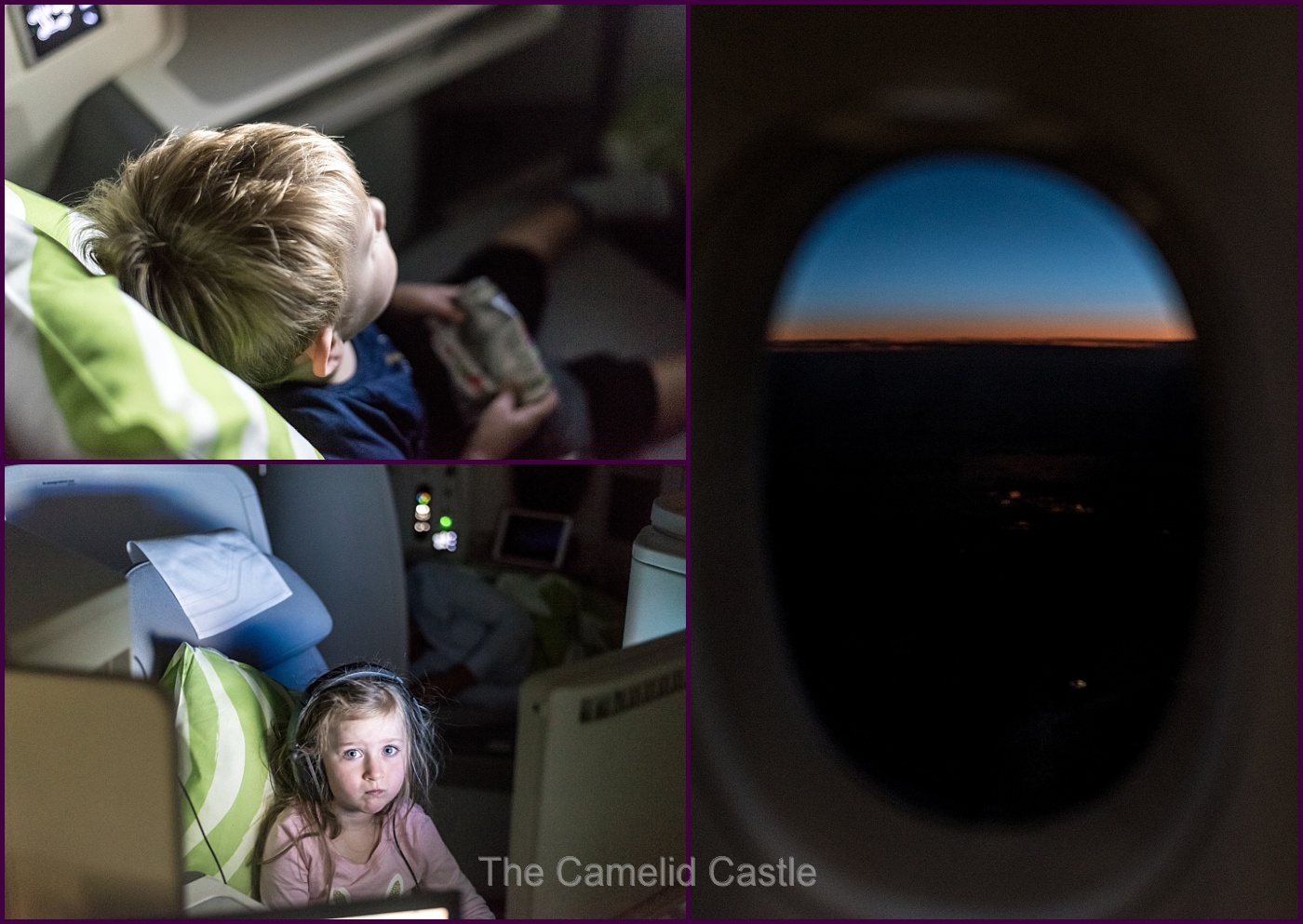 Luckily the comfy seats, snacks, wi-fi and pull out tables in our pods made for a comfortable way to pass the time even if we knew were going to be shattered by the time we even made it out of the airport, let alone to hotel check in time. We even managed to see the sun peeking over the horizon for the last few hours of the flight!

Despite the lack of sleep, all things being equal the almost 13 hours on the plane passed rather quickly. Business class (even with little sleep and no decent food) is a vastly more pleasant experience than economy!

The kids well and truly enjoyed their breakfast.  Astrid was more than happy to be treated like a princess, and was keeping her flight attendant on his toes.

As we were approaching Helsinki, we were watching the flight cameras and in the predawn darkness we could see the glow of snow piercing through the darkness, it was definitely cold out there!  It was somewhat surreal seeing snow on the ground after being in the tropics of Singapore just 13 hours earlier……..

Up next, spending my birthday in a very cold Helsinki, Finland!!!