For the second full day of our holiday, we headed North to the beautiful city of Brugge (Bruges), in the northwest province of Flanders. Anto, Astrid and I had visited Brugge back in 2012 and thoroughly enjoyed ourselves, despite it being on the chilly side.  This time we were staying a few days and hoping to enjoy some Spring sunshine. It also happened to be Anto and my 12th wedding anniversary, so we were hoping for some lovely weather and scenery to help us celebrate.

After an early night the previous night due to jet lag, we weren’t expecting a big sleep in, especially since we had changed time zones by 10 hours.  I did manage to sleep until a bit after 5am and the kids until just after 6am, which was actually pretty good for our first night.  Unfortunately though, the breakfast didn’t start until 8.30am so we tried to keep the kids occupied in room quietly, which was difficult with not very sound proof room.  TV on the tablet to the rescue while the adults repacked everything for our departure post breakfast.

We were all pretty hungry by the time breakfast rolled around and we were the first ones up to breakfast. As B&B DRUUM is a small hotel it was a shared breakfast in a small room, but my goodness it was tasty.  There were a selection of great Belgian cheeses, fresh-baked bread, butter, jams and our favourite speculoos spread.  Plus delicious croissants, coffee and freshly squeezed orange juice.  It was fabulous to be back in Europe again!

Another day in Brussels would have been nice, but we had other cities to explore.  After the freezing and below zero apparent temperatures of the day before, today was a sunny day and still crisp but much warmer. We’d all rugged up with coats, gloves and beanies and it turned out to be a bit of overkill for the temperature.

Given the cobblestone dramas of previous day when we’d arrived with the bags, we decided to book taxi from hotel to train station to save us the couple of kilometres of walking on cobbles.  The taxi was efficient and got us to Brussels-midi station with 15 minutes before the train.  We grabbed tickets, got up to platform and found that the train was delayed, and continued to get more and more delayed. Eventually it arrived about 15 minutes late. The train was busy but we got seats and the bags kind of stashed out of the way.

The train was supposed to take an hour through to Brugge but after we got on it turns out it was terminating in Ghent, and was also the non-direct train, stopping frequently. One hour 15 minutes later and we had only made it as far as Ghent, making us late to check in to the Brugge B&B, which had specific bag drop hours. Luckily we had emailed them from the train and let them know.

We had a 15 minute wait at Ghent station, again it was rather cold waiting around. The next train was packed, so Anto ended up in vestibule with all the bags and lots of other people, while I took kids into a carriage and stood in a packed aisle for the 25 minute trip.

Finally off in Brugge, along with everyone else on the train, and it was quite warm (around 12 degrees) and sunny so we decided to walk the 1.3km to the B&B with the bags.  Given the hordes of people heading in the direction of Brugge old town it wasn’t hard to find the way. There were quite a lot cobblestones but it was nowhere near as bad as the previous day in Brussels (and we’d had more sleep) so made it to the B&B in a little over 15 minutes.  Despite being an hour late the lovely lady at the Saint-Sauveur Bruges was still around to let us in and our room was ready.

Again it was a fabulous accommodation choice.  Our room (more like a suite) was enormous with lovely views over neighbouring roofs and the kids had their own room with a bunk bed. 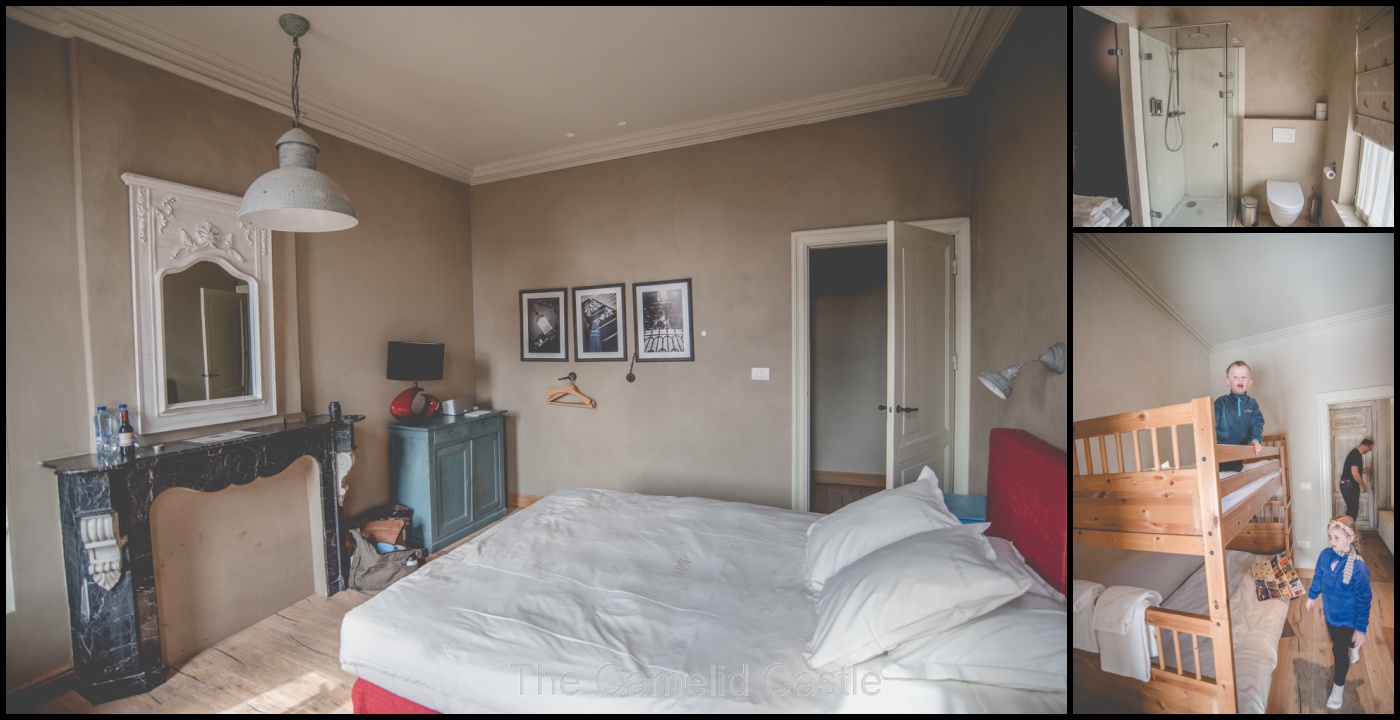 Keen to make the most of the beautiful day, we stripped off some of our coats and headed out for an explore while weather was cooperating.

Being a Saturday and a beautiful day, there were people everywhere.  Bruges is a popular tourist spot and the streets were quite busy and the cafes packed with people enjoying the sunshine.  We wandered the old town area and walked down to some of the main canals, which were buzzing with tourist-filled boats. 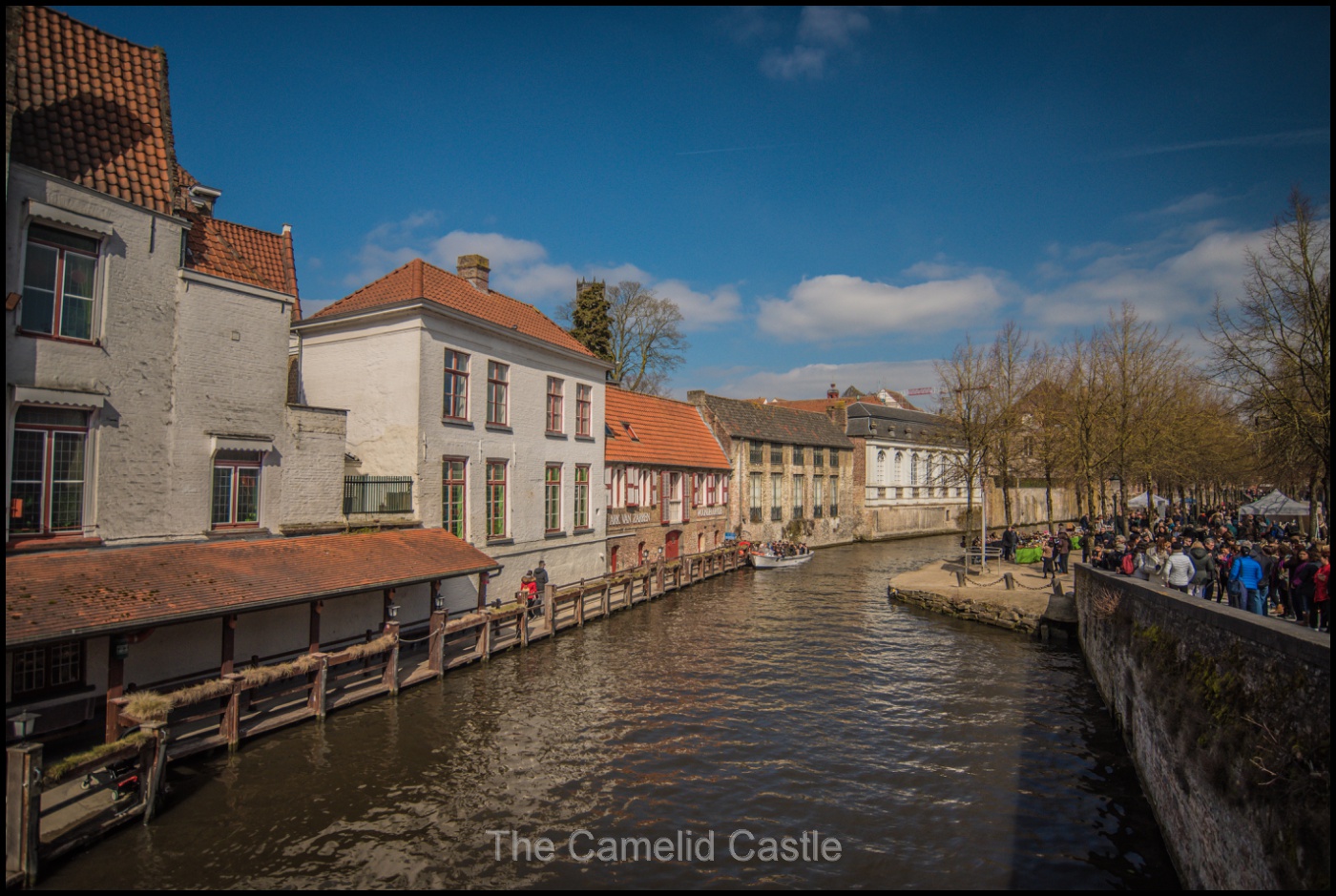 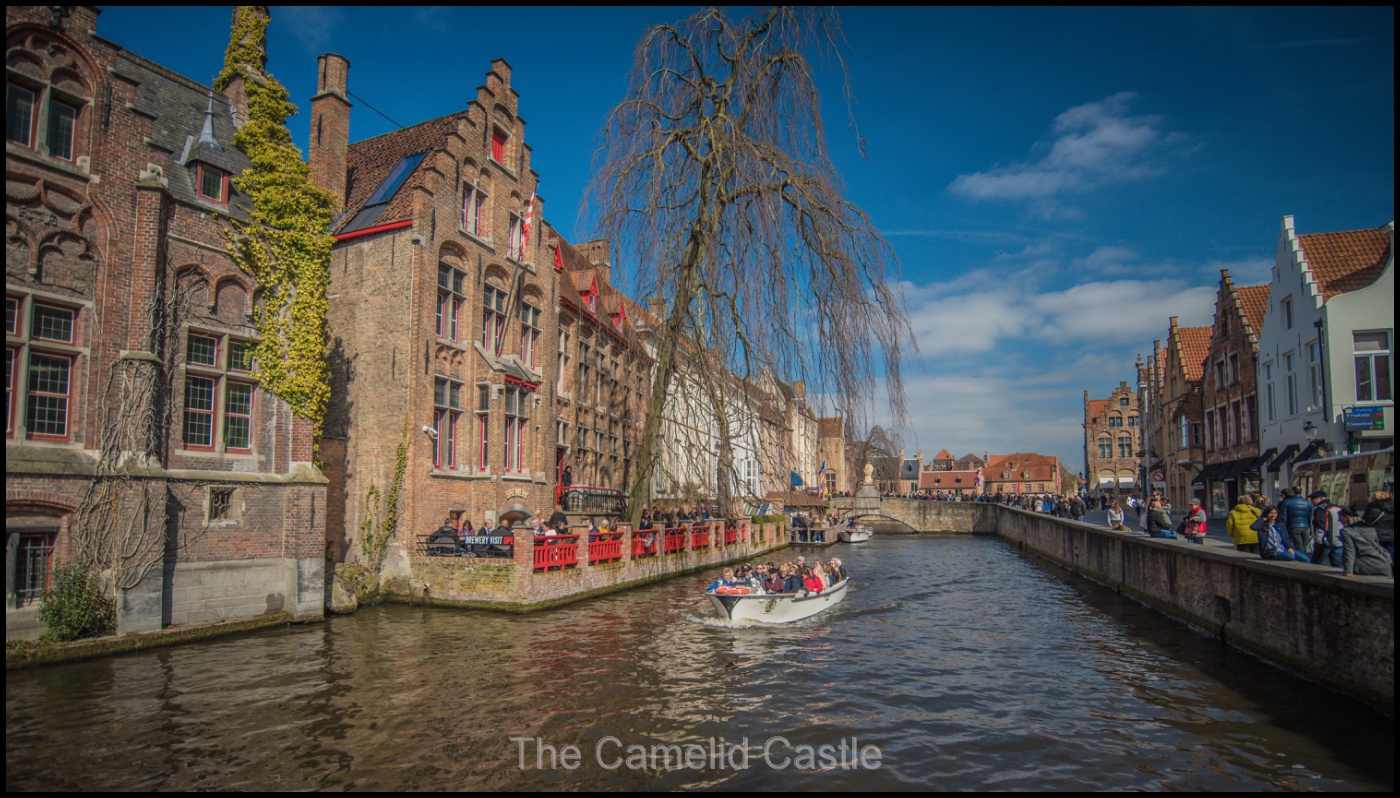 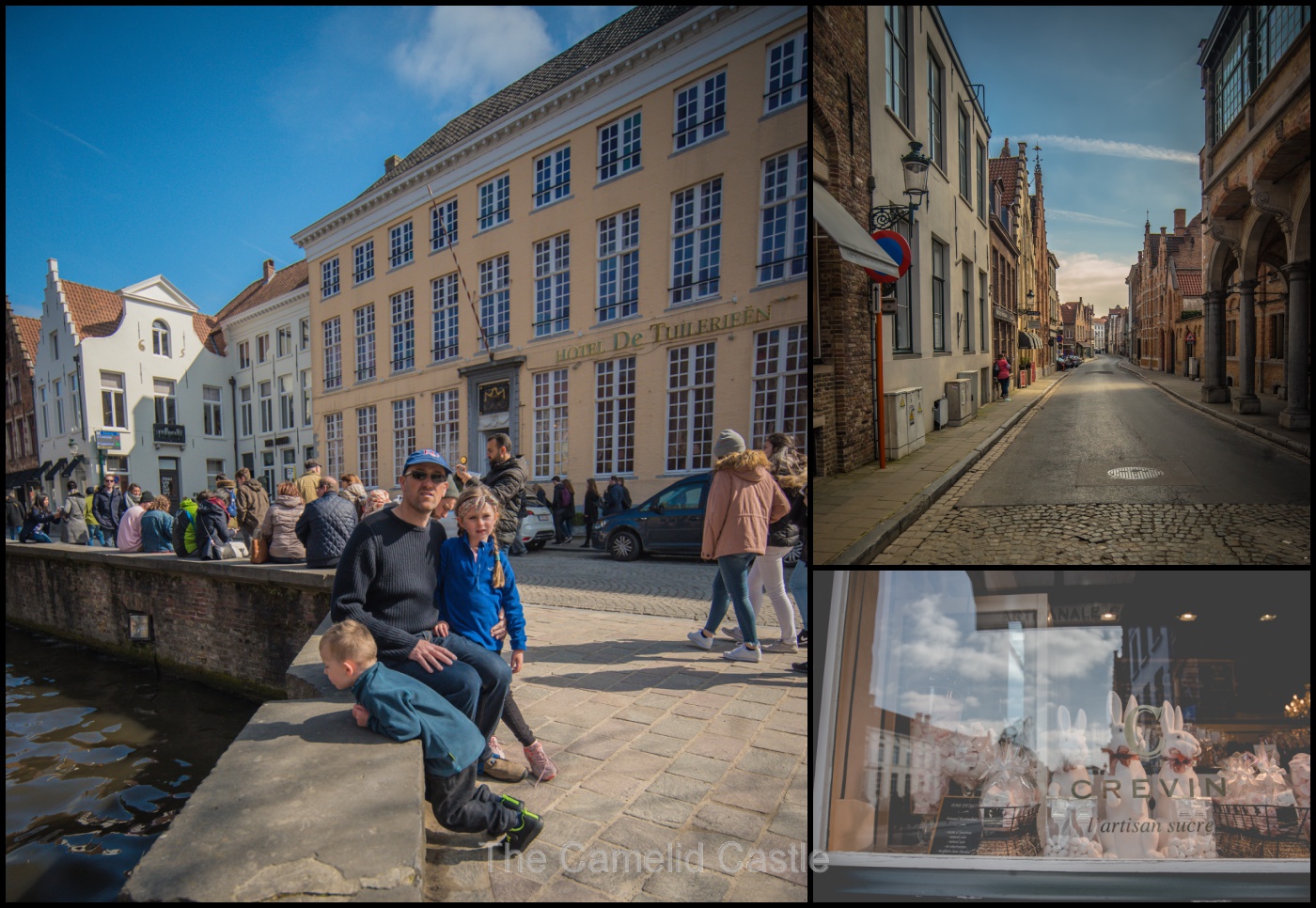 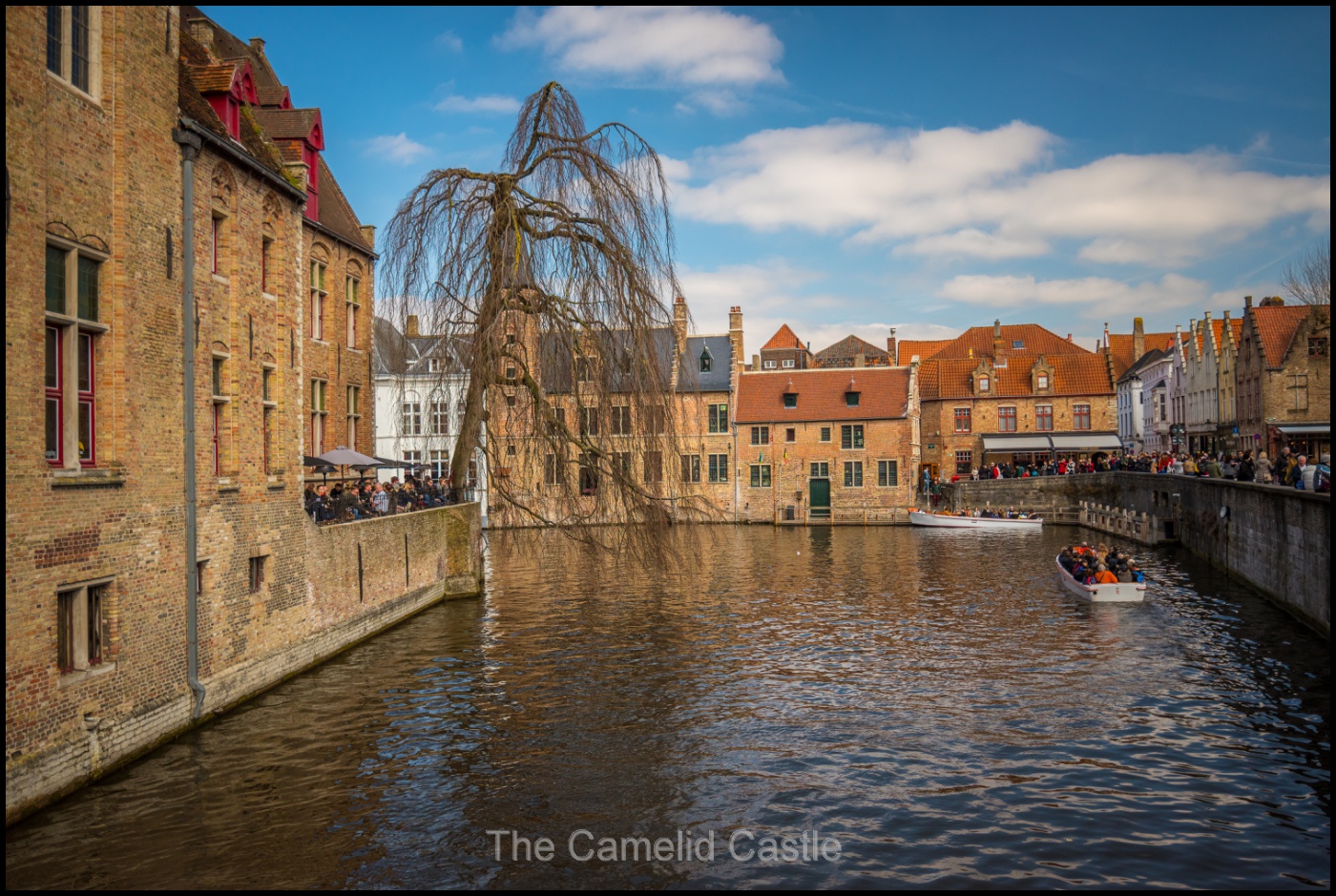 Our previous visit was in the Winter, and mid-week, and while busy, there were nowhere near the same number of people.

Next we wandered to the main square, Markt square.  This is surrounded by beautiful buildings and an impressive bell tower.  It’s also the start and end point for horse and carriage rides, which fascinated the kids.  They loved watching the horses (they ended up getting a ride later during our Bruges stay). 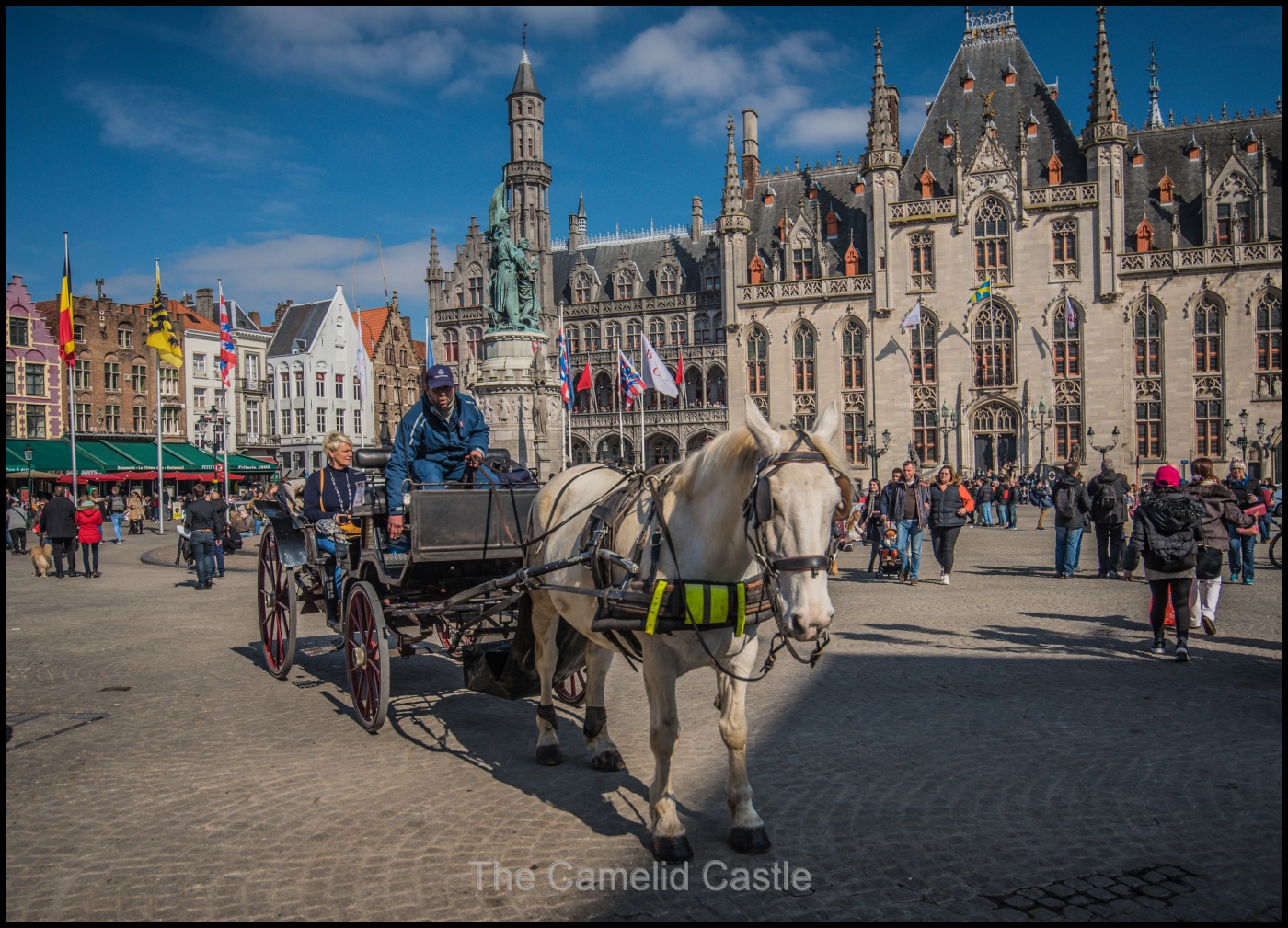 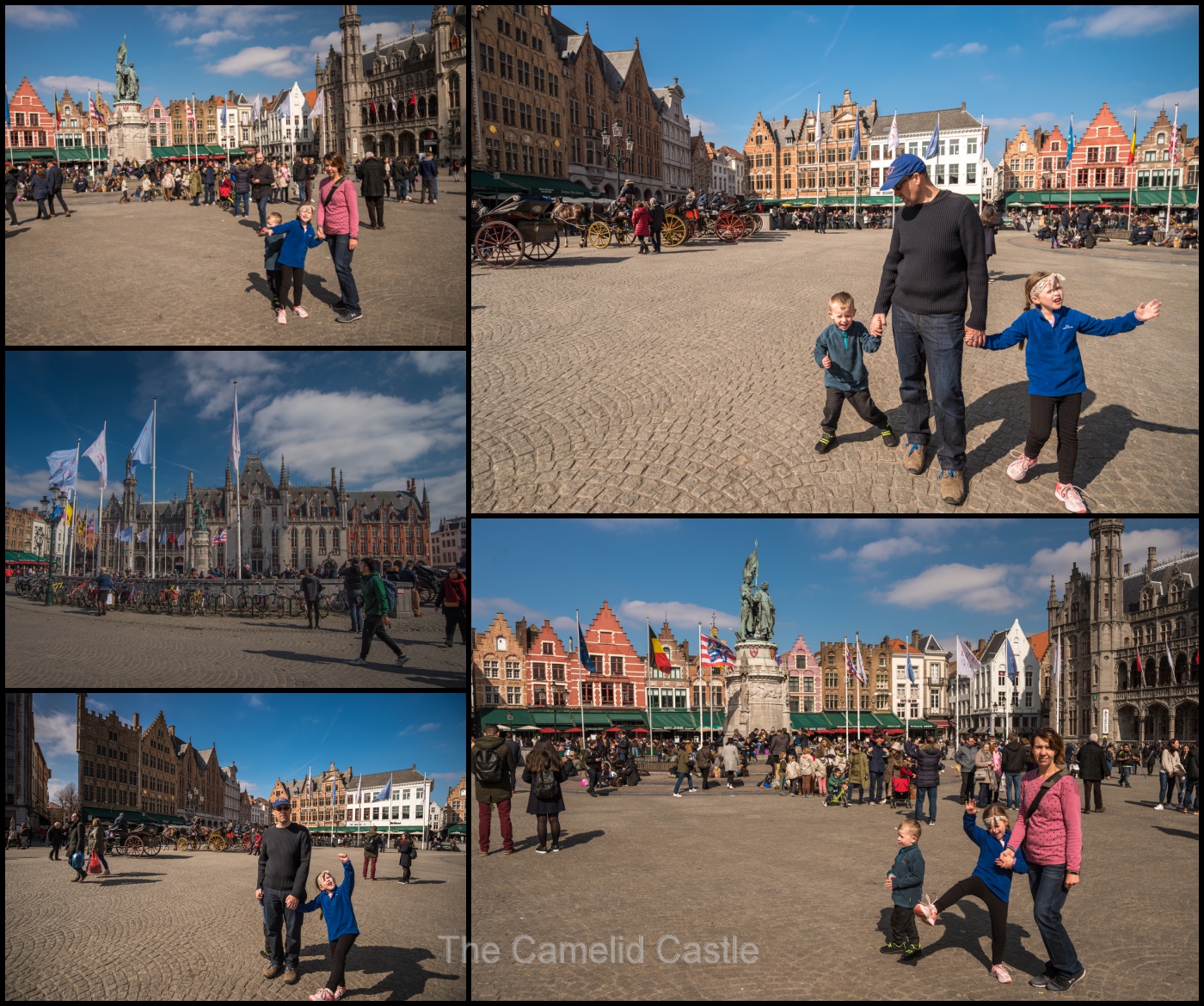 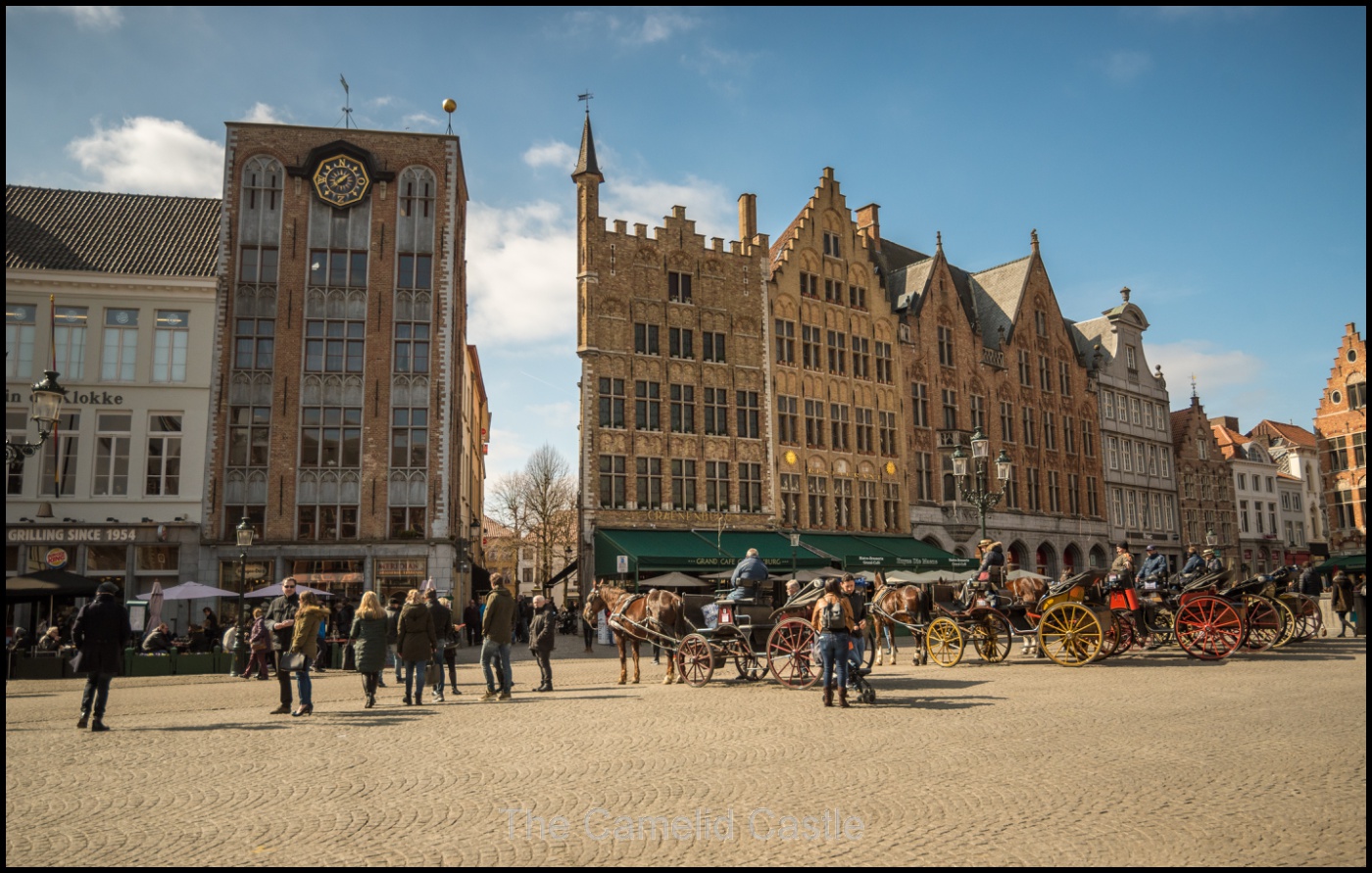 It was now well and truly lunch time,  so we were on the hunt for a cafe.  There were plenty to choose from but everywhere busy, so we were having trouble getting a table.  An over tired Soren was rapidly losing the plot, so we quickly found somewhere with seats that had decent options and sat outside as it was quite a pleasant temperature.

I had some cheese croquettes, Anto the meal of the day which was pâté, Flemish stew, a local beer and chocolate mousse. The kids shared a croque monsieur and helped me with a banana and choc waffle with cream. It’s tough being in Belgium! 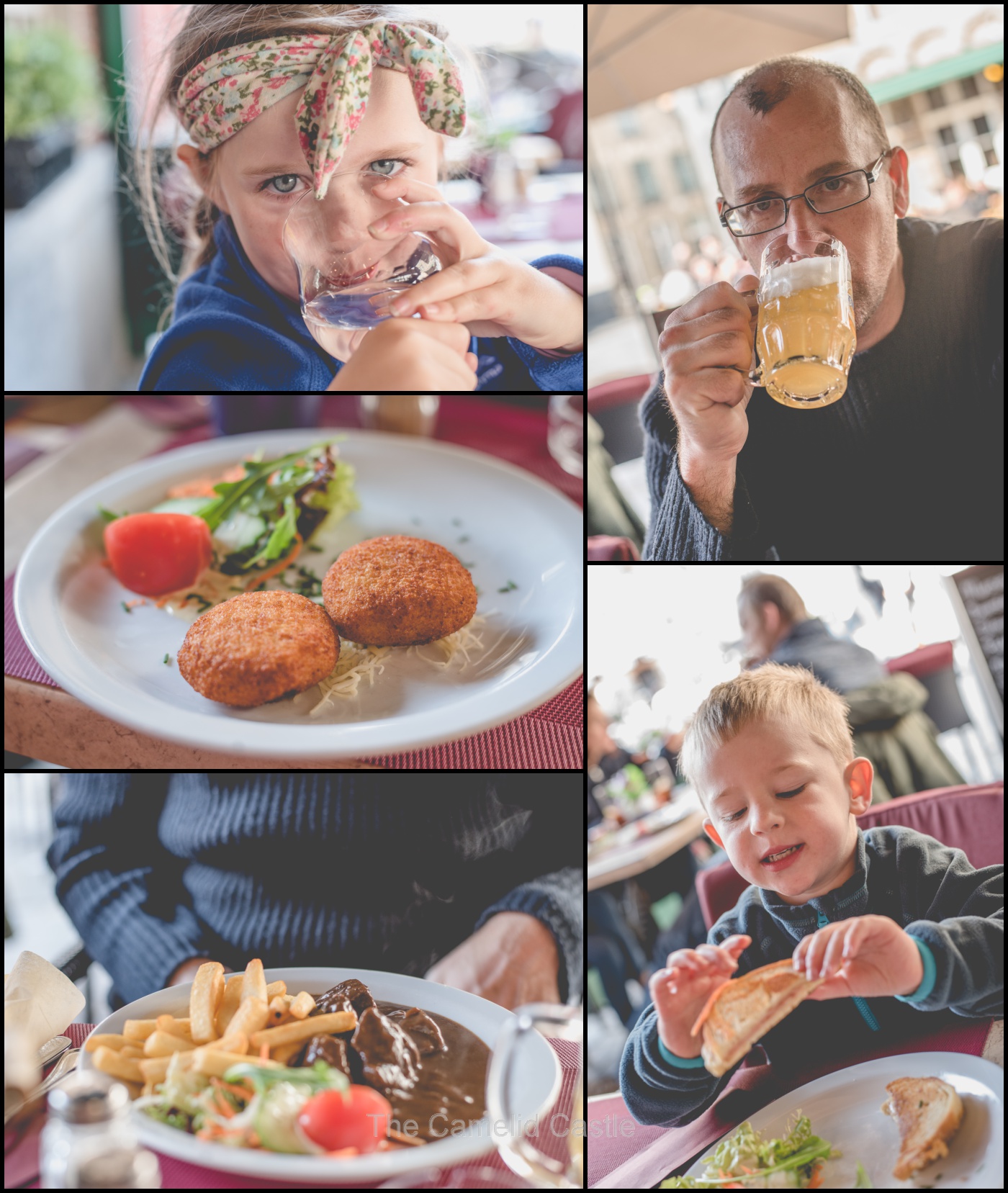 All tired and still feeling the after effects of the big time change from Australia (and the lack of sleep on the plane) it back to the hotel for a nap. It was a gorgeous day and it seemed a shame to waste it but sleep was desperately needed and it was very pretty walk back to our hotel…… 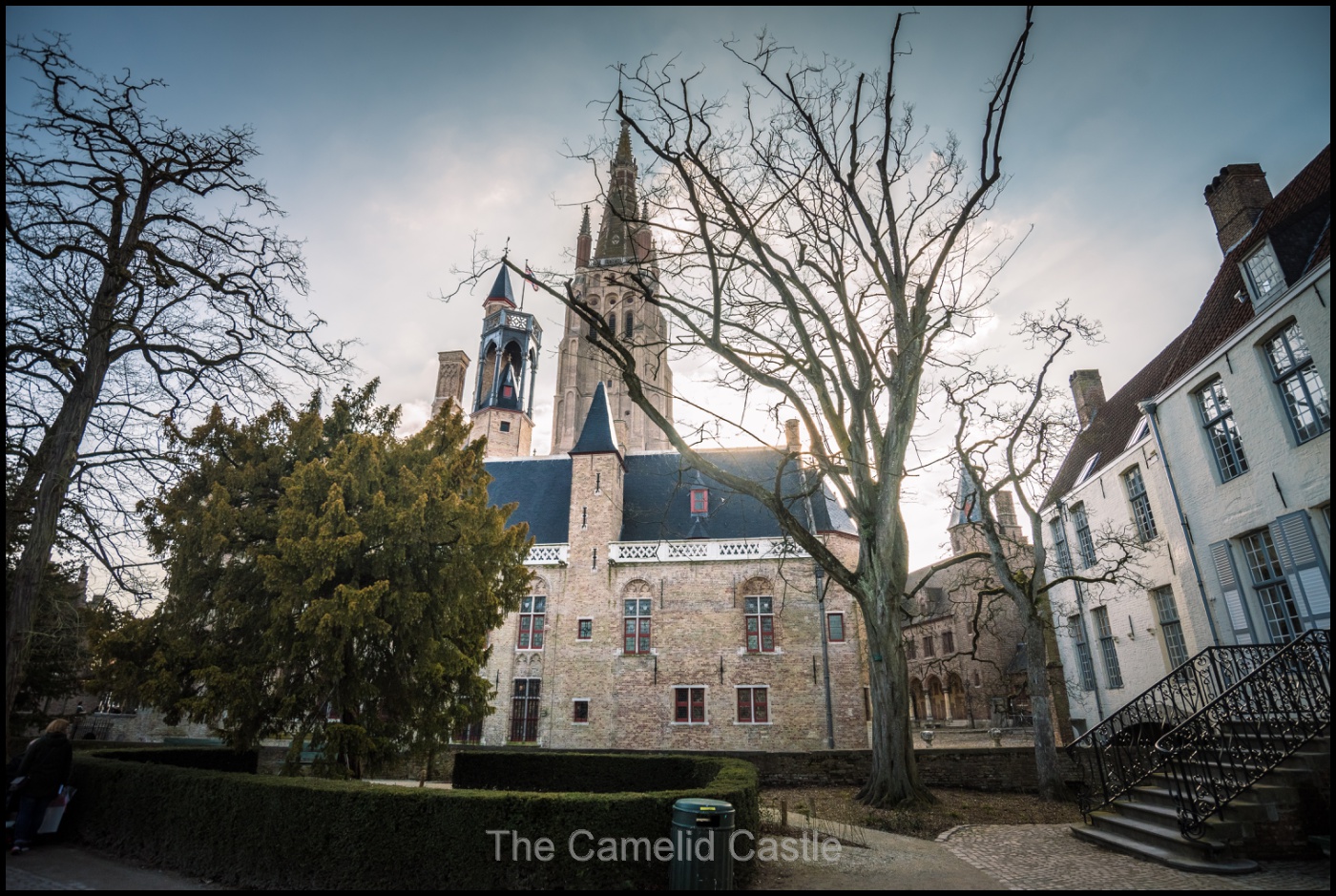 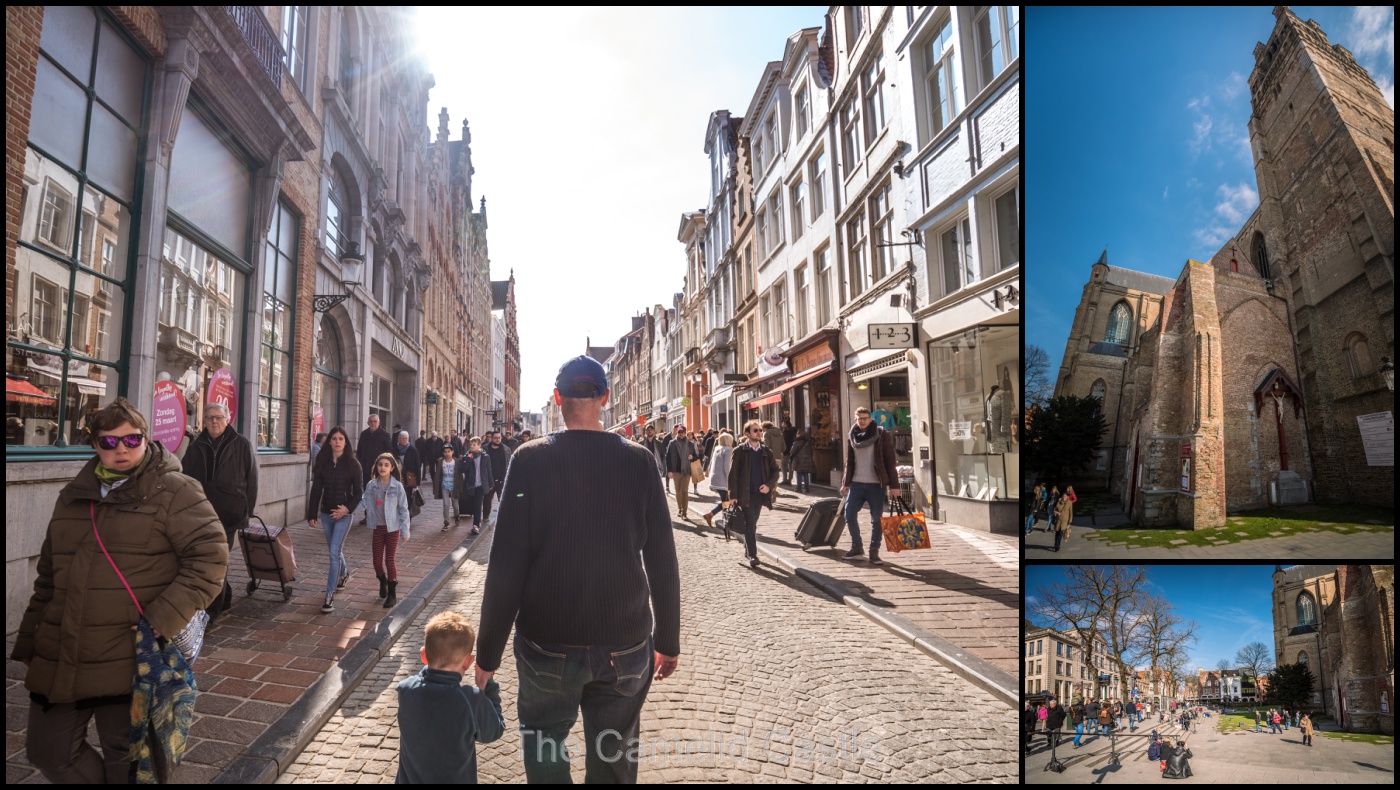 It was now almost 3pm, so there was only time for a short but necessary nap.  The kids were not keen on getting up an hour later (I felt similarly). Finally with the promise of investigating more chocolate shops, we got them out of the hotel and walking around while it was still warm.

The first stop on our afternoon walk was the Church of our Lady, which had some pretty gardens, and happens to be near the very scenic Bonifacious bridge.  This the smallest bridge in Bruges, and a popular photo spot as it’s very pretty and offers great views of the canals. 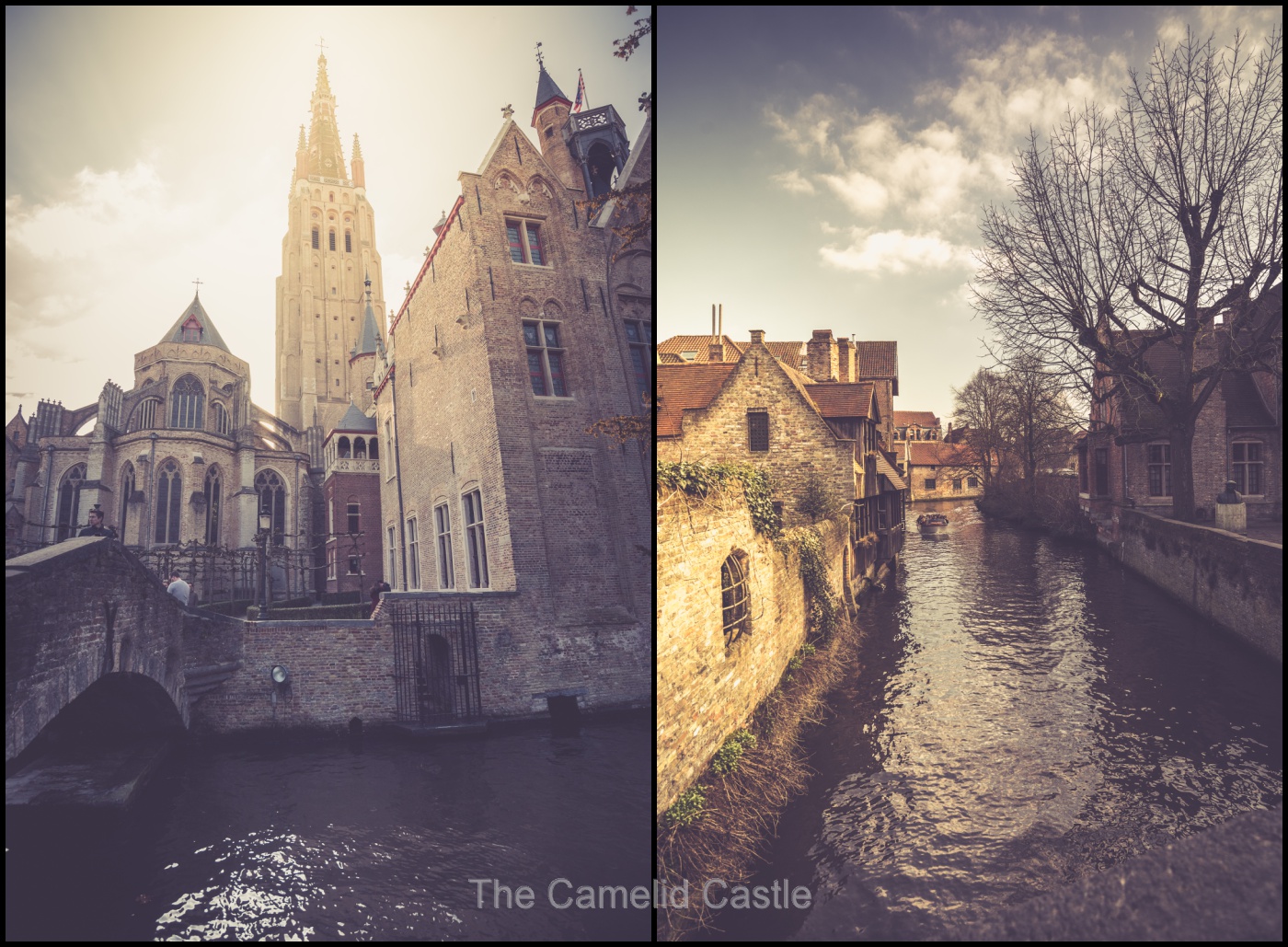 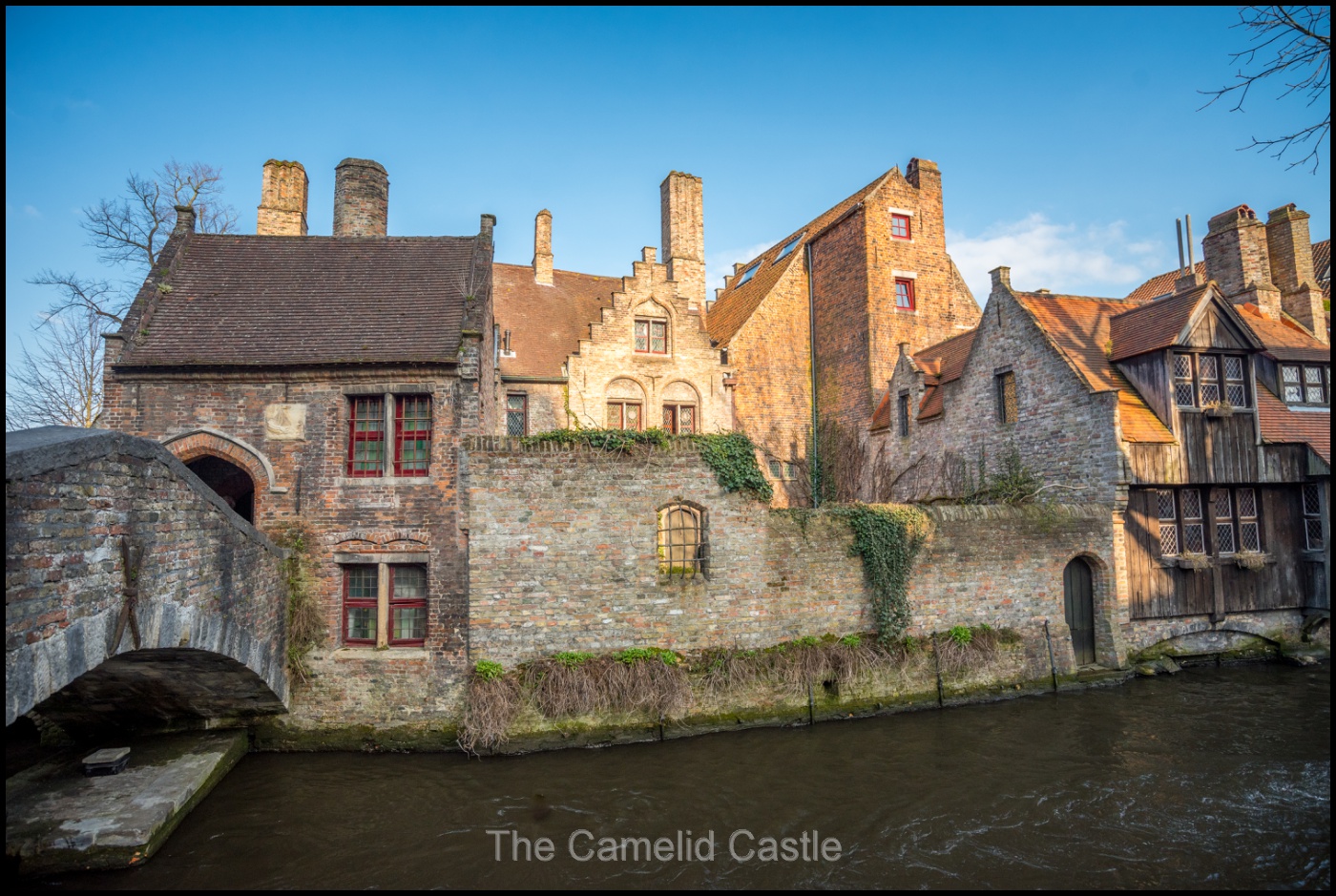 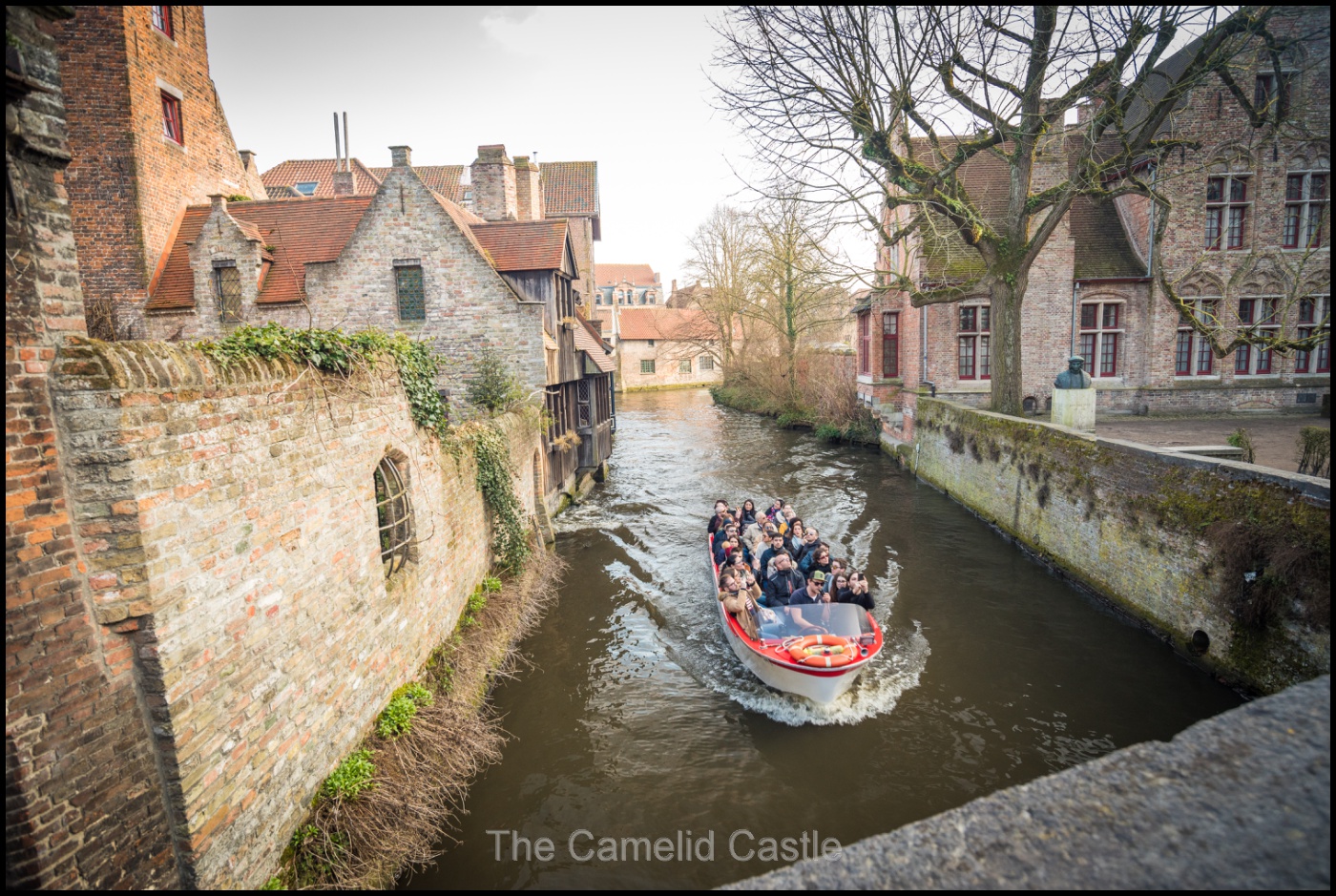 Soren loved watching the boats zoom by under the bridge!

Our next stop was to Koningen Astridpark, we probably would have gone for the name alone, but it was a very pretty park, a former monastery garden and had a cool playground. Astrid loved the idea of having a park named after her (or so she thought!).

The kids would have stayed playing all day, but the temperature was dropping and we had more exploring to do.  Next it was back through the winding cobblestone streets in search of chocolate shops.  We watched plenty of chocolate making and made a few purchases along the way. The kids again scored some free samples….. 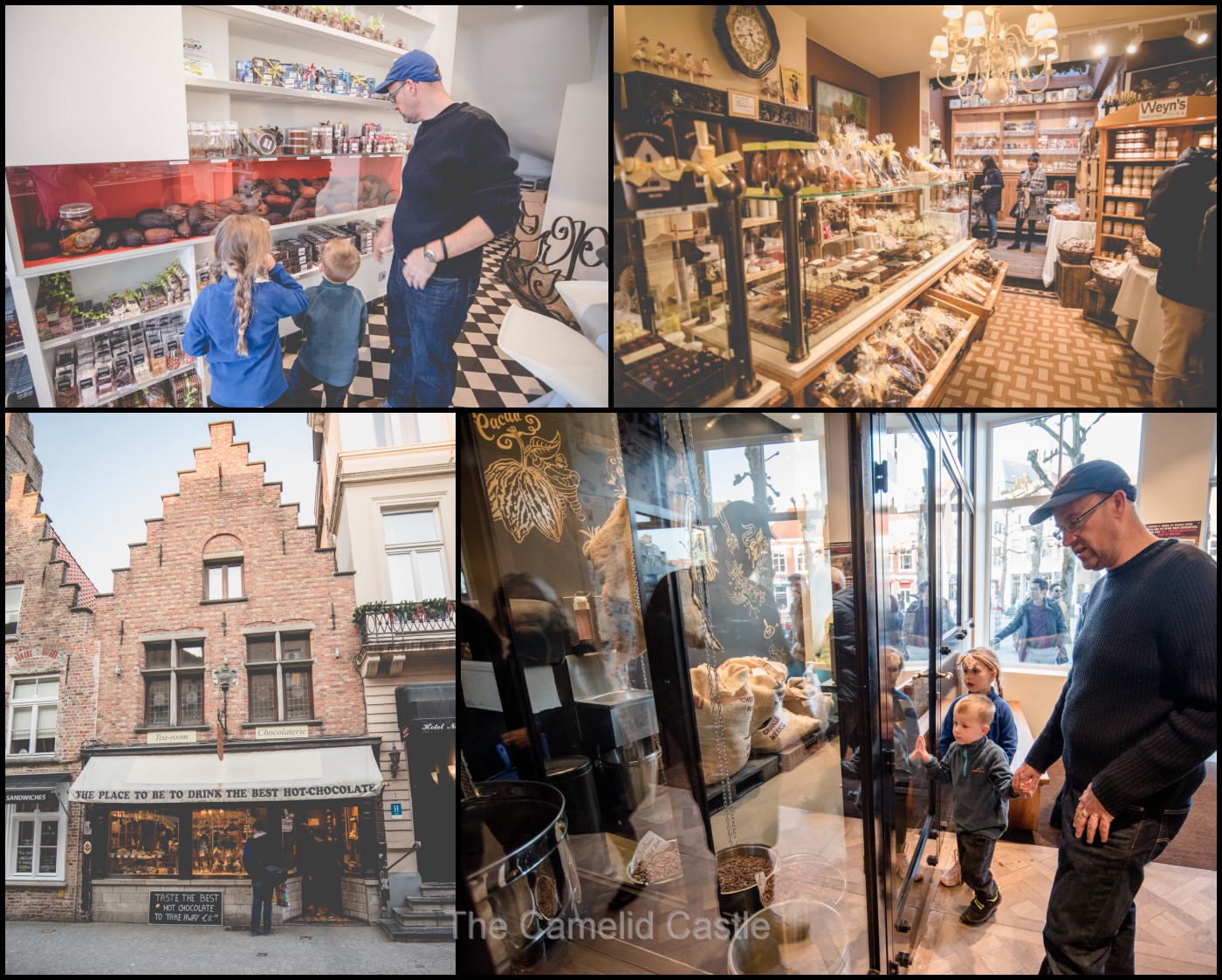 When we’d stayed in Bruges 5 years earlier, we had the most amazing dinner at a restaurant we’d stumbled across.  We were keen to go back but couldn’t remember the name.  Plenty of pre-trip research hadn’t shed any further light on the matter. So imagine our delight when we stumbled across it again (ironically it was quite close to our hotel).  The restaurant didn’t open until 6.30pm, so we figured we’d wander until then and hope to get in when they opened.

It was starting to cool off, but in the late afternoon the light was very pretty so we enjoyed another visit to Markt square and a peruse of the restaurants on offer. 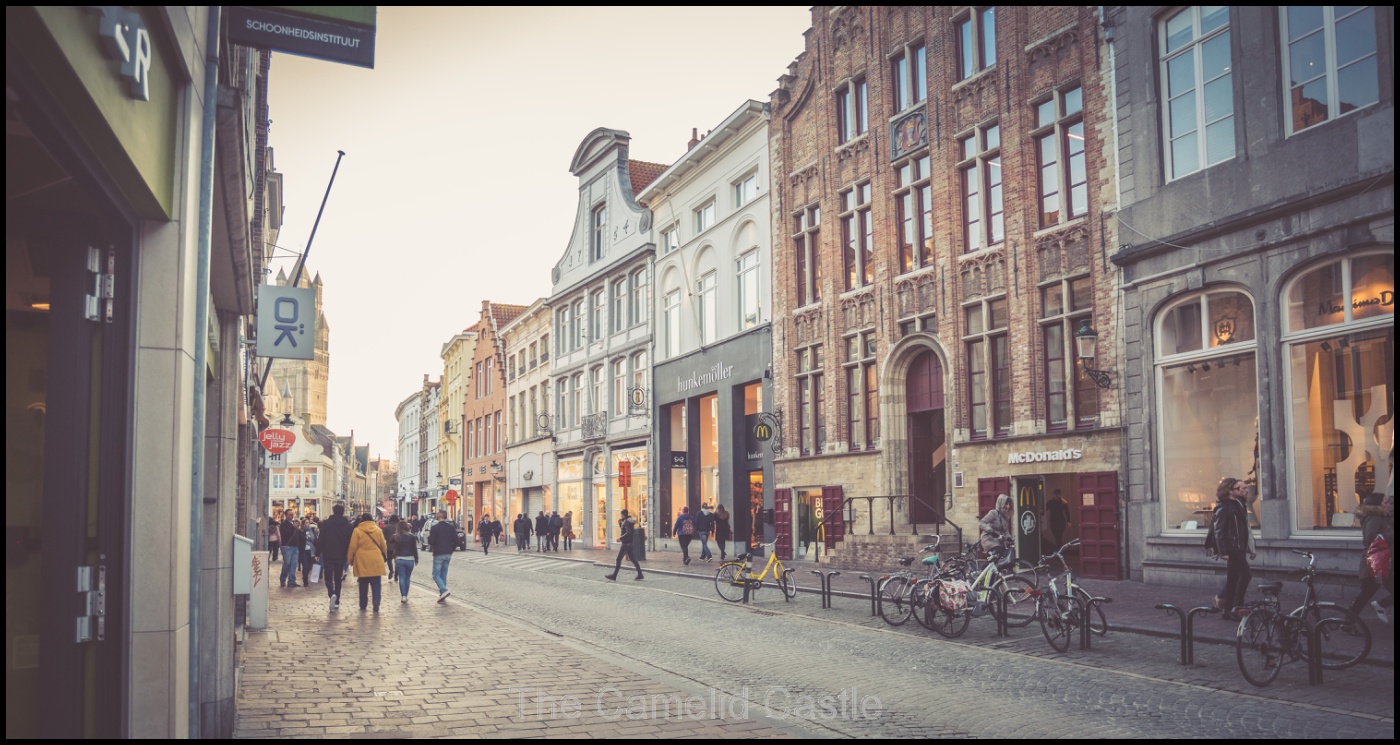 As the afternoon wore on, the crowds were thinning a little, although there were still people everywhere. We enjoyed another wander along the Rozenhoadkaai (waterfront). There are many kilometres of canals in Bruges, which are mostly full of tourist boats.  Locals tend to stick to bikes! 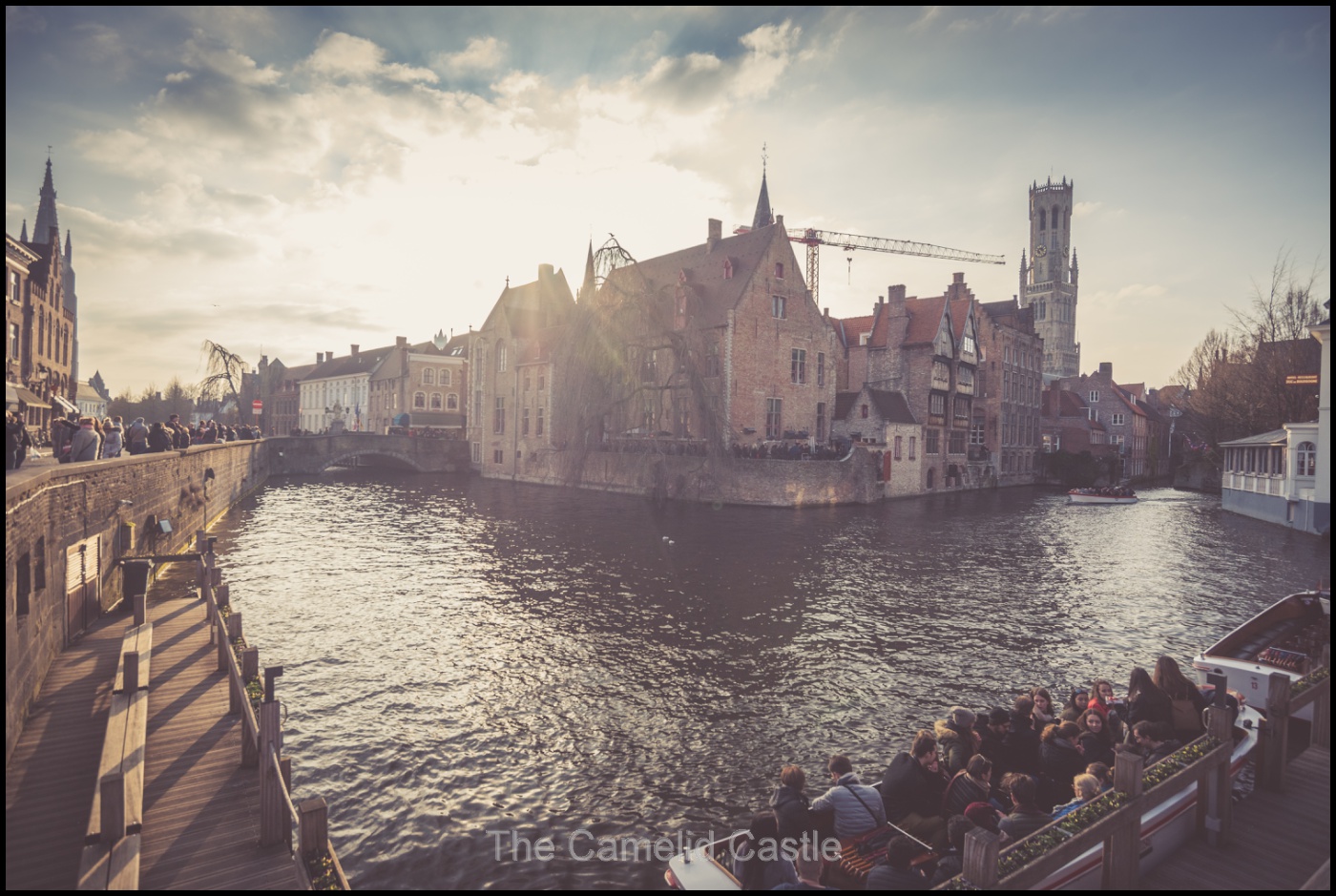 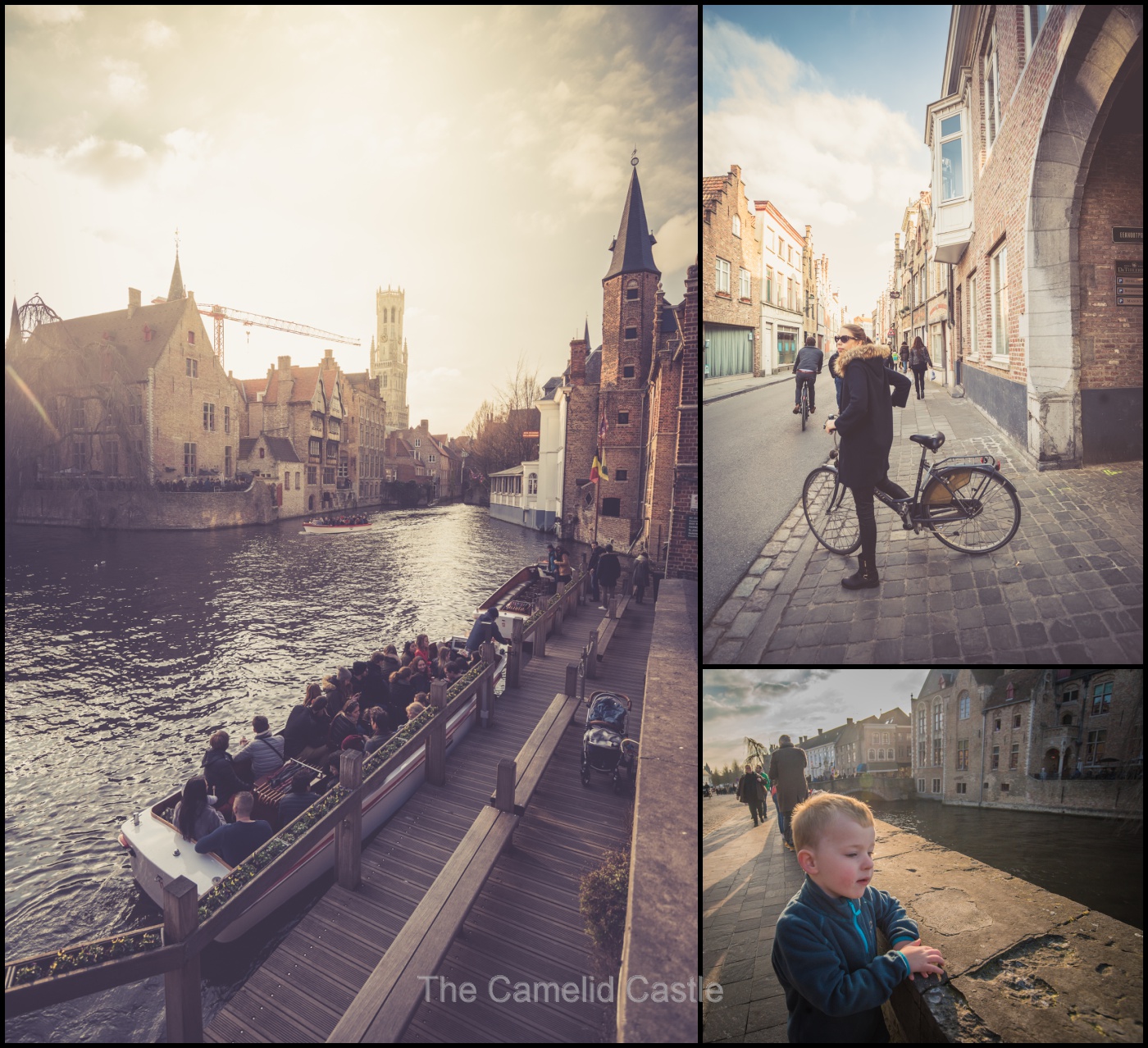 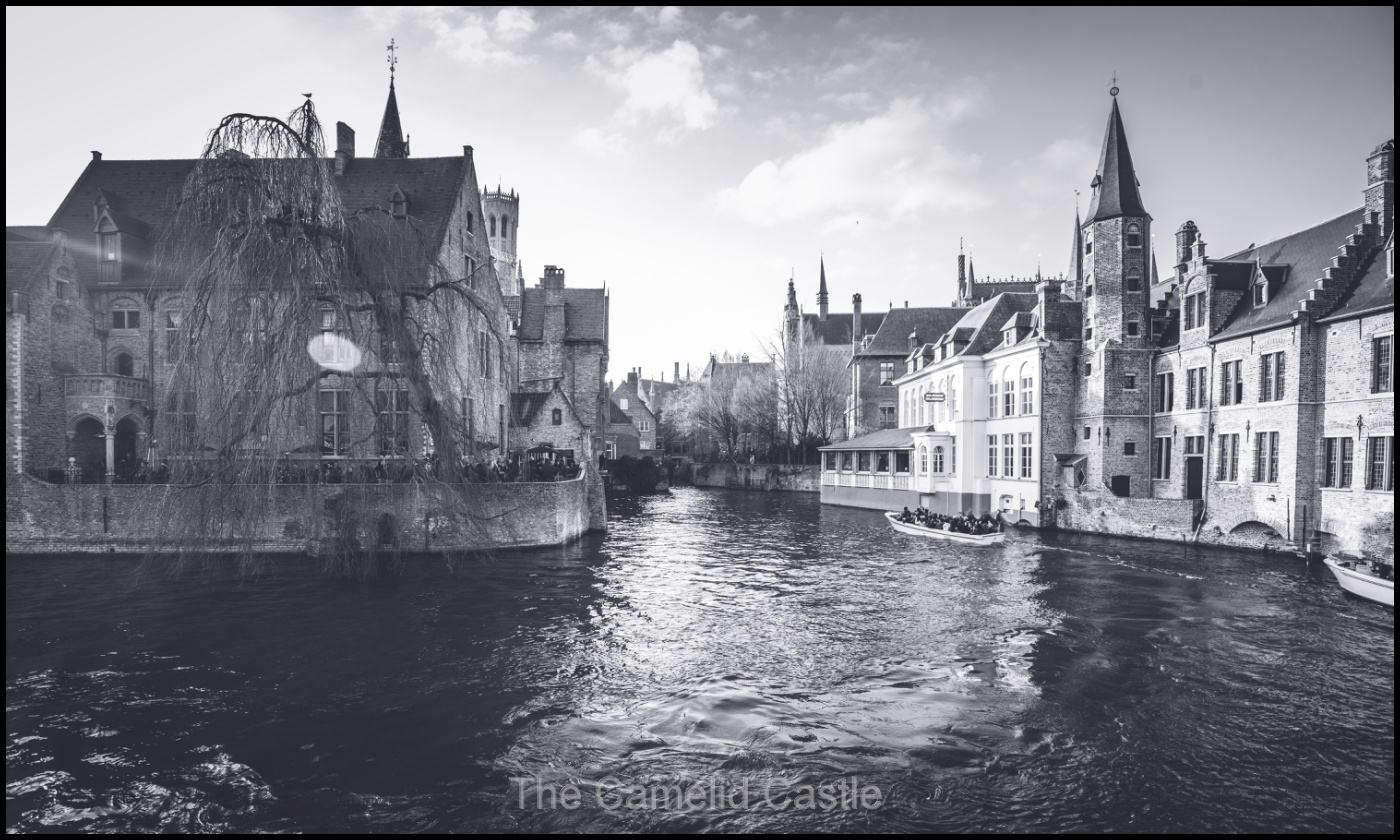 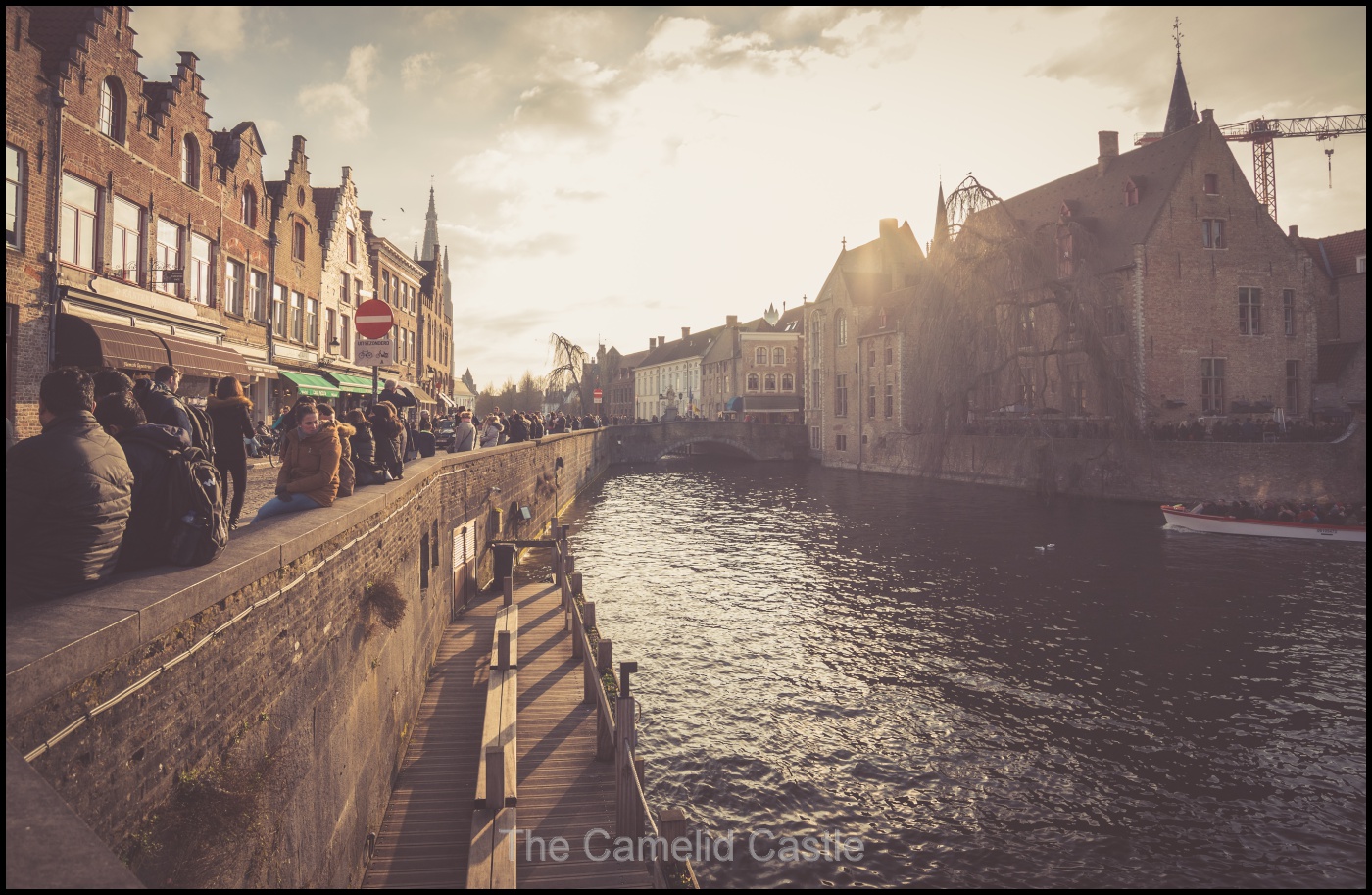 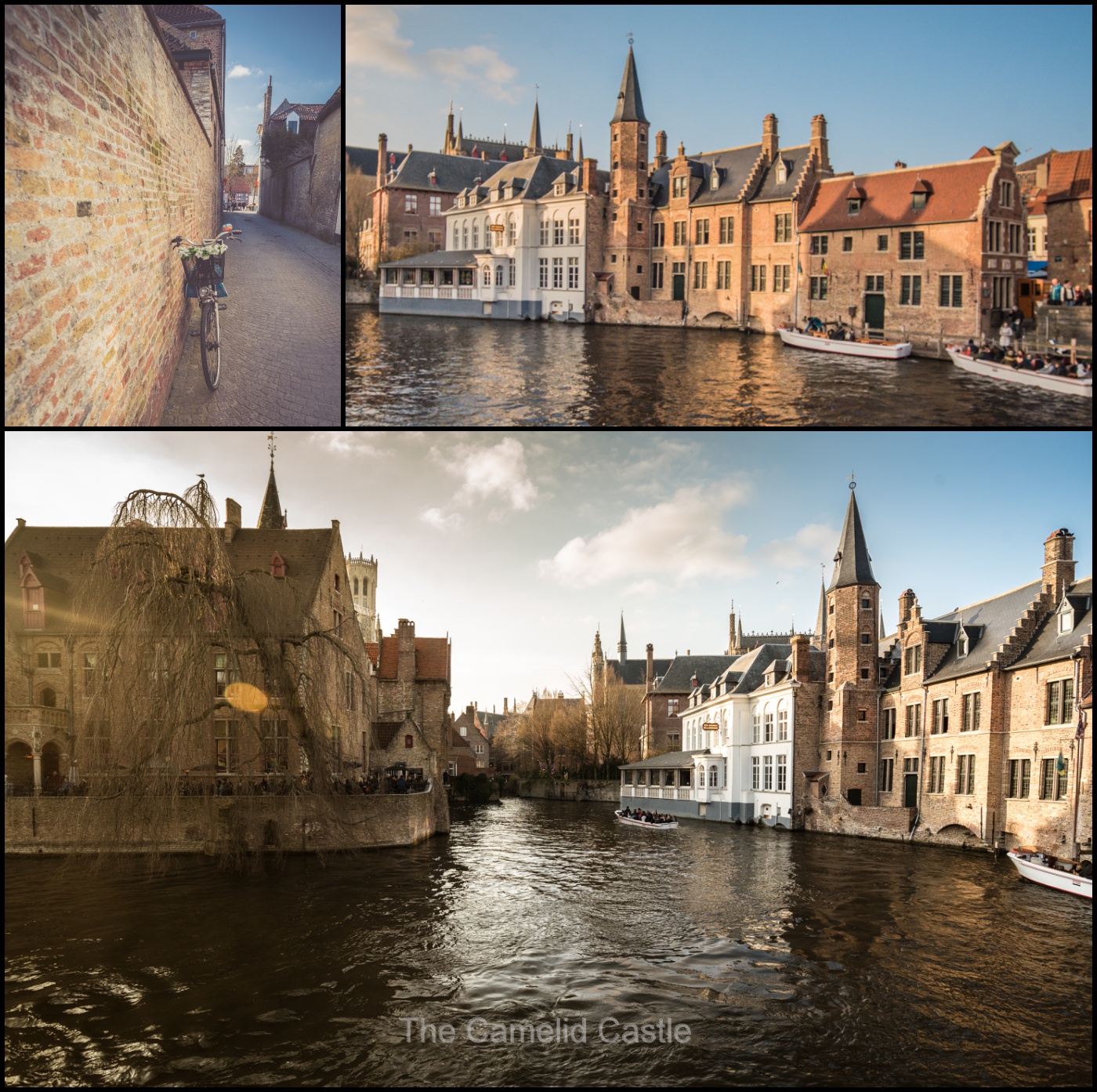 Eventually it was 6.30pm so we found our way back to the restaurant, which for the record is called De Buhne, but it’s tiny so no there were no tables available, nor for the next night. We were disappointed but not surprised. It would have been too good to be true to get to have our wedding anniversary meal there.  Instead we wandered back towards market square to find something quick and easy.  It is a little tricky finding restaurants with actual vegetarian options, but we settled on a bistro in the Markt square that seemed pleasant, had vegetarian options and had tables.

The kids were now very tired and not that keen on eating so we ordered them some cheese croquettes (yes they are a Belgian staple and very tasty) and some mini buns with pâté for them to share. I had a provencale omelette, and Anto a burger and a local beer.  The waiter thought the kids were cute and gave them their own ‘mini beer’ which excited them, even if they weren’t actually allowed to drink it! 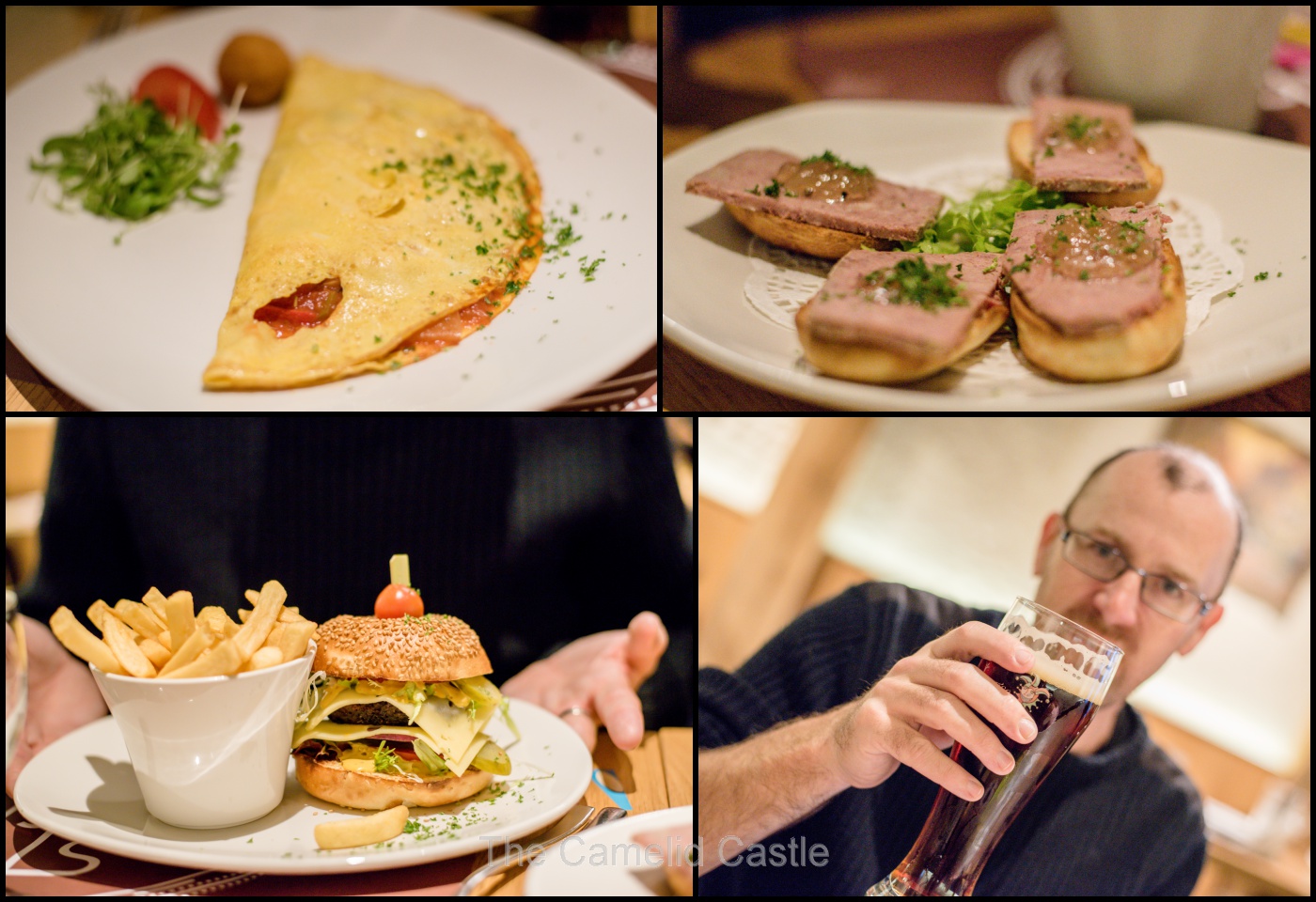 By the time we finished dinner, the temperature had dropped dramatically.  As we’d been wandering around for hours, and it had previously been warm, we’d gone out without coats, which resulted in a rather chilly  walk back to the hotel. Even the restaurant staff thought we were nuts.  Despite now being cold it was a nice night and at after 8pm there were still quite a lot of people out and about.

The kids were rather keen to get to bed after another long and busy day exploring.  We were still all down on sleep, and there was a time change the next day to European Summer Time, so another not too late night was in order. We were glad we had another 2 days left in Bruges as we hadn’t yet seen all there was to see and it is such a beautiful city, we were keen to explore further (and do a lot more chocolate and waffle eating!). It certainly hadn’t been a bad way to spend our 12th wedding anniversary though!

Daily statistics for Saturday the 24th of March, 2018 in Brussels and Brugge, Belgium – the minimum temperature was 1 degree and the maximum 12 degrees, with a mean of 8 degrees. With sun and no wind, it was a beautiful (if still chilly) Spring day.  The total walking for the day was 10.5km, the kids were doing really well with their walking considering their little legs!

Up next, more of beautiful Brugge and a trip to nearby Ghent……