While we were staying in Bruges for 2 nights and 3 days we still wanted to revisit the beautiful city of Ghent which we had last visited in 2012…….. although didn’t actually see much of due to bad weather (and snow and an issue with lost passports).  Our plan was to catch the train to Ghent and catch up with my Dad who was motor-homing around Europe and had been in nearby Netherlands.

After doing well with jet lag the first couple of days, the third day curse hit and we all woke up at 4am, wide awake! To make matters worse, European Summer time had started overnight. Which we were aware of, but in our semi-delirious state had figured the time change in the wrong direction so got a rude shock in the morning when we woke up (after finally getting back to sleep after a couple of hours) and it was 2 hours later than anticipated.

On the upside this did mean the 8.30am breakfast at Saint-Sauveur was about to start. Again the Belgian breakfast was fabulous, with warm fresh pastries, good bread, freshly squeezed juice, meats, cheeses and freshly cooked scrambled eggs and bacon……plus huge fluffy pancakes! The kids were thoroughly spoilt and we all ate too much……

It was then upstairs for a quick rug up into our warm clothes and to pack up of day bags before heading to nearby Ghent. After a beautiful sunny day in Bruges the previous day, it was supposed to be similar temperatures again today in both Bruges and Ghent today. W,e didn’t want to take too many coats and scarves and have to carry them around all day.  Unfortunately it was currently only 4 degrees outside.  We opted to take some warm clothing and given it never warmed up all that much we were glad we didn’t entirely opt out of coats like the original plan.

It was foggy and grey and rather brisk walking down to the Bruges train station at 9.30am……… and very quiet compared to the swarming crowds of the previous day. 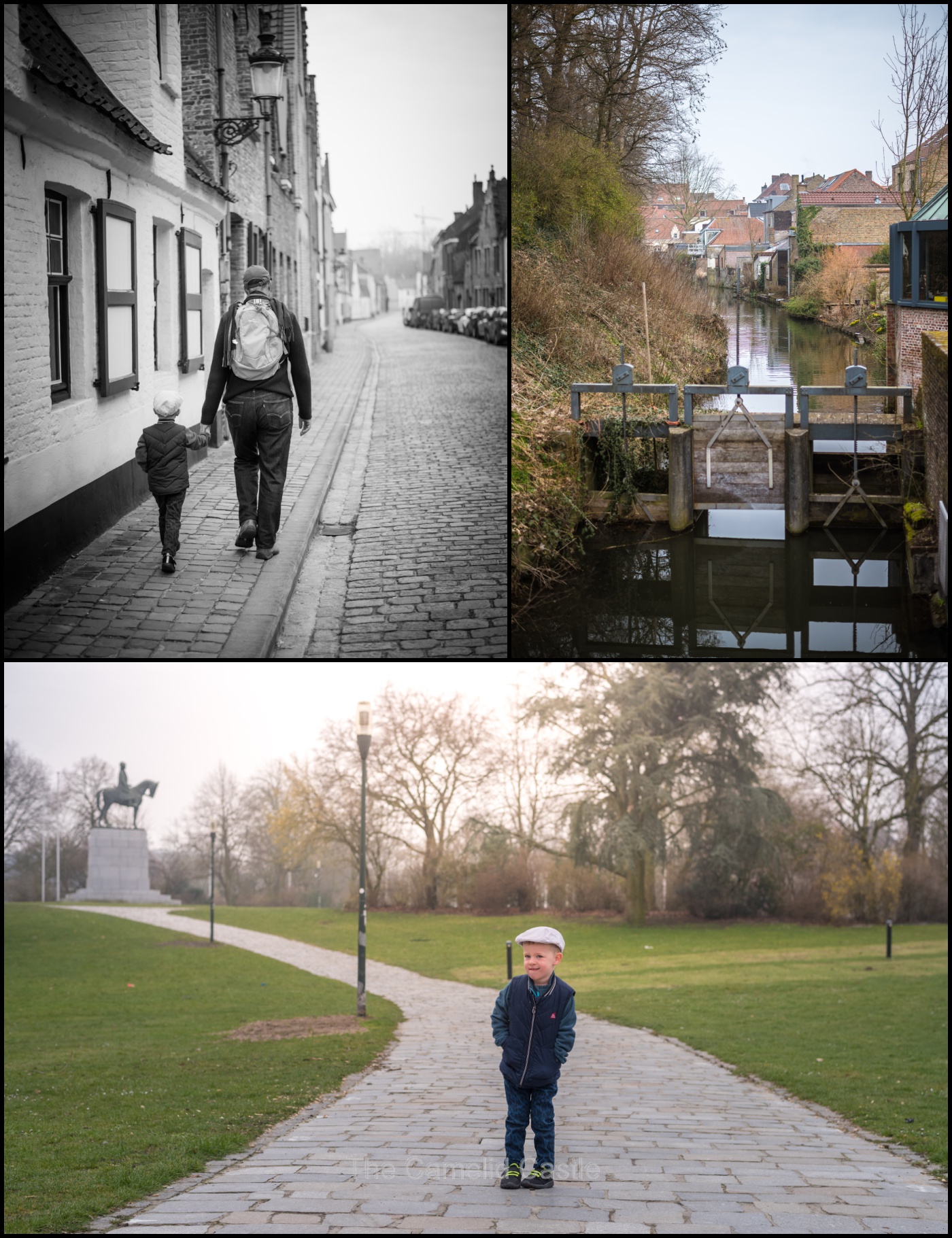 With our train tickets to Ghent purchased, we only had a short wait for the train, which for once arrived on time!  As a bonus it was almost empty, so we actually got seats this time! An efficient 25 minutes later we were off the train in a cold Ghent St Pieters station.

We managed to find my Dad and Kim outside the station. They had been staying at the Ghent campsite and had ridden their new e-bikes in to meet us. We managed to beat them to the station due to them taking some wrong turns but with their bikes now officially broken in, we helped them lock them up and purchased tram tickets for the short ride into the old town. 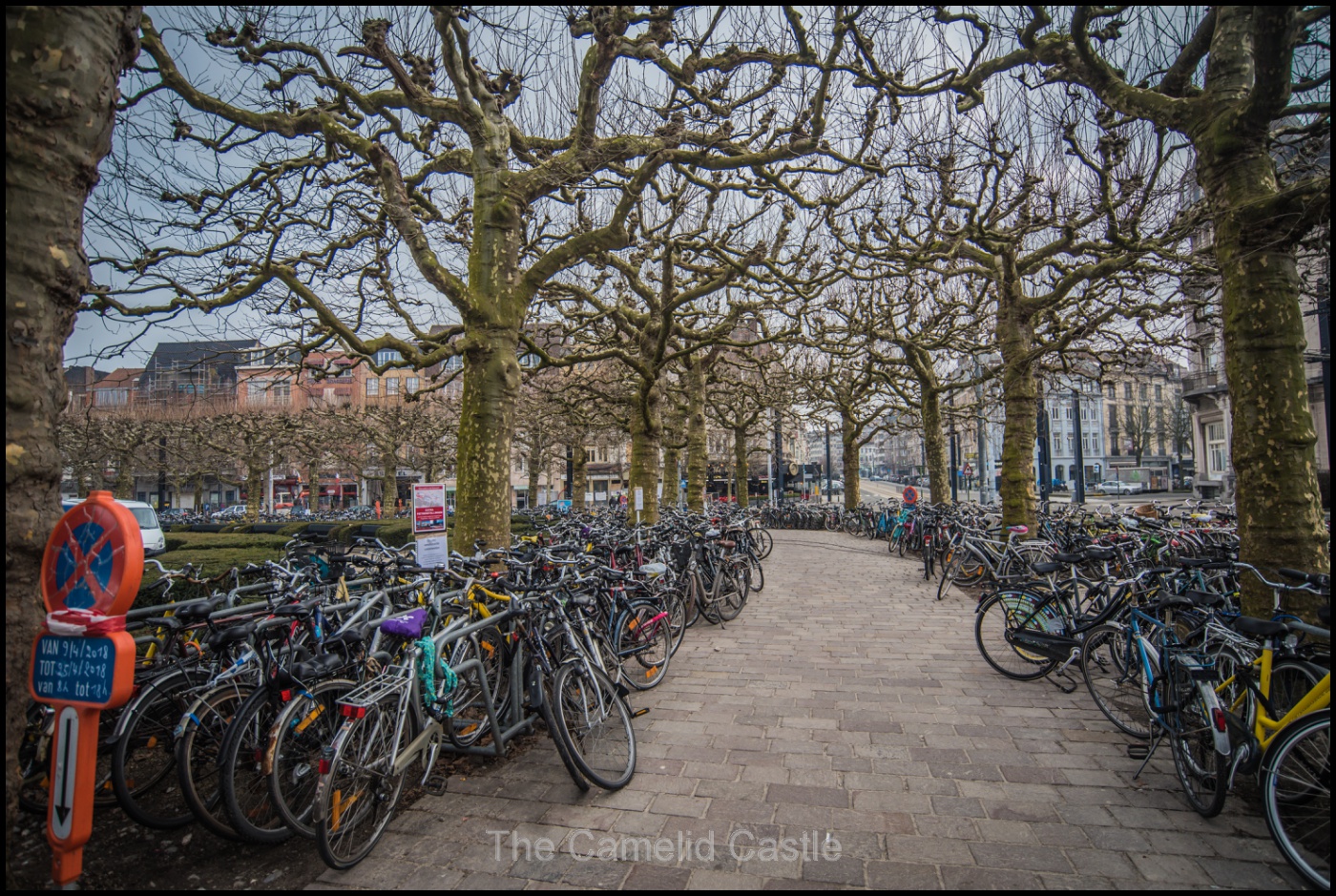 Once in the old town, it looked very familiar from our 2012 visit, we even spotted the hotel we’d previously stayed in! Luckily this time there was less snow and sleet.  We started out with a little walk past a few of the churches and already smelt the delicious chocolate and waffle smells we remembered well from Ghent. 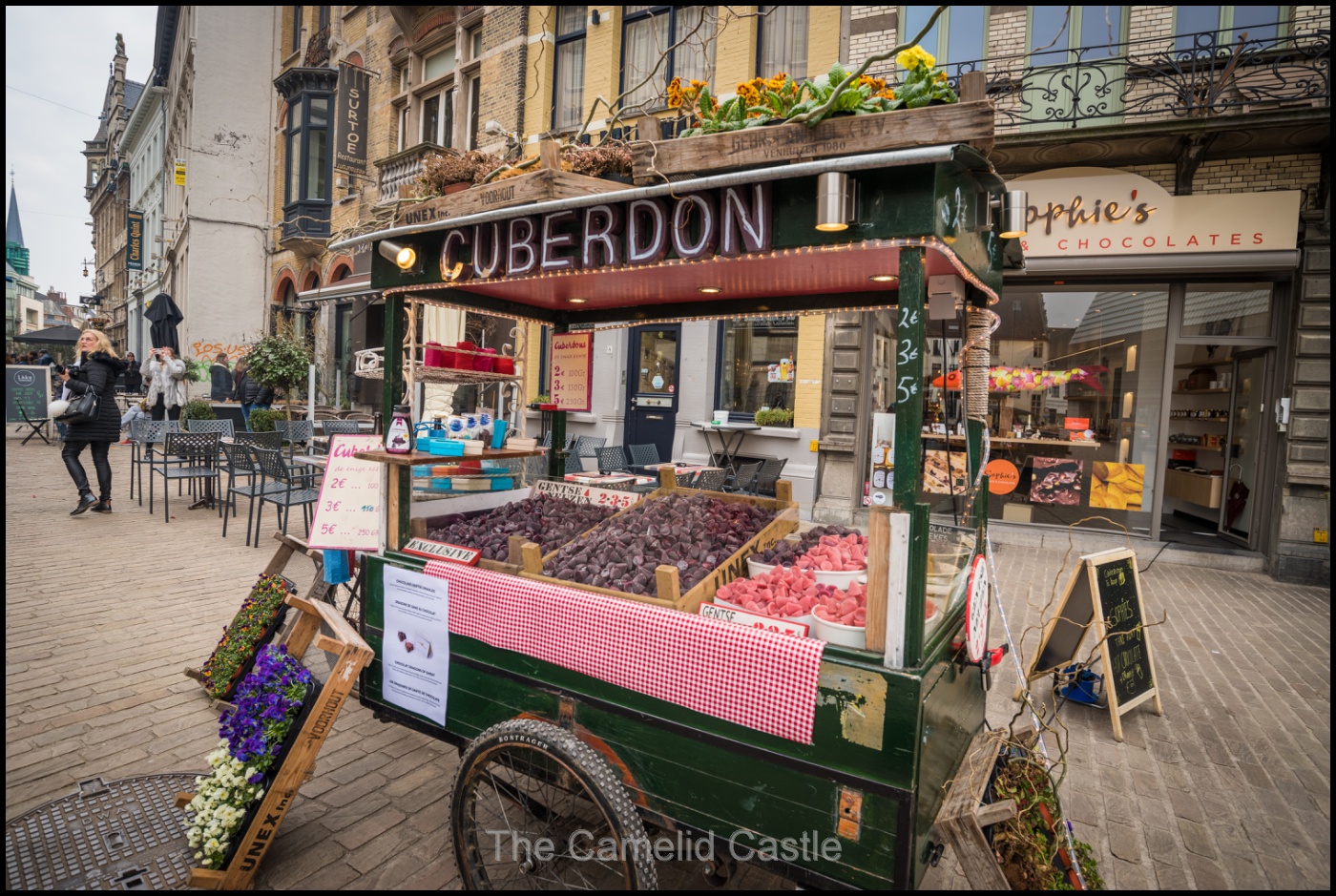 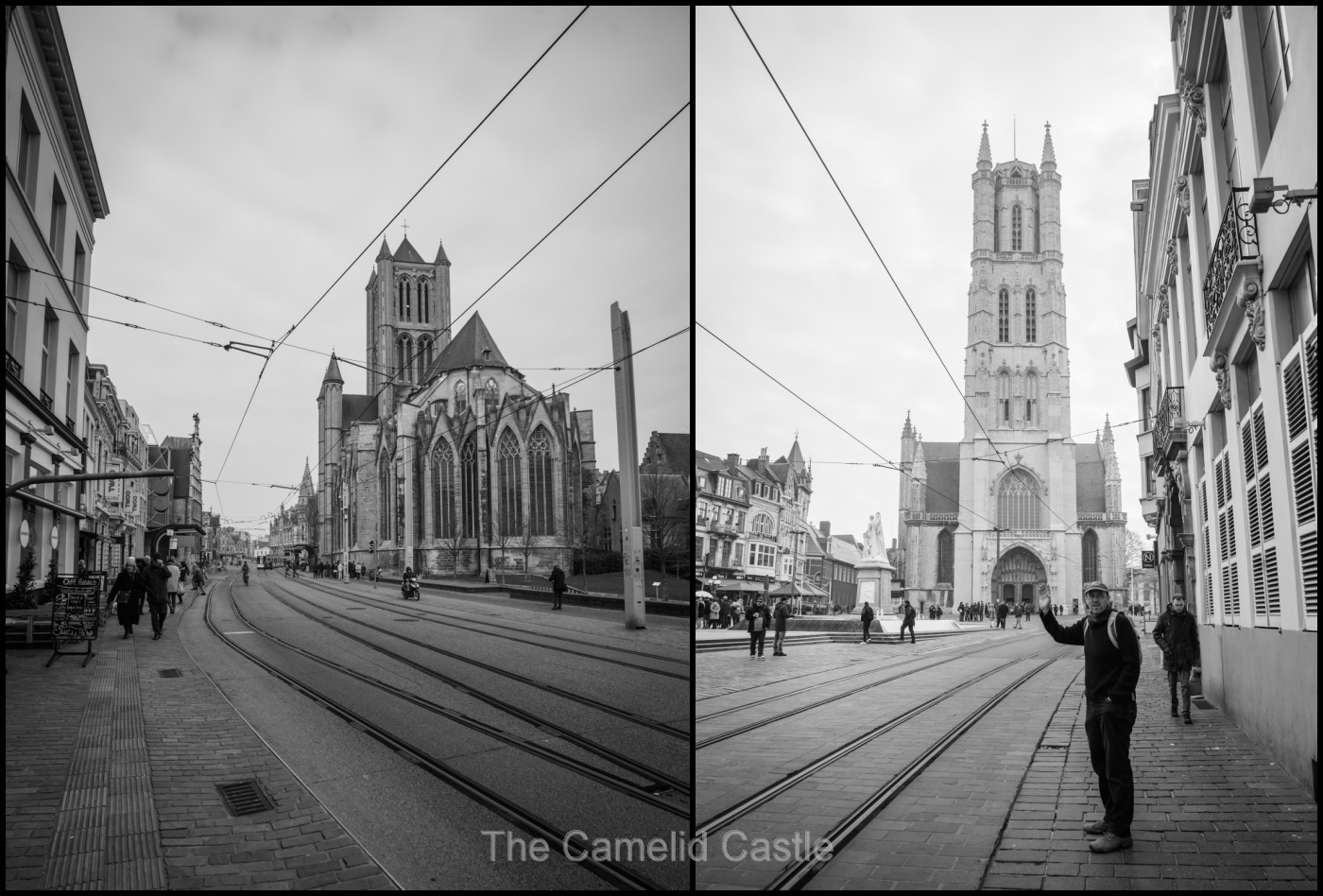 Our first stop was a coffee for the adults and some hot chocolate for the kids. Thick Belgian hot chocolate is the best and this was the first of the trip!  We drank them wandering around, already feeling a little warmer. 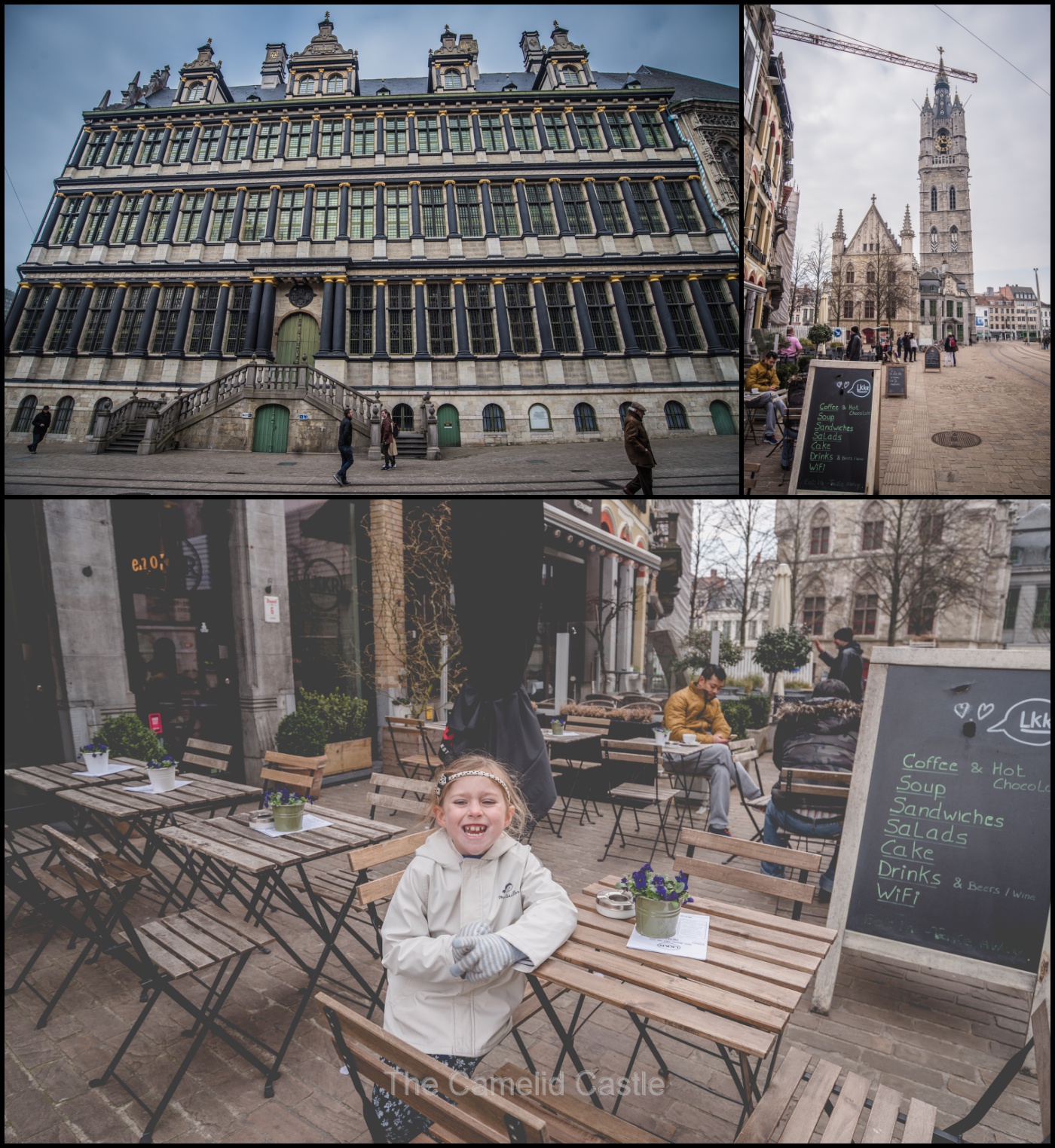 Next we headed up to Gravensteen castle.  We hadn’t managed to visit on our 2012 trip so everyone was keen to have a look.  The castle had plenty of steps to keep our legs moving.  The kids disturbingly liked the torture sections a little bit too much! The mini thrones were also a hit.

There were plenty of winding stone stairs but the views from the top of the castle were pretty good. 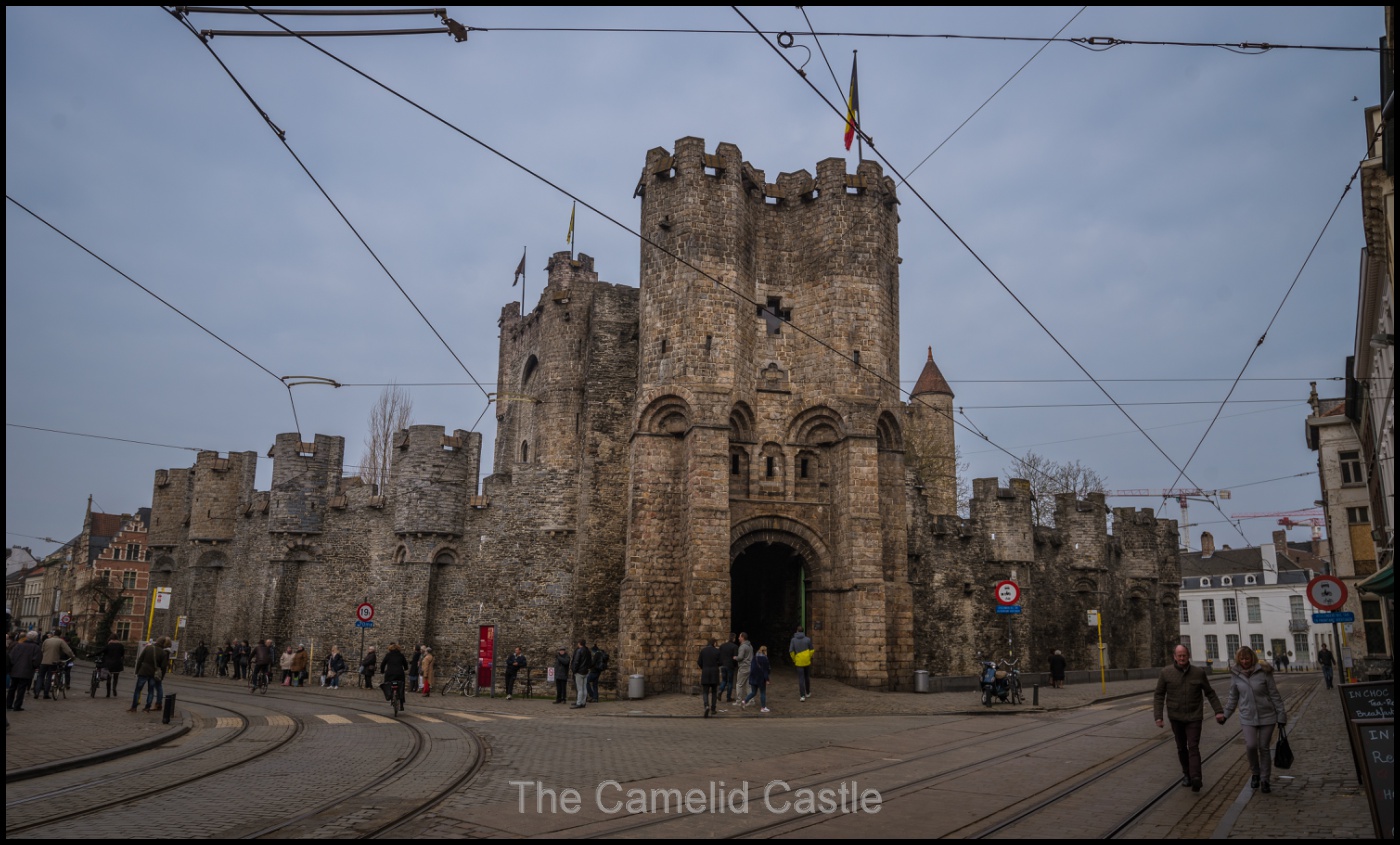 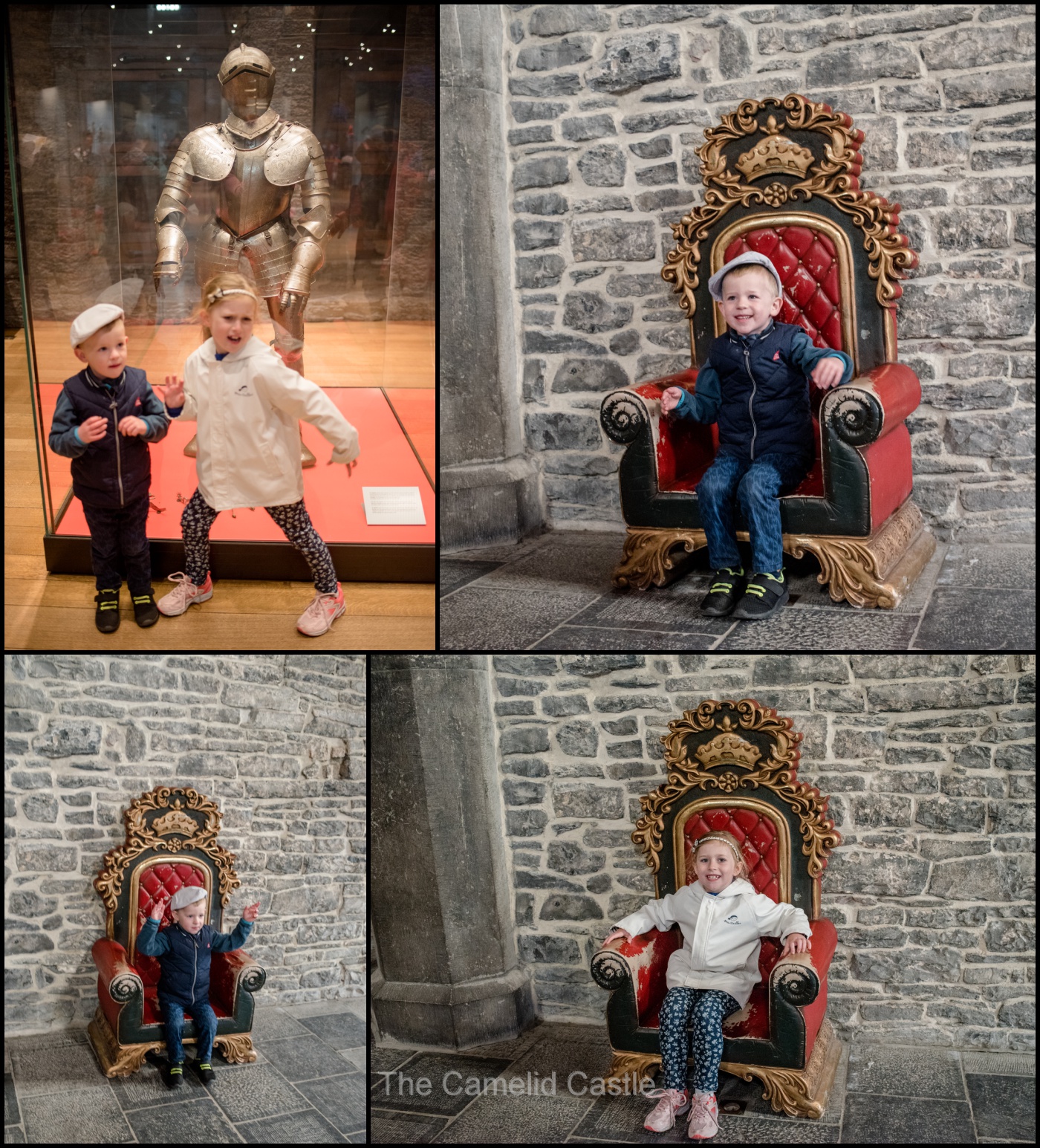 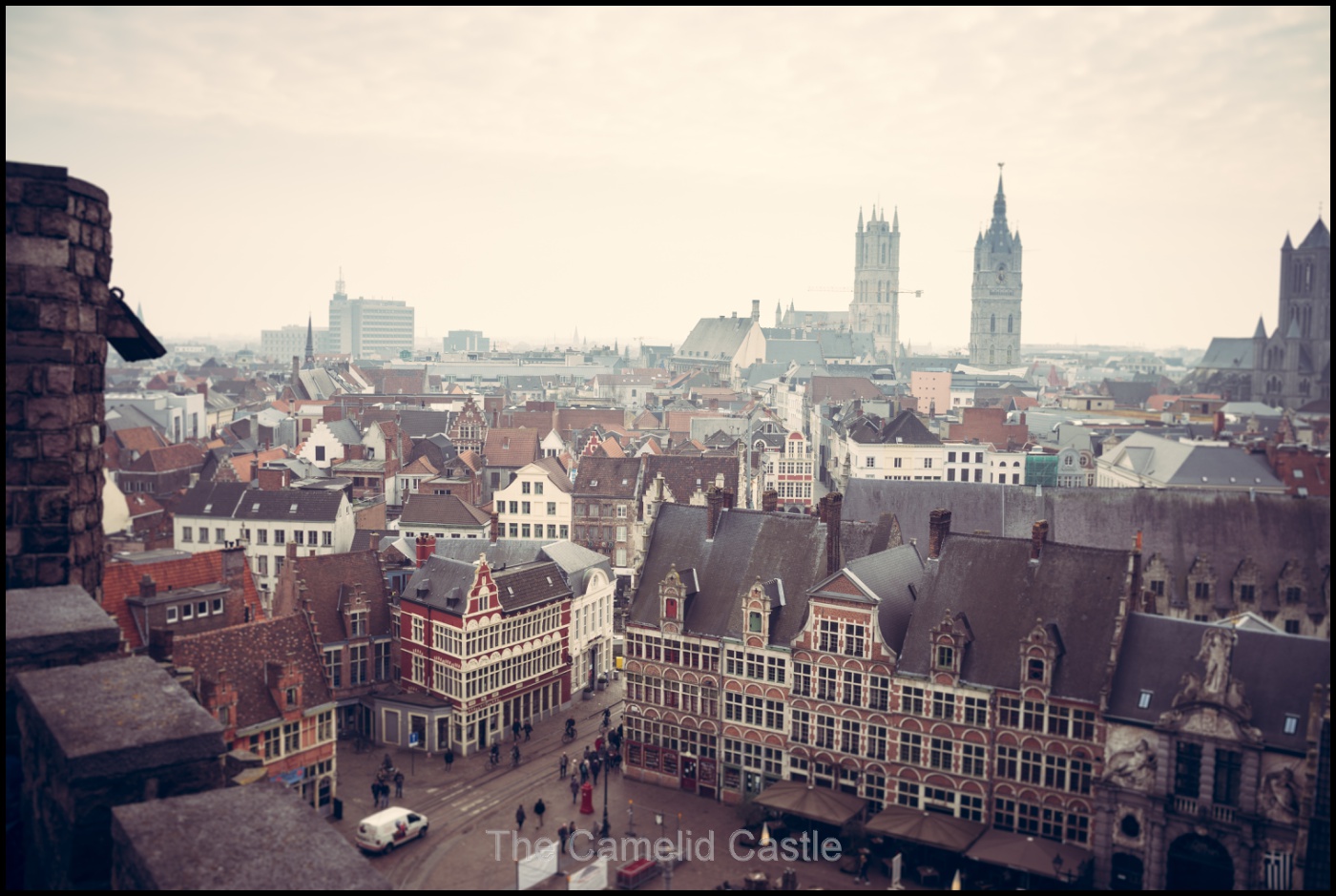 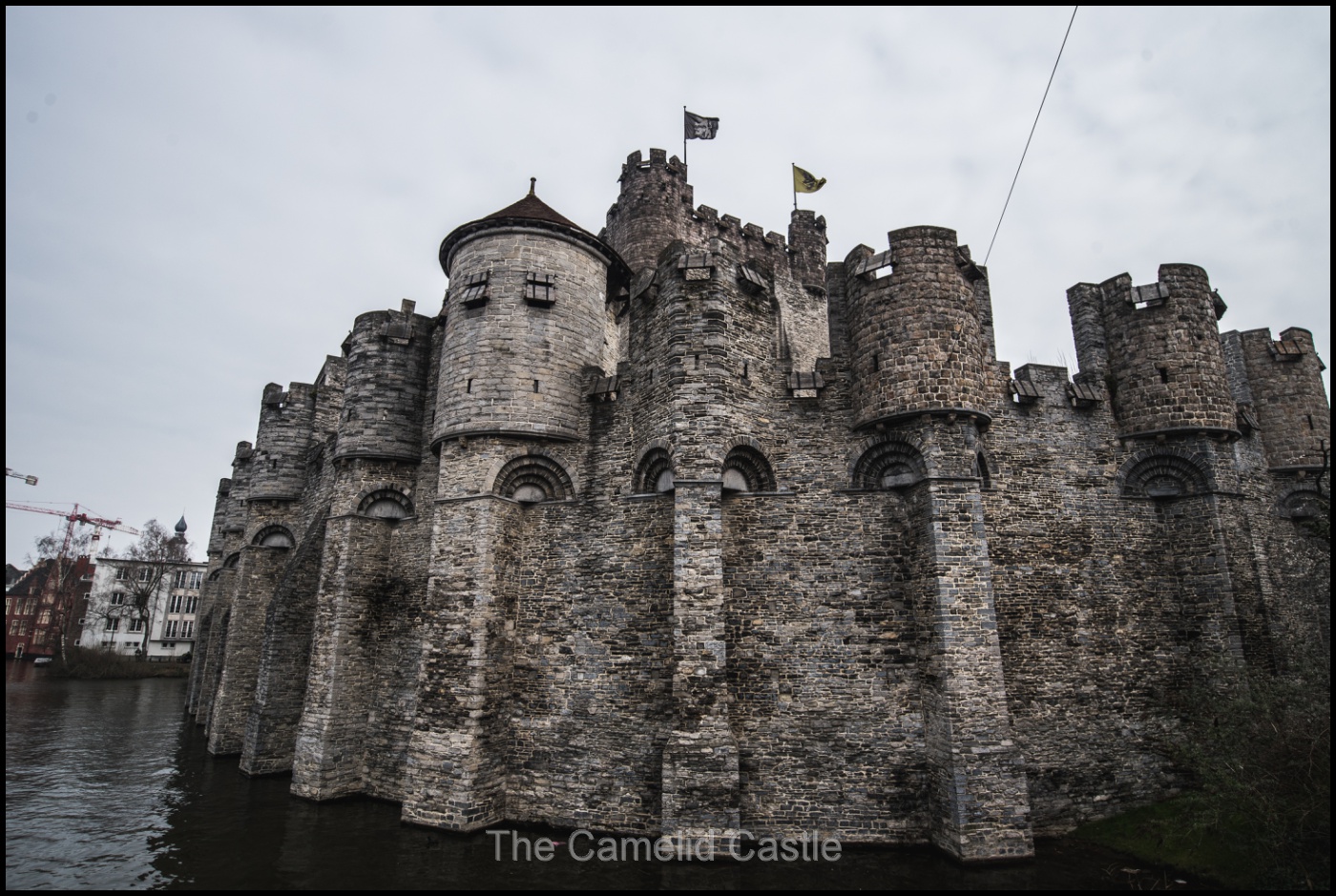 To keep us on our toes there were plenty of nice high drops the kids could fall down.  Luckily there were no incidents and we enjoyed our wander around all the sections of the castle before heading back outside into the cold. 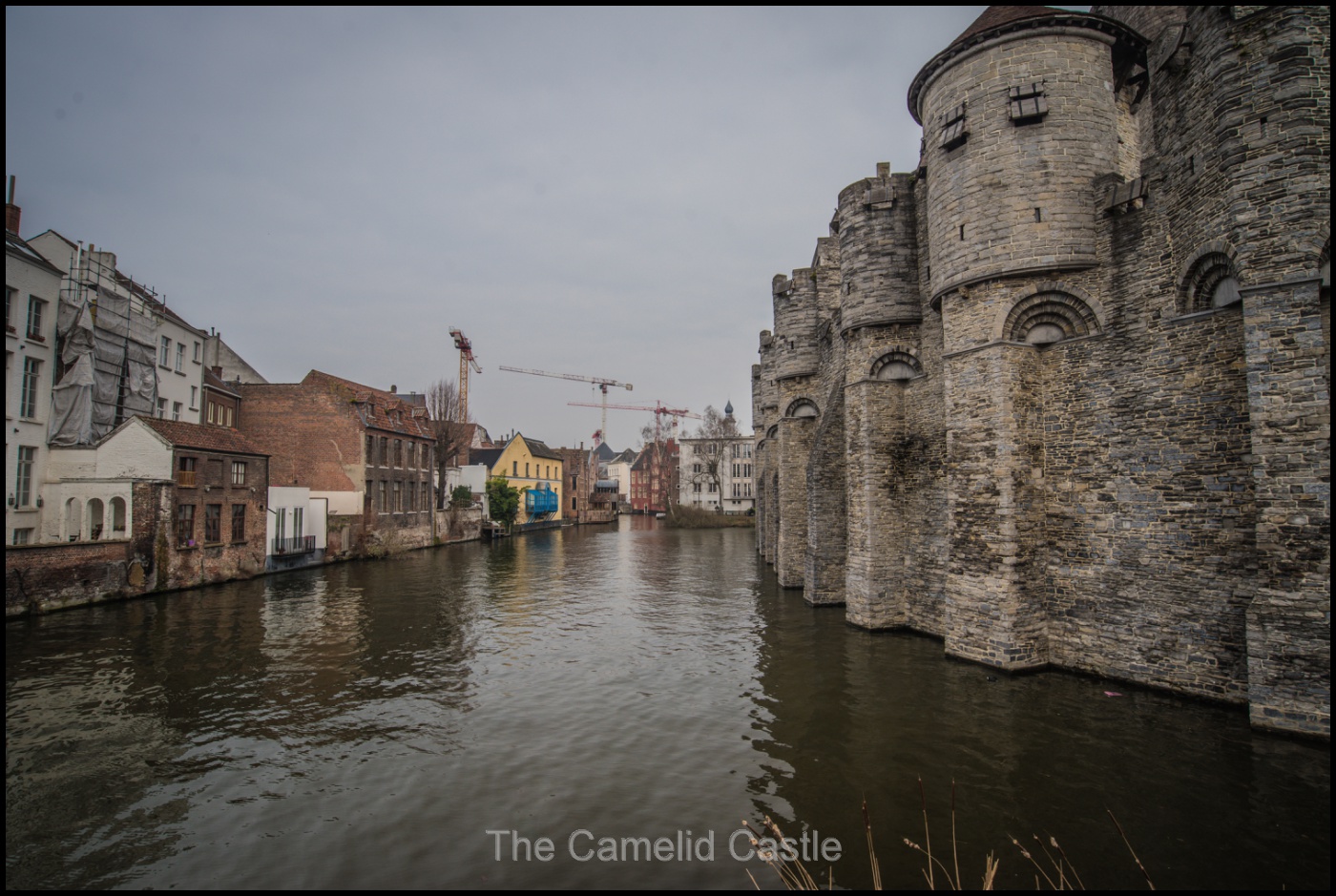 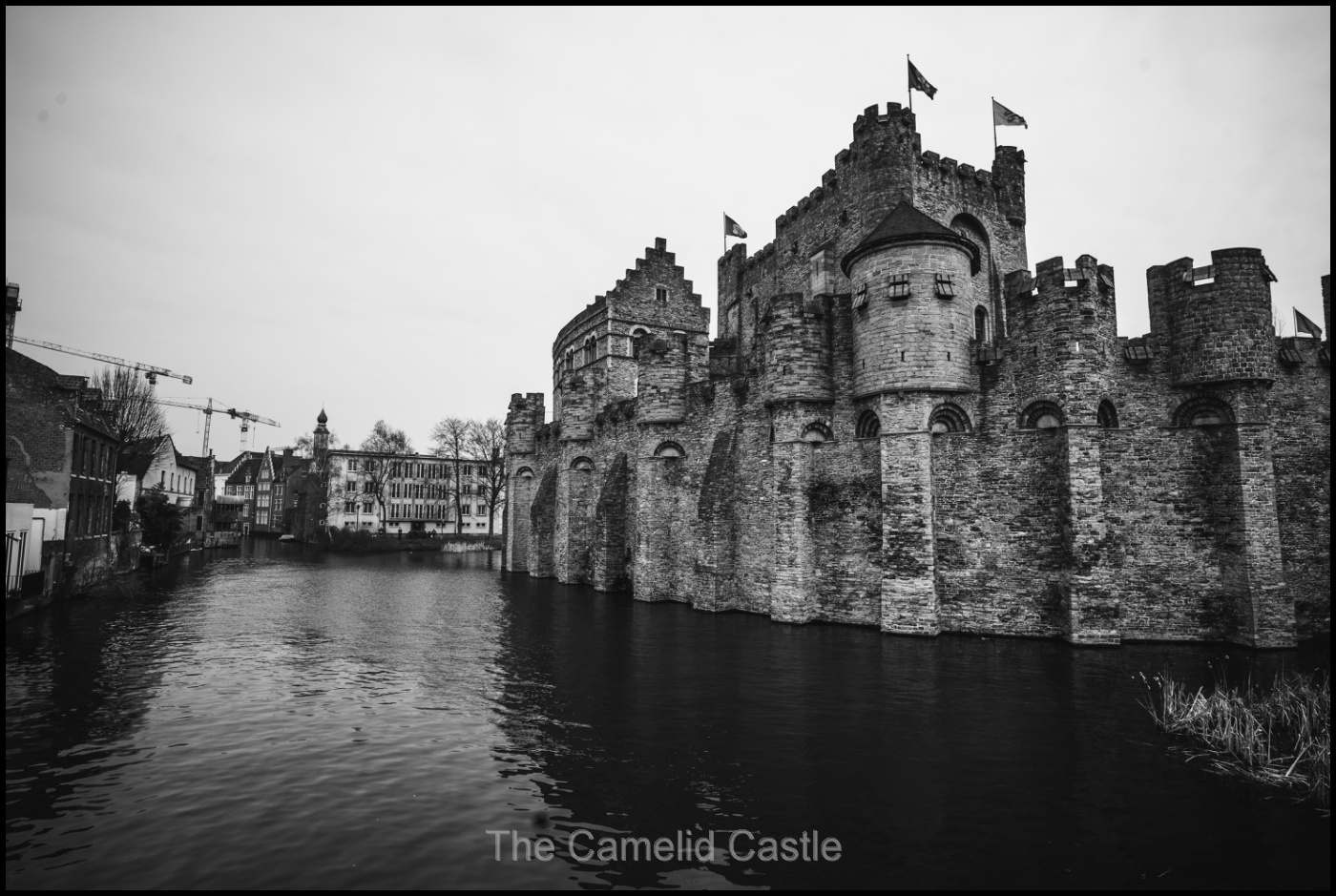 Near the castle there are plenty of beautiful canals so we had a quick wander and despite our enormous breakfast, figured that it was probably time for lunch.  At least for the motor-homers, who hadn’t feasted on such delights.

We walked past a Mediterranean restaurant that smelt pretty good so wandered in for some falafel and dip platters that were all rather tasty, and not small! 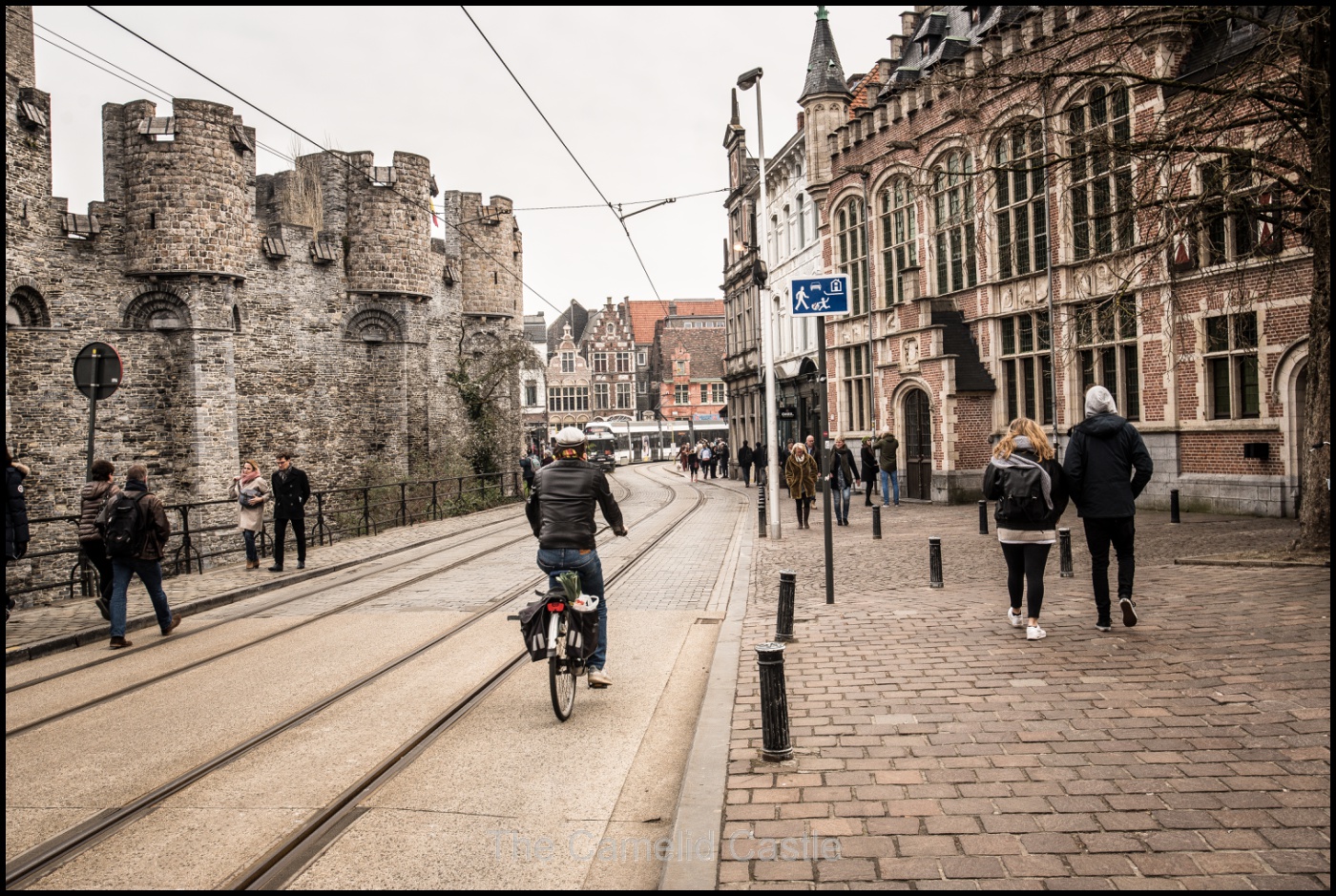 Lunch done, it was unfortunately back out into cold, but there was plenty of sight-seeing to be done still.  We wandered along the very scenic waterfront areas of Graslei and Koronlei. 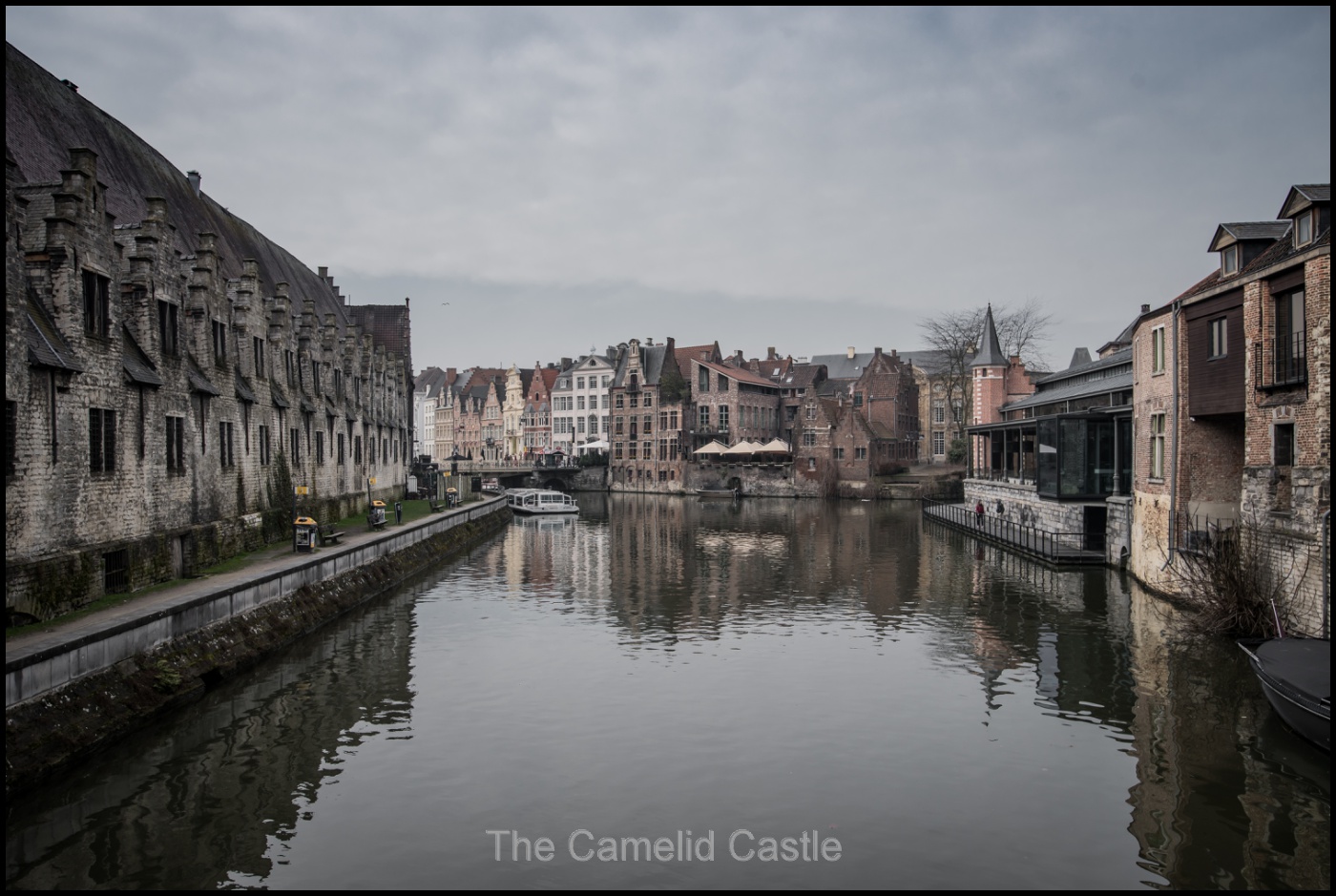 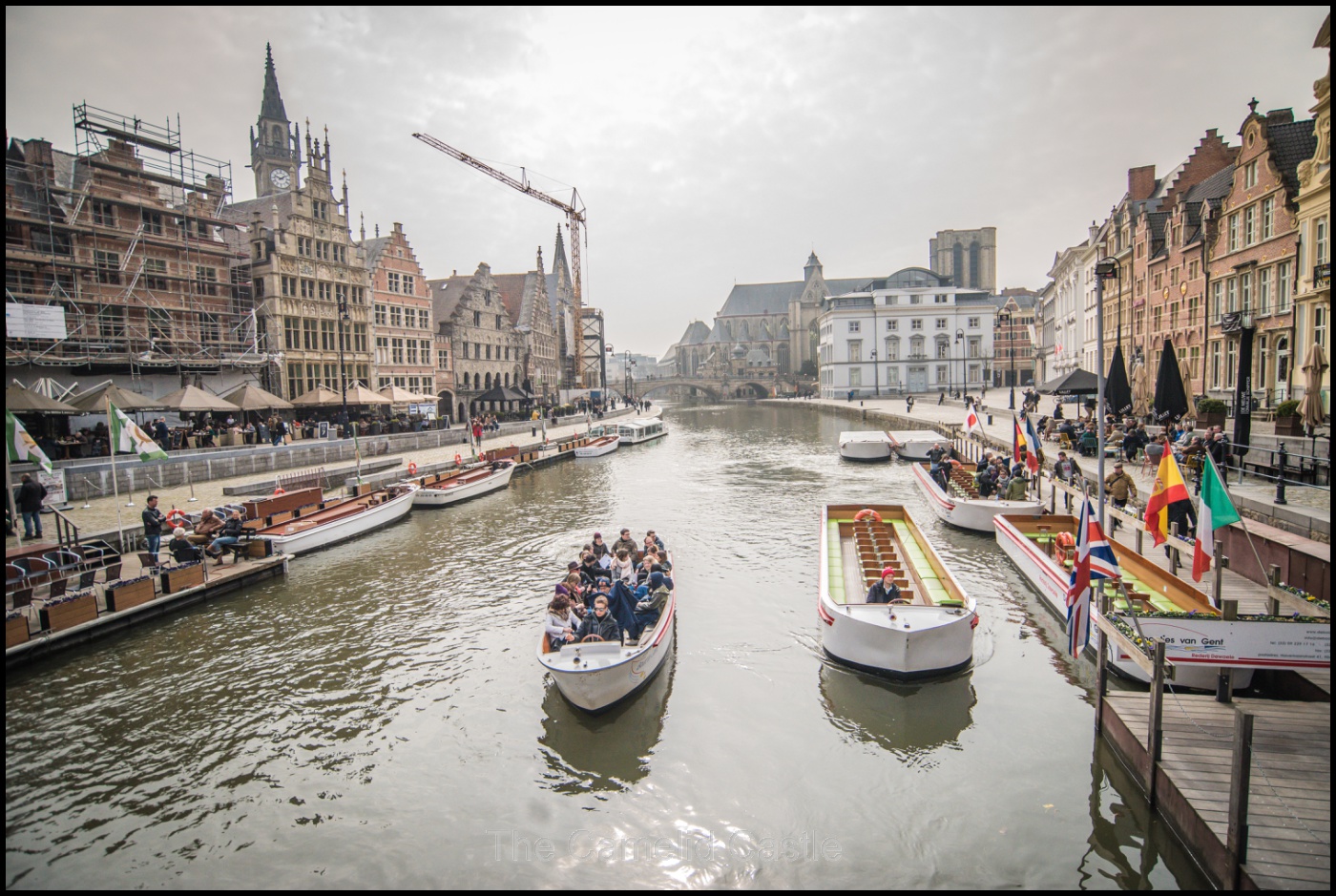 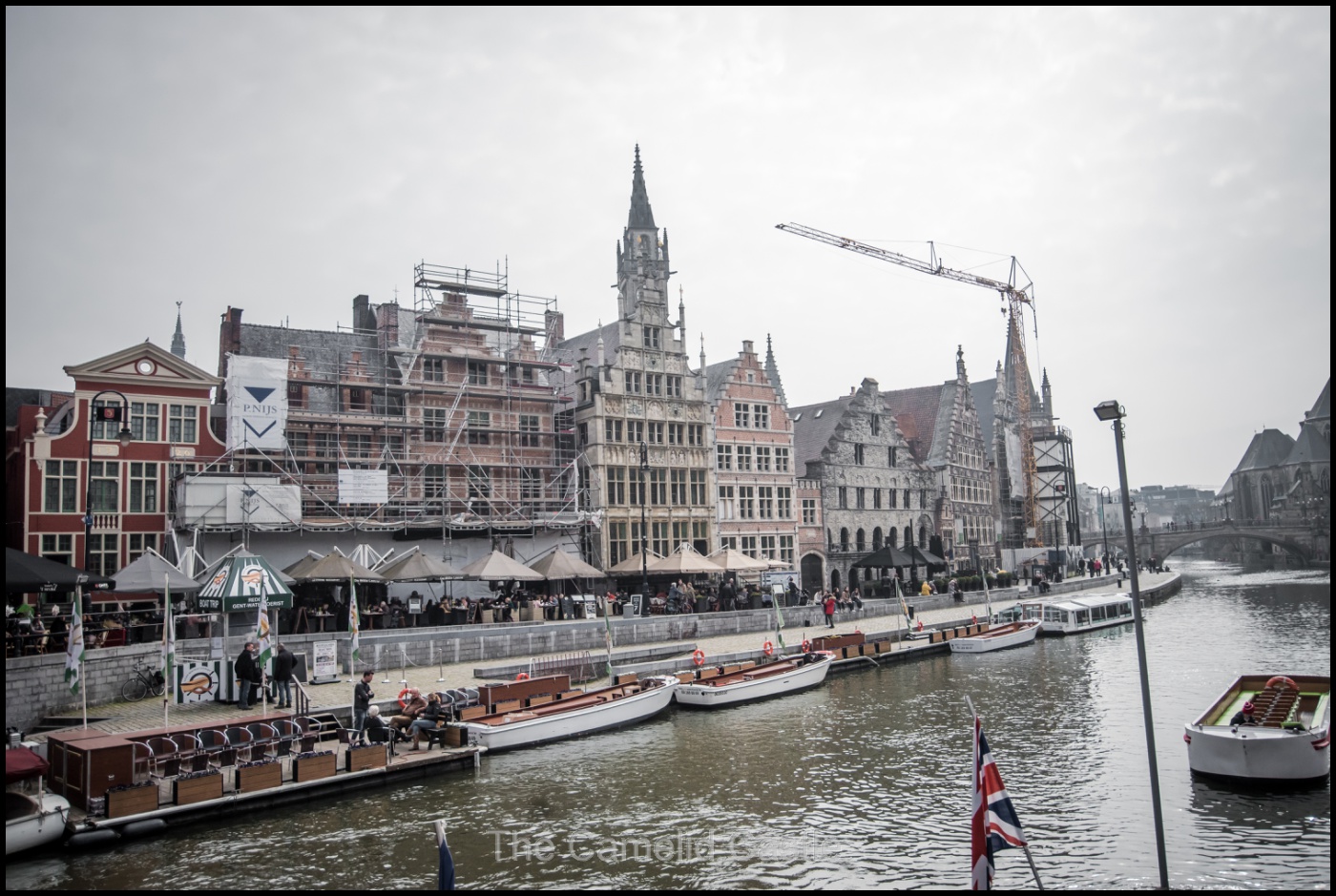 While we had already had a couple of days of selecting and eating Belgian chocolate, Alan and Kim had only arrived in Belgium the previous night.  This meant a visit to some chocolate shops and some tasting (and purchasing) was in order!

Our bags now a little heavier with chocolate, it was off to St Bravo church.  This church is much bigger than it looks on the outside and extremely beautiful.  It also (somewhat bizarrely) has a whale skeleton, not something you see every day in a church.  To add to the atmosphere there was a woman beautifully singing hymns, which was quite amazing. 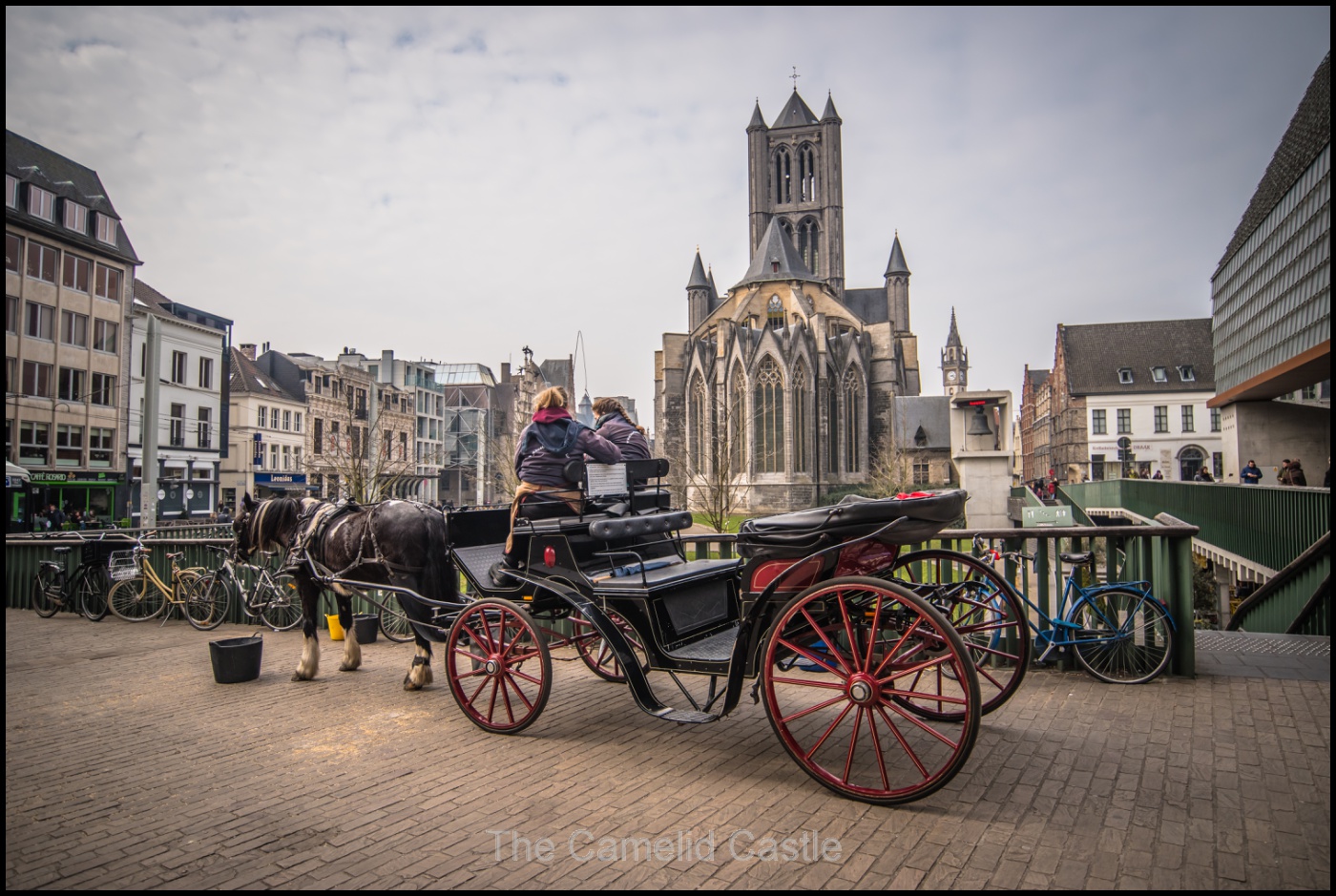 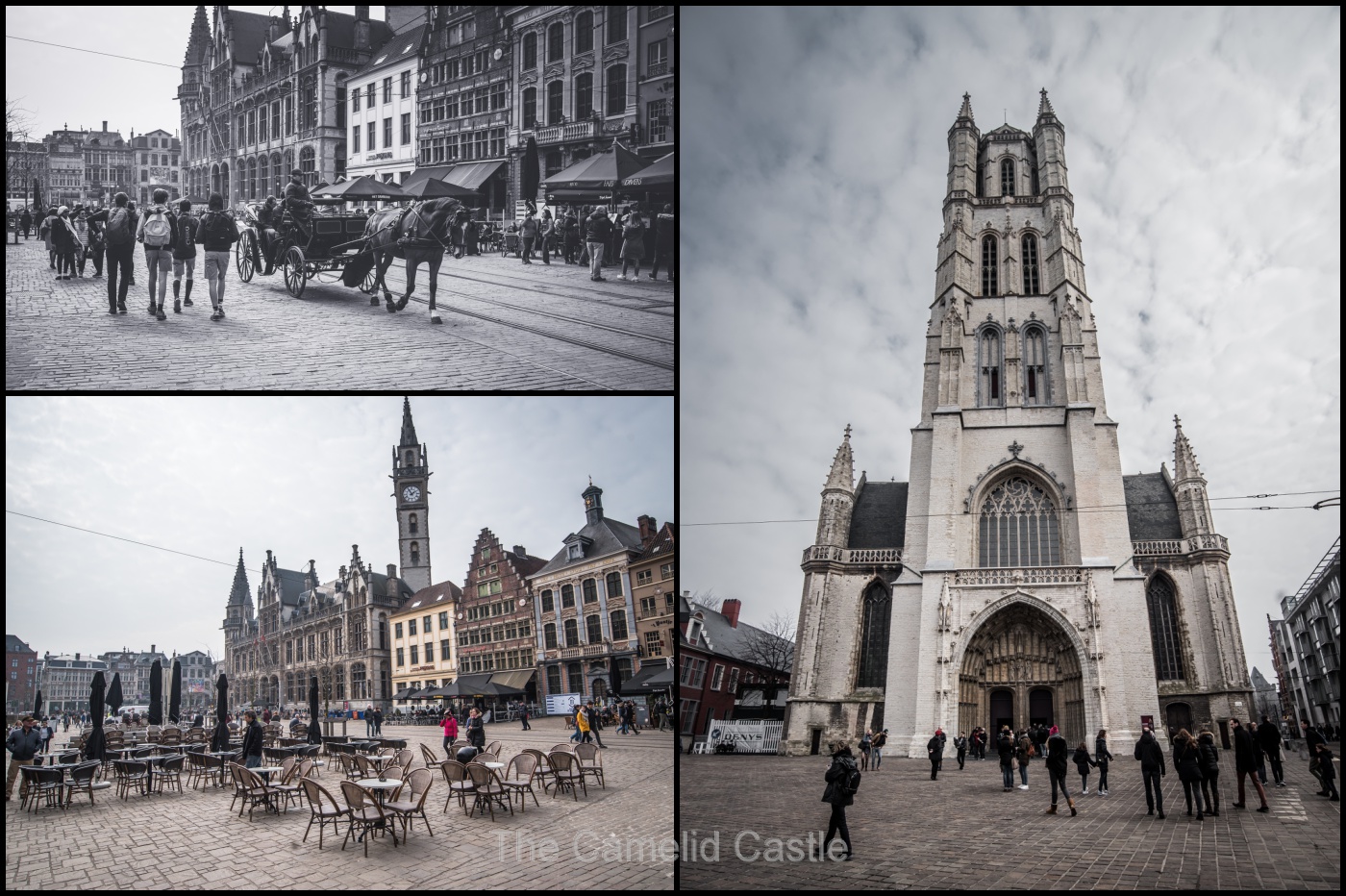 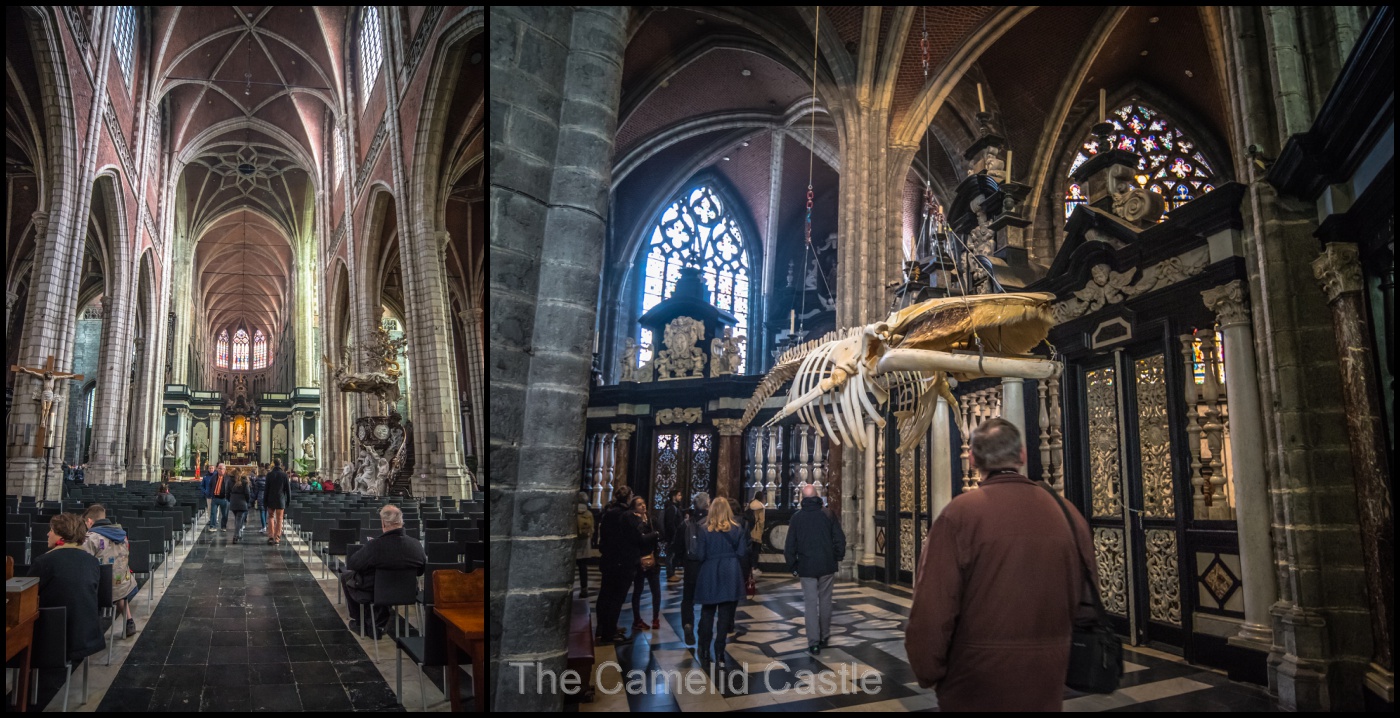 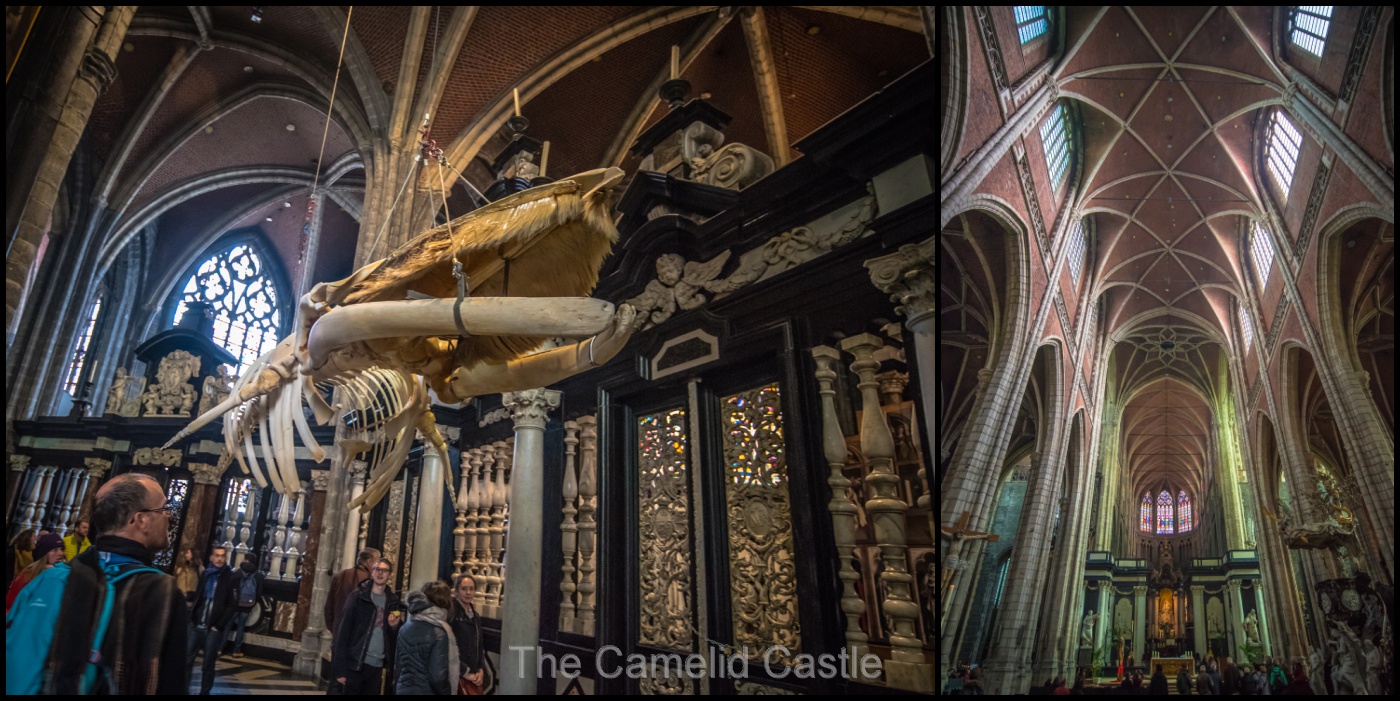 The church was also freezing, so it was actually warmer outside!  unfortunately it was still chilly outside but we had a walk down around the port area (which was hadn’t gotten to on our previous trip).  There were an impressive array of boats, which kept Master Soren amused and a number of colourful houses. 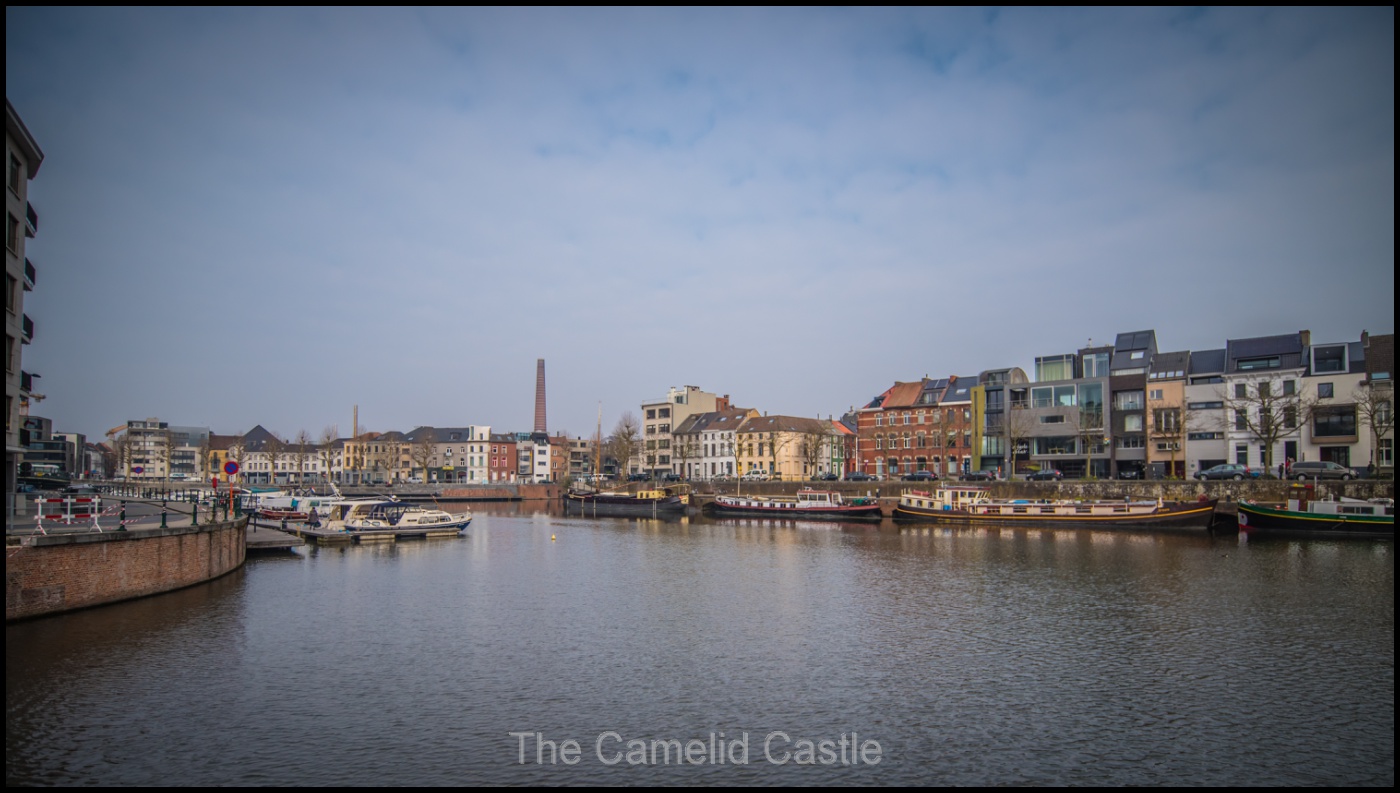 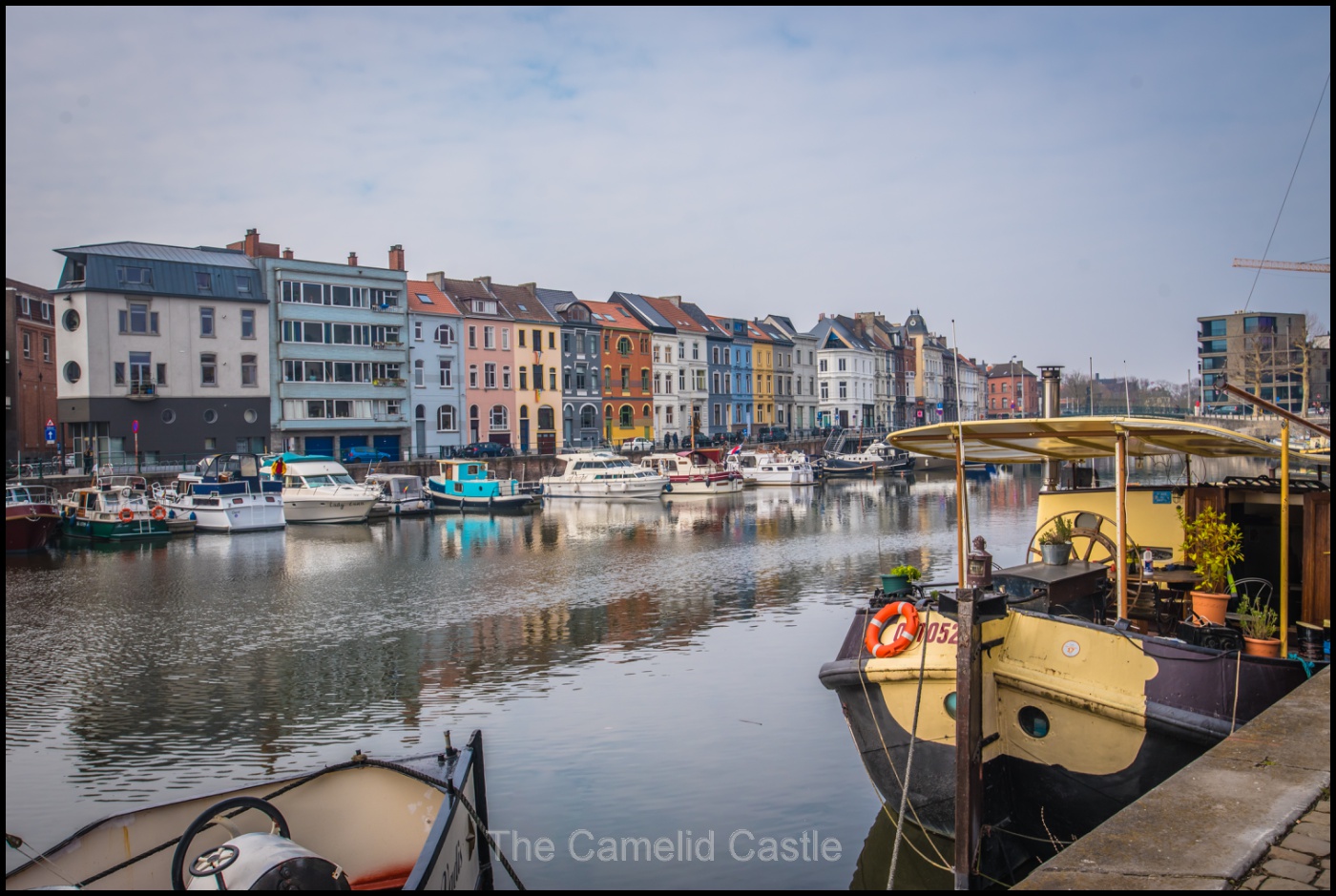 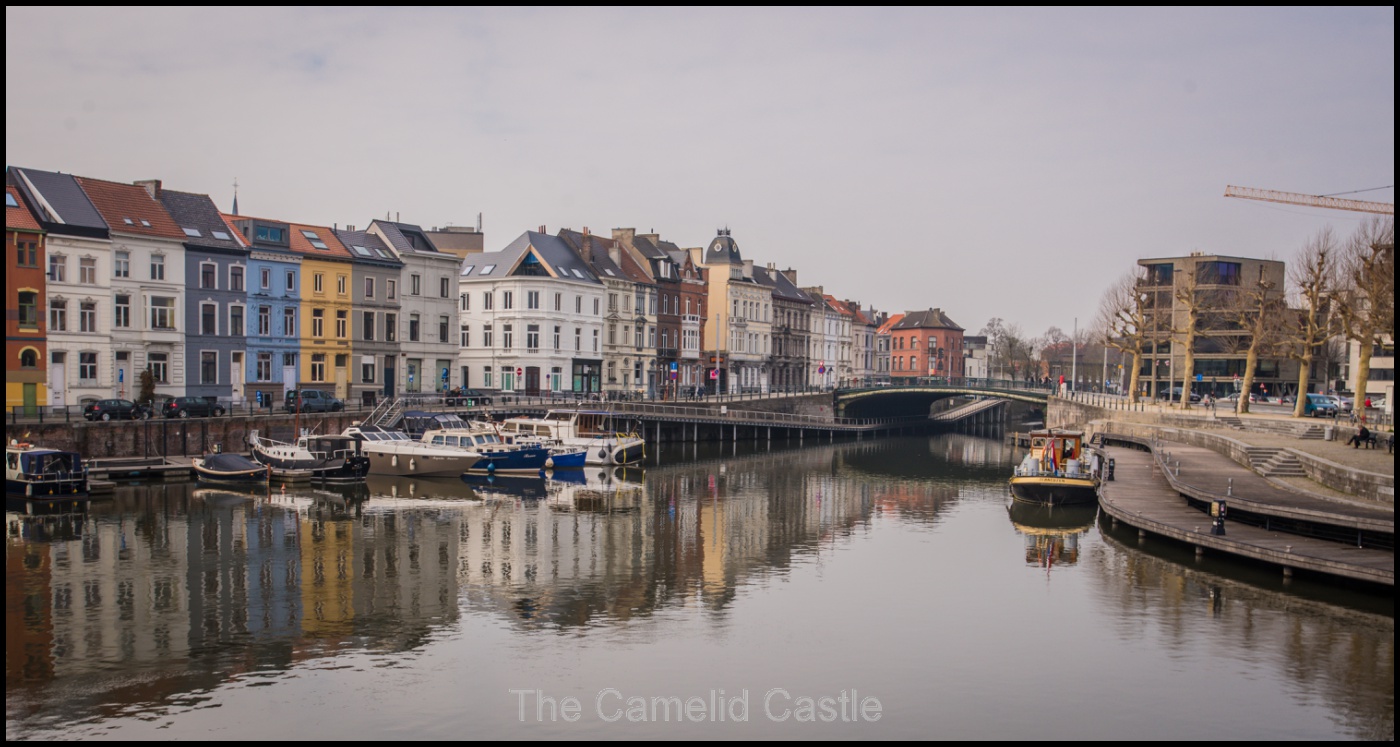 By now both kids needed a toilet break and we decided it was probably time for coffee so went in search of a cafe.  Alan and Kim figured they probably needed to try some Belgian waffles.  The street vendors are usually our preferred option but we were happy to sit down, warm up and use the facilities. We happened to find a place that was also cooking waffles out the front, it turns out they were excellent waffles, probably our best to date. 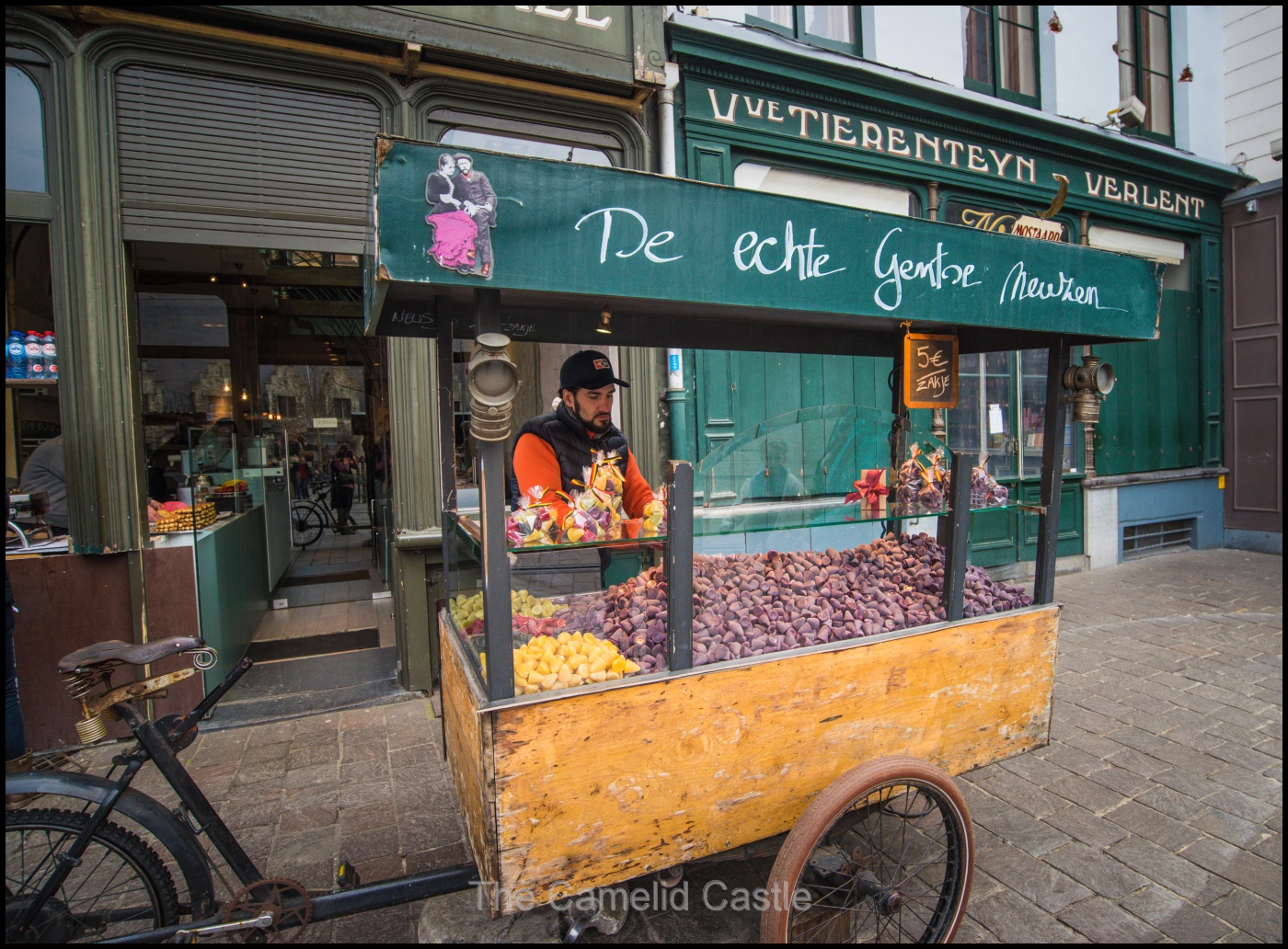 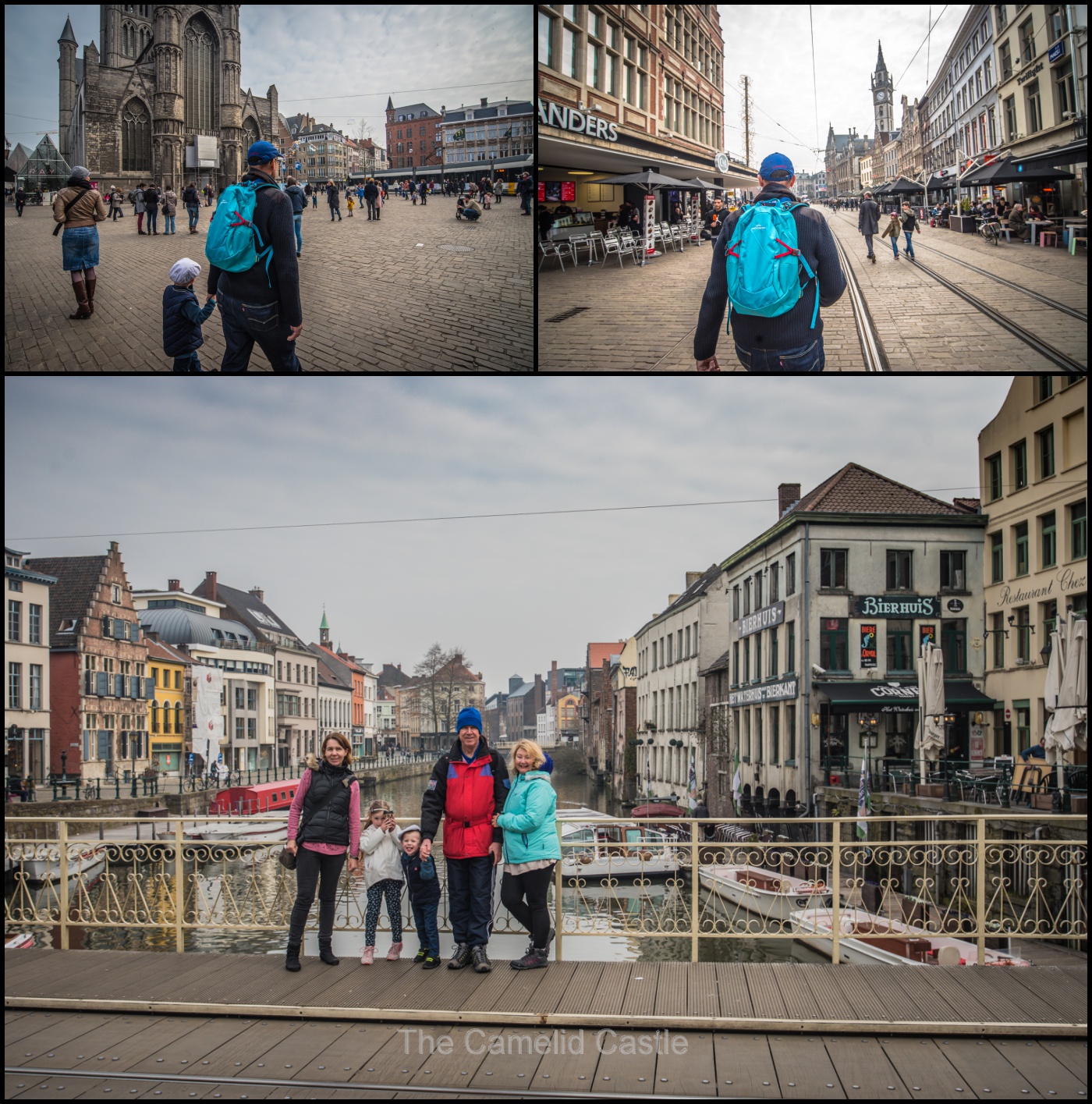 Our tummies full of waffles it was now late in the afternoon so we had a wander back to the tram and the short ride back to the station.  We had to bid farewell to Alan and Kim and they rode back to their campsite to continue their European adventure, while we headed back to our wonderful B&B in Bruges.

Again the train was quite empty, so we got seats.  On the return journey to Bruges, we noted how similar the countryside is to the areas of the Netherlands that we’d ridden through the previous year.  The houses are even very similar in style. This part of Belgium (in the North) is quite close to the Netherlands, so you can definitely see the Dutch influence.

Off the train in Bruges, we had a quick stop at the supermarket for dinner supplies. It was now very cold and we were all rather tired.  We decided to walk back to our B&B past a couple of other spots we hadn’t yet seen in Bruges.  Our first stop was Minnewater, the lake of love, which was indeed very picturesque.  The lake is also populated by plenty of white swans. 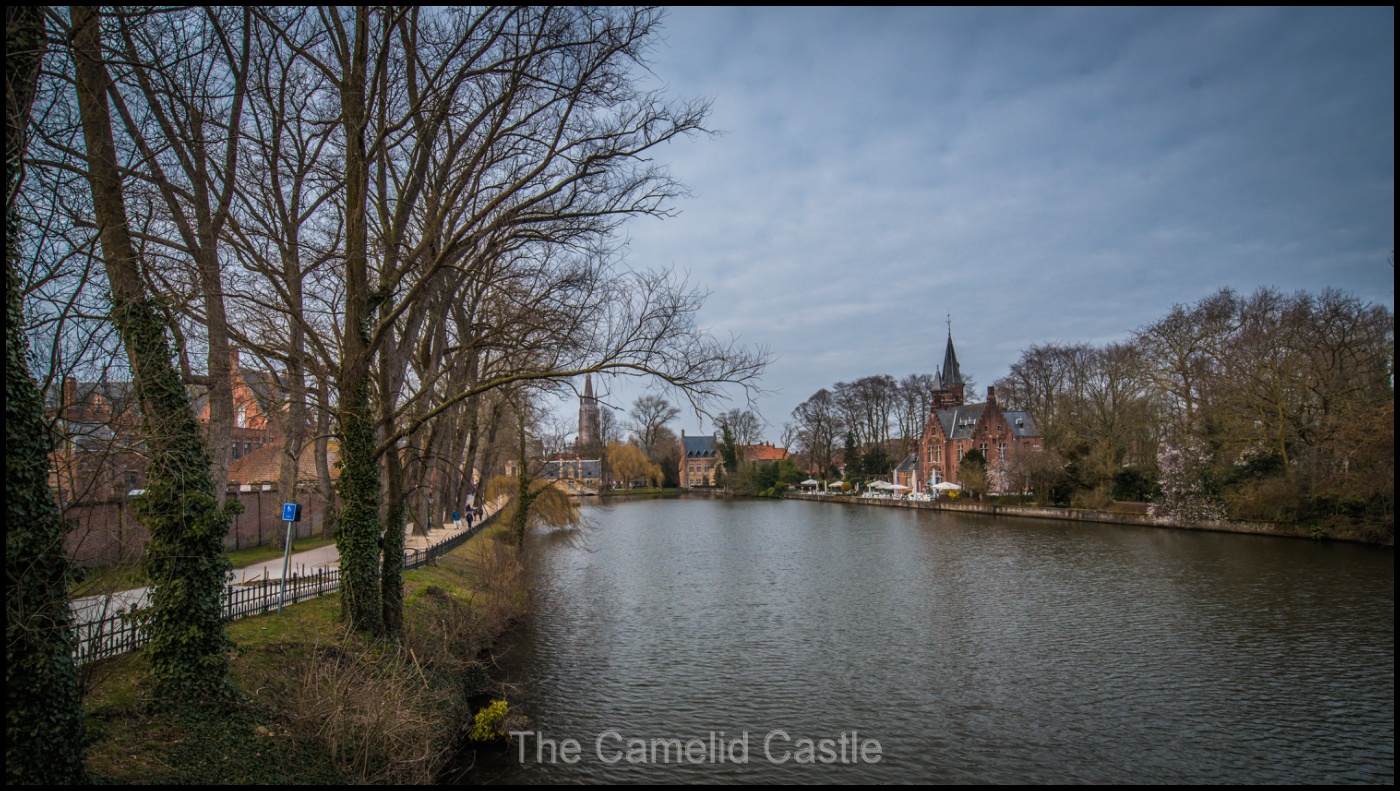 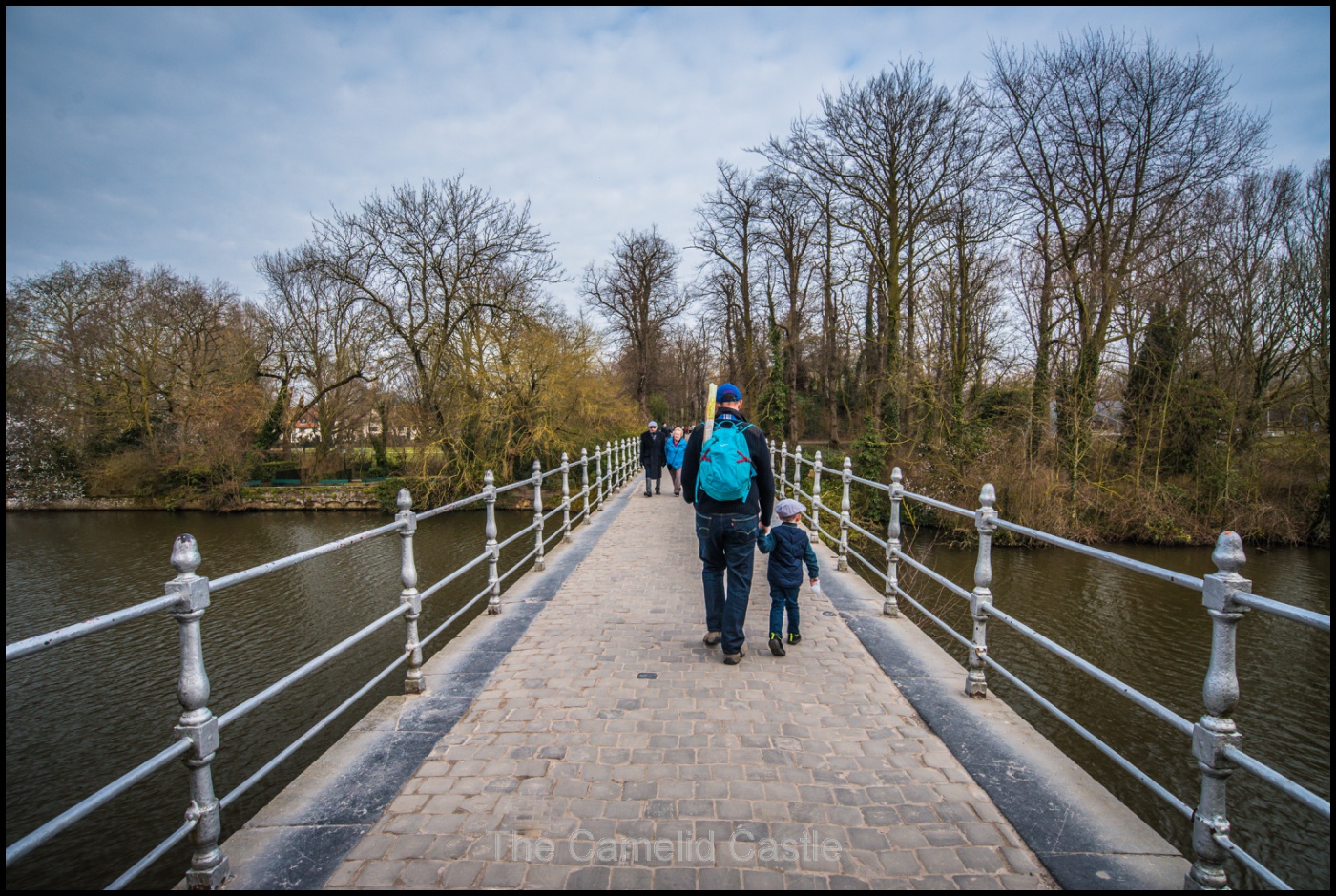 Our last stop for the day was the Béguinage monastery, an enclosed lawn, dotted with tall trees, and surrounded by white gothic houses. It was built to house Beguines, lay religious women who could live in the community without taking vows, but had been used as a convent for Benedictines since 1927. There were signs up around the complex asking for silence (always challenging for small children)! 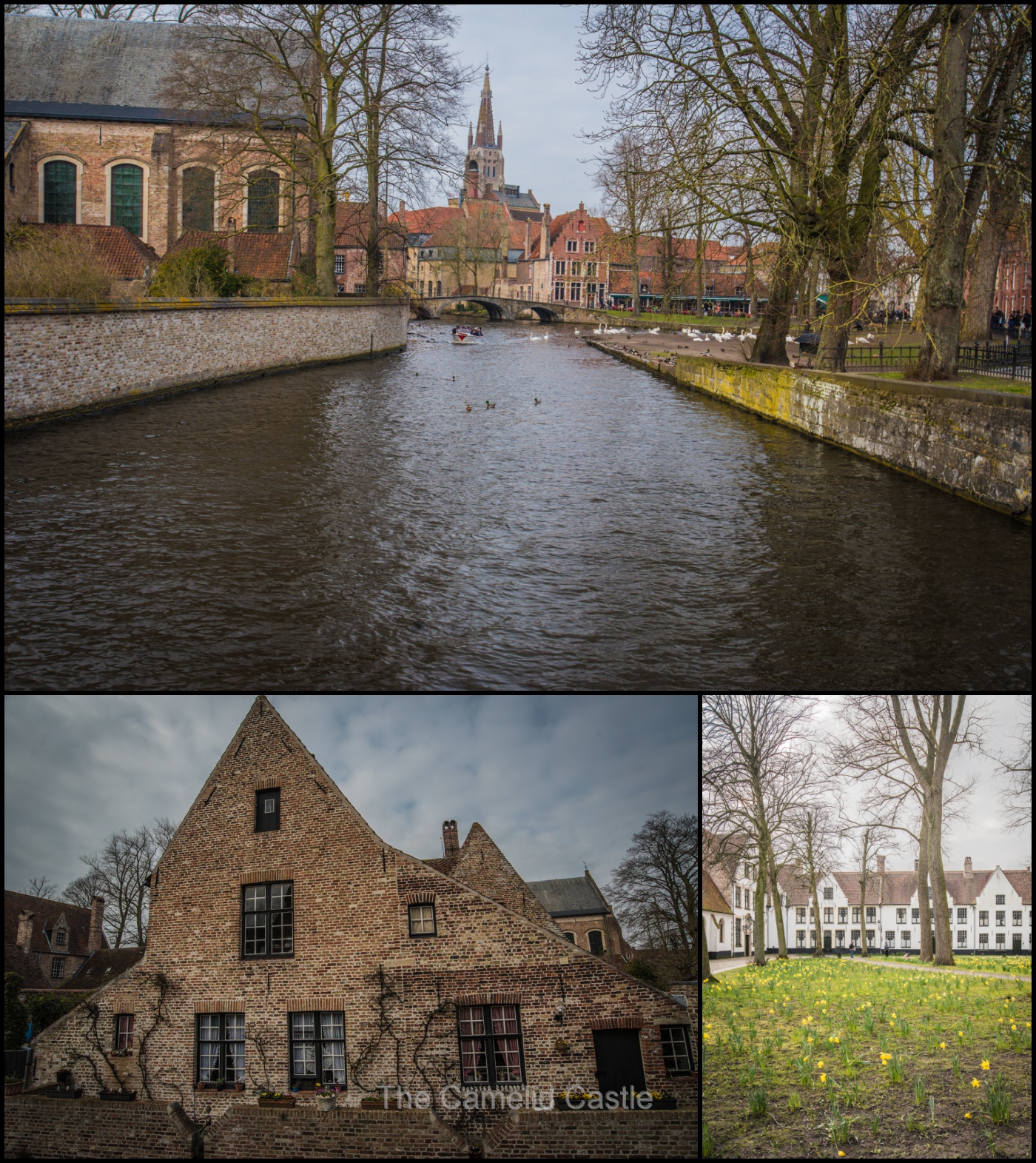 Our track back to our B&B was through a maze of different streets where we spied different restaurants and shops.

After a long day of sight-seeing and a few late nights we’d all voted for a ‘hotel picnic’ for dinner tonight.  We’d picked up some supermarket supplies and with our picnic gear whipped up a dinner of cheese, bread, egg salad and pâté .  The kids finished off their dinner with one of the Belgian chocolates they had selected earlier in the day.

We were all rather exhausted after another cold day with lots of walking.  We had 1 day left in Belgium (and plenty of food still to eat) so a good nights sleep was in order.

Daily statistics for Sunday 25 March, 2018 in Bruges and Ghent, Belgium – the temperature range for the day was 4 to 9 degrees , with a mean of 6 degrees in both cities. The windchill meant that the apparent temperature was around 2-3 degrees all day. Not as nice as the previous day!  The total walking for the day was a reasonable 12.5km.

Up next, our final day in Belgium, another beautiful day in Brugges, a horse and carriage ride, more waffles and the trip to Paris…….