26 March 2018 – A horse and carriage ride in Brugge and the final waffles before Paris!!! [Belgium, France]

Our last day in Belgium was full of windmills, waffles, and a very fun horse and carriage ride around picturesque Brugge!

It was the fourth day into the holiday and again we were all awake at 4am again (annoyingly) and took forever to go back to sleep.  Luckily we had a relaxed start to the morning after a few busy days, so there was no need to rush around and we repacked for our afternoon departure and went down to breakfast.  Again the breakfast at Saint Sauveur  was awesome with great pastries, pancakes, meats, cheeses and freshly cooked eggs and bacon. The kids were way less hungry this morning but still made a fair effort! 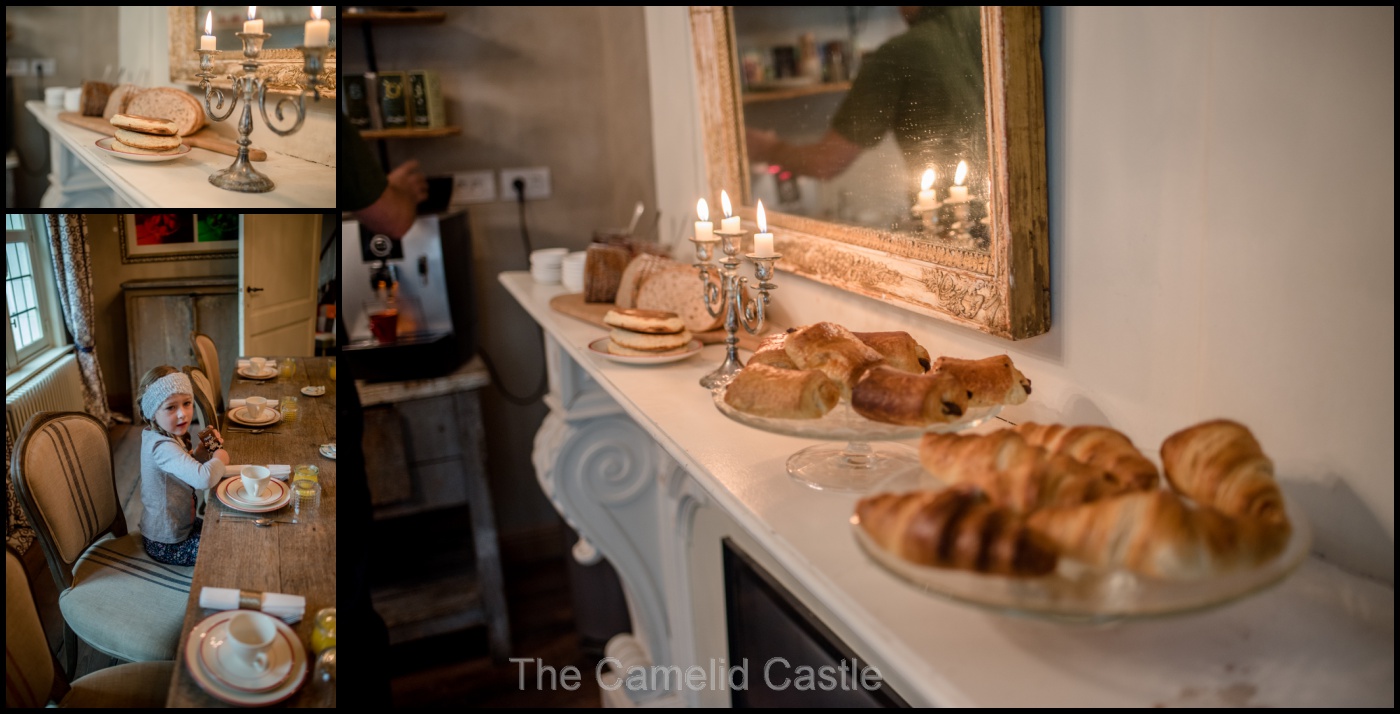 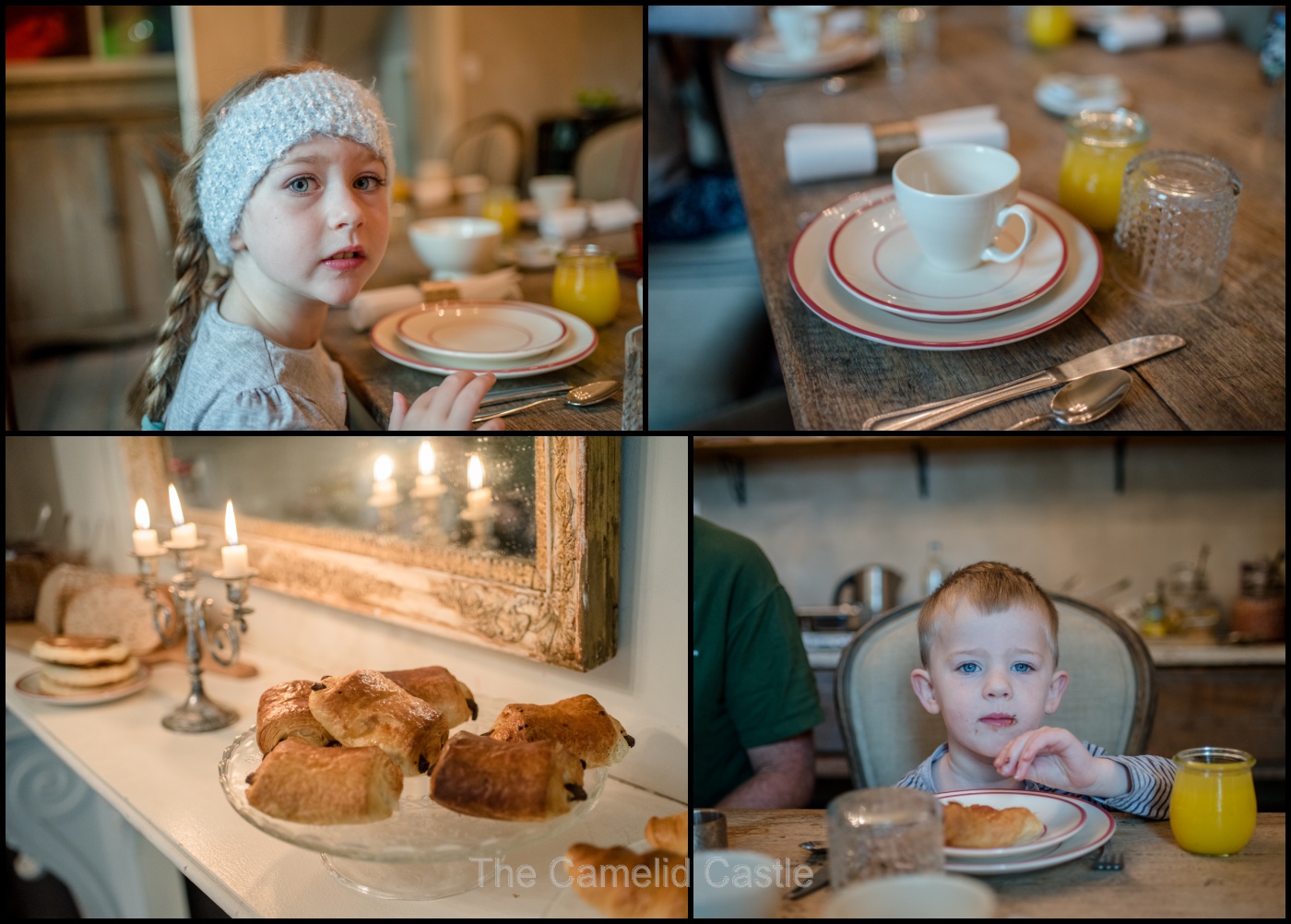 It was apparently only 5 degrees outside so we rugged up based on that forecast, despite it looking beautiful and sunny outside and being toasty warm inside.  We’d had one lovely day in Bruges but a cooler and windier day in Ghent and Bruges the day before so weren’t entirely sure what to expect.

Our plan was to finish off the sight-seeing in Brugge and treat the kids to a horse and carriage ride before catching the high-speed train to Paris in the afternoon. 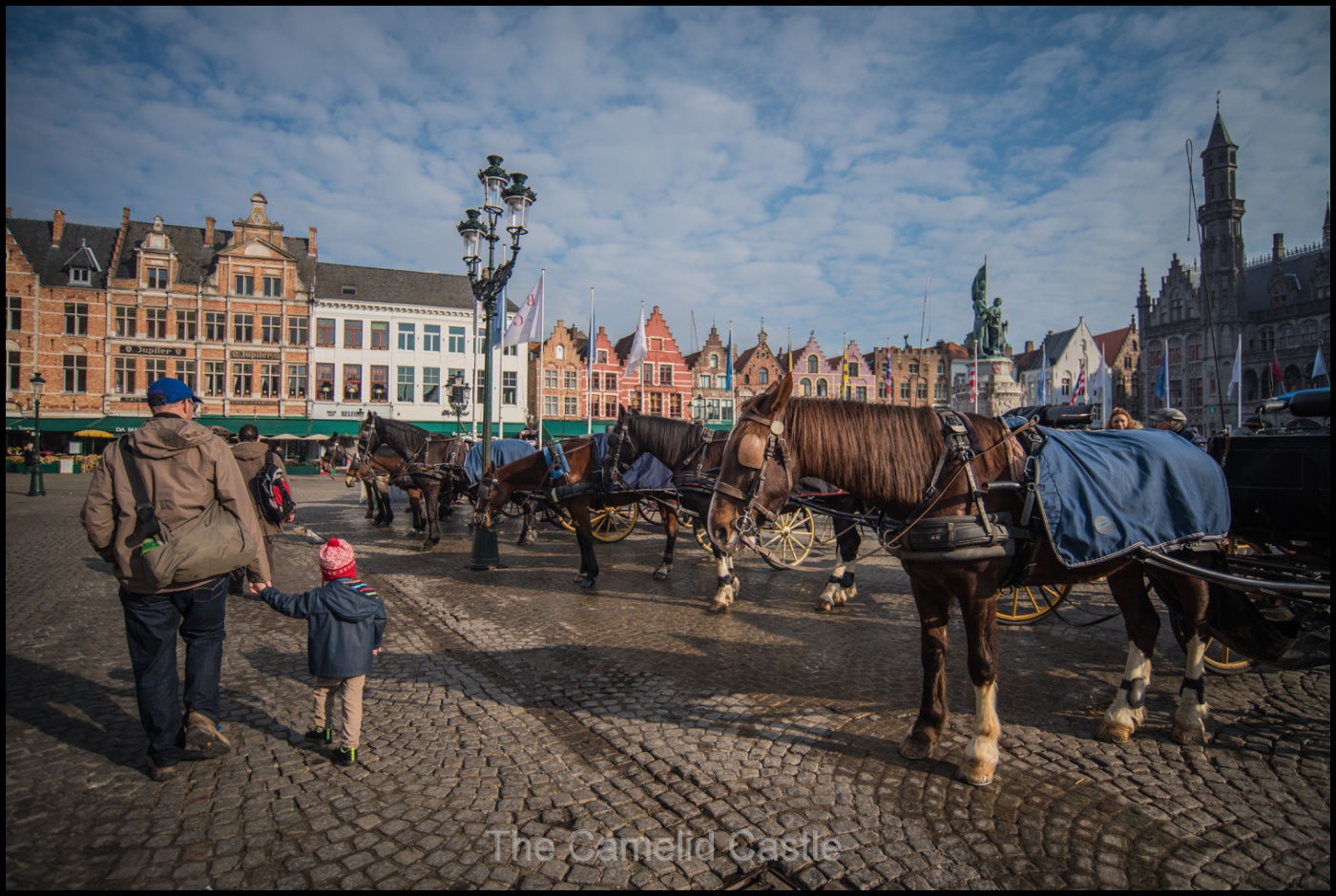 Our first item on the agenda was a walk through the main square (to say hello to the horses) and then a wander along the canals towards the St Janshuis and Koelewei windmills. The St Janshuis mill is open to visitors (from April, so we were a few days too early) and still a working mill, grinding flour. The 4 Koelewei mills aren’t open to visitors but all are located close together.

The walk along the canals on a sunny Monday morning was very pleasant as the sun was out and the water was still.  We noted how similar it looked to both Haarlem and Leiden in the Netherlands, with the canals and row houses. 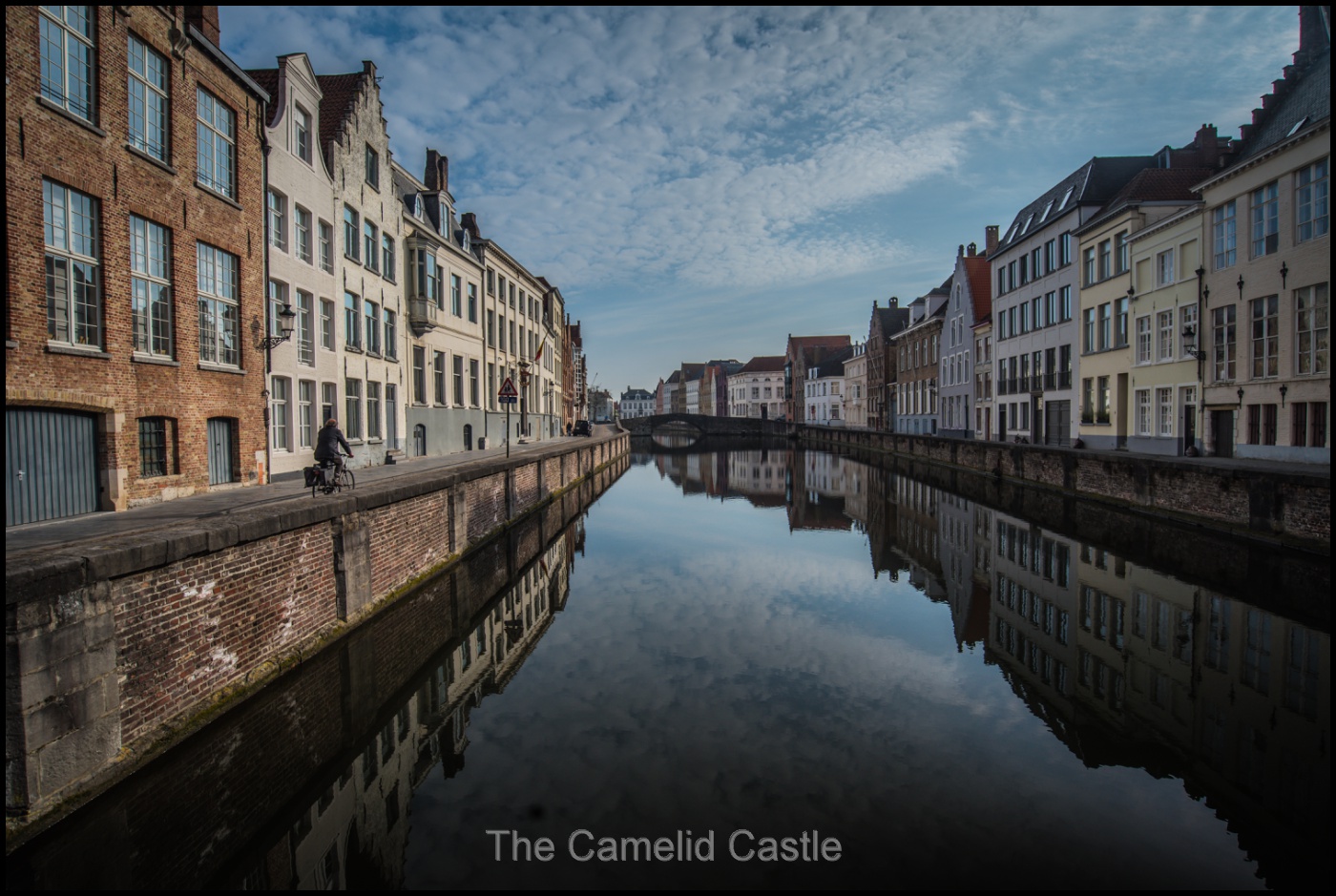 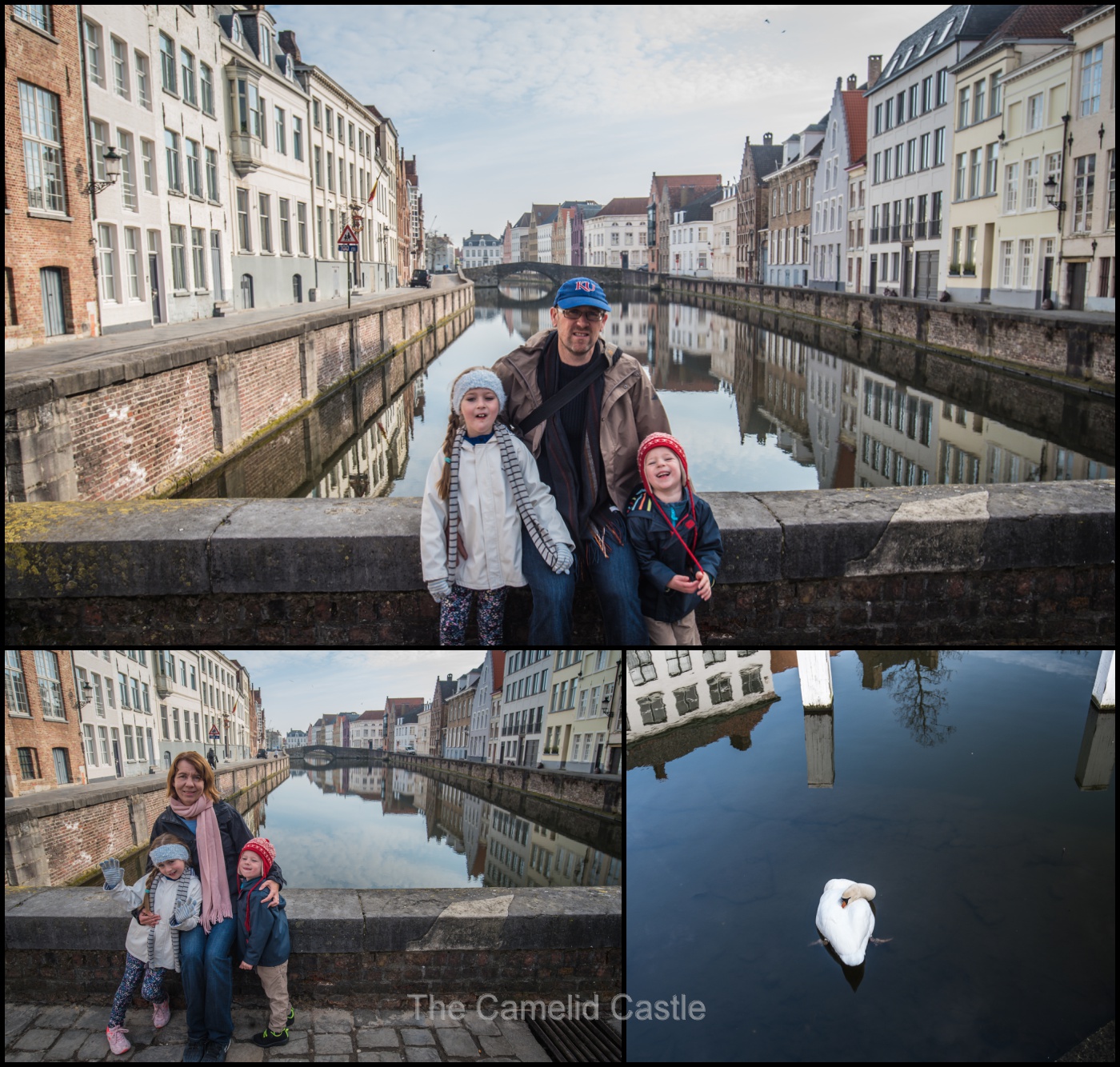 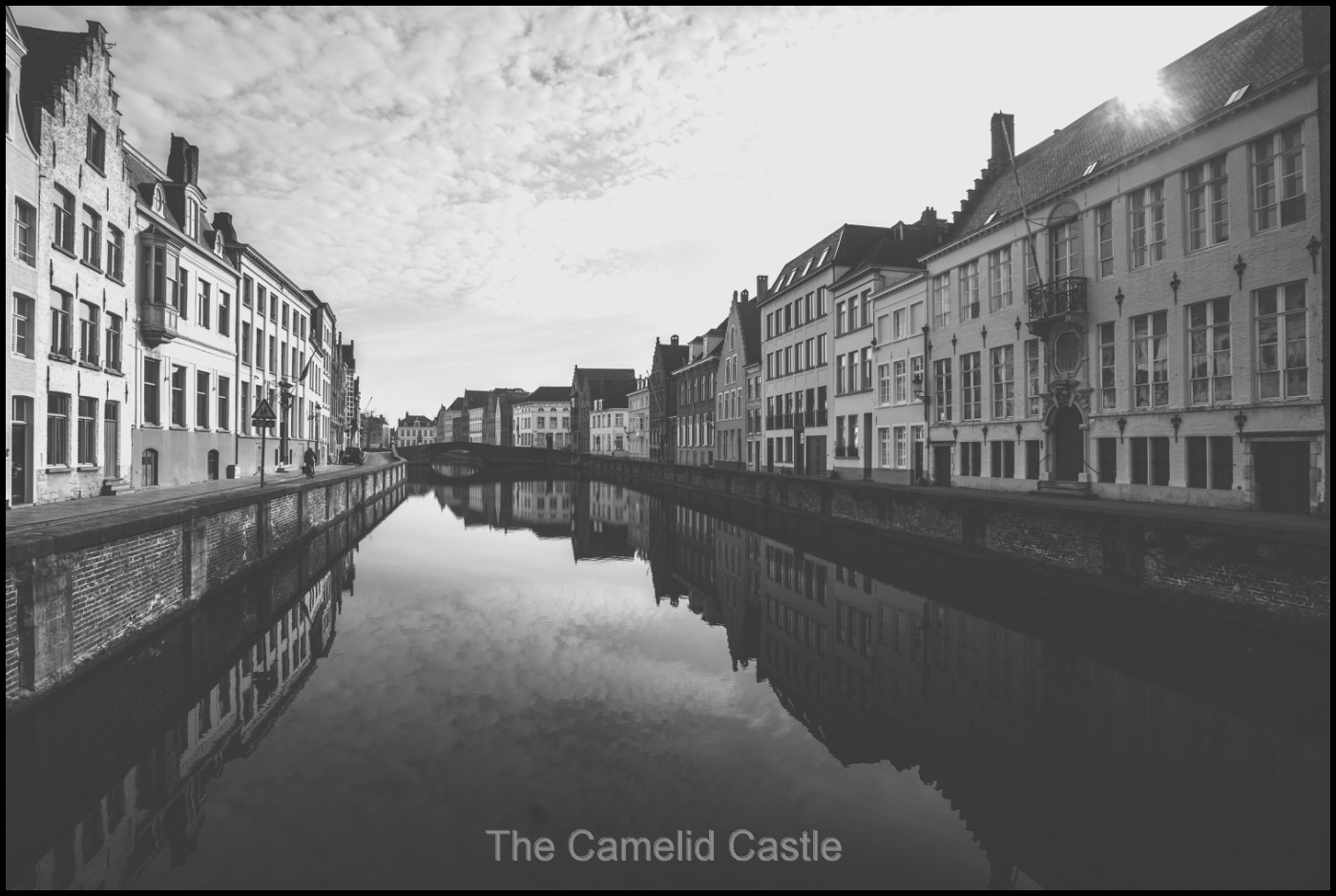 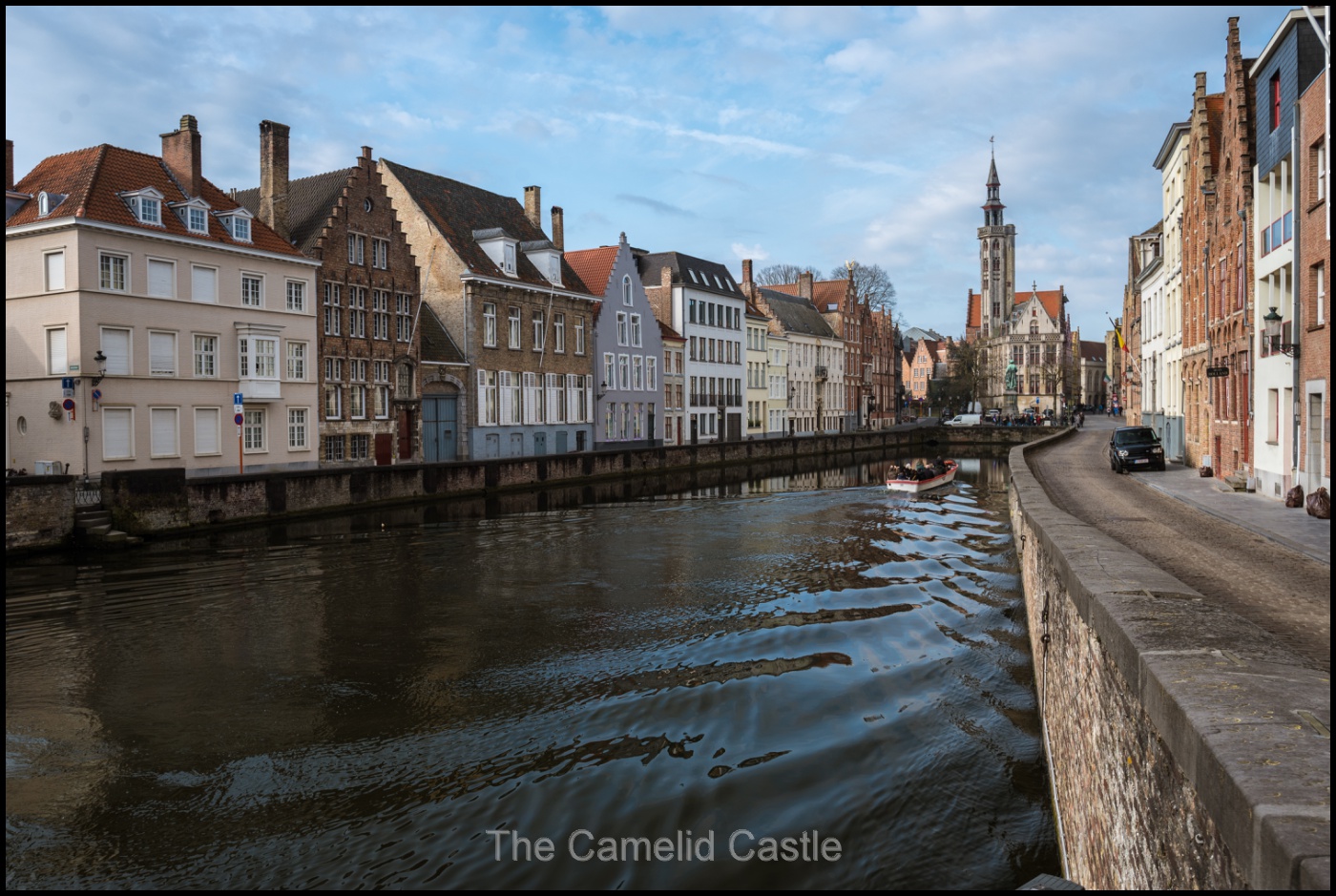 The windmills are built on the ramparts of the outer city wall when it was constructed in the 13th century.  We also found a few large boats moored which made Soren happy!  We’d seen plenty of windmills during our riding around the Netherlands, this time last year and it reinforced how this area of Belgium (Flanders) is very similar. 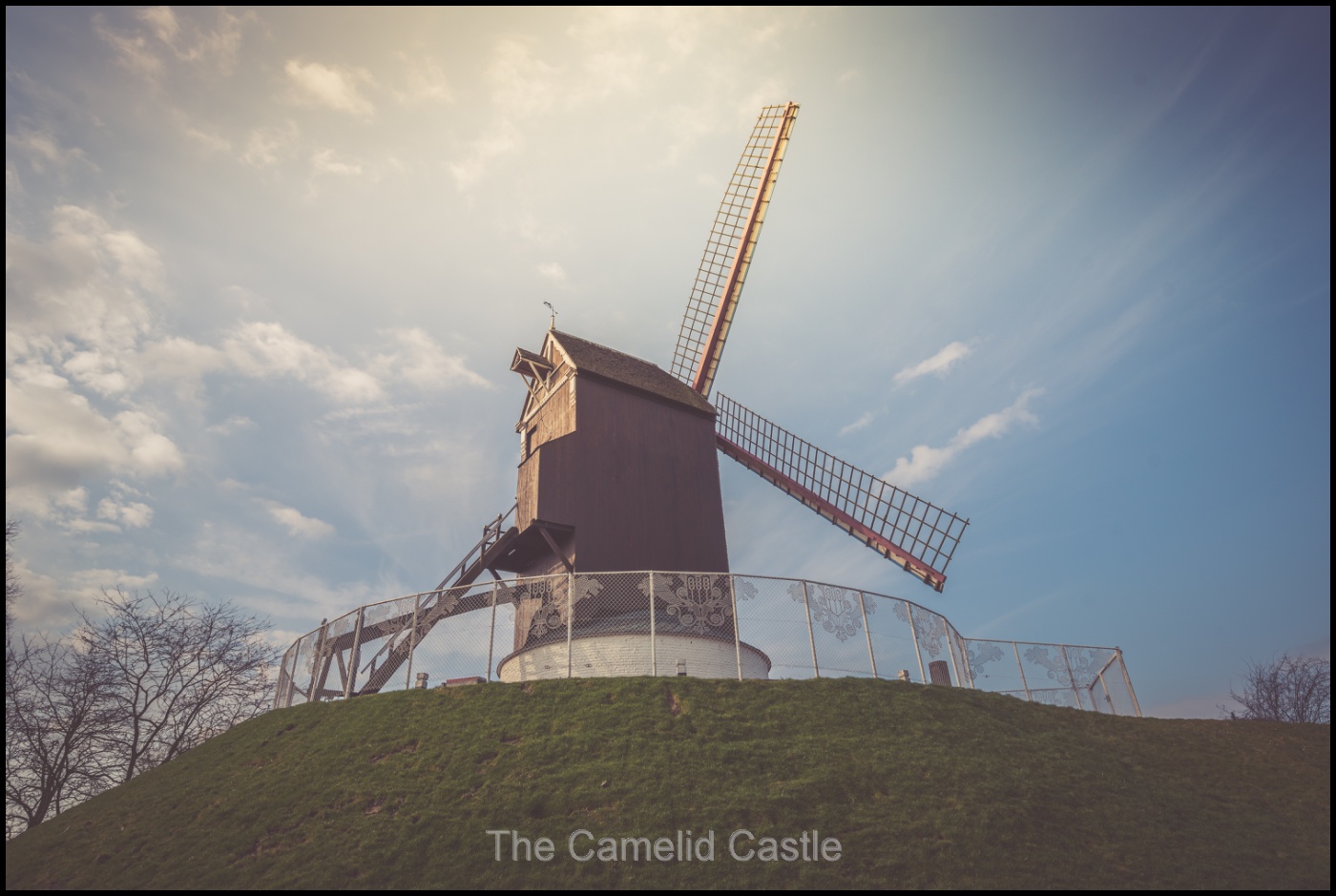 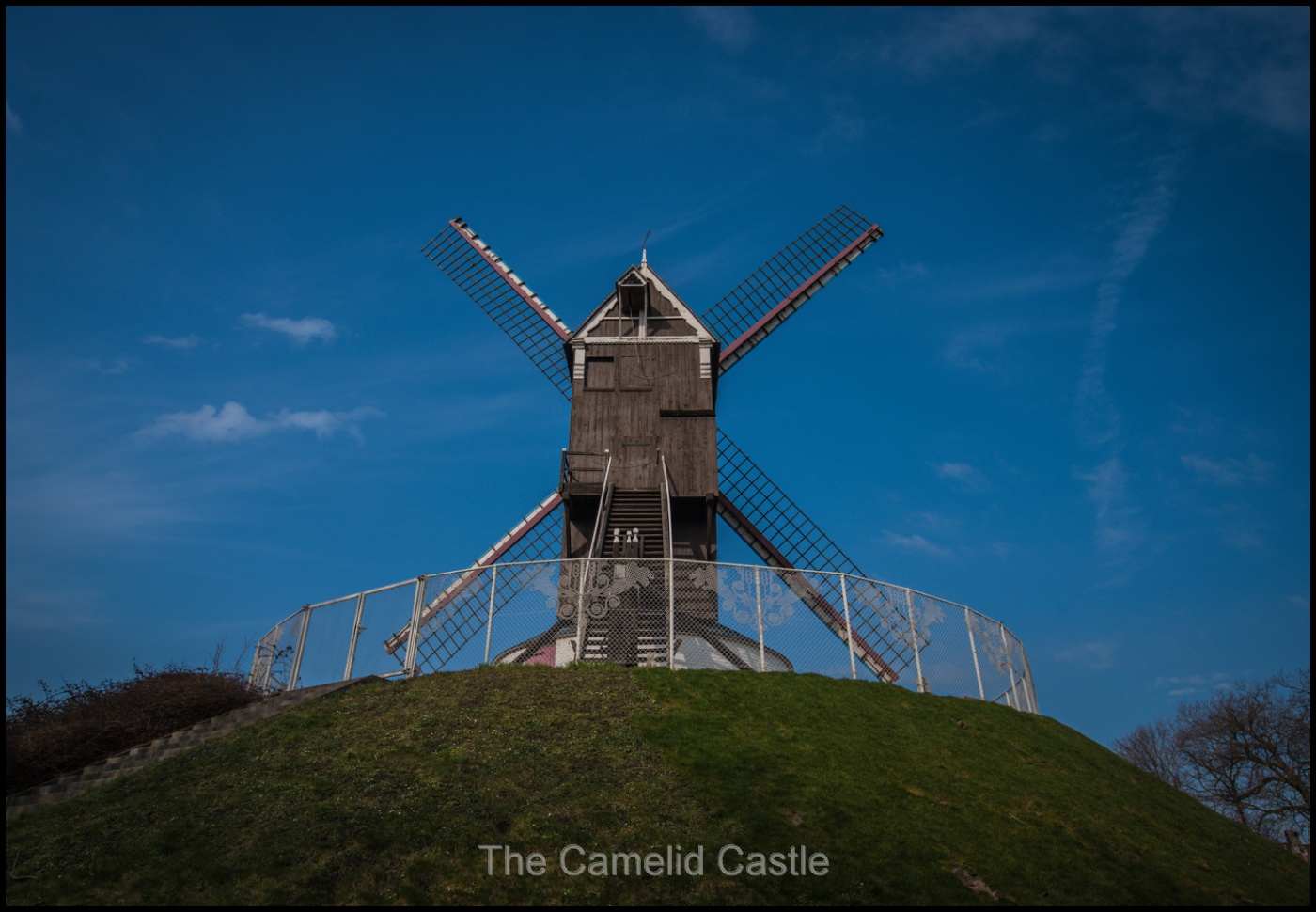 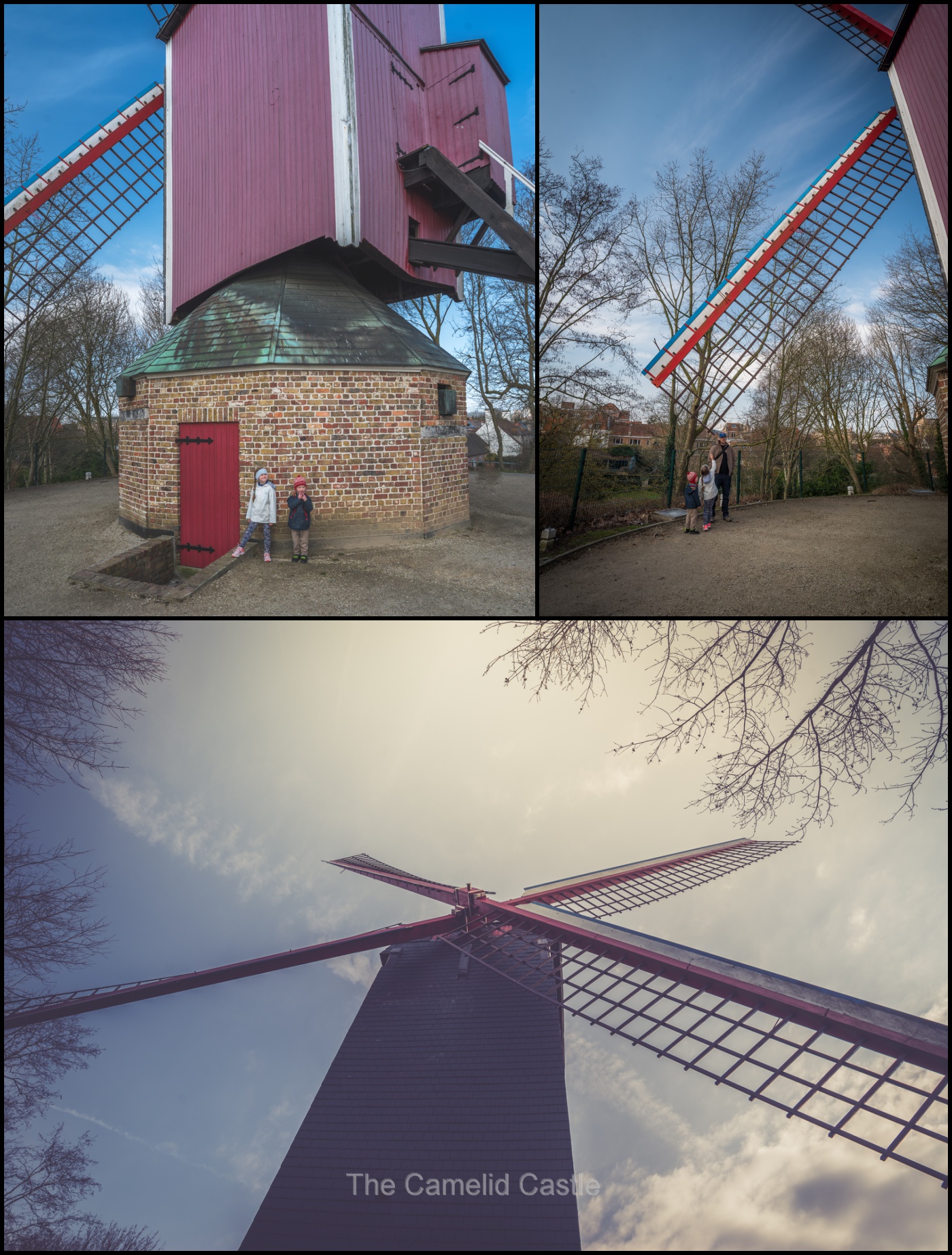 We wandered a different way back through sections of Brugge we had not yet walked, there are plenty of pretty streets and cafes you could explore for days if you wanted.

Next it was off to Markt square for the promised horse and carriage ride. We’ve never done one in any of the other cities we’ve visited, due to bad weather and/or cost.  Today the sun was shining and despite being cool it wasn’t windy.  At 50 Euros for 30 minutes, while it’s not a cheap activity, it is significantly cheaper than any other place in Europe we’ve seen them. Brugge is also a beautiful city so it seemed a fitting way to see it.

As usual the horses were lined up ready to collect their next passengers. Sophie was our driver and our horse was called Morris. The ride goes for 30 minutes through the oldest part of town with a 5 minute break in the middle for the horses to have a rest and water. 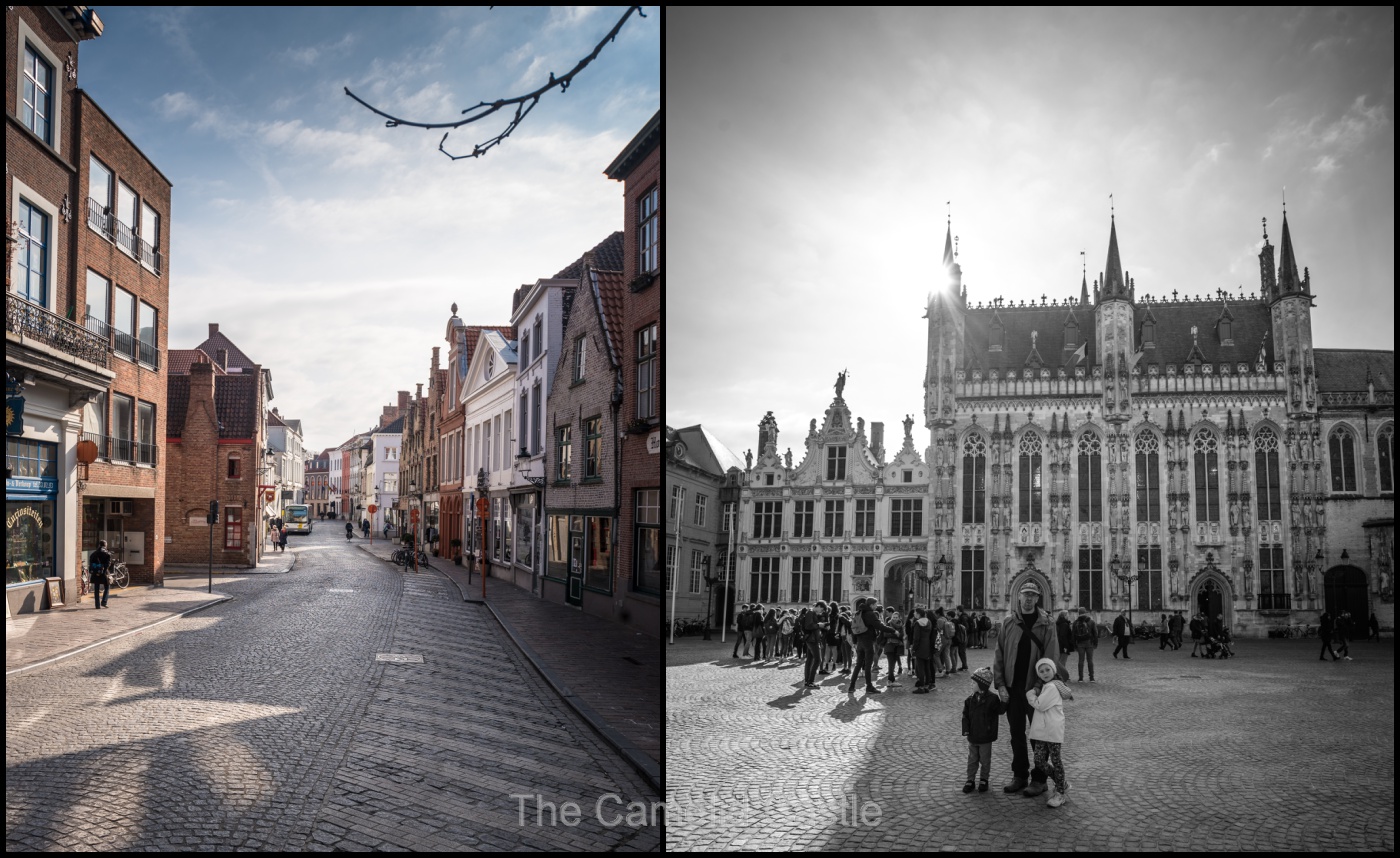 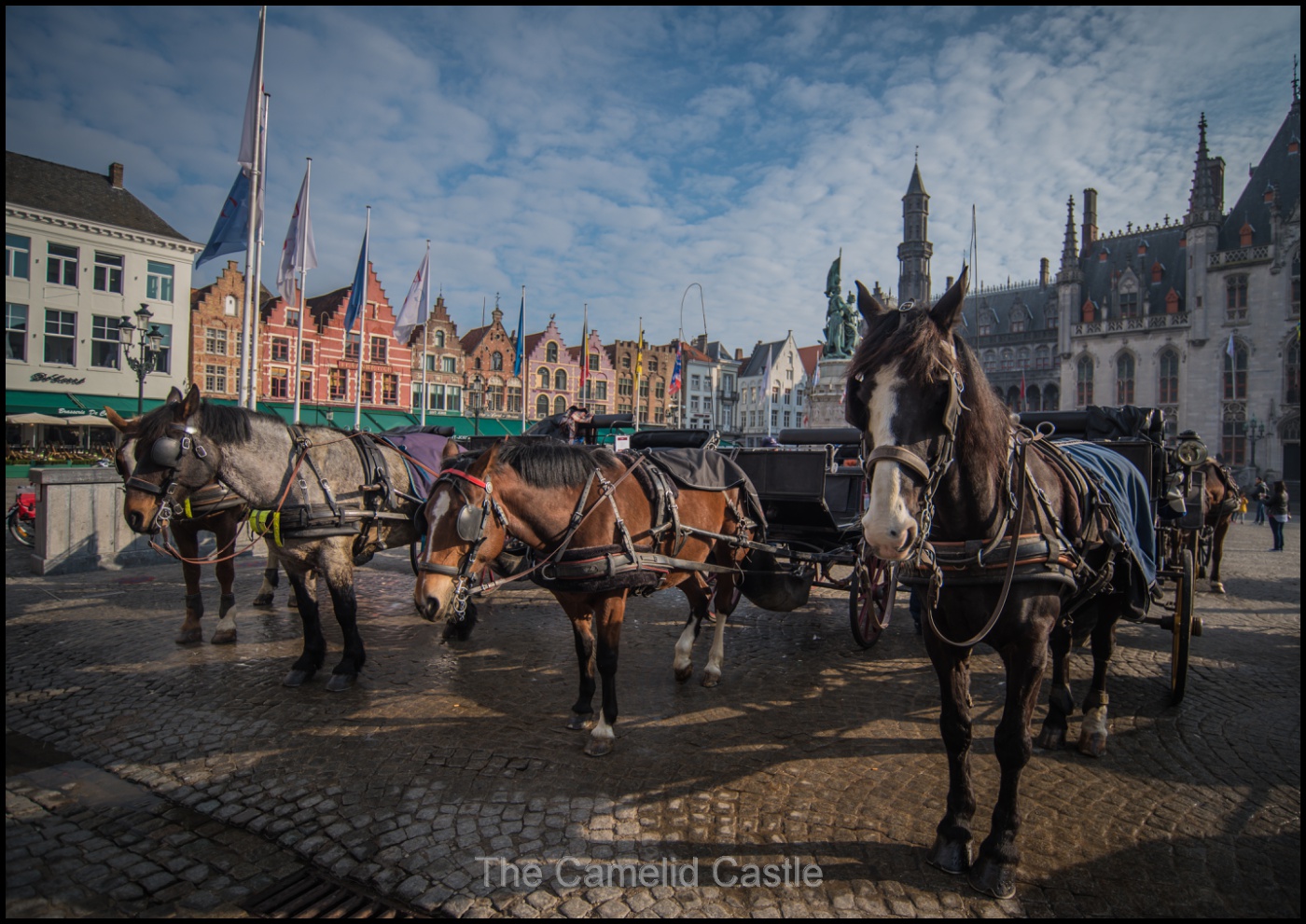 Soon we were off with Morris trotting along and the grins from the kids were priceless!  They were looking all around and squealing and clapping with excitement. 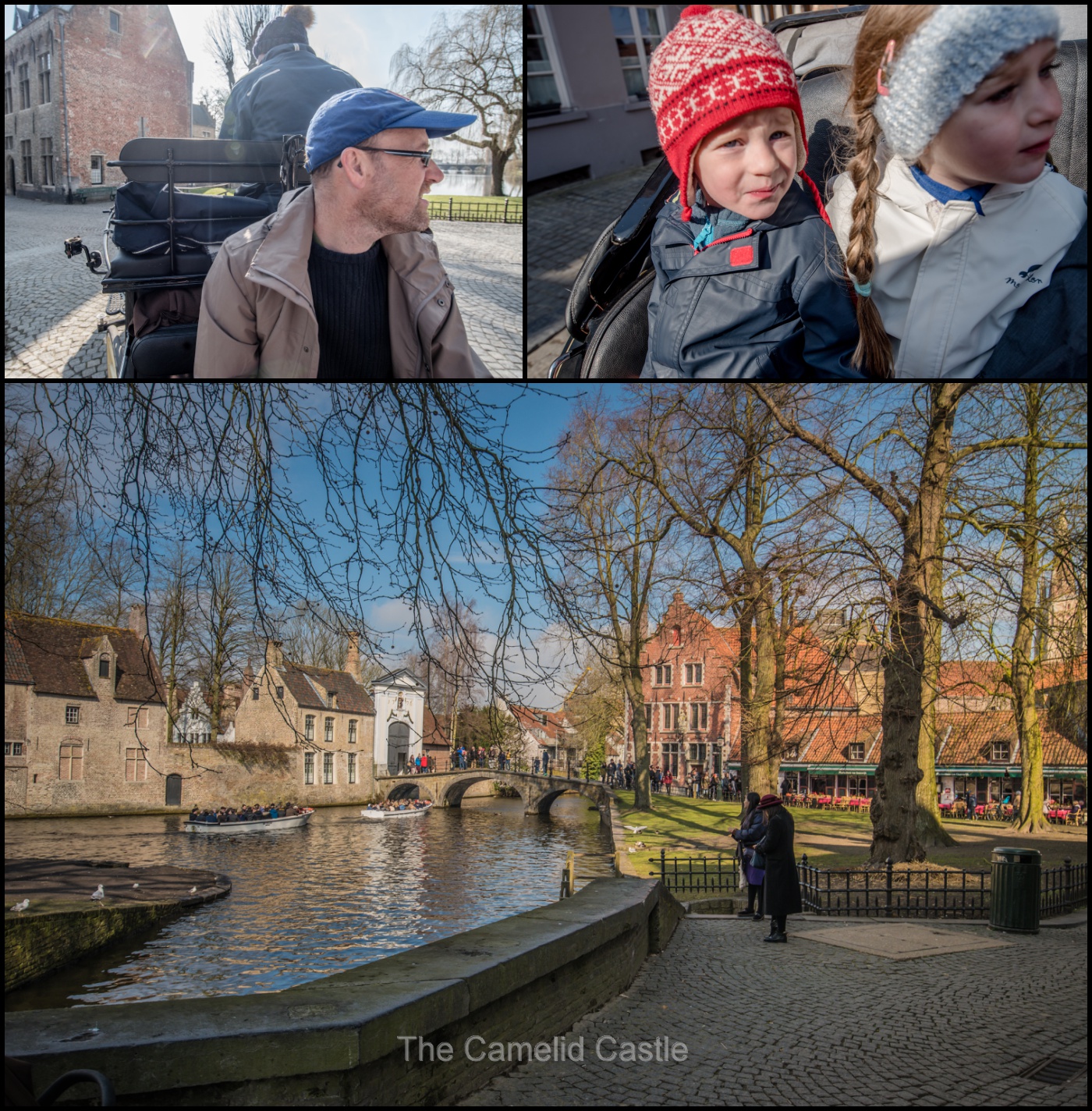 The track Morris took went through the old town past lots of things we had already seen but Sophie’s commentary was interesting and it was great learning a little more about the areas we’d walked lots of times.

The break station was right next to the Minnewater (lake of love) where there is a horse fountain their buckets of water are filled from. Morris also got some food, while we wandered back over to the Béguinage gardens for another quick look. 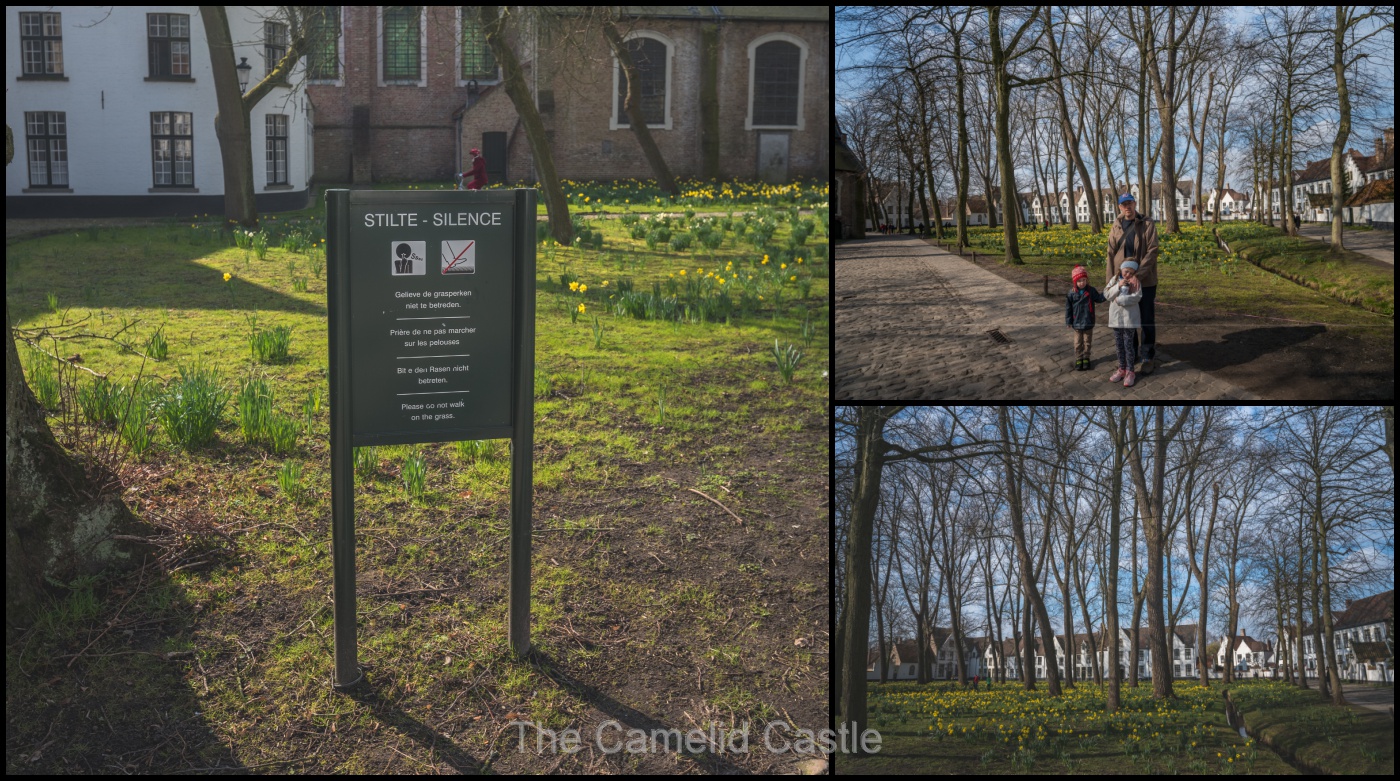 Sophie kindly took some photos of us in our carriage before it was time for Morris to get us moving again.  The horses do the same track over and over so know where they are going and speed up and slow down for the commentary, in some sections they get some real pace up!  Soren was grinning his head off again and Astrid loved the clip-clopping of Morris was pulling us along. She was fascinated to think this was the mode of transport before cars were invented…… 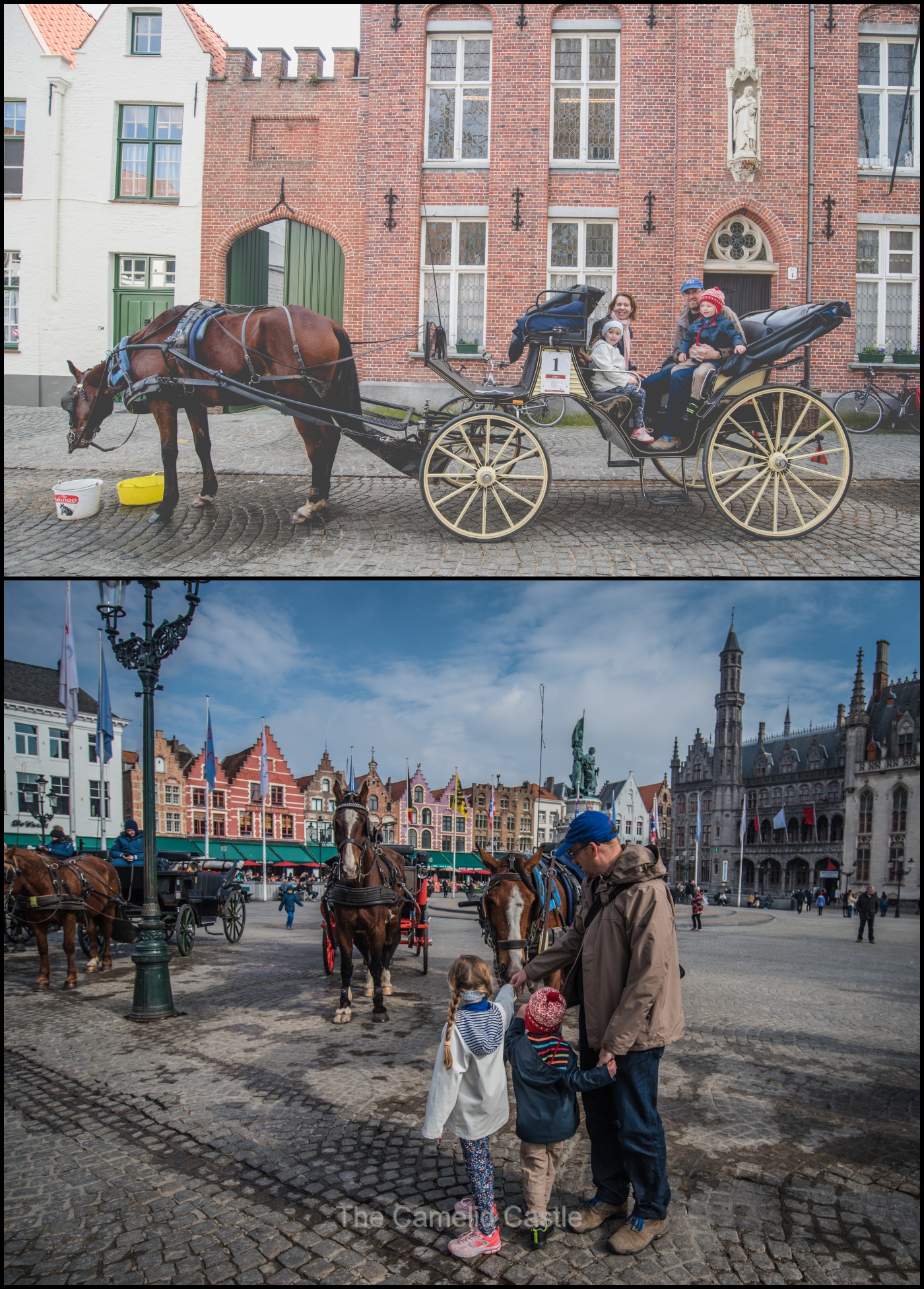 The last part of the ride took us past chocolate shops (Sophie confirmed our favourites were the best in Bruges), churches and through the main squares were again we learnt things we didn’t already know. Once we reached Markt square again we said goodbye to Morris and Sophie, and declared it was time for waffles.

Despite not being all that hungry it was our last day in Belgium so food just needed to be eaten!  We went to Chez Albert, reportedly the best street vendor in Bruges.  Our selections for the day were cherries with cream and a caramel waffle.  They smelt pretty delicious so we wandered back down to Markt square and ate them watching the horses go in and out, it was a popular morning for rides and people were lined up waiting.

The waffles were awesome and a fitting last meal in Belgium.  We had a few last-minute souvenir purchases and a revisit to some of the chocolate shops to purchase a few more items. We had discovered the dark chocolate coated oranges we’d purchased the other day from Dumon were so good we needed a second box, to sustain us through Iceland (a wise move we later discovered!).

With full bellies and more chocolate we walked back through streets for final time to our hotel where we had a coffee and sit down in the warm before collecting our luggage and trundling off to the train station with our bags.  Soren came up with the brilliant suggestion of taking the bags via another horse and carriage ride, but sadly we just had to walk dragging them.

We managed to get on the direct train to Brussels-midi which was much faster than the one from Brussels to Brugge on Saturday. We sat with some American Jazz musicians and the kids were fascinated by the double bass, especially how they were getting it on and off the train.

We changed at Brussels and a short but not too cold wait for our Thalys train to Paris.  Our 1 and only high-speed train for this trip. 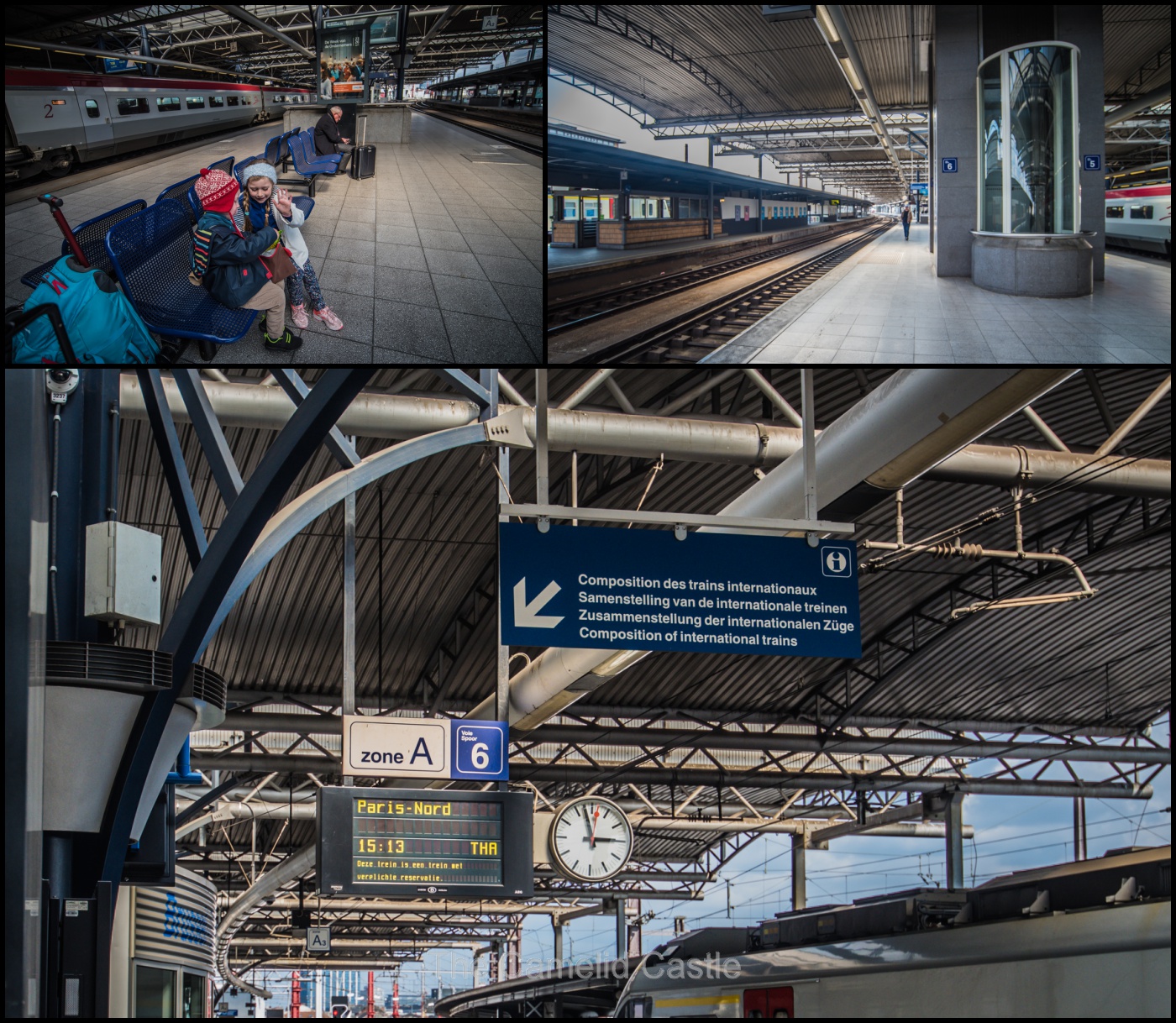 Unfortunately the train was packed but we luckily had reserved seats (which we did have to kick people out of).  We weren’t sure where the train originated but there was luggage everywhere! The train quickly reached 300km/h and the journey into Paris was only 1 hour 20. With the tilting of the train Astrid was feeling a bit sick towards the end but we managed to escape the train without any vomit (it wasn’t looking good at once stage, she has form in this area!).

Once we were off train at Gare du Nord we discovered our plan to jump on the metro line 4 for a few stops down, with only a short walk to our apartment was not going to work as line 4 was not stopping at Gare du Nord for a few months due to line maintenance.  Our next best option was to walk the 800m over to Gare de L’est and get line 4 from there…….. but then we calculated it was only going to save us 200m of walking in total and we would have to deal with a peak hour metro and stairs.  The new plan was to put the bags on our back and walk the 1.5km to the apartment.  A longer than desirable walk with luggage, but doable.

Luckily we kind of knew were we were going having spent lots of time in Paris over the past few years. It was busy being about 5pm but we made it eventually and dragged the luggage up the 3 flights of stairs to our Paris home for the next 10 days.

The kids were very over-tired and our Airbnb host was lovely, but being very chatty and even wanted the kids to see his cat (he lived next door, in interestingly the apartment designed and owned by the ‘Inspector Gadget’ creator) but we needed to get them fed and to bed so had to decline the offer of drinks and cat visits and wandered off for a walk down nearby Rue Montorgueil to pick up some quiche and salad and a few groceries. Being Paris, we also got some baguette, cheese and patisserie.

We got back to the apartment and realised that we had managed to get 2 pieces of quiche Lorraine instead of 1 Lorraine and 1 chevre, so I missed out on my quiche dinner that I had been looking forward to (the kids offered to pick out the meat) but luckily the other stuff was excellent. 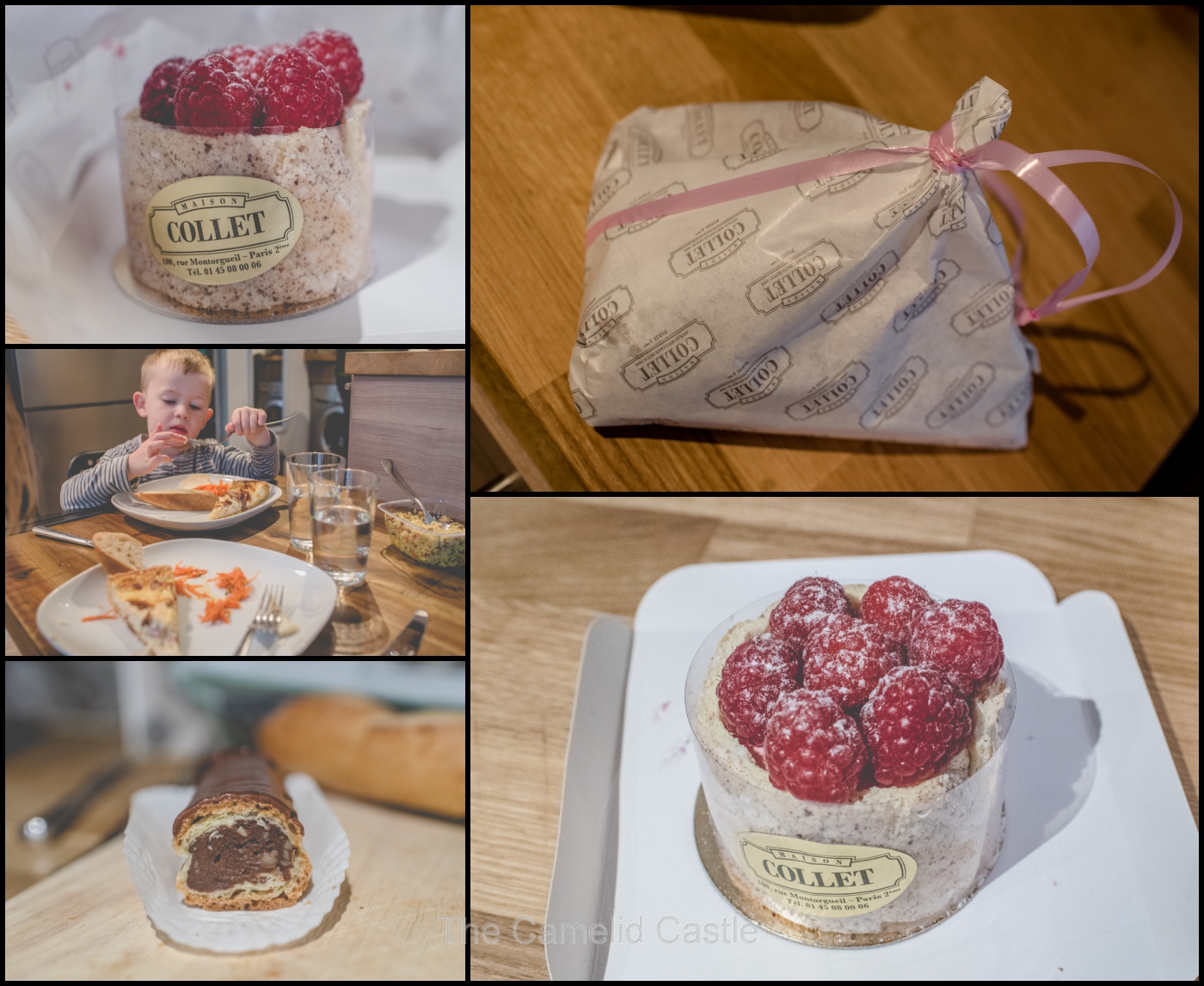 Dessert for our first night in Paris was chocolate eclair and a raspberry charlotte. Oh we had missed French pastries!

The exhausted kids were in bed by 8pm while adults unpacked.  With 10 days in Paris it was time to empty the bags out and get settled.

Daily statistics for Monday the 26th of March 2018, in Brugge, Belgium and Paris, France –   Brugge was a chilly 3 degrees in the morning, rising to about 7 degrees by the time we departed (but sunny with no wind).    Paris was a pleasant 13 degrees when we arrived in the afternoon.  The total walking for the day was 13.2km (unfortunately a few kilometres of that with bags!).

Up next, a wet 40th birthday in Paris, but there was some pretty amazing food, including a visit to Le Souffle for a birthday lunch!