While the weather was being reasonably good (meaning not totally freezing and not raining) we decided we should get some of our ‘day’ trips done. We have a few out of Paris trips we want to do and we don’t have that long left to fit them all in.  One of our planned trips was to Giverny to see Monet’s house and garden, which was supposed to be spectacular.  We happened to look this up the other day and realised it was closing in a couple of days for Winter, so it was now or never.

I am still sick with a chesty cough and gunky eyes and Astrid has the same thing. She hasn’t been too bad, but woke up this morning with really watery eyes and not looking the best. We decided to go anyway since she seemed fairly chipper and was racing about.  We left about 9.30am and picked up some fresh croissants for morning tea and some baguette for lunch and stashed them in the carrier for later.

It was a short metro ride to Gare Saint Lazar. Once there we had to find the main line trains and buy some tickets to get us to Vernon. We thought we accomplished this task, and we headed to find our platform. Let’s just say that the French trains don’t run as efficiently as the Swiss trains. The metros are really good (as is the RER) and you rarely wait longer than a few minutes no matter when you turn up to a platform. The intercity trains were a different matter and they were very slow putting up the platform numbers. We were a bit early as we weren’t sure where we were going so we had a long wait in the cold to figure out where our train was going to be.  It got to our train departure time, no platform number and no train. There was a message about the trains being ‘perturbed’ but we didn’t ever figure out what the actual problem was.  We finally had a platform number and headed down, only to realise our tickets didn’t appear to be correct. We then frantically tried to get the correct tickets and get on the train before it left.

Buying the second lot of return tickets made the trip rather pricey. We will try and get a refund on the first (unused) lot but we aren’t sure if that will work.  We got on the train, and despite it being rather long and double storey, every carriage was packed. People were sitting in aisles with bags littered everywhere. It wasn’t looking good as we wandered through carriage after carriage with the same story. We had only one small bag, but we did have Astrid in the carrier and we didn’t fancy 40 odd mins standing with her strapped to us. We eventually found some seats upstairs in a cabin, only to realise they were first class. We considered moving but there weren’t many other options and the couple opposite us informed us they also didn’t have first class tickets, so we took a risk and stayed.

The couple sitting in our 4 seat bay were older and in Paris for a week visiting their daughter. They were from San Francisco and had been to Paris before. They were really good to chat to and they loved talking to Astrid. The 40 minute trip passed quite quickly, and luckily our tickets were never checked. Which means we could have gotten away with the original ones!

We arrived at Vernon and it was nice to see a little bit of the French country side. This was our first trip into rural France and the open spaces, farms and villages were nice to look at.  The Monet gardens are in Giverny which is about 5km from the train station in Vernon. We could have walked it easily but since we had a sick Astrid we decided to make our day a bit shorter and take the bus connection.  For every train there is a bus that connects to the gardens in each direction. There were 3 coaches for our train and they were pretty much full. The town must have been making a fortune out of the buses as they charge 6.50 Euro each for a 5 minute ride.  It was easy and convenient though.

Astrid had been really good on the train. I think all her train rides from last week in Switzerland have made her more train compliant. She was a bit cranky on the bus though as she was over due for morning tea and a nappy change. Luckily it was only a short ride and she was happy once we got off the bus, had her nappy changed and scoffed some croissant.

We noted that even bus car park at Giverny was full of beautiful grasses and drifts of flowers, so it bode well for the actual gardens. As we had been delayed dealing with Astrid everyone else from our buses had disappeared. We headed off in the direction of the gardens only to get confused by the lack of signage and we ended up wandering through the village of Giverny for awhile. Which seemed to be full of quaint cottages that were mostly cafes or selling art, with a few private properties.  At this stage Astrid had fallen asleep in the carrier so we hoped she was going to get a bit of rest.  We finally found the gardens and there was still a bit of a line for admission. 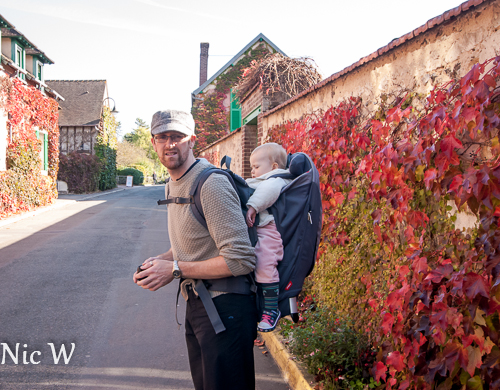 The garden is attached to the house where Monet lived for the last 30 odd years of his life and where he painted many of his famous paintings. The gardens are quite large and consist of the Clos Normand of about 1 hectare which is full of rows of plants, arches covered in plants and rows of different flower beds. Even though it is late Autumn and the gardens are about to close there was still plenty to look at. Lots of common flowers, like daisies mixed in with rare varieties and heaps of very impressive dahlias.  We noticed the plants were planted in different grouping heights and colour drifts.  We also loved the huge fluffy bumble bees we found. 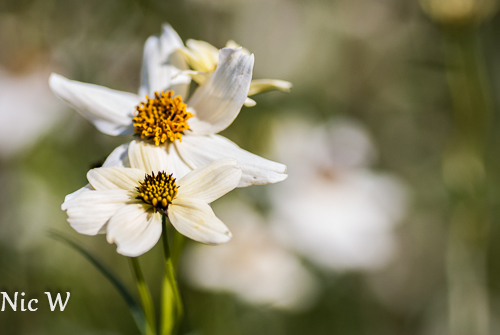 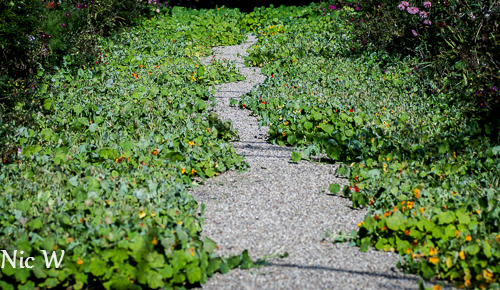 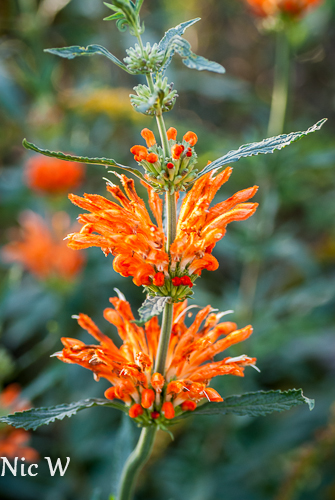 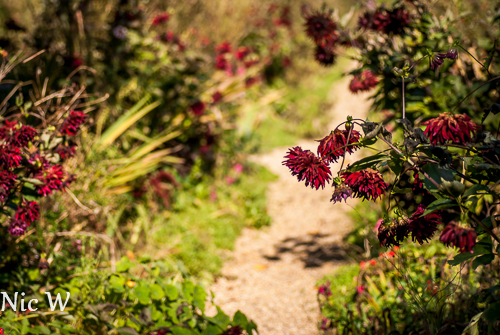 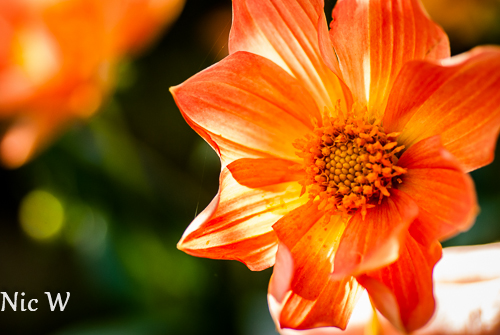 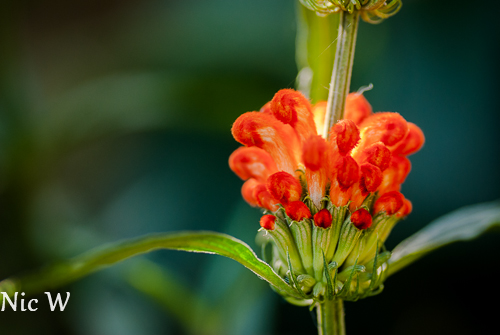 We then wandered down to the Japanese water garden which is a huge pond fed by a stream which is tributary of the Seine.  It is surrounded by Japanese maples and full of water lillies and crossed by a Japanese bridge covered in wisteria. At this time of year the wisteria wasn’t out and the water lillies weren’t flowering but it was still spectacular.  It would be a lovely place to sit for many hours on one of the many park benches.  It was pretty busy though and Astrid was still sleeping so we walked around, admiring and taking photos and headed back to the other section of garden. 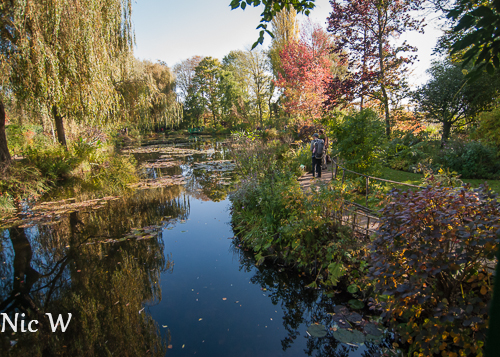 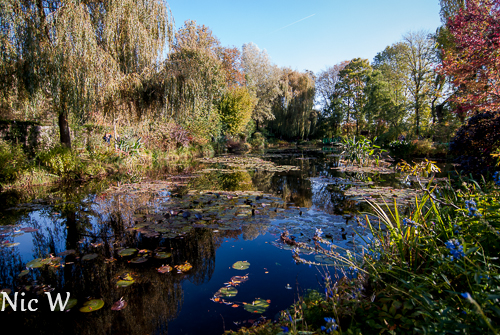 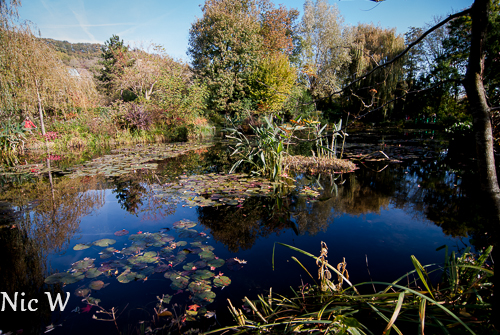 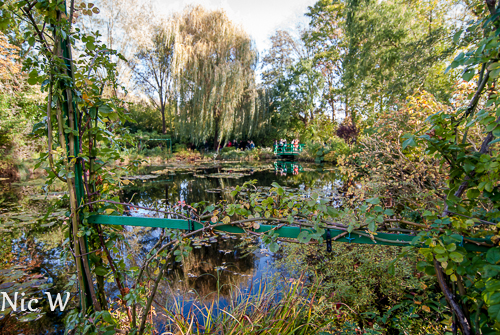 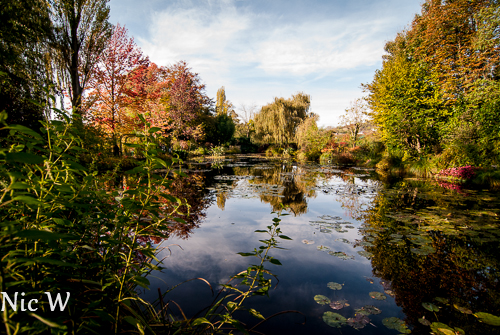 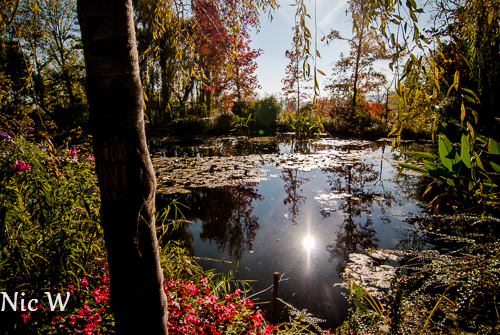 Astrid woke up and entertained some Japanese tourists. At this stage we noticed her eyes were exuding green gunk, which was pouring out of her faster than we could clear it up.  We let her have a walk around and took it in turn to walk through Monet’s house. It has been restored and it quite large and has spectacular views over the gardens and lots of lovely light. It is full of the original furniture and Monet’s paintings and comes equipped with multiple security guards to make sure you don’t touch anything or take photos.  Astrid was busy walking up and down the nearby stairs, obviously missing our stairs from home.  We’d been there a couple of hours and since you are forbidden to picnic in the gardens we headed outside to have our lunch of baguette, cheese and chicken we had bought with us. 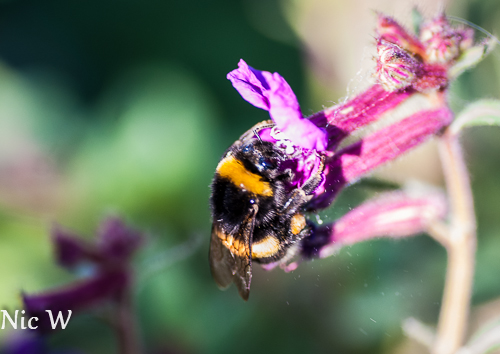 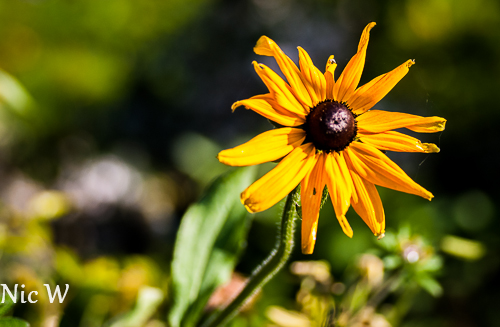 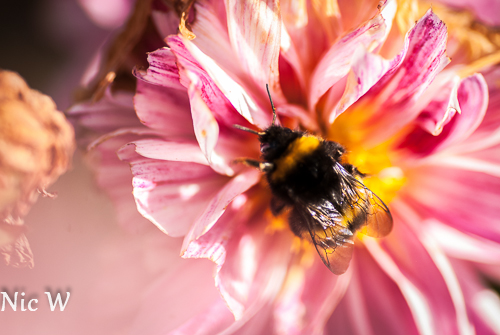 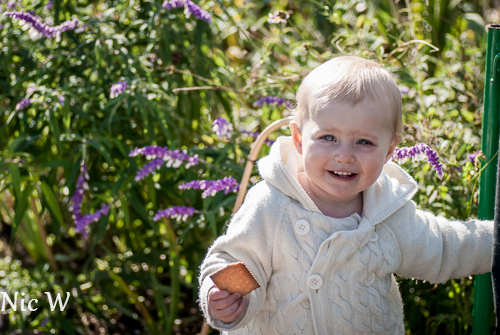 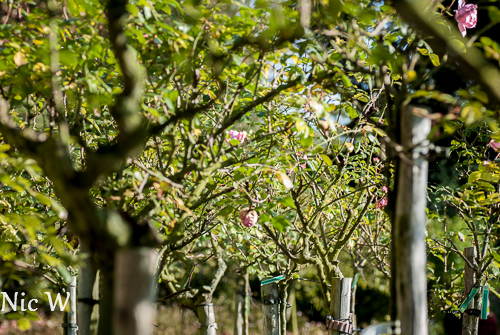 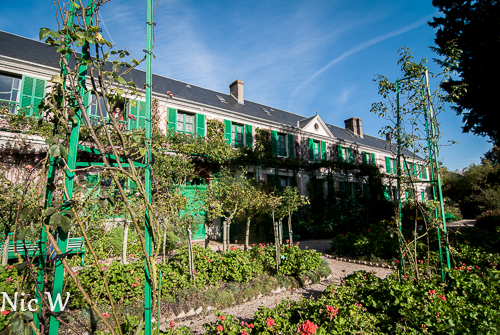 We wouldn’t have minded walking around the town some more and hanging out at the cafes but it was a 2 hour window between trains and Astrid wasn’t looking well so we decided to head back to Paris.  She was good on the bus and on the train we strapped her into the ergo to stop her wiggling around and she fell asleep, so that trick has worked at least once, not sure it will work next time but it was good this time around.  The connections were mostly on time so we made it back to Paris by 4pm.

We headed to a chemist but could only get saline for Astrid’s eyes and she was pretty messed up. The saline helped and after a big shower and some dinner she felt a bit better.  This our first case of conjunctivitis and so far we aren’t fans. We are hoping it clears up soon……