We have been planning to do some museums during our trip. We aren’t huge museum people, and not great art lovers but we HAD to go to the Louvre. It just isn’t a very baby/toddler friendly activity. Our original plan was to tag team wandering around the Louvre with Astrid playing in the park (Jardin des Tuileries).  Unfortunately, with Astrid being sick and it being quite cold out, we wanted to   keep her inside.

The first Sunday of every month in Paris is free National museum day.  November is the only month we are actually in Paris for the first Sunday of the month, so we figured we might as well take advantage of it and go to a museum. If we were going to go to a museum it might as well be the grand-daddy of museums, the Louvre. It is the world’s biggest museum with 35,000 exhibits and 60,600 square metres of exhibit space. It will reportedly take you 9 months to look at all the exhibits. We knew we were only going to get to see a small fraction of the exhibits in our visit but we were hoping to at least get a small taste of the Louvre.

The Louvre opens at 9am, and figuring that it would get busy we headed down there early, arriving just after 9am.  Nothing is ever busy in Paris in the morning but the lines were already stretching all the way around the central courtyard, and given how big that courtyard is, the lines were huge. We had taken the stroller and had read that you can skip the queues if you have a stroller. Sure enough we were 10m from the front entrance and were waved over and directed straight through and onto the very trendy open circular lift that takes you down to the main foyer. 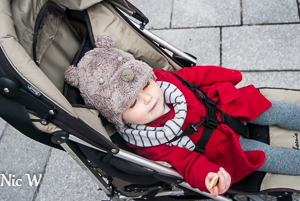 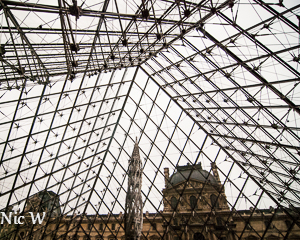 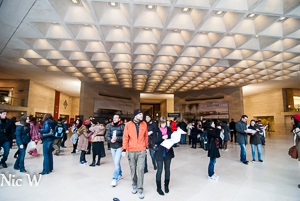 Astrid had fallen asleep on the walk down to the Louvre and we were keen to get some museum viewing done while she was asleep.  The Louvre is enormous from the outside and the inside is just as overwhelming. It is a gorgeous building with lots of open space, divided into wings.  We grabbed a map and headed to the Sully wing, as it was nearby and not looking too busy. People were streaming in and we were trying to avoid the tour groups.

The Louvre was originally built in the 12th Century by Phillip II as a Fortress. We were keen to see some of the Egyptian exhibits and the remnants of the medieval (original) Louvre from the 12th Century and moat relics. We happened to encounter this straight away and it was impressive. 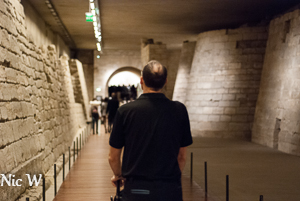 Astrid continued to sleep as we found some of the Egyptian antiquities and looked at the mummies and scarophaguses, and sphinx.  We now discovered that the downside of the stroller is that many of the exhibit areas are linked by stairs and any lifts generally only go between 2 floors and you usually have to back track through exhibits to get out, and often go up and down stairs anyway. We frequently got lost, but that meant we got to see a variety of things.  Just walking through the building with it’s high ceilings and huge windows was impressive. You realise how huge the building is you wander through and it just goes on and on, and you have only been in one fraction of one floor in one wing. 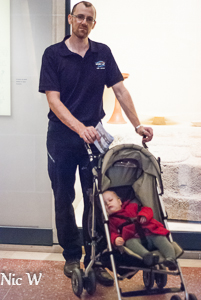 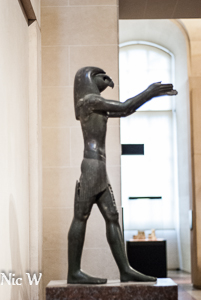 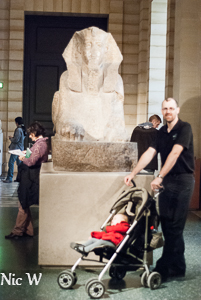 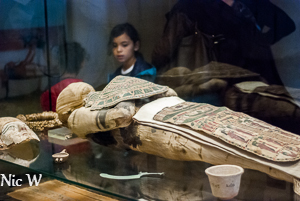 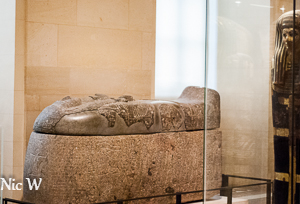 Astrid woke up and was happy to wander with us for a bit. Then she realised she was hungry so we promised morning tea and attempted to find our way back to the main foyer where the cafes were located. It took us a good half an hour of wandering all over the place, through exhibits, up and down lifts and carrying the up and down stairs to finally find our way out. We did eventually get better at making sense of the map. Astrid was getting pretty grumpy so we were walking pretty quickly through exhibits but we did get to see quite a bit of stuff, if only briefly.

We found the cafes and grabbed some coffee, pain au chocolat and a flan. It took awhile and Anto got to witness tourists getting cranky at the cafe staff and baristas, which only makes them go slower, so you just have to be patient. Even our baby has learnt she has to be patient, although she doesn’t always put this into practice.  Refueled by food and coffee we decided to head back and look at some more exhibits.  People were streaming in everywhere now and the main foyer was quite busy but because the building is so huge it wasn’t too bad once you got into the exhibits.

Prior to heading back in we located a baby change area and made use of it. It was the holy grail of baby facilities in Paris, a baby change, in a male toilet (they are often only in the female toilets) and it was free! We have done so many nappy changes in the stroller or on park benches that this was a treat.

Astrid was wanting to wander through the Louvre and was causing no end of trouble trying to walk through crowds of people and resisting being in the stroller. We did manage to see some of the very impressive Roman statues in the Richelieu wing and then headed into some of the apartments of Napoleon. Napoleon had lived in the Louvre for a period and his apartments have been preserved/restored and lets just say he didn’t rough it! Total OTT grandeur, with velvet, ornate paintings, huge chandeliers and massive dining tables. It was pretty spectacular…… and then there was the ceiling art! 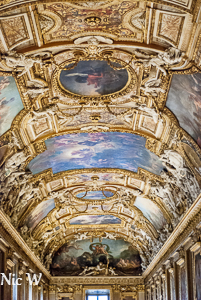 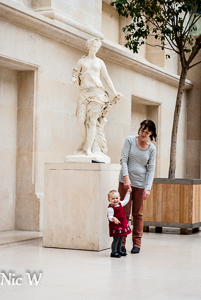 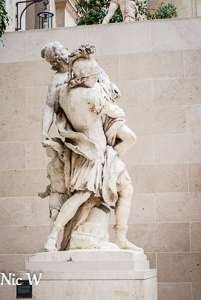 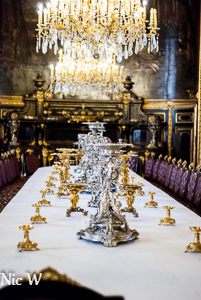 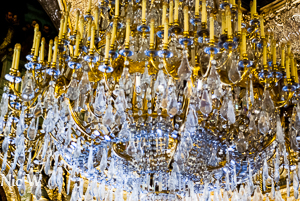 Unfortunately at this point Astrid decided she wasn’t keen on doing anything other than wanting to touch exhibits and wasn’t going to sit in the stroller any more so we thought we should head out. We knew that if we put up 20 mins of protesting she would just go to sleep but it wasn’t ideal in a museum and it was almost lunch time and time for her medications so we headed out and back to our apartment. On the way though, we went through the children’s bookstore and found the most gorgeous children’s books, with exquisite pop-ups and cut outs. We could have bought half the store but did restrain ourselves to just a few purchases.  Astrid better get better at French (or at least her parents need to, in order to read the books to her)!

In the afternoon we had thought about going back to the Louvre as we could skip the lines with the stroller. We were a bit weary though and decided to look through the shops at Le Carousel de Louvre, the shopping centre under the Louvre. At least here Astrid could run around and be noisy. When we got there it was wall to wall people but we had a little wander and Astrid had fun. She might not like museums but the girl knows how to shop! So we probably saw about 3% of the Louvre, but we might go back later in our trip. Today Astrid won the museum war.

We decided that since we were having vegetables for dinner in the apartment we might ‘need’ some dessert. Being a Sunday afternoon not many of our usual Patisseries were open but we went to one in our street we hadn’t tried before and obtained a Pistachio eclair and some creme brulee. We let Astrid try the Pistachio eclair and she did seem to like it!  You’ll note that we now think that when we walk around all day AND eat vegies for dinner we deserve 2 desserts! For the record both were extremely yummy 🙂 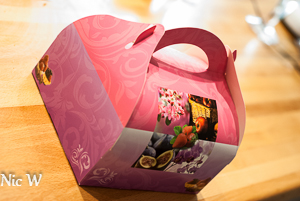 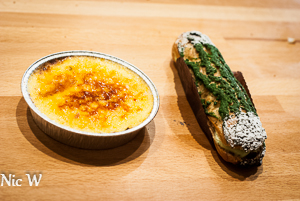