‘Twas the 9th of November 2002 and a warm Spring night in Canberra. Anto took Nic to see a dodgy Vin Diesel movie at the Tuggeranong cinemas.  Ten short (or long?) years later, with a few more wrinkles and grey hairs, we happened to find ourselves in Paris.  While Anto debates the validity of a ‘dating’ anniversary given we have a ‘wedding’ anniversary, I claim 10 years is worth celebrating.

Since we couldn’t find a Vin Diesel movie showing anywhere – admittedly we didn’t look very hard – and the grandparents aren’t here to babysit, what to do to celebrate? We had already completed the requisite visit to the top of the Eiffel tower the day before. Which we noted was actually completed on the 9th of November Australian time, so kind of counts as an anniversary celebration. Given we were in Paris and all, we decided to go have brunch at Ladurée on the Champs-Élysées.

Astrid slept in to the blissful time of 8am and we had a leisurely couple of hours before heading off on the metro towards the Champs-Élysées.  While waiting for our first metro we saw the metro heading in the other direction, on the same line, turf everyone off and go off in the wrong direction, before another appearing a few minutes later (from the correct direction). Given there doesn’t seem to be any room in the tunnels we aren’t sure where it went but we are sure the person left inside sleeping would have gotten a rude shock upon waking.

Once we arrived at the Champs-Elysee and wandered down to Ladurée, noting it was very cold and crisp, we were happy to find they had a free table for brunch. We figured brunch was probably going to be over-priced and average but we were pleasantly surprised. The dining room is very swish and you can’t beat any brunch where you get velvet chairs, pastel and gold crockery and cutlery and the baby highchair is green leather and polished wood!

I ordered the French toast and Anto had dejeuner, which consisted of 3 different pastries, 3 breads, orange juice and bacon and eggs. The pastries were yummy and Astrid tucked in.  We discovered their rolls of butter and the blackberry jam were divine and went fantastically well with the bread. Astrid also approved!  My maple syrup came in the cutest little bottle. Of course there was also the requisite hot chocolate served in silver jugs that is pretty much straight chocolate.  We thoroughly enjoyed our breakfast but ate way too much.  We forgot our pocket camera so were surreptitiously trying to take photos with the big camera.  A lovely lady nearby did offer to take a photo of the three of us together. 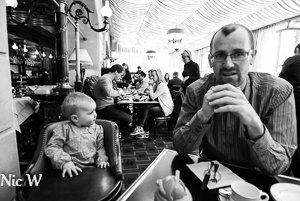 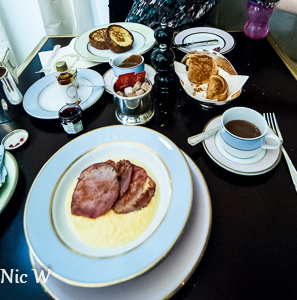 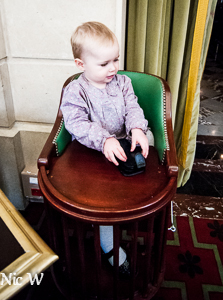 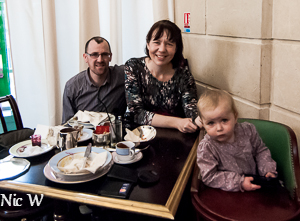 We were so full that we passed on buying more macarons and headed out for a walk in the (still cold) air and a quick look at the shops. It was getting late so we headed back to the apartment where Astrid had a lovely long sleep and Anto managed to head out to a train station and book our tickets for Le Mont St Michel.  He also managed to find me some red roses, which were selected and wrapped appropriately for a gift. It is nice having multiple flower shops in your street (and a lovely husband)!

We were trying to have a quiet day so in the afternoon we headed down to some shops for a quick wander. It was still cold (8 degrees all day) but exceptionally hot in the shops. It was also peak shopping time so we didn’t last long before heading back to the apartment.  We did see yet another dog out wandering the shops with it’s owner. We still can’t get used to dogs being allowed everywhere. We noted on our Chateau visits that most of them allowed dogs, although some areas were restricted to dogs on leads or dogs being carried.

Since we weren’t going out for a big night of celebrating we had dinner in our apartment and put the munchkin to bed before tucking into some of the many types of alcohol available at our supermarket (where their home-brand wine and liquor is superior to our ‘good’ stuff) and this delicious dessert., a St Paul which is layers of cake, mousse and meringue topped with almonds.  Tomorrow we are off to Luxembourg so we are hoping for a good nights sleep. 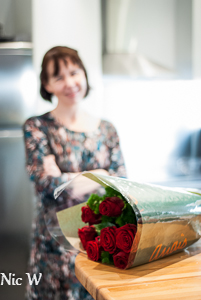 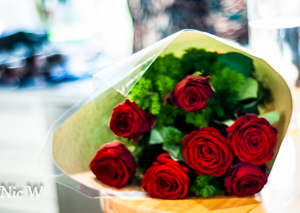 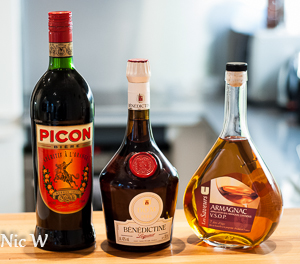 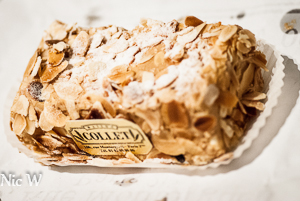