Interlaken
The verdict on the Interlaken hotel is that the location is fantastic for being directly opposite the train station, and annoying for being right opposite the train station. The tour groups were actually louder than the trains but they left early.  The two single beds pushed together with wooden panels down the middle were more of a problem.
Astrid woke up before 7 so we headed upstairs for breakfast. Not as good as the the day before in Montreux but we still managed to eat many types of bread product, meat and cheese. We packed our stuff for the day, including warm clothes and headed to the train station.

The Jungfau Trip
We had to catch the train from Interlaken West where were were to Interlaken Ost (East). We of course missed the first train and had to wait half an hour. Once 5 mins down the track at Interlaken Ost, we also missed a train trying to find the right platform and had another half hour wait. The Swiss are great at not labelling or explaining things. We have had trouble with train connections all through Switzerland because they don’t usually put the same end point on the timetables as what is listed on your ticket, you are supposed to just know where all the station changes are and then it’s easy to figure out. Until then it’s pretty much impossible and we keep having to ask. The Jungfrau trip was again the same. It was sold as a single ticket but involved at least 4 train/station changes and there were multiple different ways to go, through different towns. Once you sorted this out it wasn’t hard, but until then it was all a mystery.

We decided to head up through the Grindelwald route as it’s supposed to be a nice town.  Interlaken is right at the base of some impressive mountains so straight out of Interlaken the scenery was fairly impressive. The first section of the trip was about 40 mins and we climbed from 500m at Interlaken to 1034m at Grindelwald. We did have one stop at Zweillutschinen (forever known as the town that we hook and un-hook at, since we can’t pronounce it) where trains were unhooked to go different directions. then onto Grindelwald. 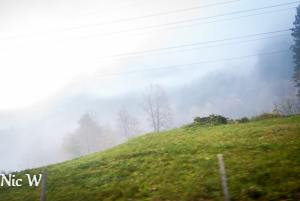 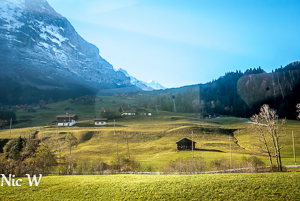 Grindelwald is full of chocolate box houses and backed by sheer cliffs which were covered in ice and snow. It was pretty impressive. We decided to stop here and let Astrid have a leg stretch and a play. We wandered the shops while waiting for the next train and she had a fun play at a park with some pretty nice views. 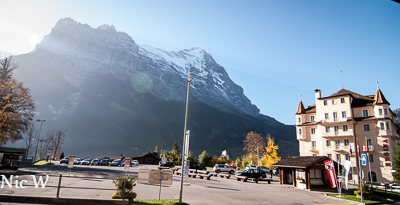 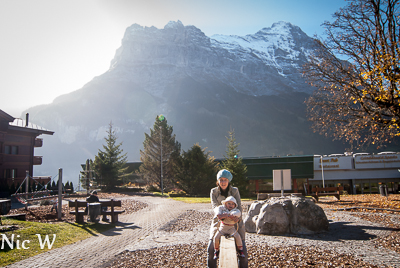 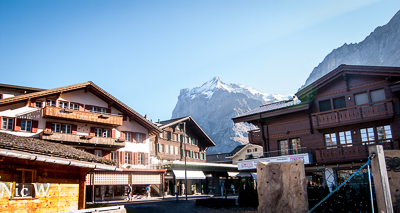 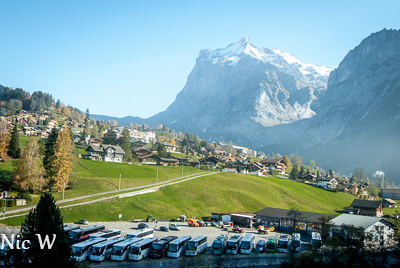 The next leg was to Kleine Scheidegg and involved 30% gradients as we climbed to 2061m. We were now surrounded by snowy cliffs and steep valleys. The train moved pretty slowly and it took 33 mins to get to Kleine Scheidegg. We passed through lots of stations that operate as ski run points during the season. They are a few weeks from the ski season starting and most places are deserted except for the tourists going up the Jungfrau and lots of walkers out doing the scenic trails. 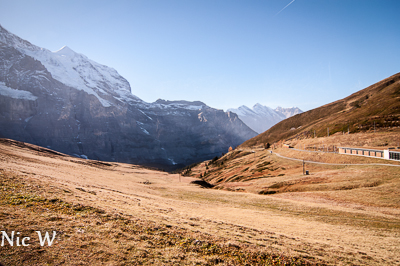 We changed trains at Kleine Scheidegg and we didn’t have a break here as it was pretty busy with trains coming in thick and fast and we wanted to get up to Jungfrau Joch for lunch.  The next section of train was almost entirely in tunnels, so not too much to see except at the viewing stations from within the tunnel. Eigerwand (2865m) and Eismeer (3160m) stations which had glass platforms for viewing and allowed the downward trains to past while you got some good shots. 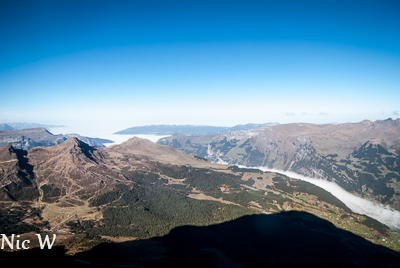 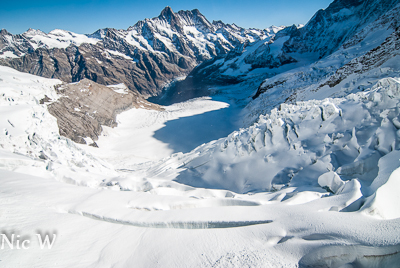 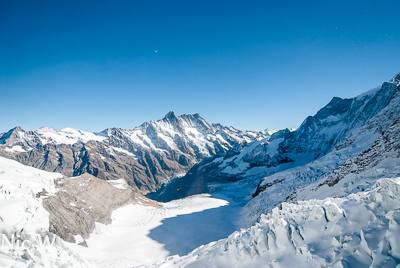 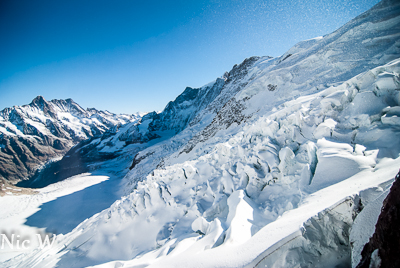 It was during this section of the trip that Astrid lost the plot. She was really tired and got a bit hysterical but Anto finally got her to sleep with several million verses of ‘soft kitty’ so she at least got some rest. We finally got to Jungfrau Joch (3454m) and it was indeed cold and very high. We headed into the restaurant building with about a million other tourists. It was right on 1pm and a bad time to be arriving. We decided to give the bistro a miss as it was packed and went up the restaurant. It was expected to be expensive but turned out to not be any more so than any other Swiss meal and was really nice food. The views were spectacular over the Jungfrau and were lovely to watch while we ate. I had a leek soup with a ricotta ravioli through it and some cheese, it sounds weird but was lovely. Anto had a meat and cheese platter that was really good. Astrid had a bit of everything and a tonne of bread and butter and most of our hot chocolate.

During lunch we realised we were feeling a bit sick and lightheaded from the altitude. Astrid didn’t seem bothered but Anto felt quite blah.  We suited up and wandered through the long, dark and cold tunnels out onto the snow face.  There wasn’t a huge area you were allowed to play in but Astrid loved the snow and thought it was the best fun ever to lay in it, roll in it and touch it. She kept taking her mittens off and realising it was cold and not knowing why. We think a trip to the snow might be in order for next winter! Incidentally it was about 1 degree while we were up there so not actually that cold, at least not compared to a Canberra winter. We didn’t even put half our warm clothes on. 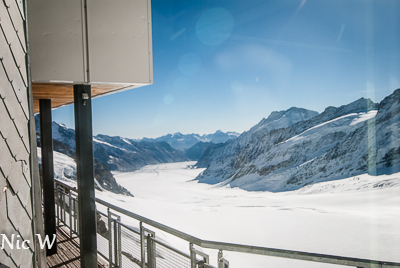 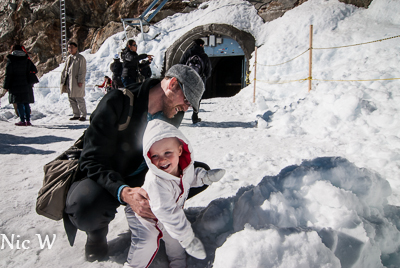 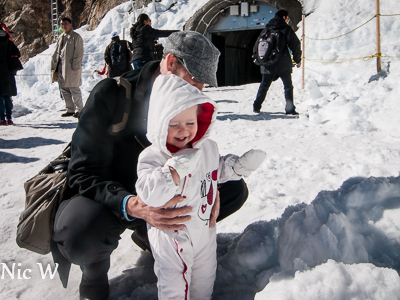 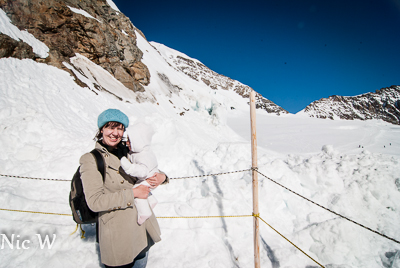 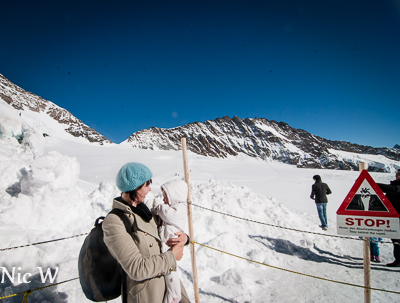 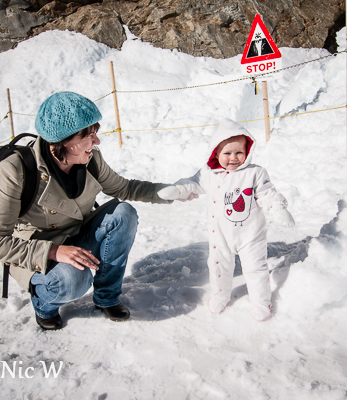 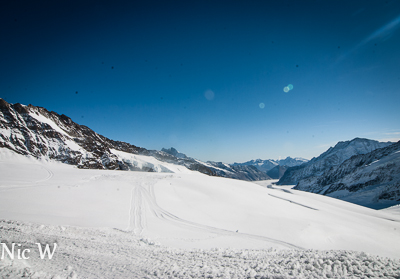 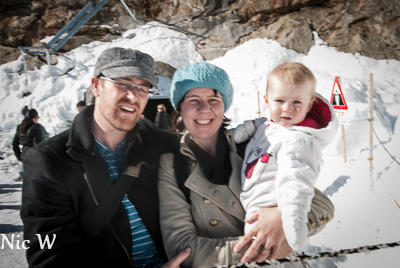 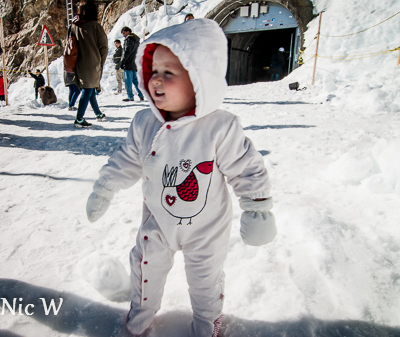 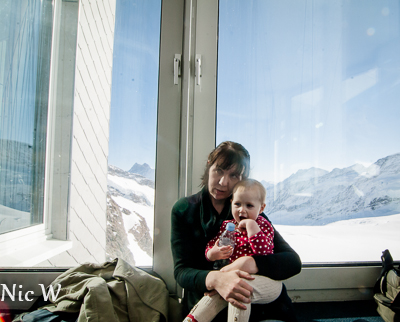 As it was quite bright and cold and we didn’t want Astrid running around too much in the altitude we took some photos and went back in for the next train down. It’s at least 2.5 hours back so it had already been a long day.  The trains back were busy and we headed down to Kleine Scheidegg much quicker than we went up.  We decided to change here to a train to Lauterbrunnen and go back through some different towns. This was another packed train. Luckily the Japanese tourists that were stuck with us thought Astrid was hilarious and spent most of the hour long ride posing for photos with her and picking up all the things she was throwing at them.  We were grateful they were so good humoured about it. They still wanted photos when we got off the train, and took video, so she is probably on all of their facebook pages by now! 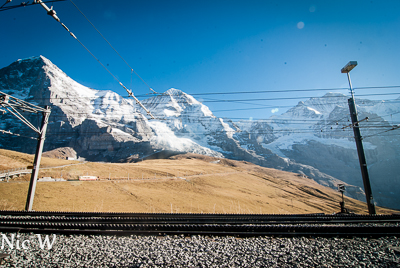 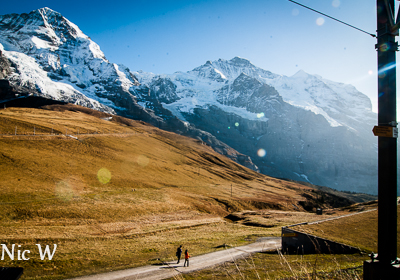 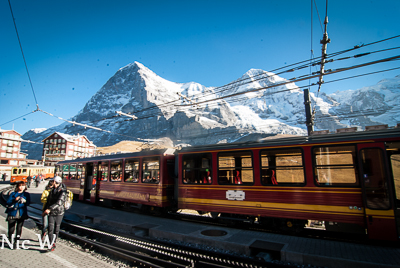 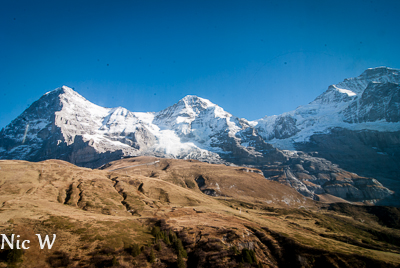 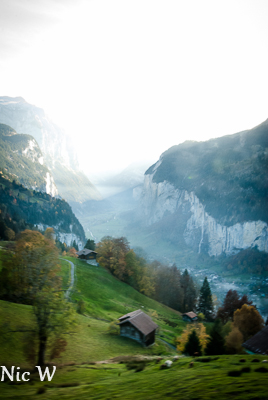 Lauterbrunnen is another beautiful ski town and if we weren’t so tired and wanting to get back to the hotel we wouldn’t have minded exploring.  You could spend days wandering through all the towns and walking some of the trails. It’s a shame we only had one day. There were plenty of towns we didn’t get to see at all.

We finally got back to Interlaken at about 5.30 after another 2 shortish train rides. Astrid was over it by this stage so we took her back to the hotel room for a break while Anto went and fetched some supplies. She managed to fall asleep on the bed and it was a shame to wake her for dinner. We had planned on some Cheese fondue but everyone else obviously had the same idea as the place we had wanted to go to couldn’t fit us in until 8.30. Thinking that wasn’t a good idea we got some Indian instead and got Astrid off to sleep after her big day of trains and snow!