Sunday the 2nd of June was a very cold and wet day in Canberra.  A very excited Astrid woke up and tore around the house like a maniac, dancing excitedly about going to the airport and Fiji! In the pouring rain, off to the airport we headed.

Since we had some serious luggage restrictions due to one of our connecting flights being on a very small plane we had to pack light.  With the dive gear and taking out the weight of our 2 bags we only had 10kg to split between the 3 of us so I’d tried not to pack a heap of things we weren’t likely to need, like jumpers!  I had dressed Astrid in a few layers so she wouldn’t freeze but I was braving the elements in shorts and a t-shirt.  This attire looked rather ridiculous given the weather 🙂

The flight to Sydney was fairly uneventful and we landed on time and went to make our way over to the International terminal.  This is where our lack of jumpers became a problem. Even Sydney was cold, and very, very wet and windy. The trip outside to the transfer bus was rather brisk.  Anto got Astrid to keep him warm in the ergo but I just had to brave the elements.

Once inside we got through customs and immigration in a fairly timely manner and managed to get some duty free shopping done before heading to Qantas club for some lunch and relaxation.  Astrid was quite a fan of the gelato in the International Qantas club (we had spied this on our trip to Europe last year but had run out of time to have any). This time we had time to kill so had plenty of time to fill our tummies and let Astrid have a run around.

After a very long wait to get on the ageing 747, that was packed to the brim, we got to our seats and settled in for the 4 hour trip to Nadi.  It was a bit squishy with someone next to us and an almost 2 year old on our lap but we survived. A very tired Astrid was refusing to sleep but we kept her amused with back to back episodes of Playschool on our laptop. She isn’t normally allowed to watch 5 episodes in a row of anything, so she thought all her Christmases had come at once. The American lady next to us probably couldn’t figure out what this strange show was that the toddler was watching but it beat the screaming that all the other kids on the plane were participating in.  There were lots of kids on that flight and all of the seemed to be screaming simultaneously with tons of parents pacing the aisles. Luckily Astrid is pretty good at flying these days and we barely heard a peep out of her for the 4 hours aside from requests for food and drink.

It was a pretty boring flight, and lucky I had eaten prior to getting on because as usual my vegetarian meal was forgotten and I got no food.  It was hardly the luxury we experienced on the way back from London in business class but for 4 hours it was fine.

We arrived in Nadi and got off the plane and commenced waiting around to clear immigration. Despite being almost first off the plane there seemed to be people who were happy to push in all over the shop and all sorts of line skipping was going on, some sanctioned and some not.  We were standing with a bunch of other parents with small children and all the kids were getting pretty weary as it was dinner/bed time.  We also got the slowest immigration official in the history of the world. Every other line was moving at 3 times the pace.  This is the bit of travel I hate but we had to remember we were now on Fiji time and try and be patient.  We eventually got through customs, found our bags and headed out to find our hotel transfer.

Due to a very early flight out the next morning we were staying at the Raffles Gateway Hotel, which was about 500m from the airport. We could have walked no problems but we waited around for the bus as we were tired and hot.  After what seemed like forever we were deposited at the hotel and met my parents who had flown in very early that morning and were eagerly awaiting Astrid’s arrival. At this point Astrid got her second (or third) wind and was back to running around like a mad thing.  It was now after 8.30pm local time but we had checked in and had a table waiting for us for dinner.

We all tucked into some yummy curries and/or seafood and despite feeling like we could sit by the pool for awhile it was almost 10pm and we had to be up very early for the next flight. We finally convinced Astrid that she would see Granny and Gramps again in the morning and got her off to sleep and tried to get a few hours in before our wake up call.

At about 3am Astrid decided sleep was no longer needed and wanted out of her cot and into her bed. We had to be up at 5am (3am Australian) anyway so we were all a bit tired with the lack of sleep.  We had no issues being ready on time for our transfer back to the airport given we had been awake for hours and once at the airport tried to locate something edible for at least the smallest person of our travel party.  After some questionable but caffeinated coffee and a toasted sandwich for Astrid we went to the departure lounge for our next flight. 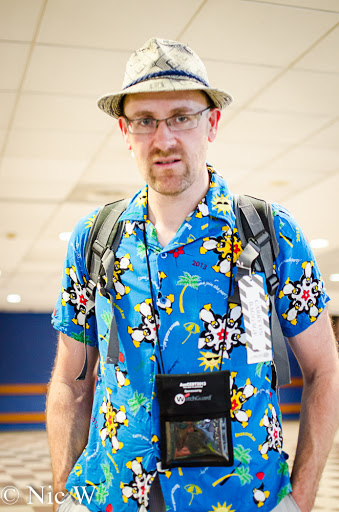 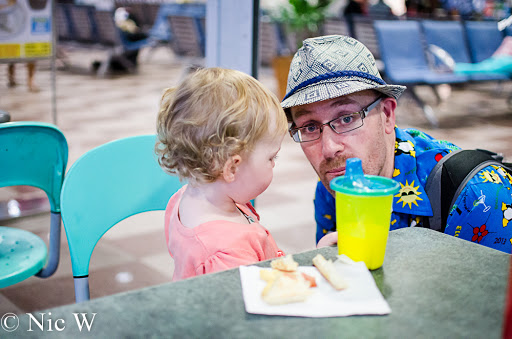 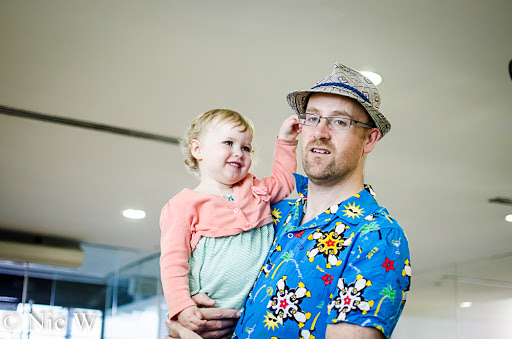 Anto and Astrid in ‘holiday mode’. Anto is allowed to wear silly shirts when on holidays! 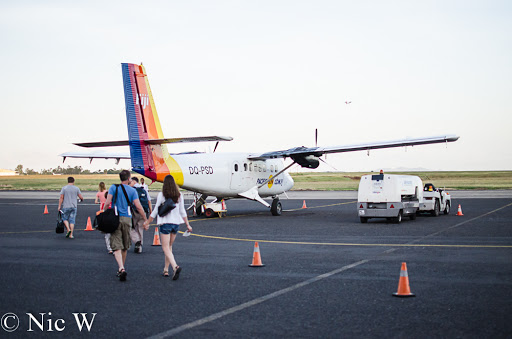 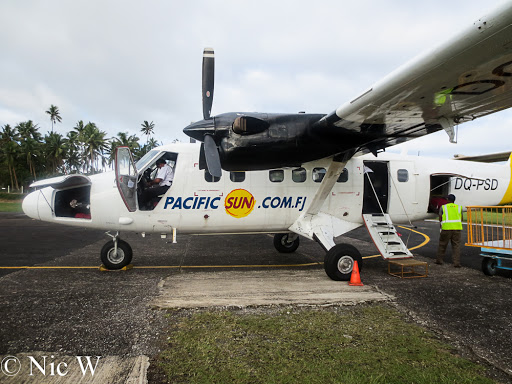 Our huge and roomy plane!
After being duly weighed along with our luggage…….. Anyone who has done a flight on a small plane may have experienced the joy of having yourself weighed (along with your hand luggage and small child) to be assigned a seat.  It’s great having the whole airport know how much you weigh!  We had the most ridiculous security screen ever (everyone set off the metal detector and had to be rescreened, even staff) and boarded our very small plane with the 6 other passengers.  Despite their being spare seats we couldn’t move Astrid around as there were only a couple of seats that weren’t near emergency exits and she had to stay where the weight had been allocated. The last time we did one of these small flights we didn’t have a toddler so the 1.5 hour flight, despite being very scenic was tedious as we tried to keep her entertained. We had assumed we would be seated near my parents but the were a few rows in front and Astrid wasn’t impressed about her lack of entertainment.

At any rate it’s always enjoyable getting such lovely views on these low level flights and the take offs and landings are always impressive.  We arrived at the very small Matei airport on the island of Taveuni just after 8.30am and were relieved to find our transfers waiting for us.  The man picking us up seemed to be confident we were his guests despite us trying to give him our names he just bundled us into waiting cars and told us we would be at the resort in a few minutes. We were under the impression it was a long drive to our resort so we were pleasantly surprised that we would be there soon.  Once at the resort we started to be a little confused as it didn’t ‘seem’ like the right place.  When we went to check in and they were shocked we had a child we were definitely suspicious as there had been lots of communication about us bringing a baby. It turns out we were at the wrong resort and it took quite awhile to get our actual transport to pick us up but we were eventually in the correct cars!  It turns out the guests who were supposed to be at that resort weren’t even on our flight.

Once our correct drivers had turned up (along with another couple from our flight) we set off, on the unfortunately long, trip to the other end of Taveuni.  It was a 1.5 hour trip in a 4wd on often very rough ground.  The roads seemed to get more rough, rocky and washed away as we went on.  We also stopped several times to pick up supplies for the resort as they are quite remote.  Luckily we had arranged for a car seat for Astrid as I wouldn’t have fancied her on my lap for that type of trip.  Despite it being bone shatteringly rough she somehow fell asleep and got a good 40 mins nap.

Eventually we arrived at the Paradise resort and it did seem worth the effort!  Here are a few pics of what awaited us:

While we were waiting for our rooms we all had welcome foot rubs, fruit platter and coconut juice. Astrid was quite a fan of her foot rub! Then it was time to tuck into some lunch and have a rest before an afternoon of exploring, relaxing and eating.

I’ll be posting more photos of our time at the Paradise resort in the next couple of days.