This week’s photo is from when we were in London.  I’ve just about caught up on all my photo album making, just one for Astrid’s second year, then it’s onto the Europe album. Can you tell I’ve been putting it off?  With about 5000-odd photos to go through and hundreds of pages of layouts it’s going to be a big job so I’ve been procrastinating by finishing and ordering all the other albums first.

The Christmas 2012 album, Astrid’s second birthday album, the Fiji 2013 album and our wedding album have all been finished in the last couple of months and are being ordered now.  Ok, so we got married 7 years ago, so the wedding album hasn’t been quick in the making but I’m almost up to date now and running out of reasons to delay making the Europe album.  It’s on the list of things that need to be finished before the baby arrives or else it might take 7 years to make as well!

I do sporadically dig through the Europe photos and I found this one today……  It was taken just before 4pm  as we were wandering around Westminster station and checking out  Big Ben, the Thames and the London Eye and it was already quite dark (it was December after all!).  I got lots of great photos that afternoon. Although I do wish I had of had my new camera rather than the trusty D80, which isn’t great at high (or even medium ISOs) which we needed to use a lot in Europe, since it was so dark all the time! It was actually that trip that made me decide I needed a newer camera 🙂 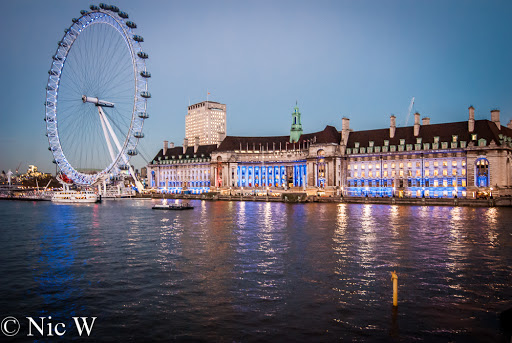