It’s Autumn in Canberra (not that you can tell from the temperatures) and the start of March means a whole heap of fun activities and events. One of our favourites is Enlighten, the annual festival runs for 10 nights towards the start of the month. The Capital’s most iconic buildings are lit up for a few hours a night with some amazing architectural projections, accompanied by live music, street performers and a very impressive noodle market.  It’s a fun (and free) activity and we have really enjoyed going the past few years.

Last year was the first year we took the kids along, and they had a ball.  Both Astrid and Soren were keen for a visit to this years festival. We actually decided to go along the first night, Friday March 3.  The weather forecast was pretty average, windy, a high chance of rain and a thunderstorm.  We hoped it might keep some people away, sadly that wasn’t the case but a Friday night at Enlighten is always going to be busy!

Unlike the previous year, where we took a picnic along, we decided to eat at home and just take some snacks to munch on during our wander among the projections.  Of course we had to do our usual cruise through the noodle markets upon arrival, and they smelt so good that we got well and truly suckered in with the smells and the street performers.  We decided that it was going to be hard to pass up all the food and got some gelato Messina to share for dessert. It was pretty hard to resist the fried gelato with caramelised banana and coconut! 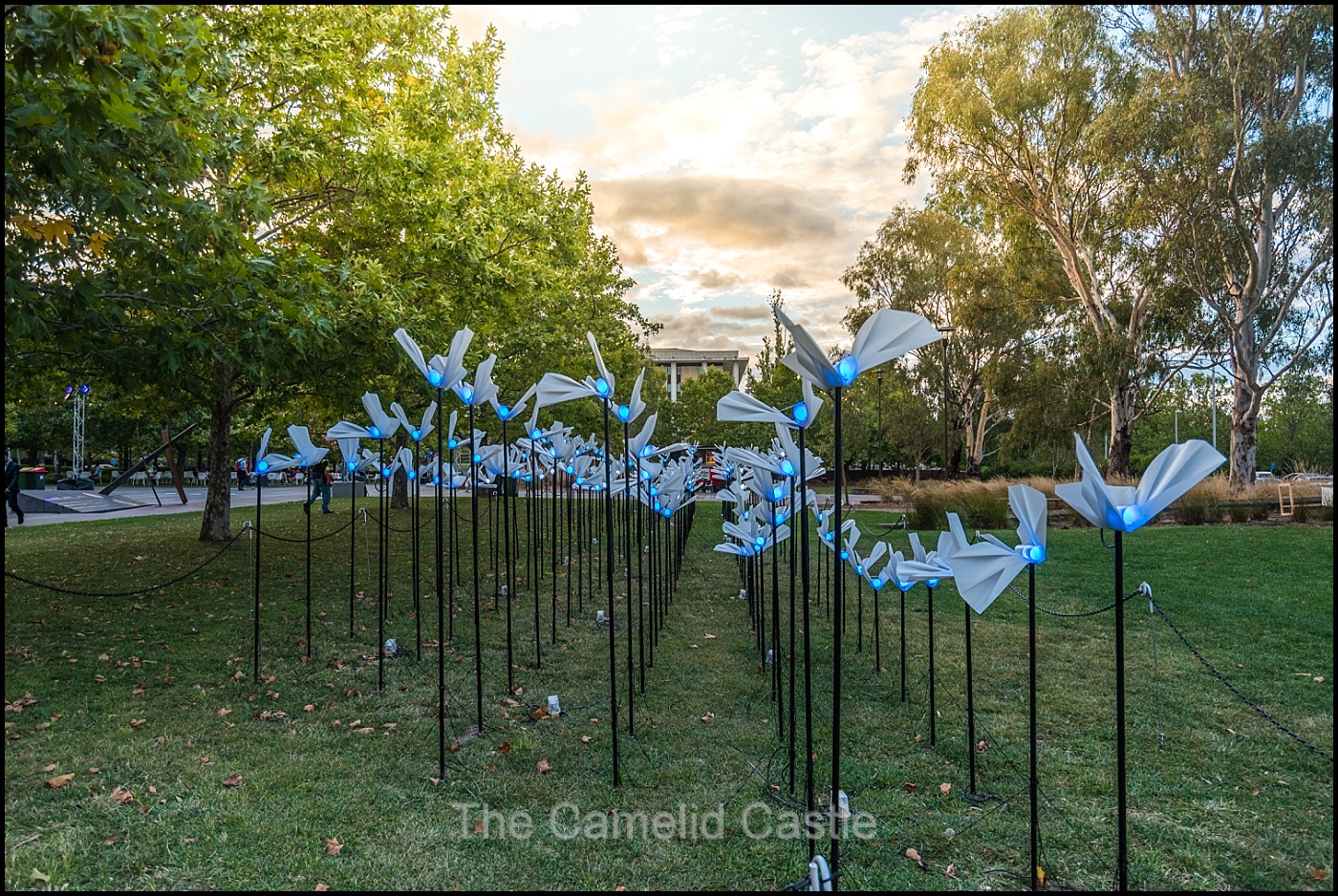 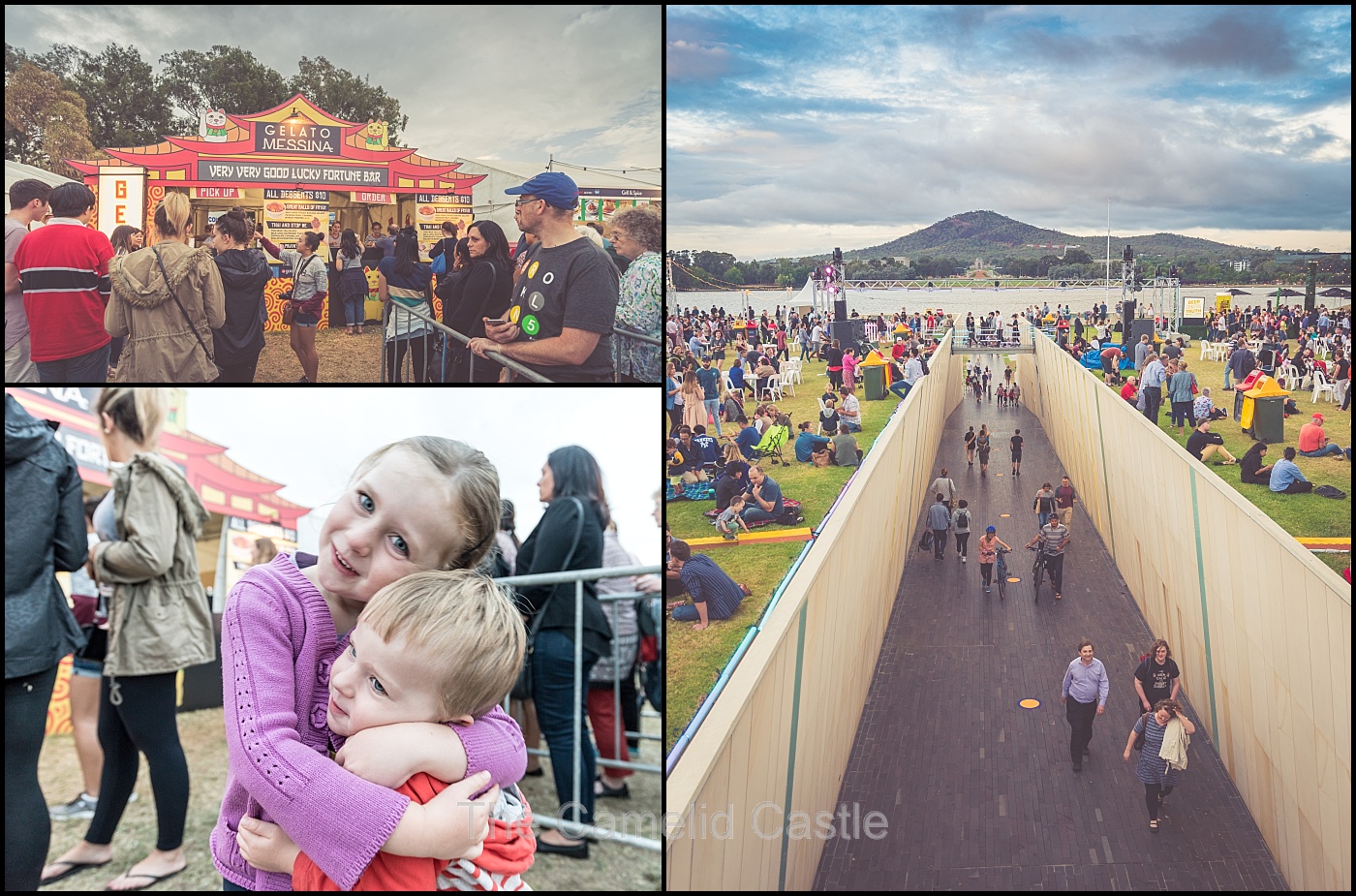 We headed down to the foreshore to eat our gelato and were treated to one spectacular sunset!  Canberra does March evenings well, and this was no exception. 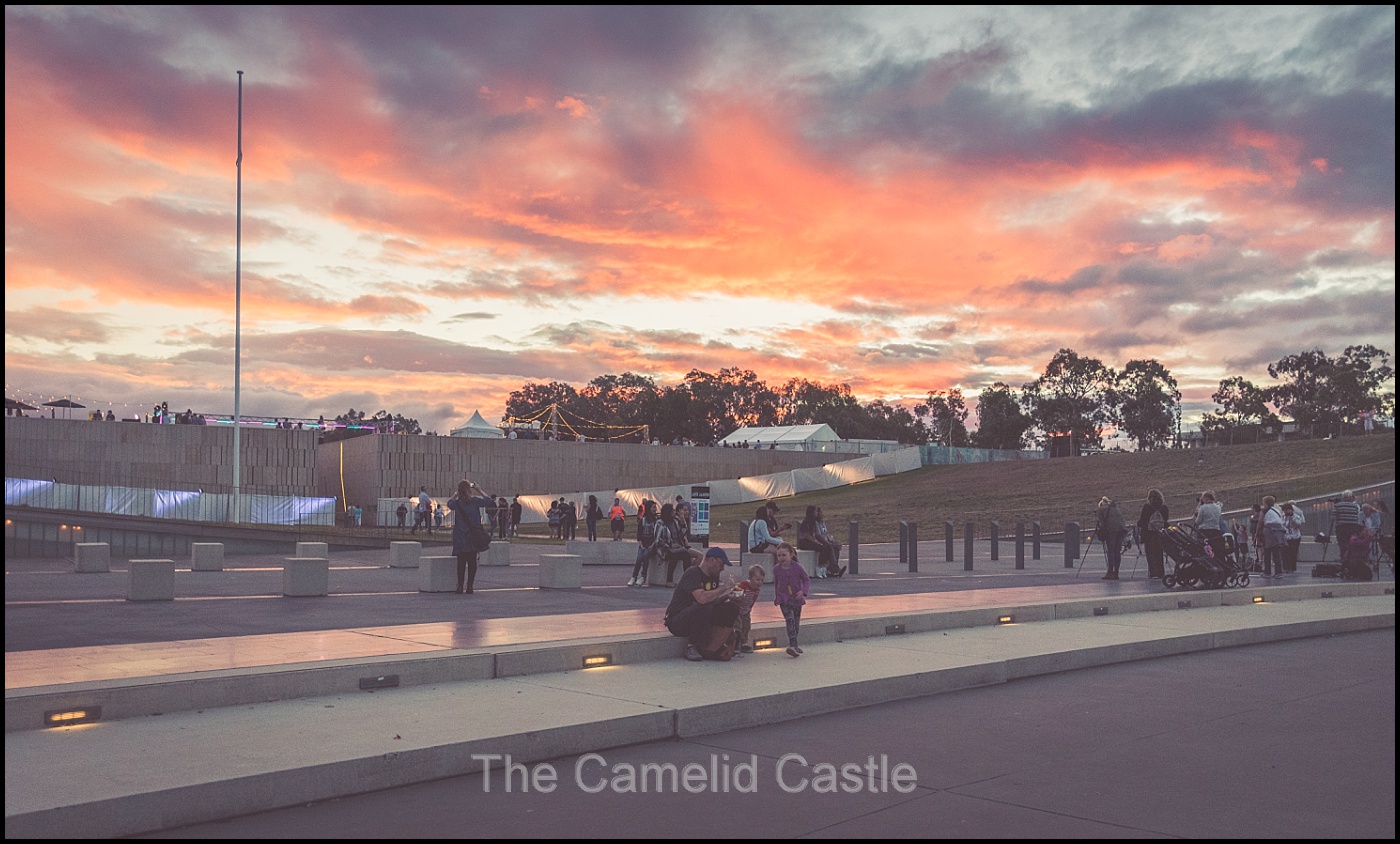 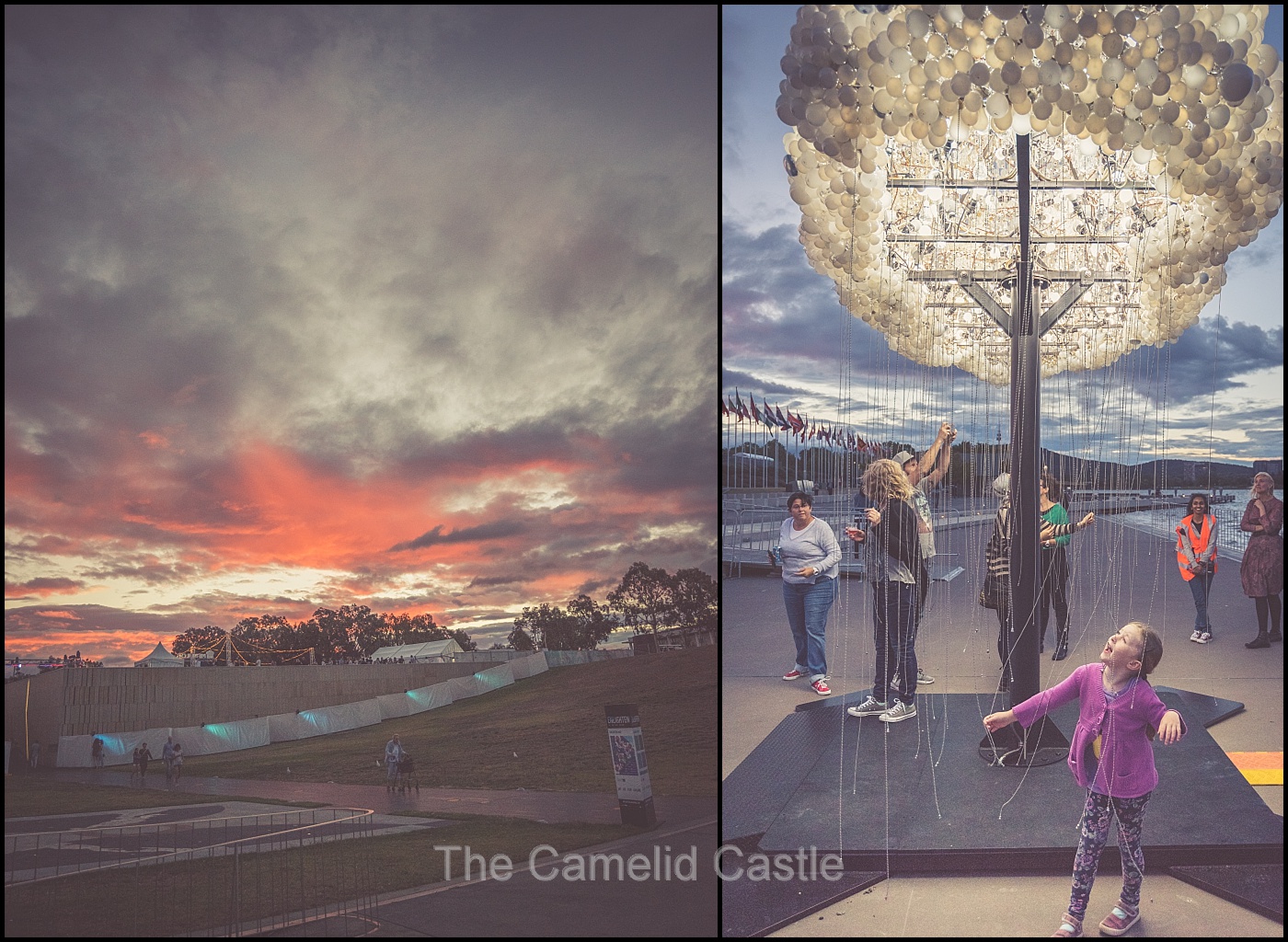 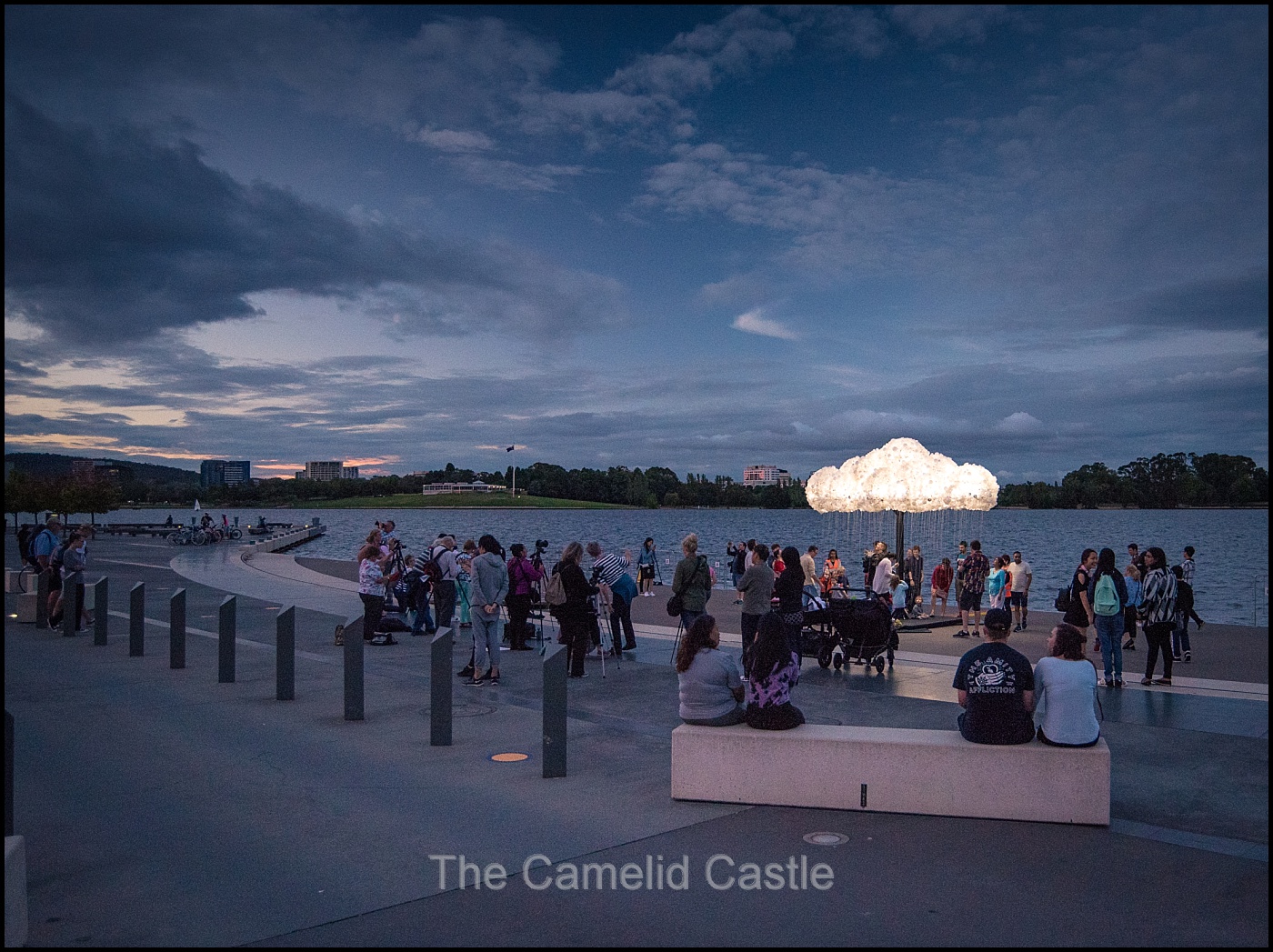 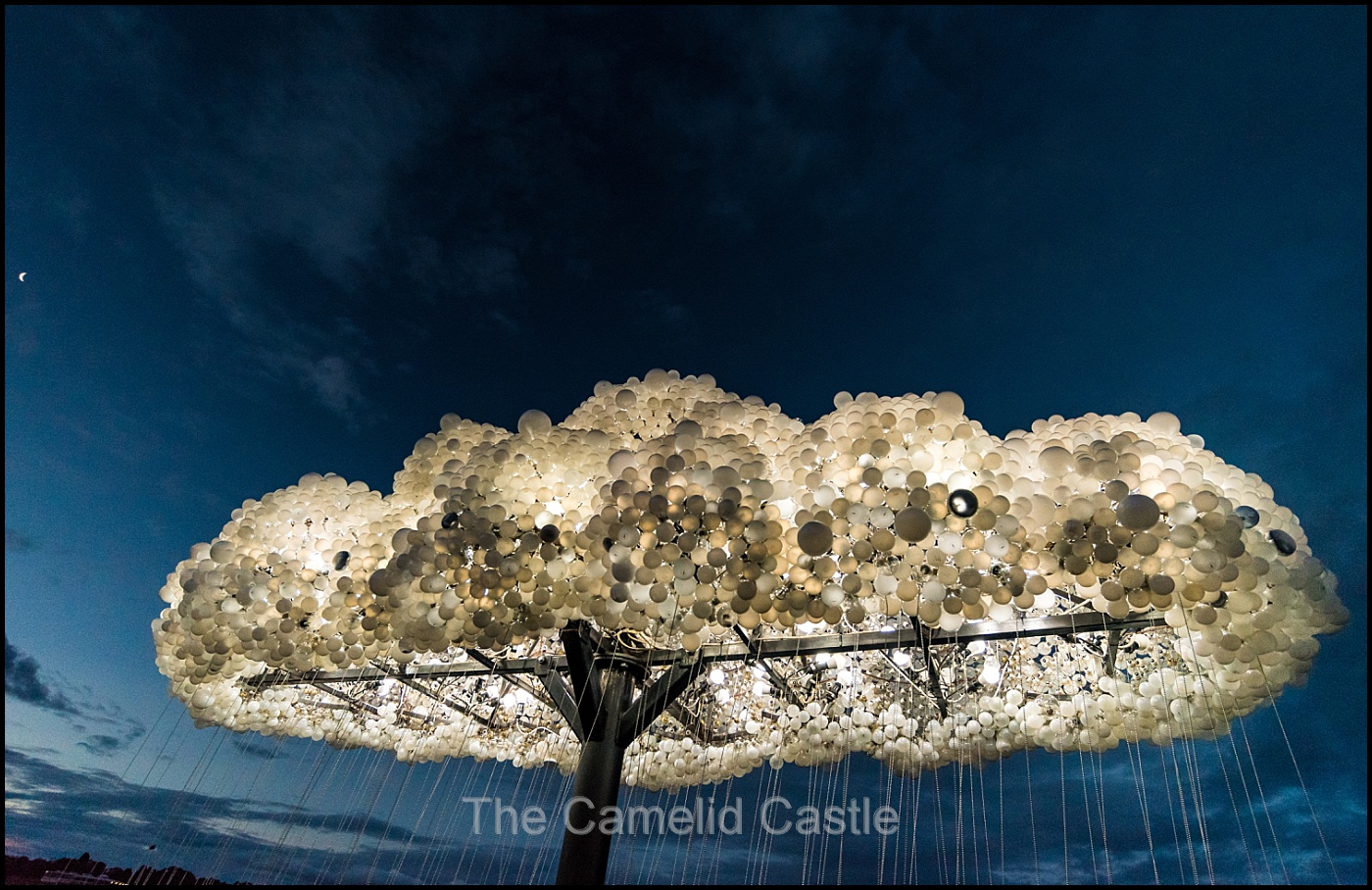 As 8pm approached we headed back up towards to noodle markets and decided to start doing our usual loop of the buildings, starting with the National Library.  On the way there we came across some giant fireflies which the kids adored, especially when one landed on Astrid’s head! 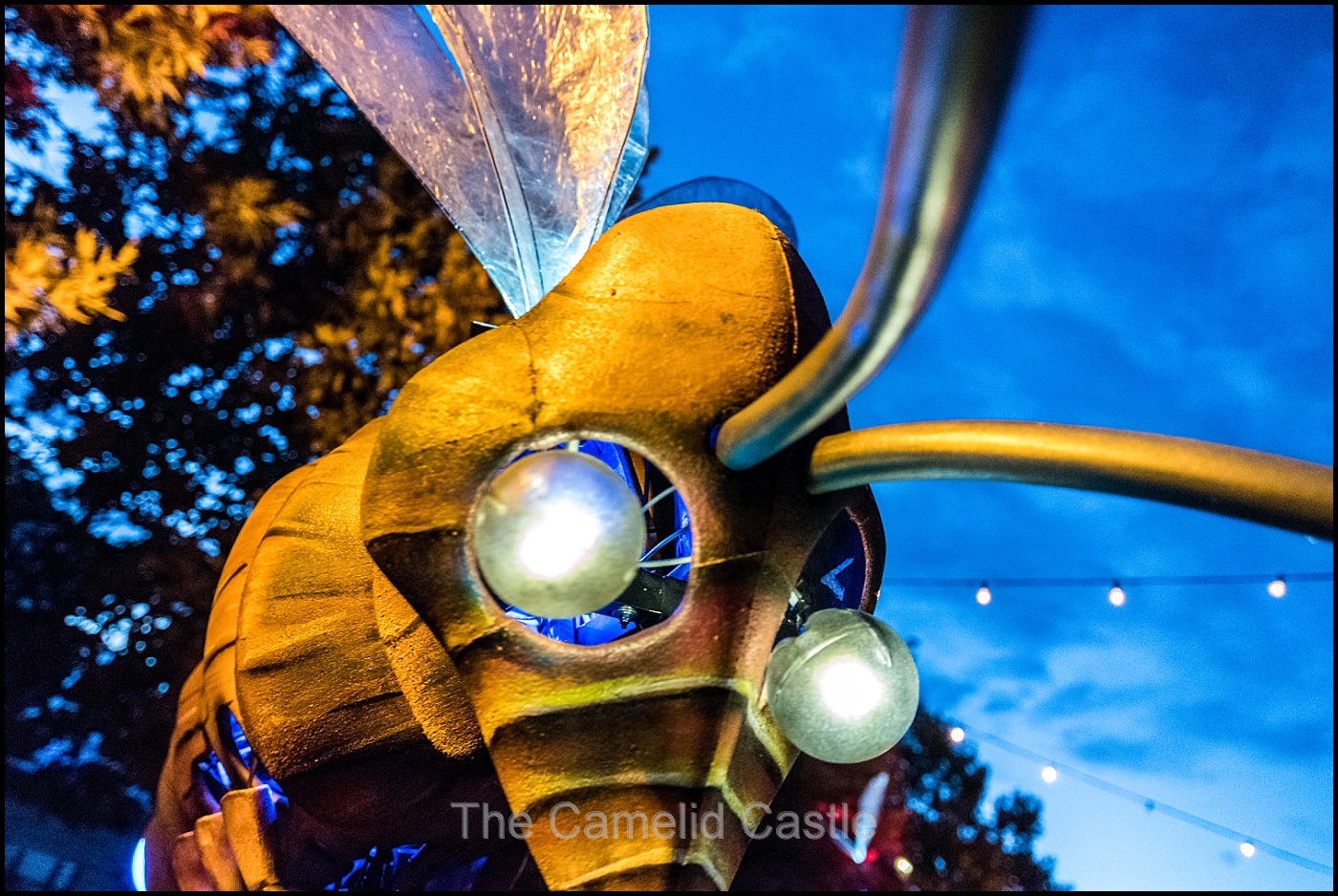 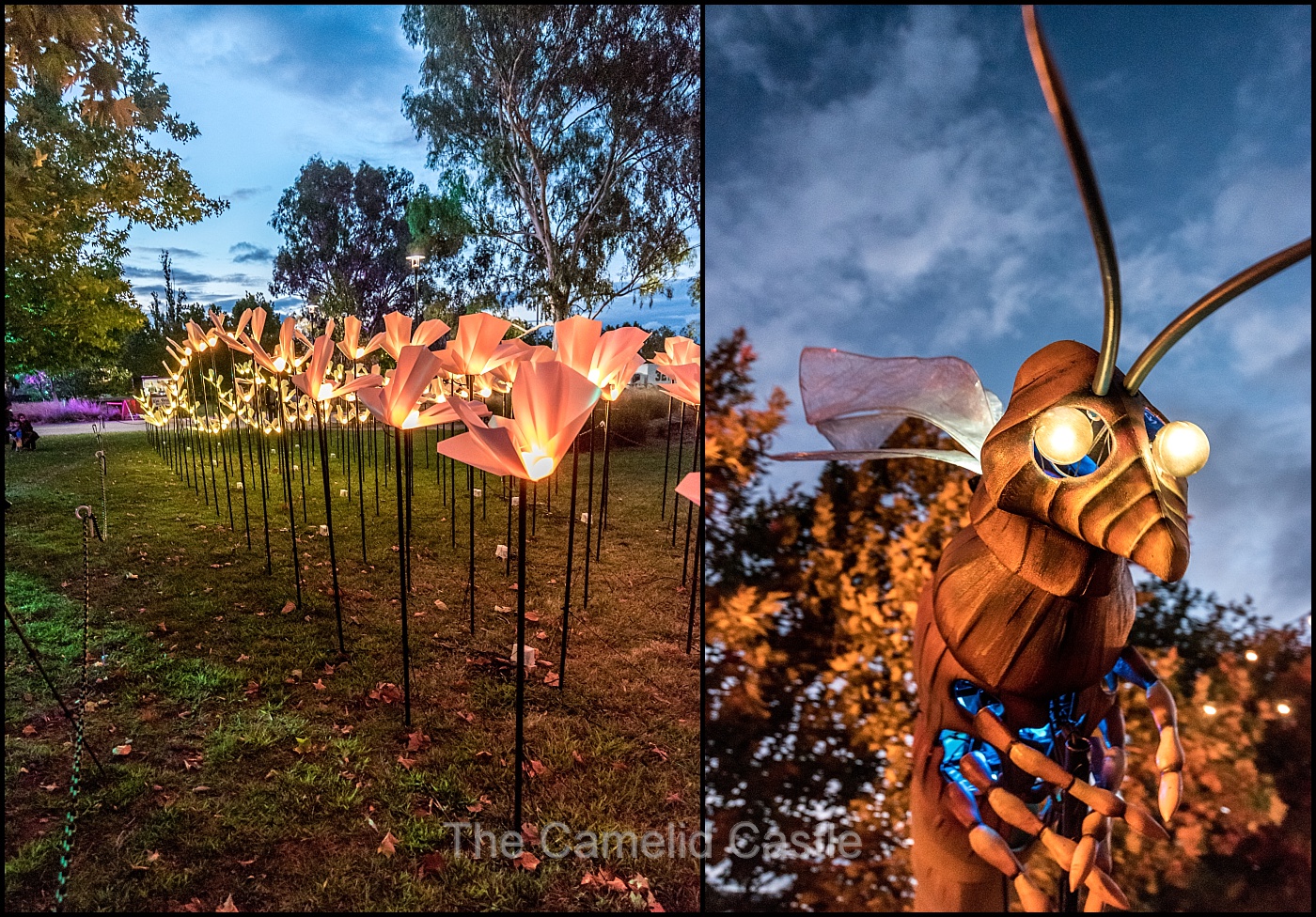 Full of gelato, and now munching on apples the kids were happy to wander with us to check out all the projections.  Taking photos of building projections at night involves a fair bit of standing around while we do long exposures with the camera on the tripod.  As most of the projections change or are moving, there is plenty to look at, and we all enjoy seeing the projections change.  As in previous years they were extremely well done and very clever.  We worked our way around the National Library, Questacon and then over to the National Portrait Gallery. The Portrait Gallery had one of the most popular projections that involved people having their photo taken in a photobooth and having it projected up onto the building.  At this point it was actively raining on us (quite hard) but the line for the photobooth was rather long! 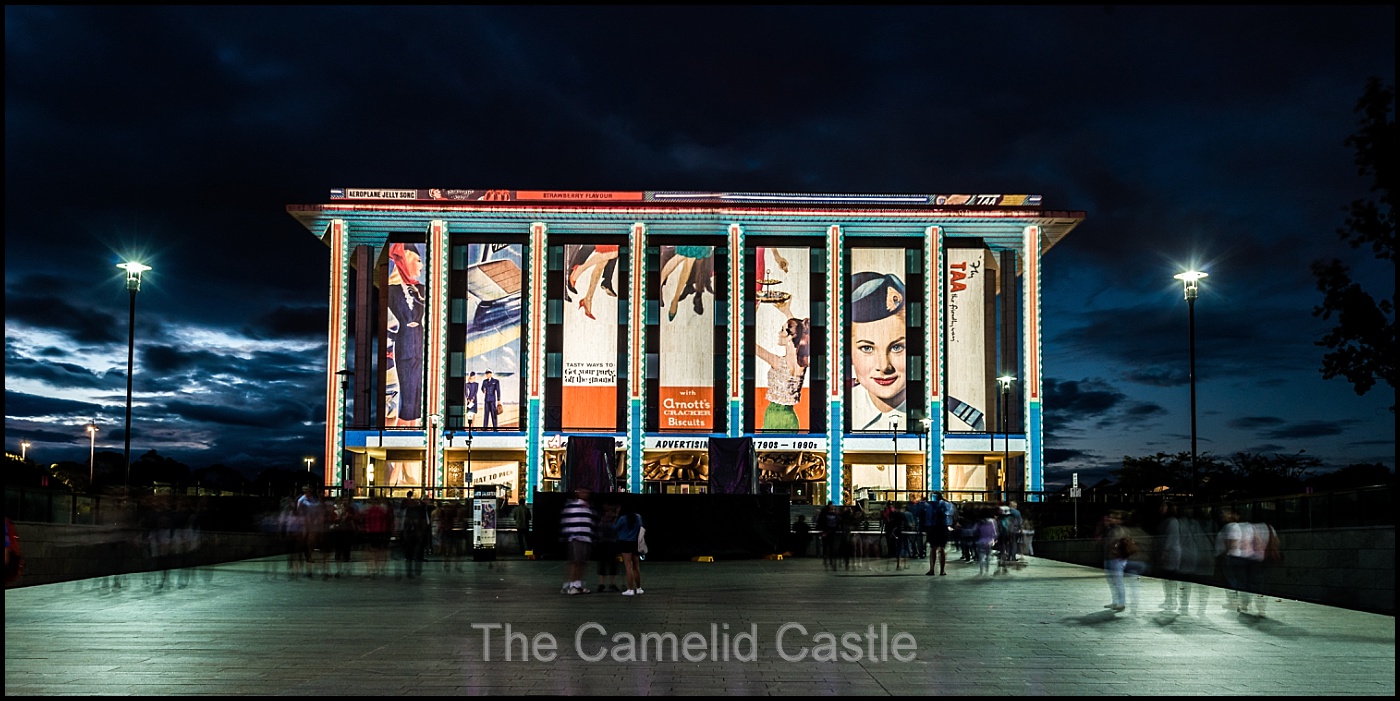 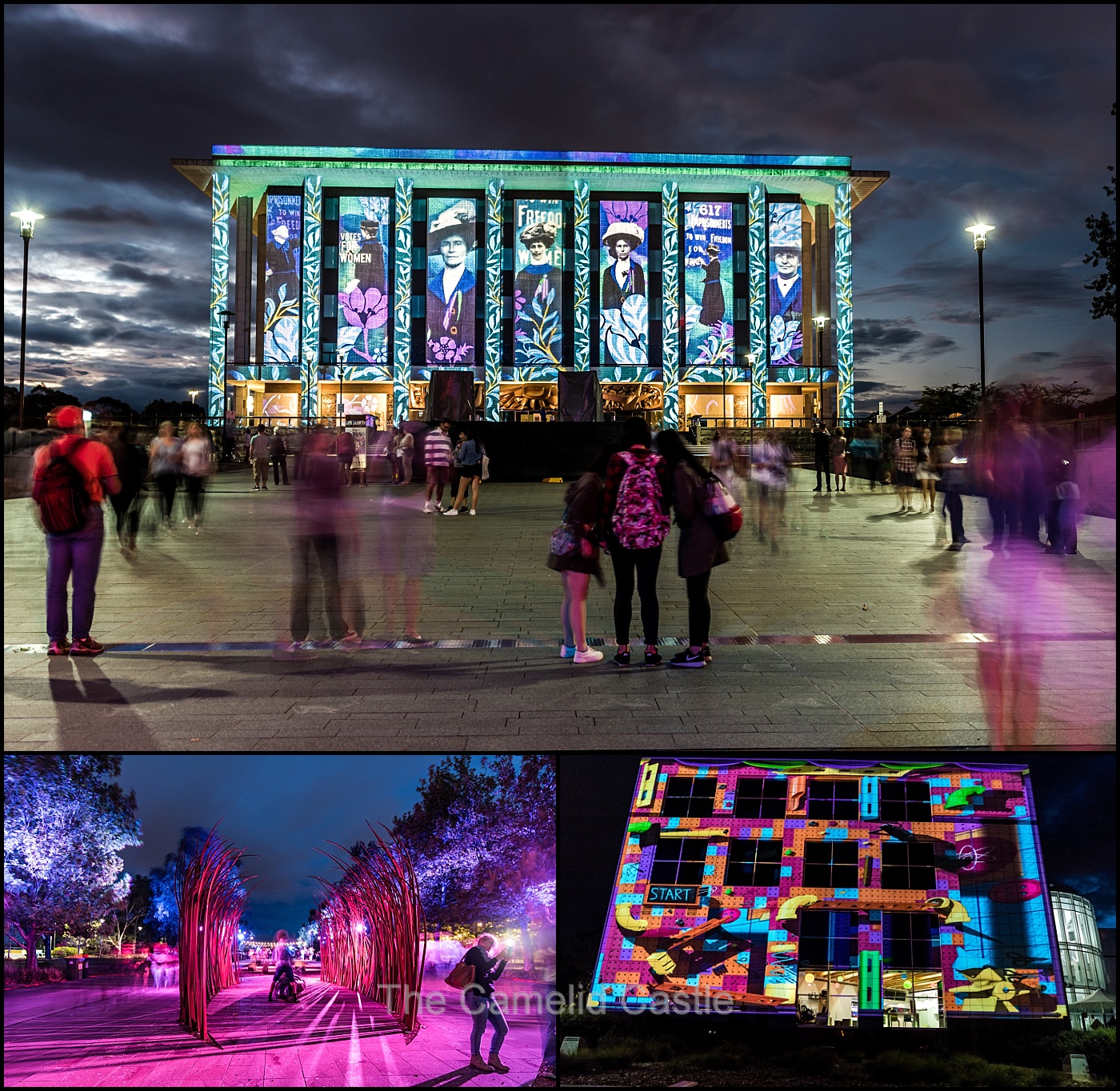 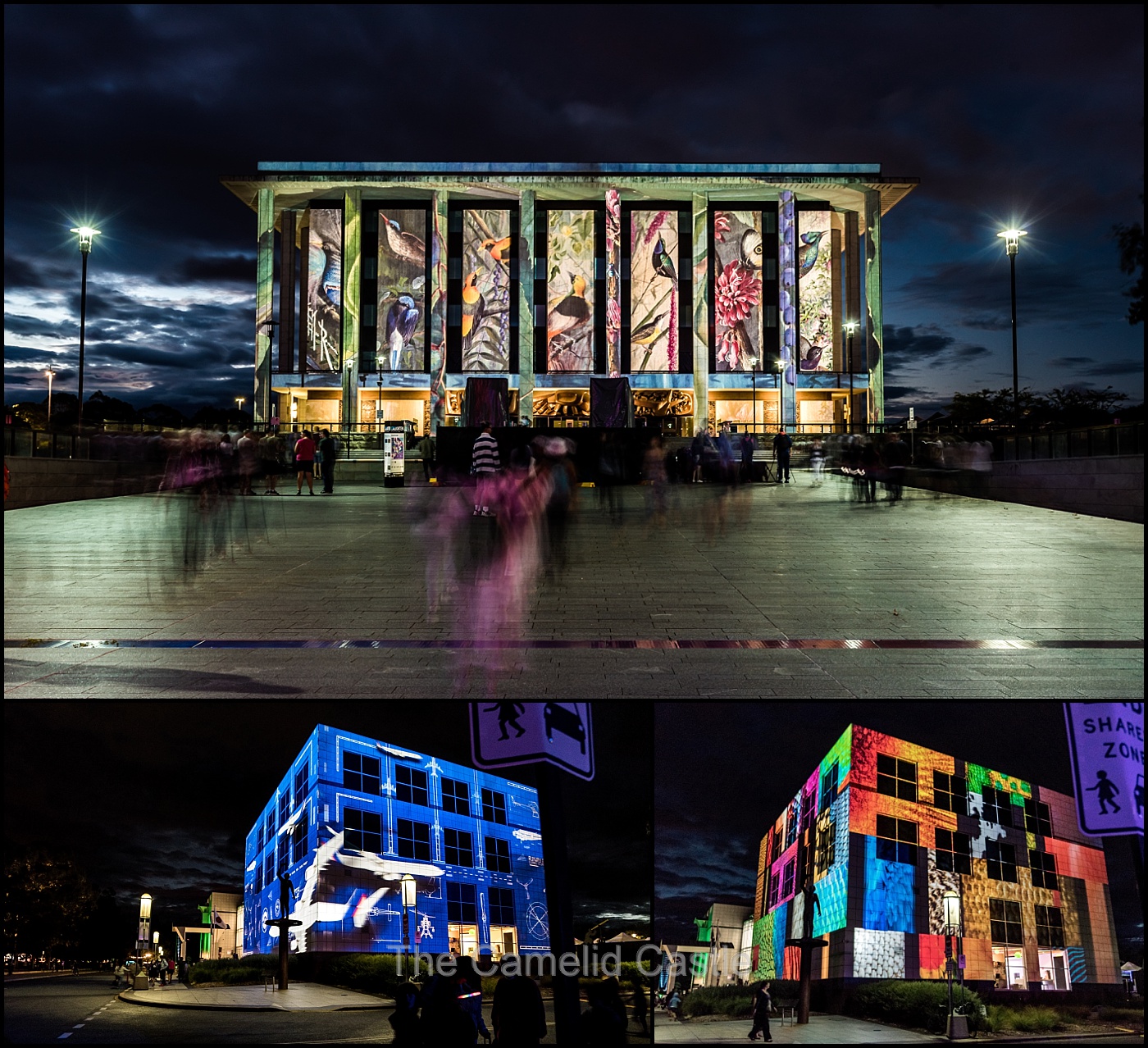 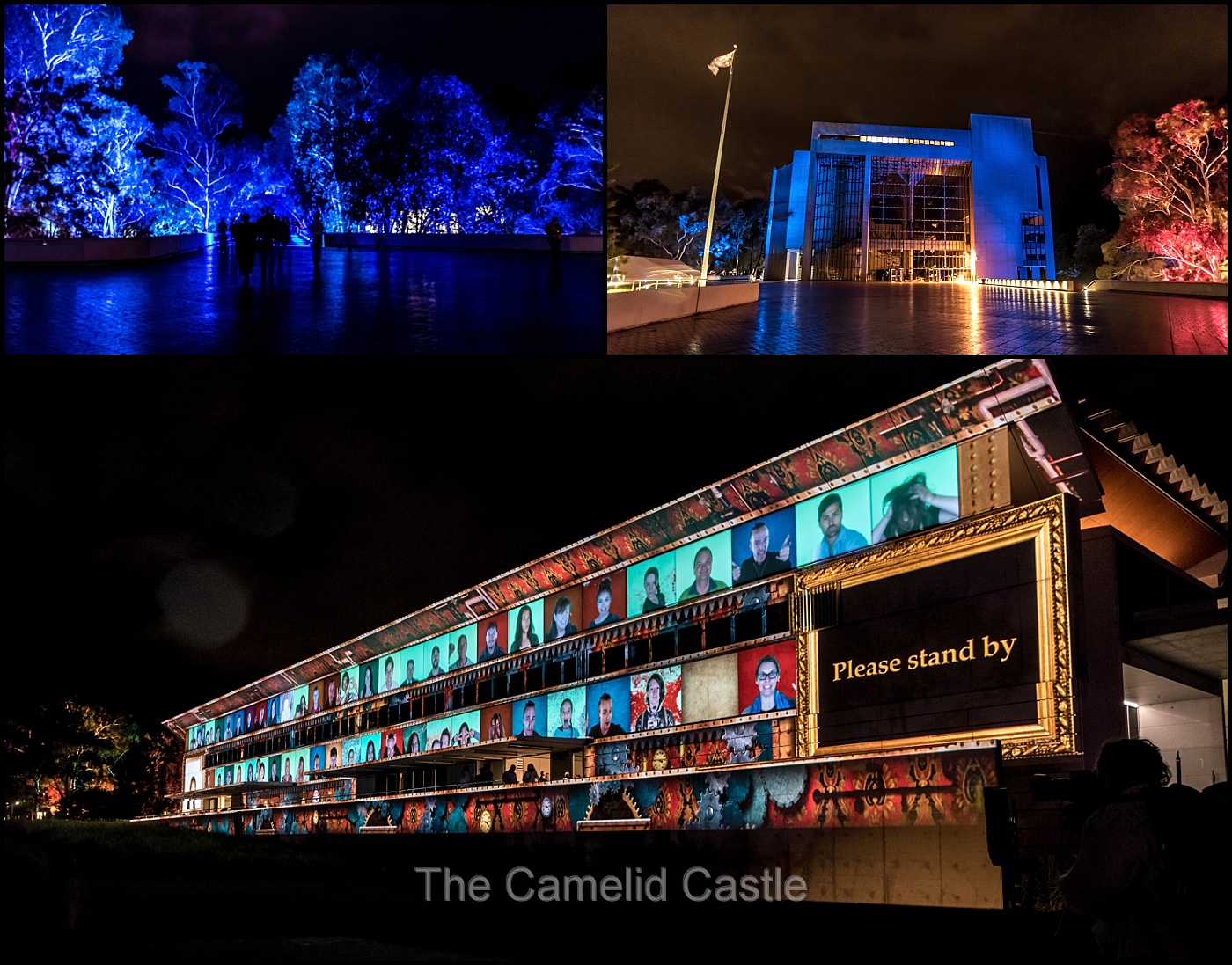 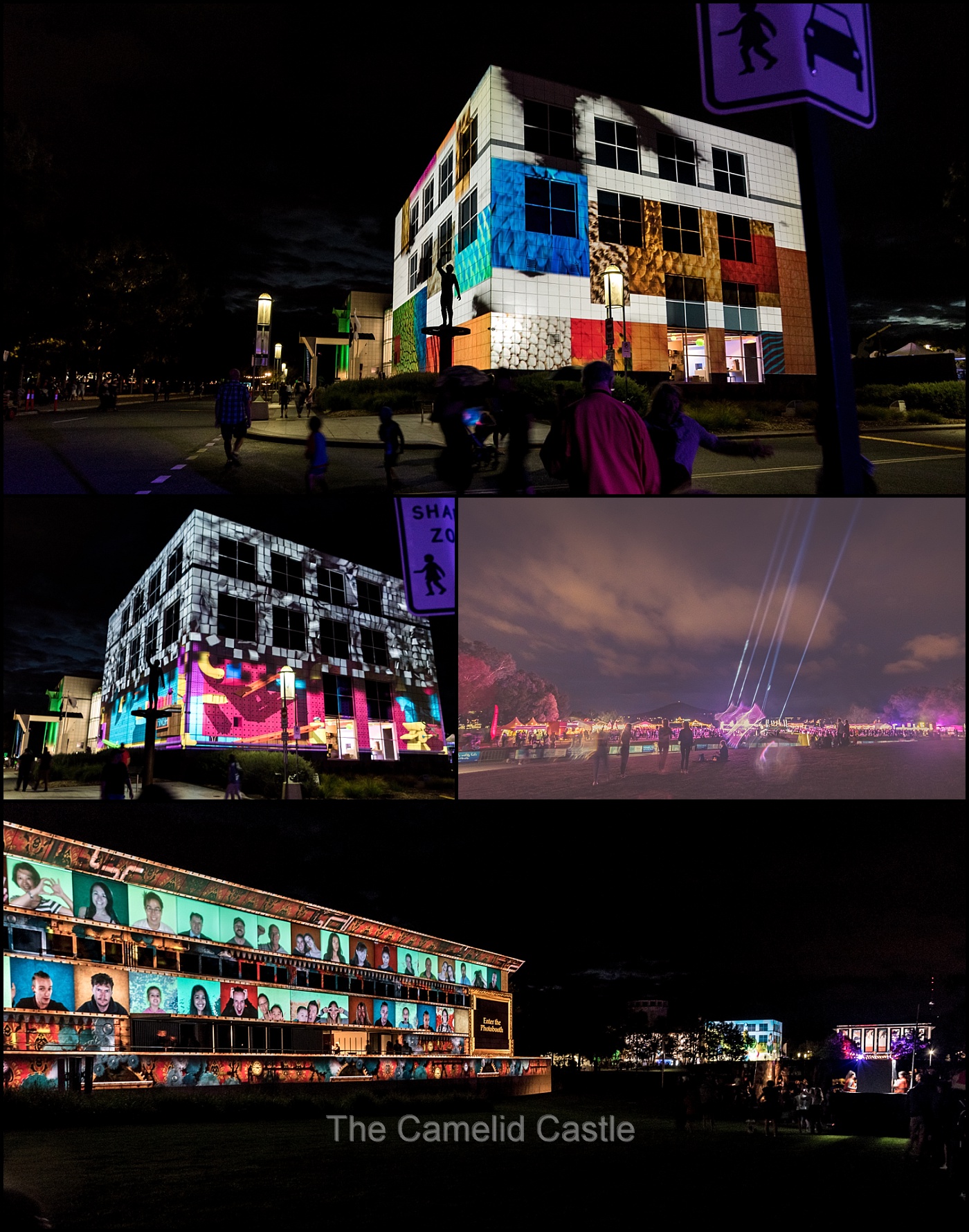 As we were now getting wet and cold and it was waaaaay past the kids bed time we did a quite whip around to Old Parliament House and also caught some more street performers, which had the kids enthralled. 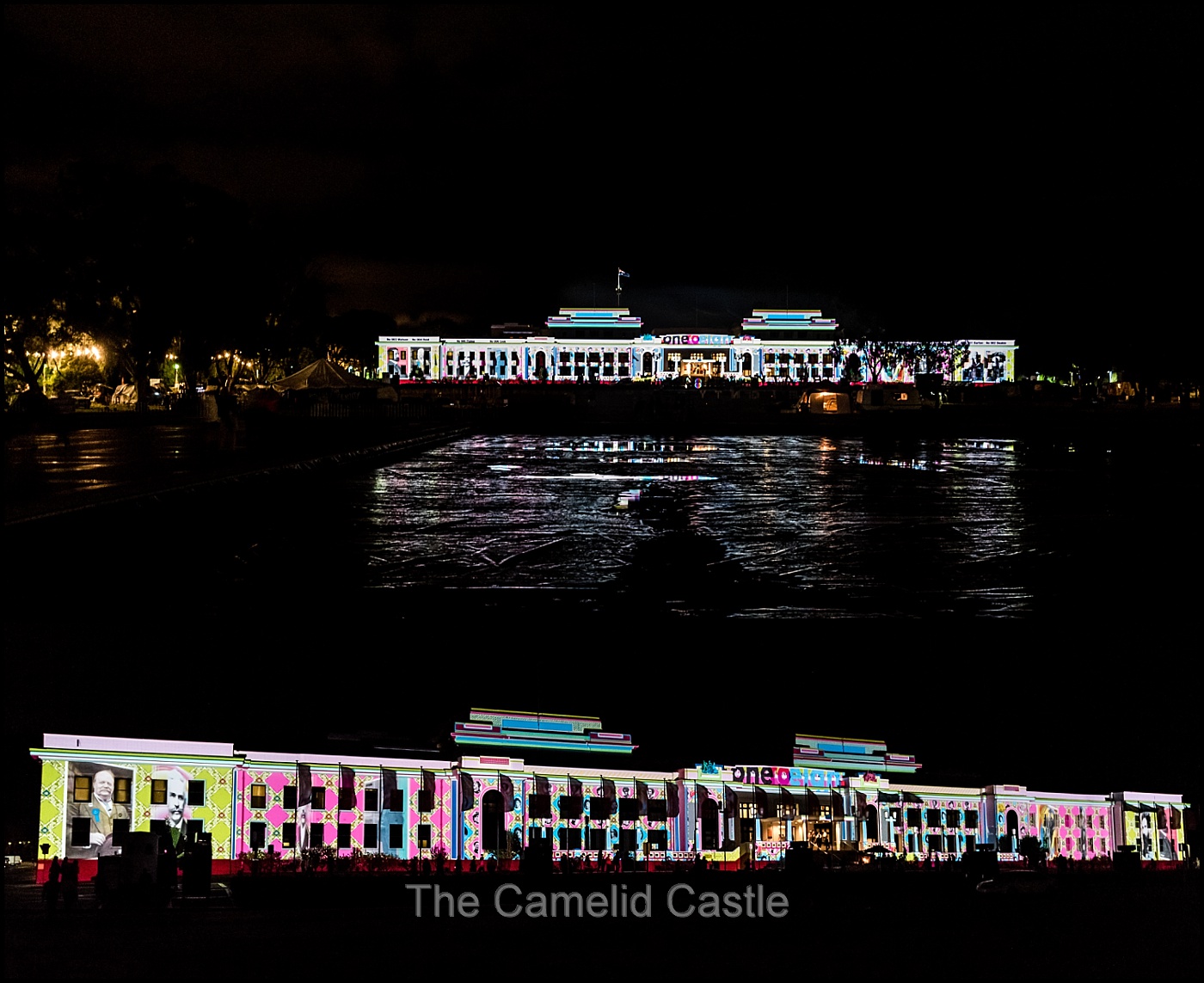 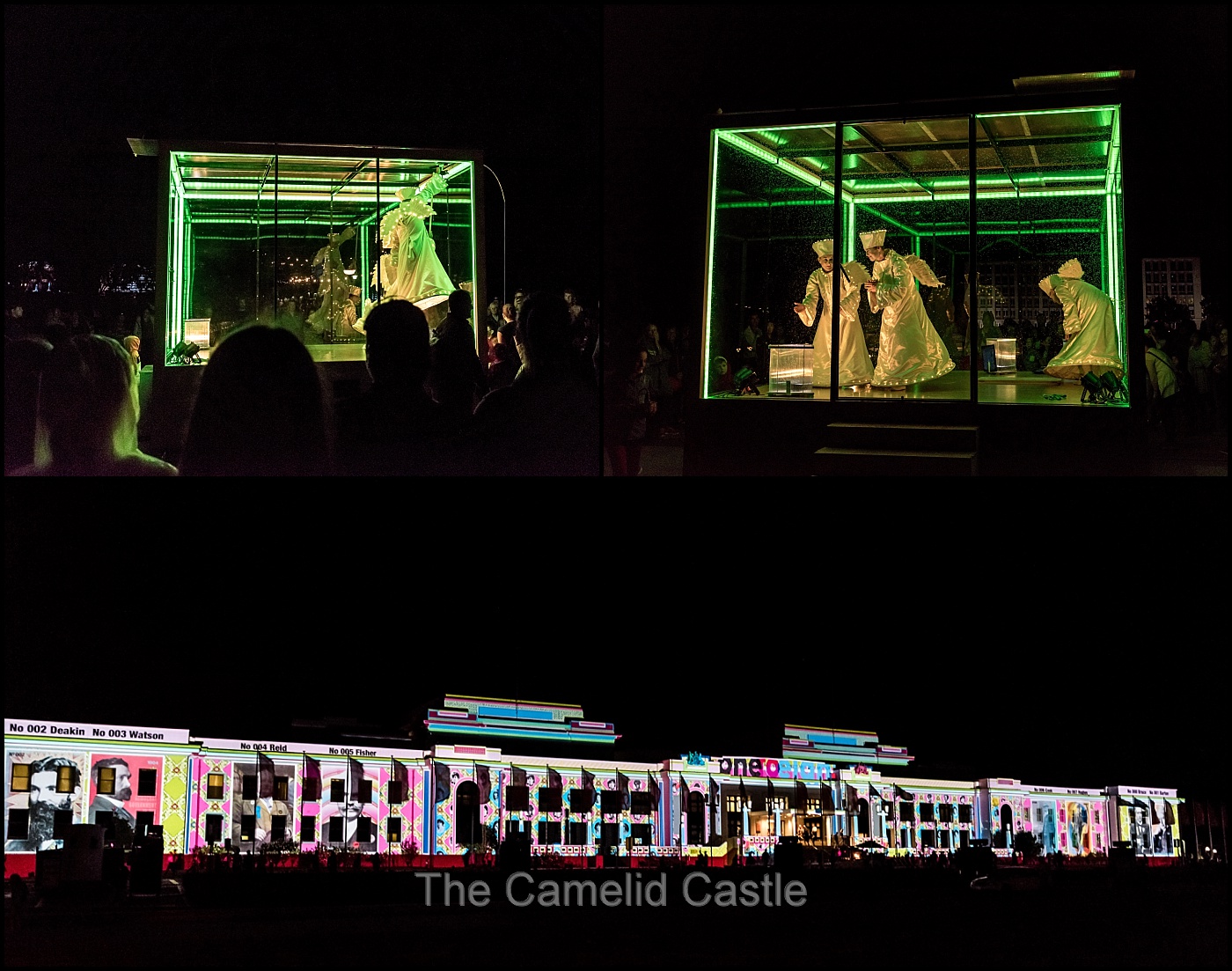 As usual it had gotten a bit late for the walk up to new Parliament House, so we just did a quick drive-by to check out those projections (no photos). Maybe next year I’ll actually get photos of them.  It ended up being a late night for the kids, but again a lot of fun, and definitely worth going to.  Enlighten is running until 12 March, so check it out if you are in Canberra!

If you liked this years photos you can see my photos from Enlighten 2015 and Enlighten 2016. The kids are already keen for Enlighten 2018, although another visit to the noodle markets before this Enlighten is done and dusted might be on the cards!