When we originally planned this trip for Anto’s 40th birthday, we thought it would be nice to book business class flights using our many frequent flyer points.  Unfortunately, we couldn’t get 4 business rewards seats together on any leg, except the one between Hong Kong and Kuala Lumpur. Sadly, this was the shortest leg of the trip, but at 2,500km or a bit under 4 hours on the plane, we figured it was worth indulging in business class for this leg.

Astrid has flown business class before, on our 2012 trip to Europe, but she wasn’t even 18 months so didn’t quite remember.  Both kids were beyond excited about the fact they were getting ‘lay down seats’ for this flight. Quite the flying veterans, business class was something new.  We were mostly hoping they slept as the flight didn’t even depart until 8pm!

After a big dinner, and much icecream and running around in the Cathay lounge in Hong Kong, it was time to board our flight to Kuala Lumpur. We were on an A330, and the business class cabin was set up with 4 seats across the plane in a 1-2-1 configuration. We had originally booked 2 rows with the 2 middle seats so we could have 1 adult with each child. Unfortunately the 2 middle seats have a wall divider between them, great for privacy, annoying when you have a small child. Luckily the cabin was mostly empty and the staff immediately gave us the whole front row so Anto and I could at least get to each child from across the aisle.  Dramas we don’t normally have to deal with in cattle-class!

The kids were rather excited to be sitting in their pods and served their warmed nuts and freshly prepared drinks. They had the staff well and truly at their beck and call and we were constantly hearing a flight attendant being asked to go and fetch something for ‘Miss Astrid’ or ‘Master Soren’.  Meanwhile Anto and I were seeing our chance of the over-tired kids sleeping any time soon, slipping away rapidly.  Luckily we had endless cocktails and warmed nuts to console us.

The curse of the late evening flight struck and it took what seemed like forever for the seat-belt sign to go off so that we could lay the kids seats down. They were desperately trying to keep their eyes open and were just waiting to lay down.  Just as the sign went off the crew jumped up and decided that the poor tired children needed dinner (aka second or third dinner).  We reluctantly  agreed, as we figured it was a losing battle since they had already spied the warmed breadrolls, cheese platter and dessert. They also scored their own fish straws!

Of course neither child really wanted to sleep, so after pretending to eat for a while, we eventually convinced them to lay down on their ‘seat-beds’ and sleep, and they were out for the rest of the flight….. 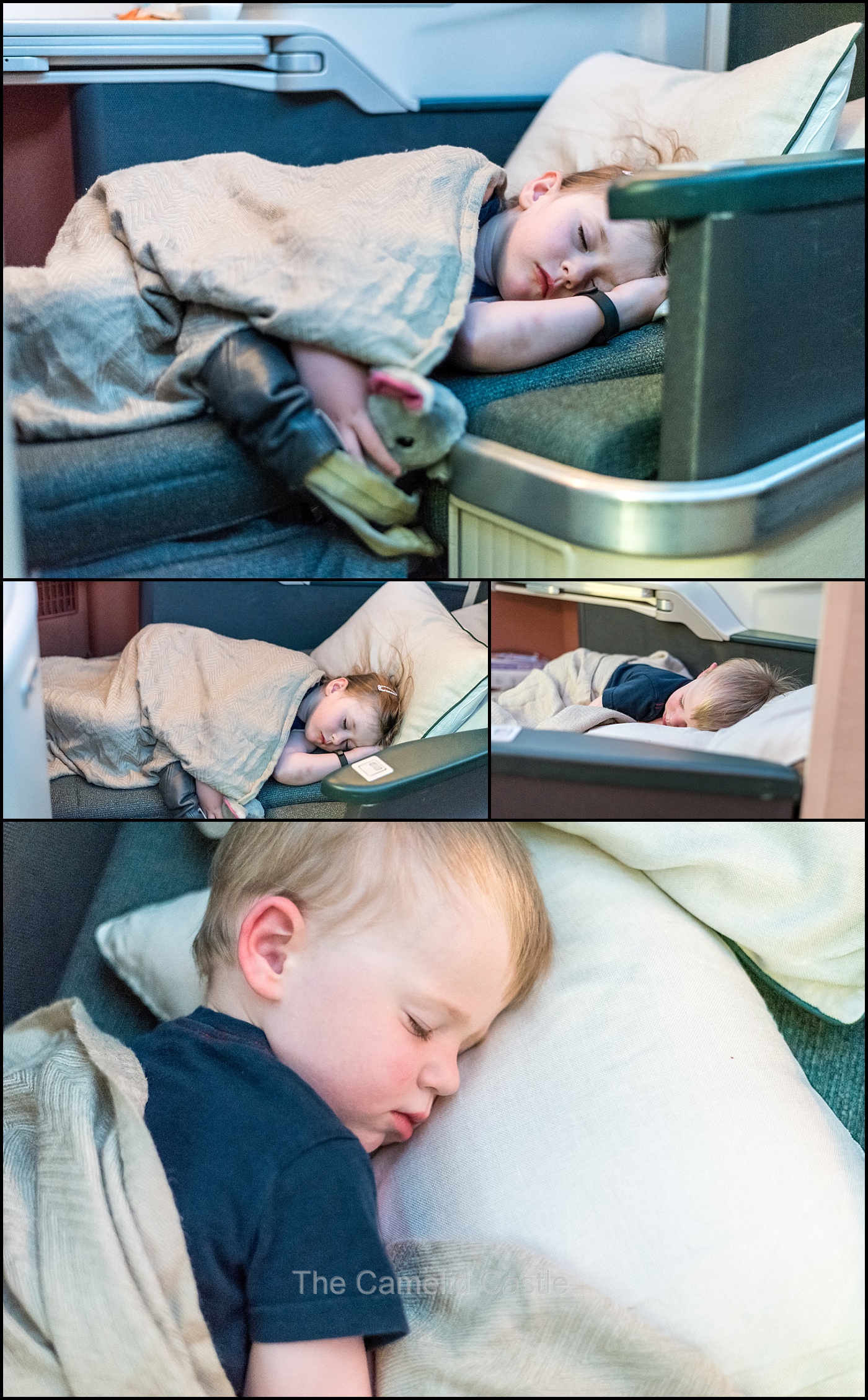 Sadly we only had 2.5 hours left to enjoy our luxury, but Anto and I managed to fit in
a 4 course dinner (which were most definitely not hungry for ) and a few more drinks. We were then convinced to partake in the fruit and cheese course being wheeled around in the cart and a huge tub of Häagen-Dazs icecream while watching movies, of course accompanied by several more cocktails and coffees.  With hardly anyone in the cabin the staff were too attentive and we ended up having constant food and drink service!

Sadly, with all the eating and drinking we didn’t end up getting to nap and the flight ended all too soon.  Normally I want to be off the plane as soon as possible, but it was a quite a pleasant flight (especially with the kids sleeping) so a few circles of the airport would have been appreciated!

The kids slept all through landing, even when they had their seat-beds returned to upright, that is how tired the poor dears were. It was almost midnight, so to be expected!  A lucky Miss Astrid got to visit the cockpit and had a good old chat with the pilots and pushed some buttons while I was loading a sleeping Soren into the ergo and popping him on my back.  Both kids were congratulated on being so well-behaved during the flight, easy when they sleep most of it and had 5 staff at their beck and call for the rest of it….

Due to being in business class we were speedily ushered out of the plane and had our bags almost, instantly and were through immigration in about 10 minutes flat.  Despite being well after midnight there were still quite a few flights coming into KLIA.  It is 57km from the airport into ‘Sentral’ (central station) which is where our hotel was located. Luckily there is the KLIA express train which runs directly from the airport to Sentral.  We had a 15 minute wait for the next train and it was a 28 minute trip to Sentral.  Unlike the super-speedy Hong Kong express trains, the KLIA express was a more leisurely pace and it did a lot of rocking back and forth, making for a rather green Astrid!  Both kids were desperately trying to nap in our laps as it was now well after 1am, but we did eventually make it Sentral, without anyone throwing up from the train rocking.

For our Malaysian portion of the trip, we were staying at the Aloft KL Sentral, which was conveniently connected to the train station by Sentral mall.  Unfortunately, the internal access from the mall to the hotel closes at midnight, but we did only have a very short outside walk to make it to our hotel.  When we know we are flying in late, booking a hotel near a train station or airport is definitely the way to go! We did manage to get checked-in and all get to sleep around 2am, a rather long day…..

After the late night the kids slept until almost 8:30am.  Anto and I had woken up early due to excessive traffic noise and a massive thunderstorm, welcome to Malaysia! The sound of rain and loud rain was actually quite pleasant, the traffic and car horns, not so much….

Once we were up and about it was time to check out the hotel room and our new hotel, we hadn’t given it a second glance when arriving in the middle of the night.  The Alofts are a much more modern style hotel than the Marriotts we had been staying in earlier in the trip. Not quite as posh but plenty comfortable enough for our 4 days in KL. 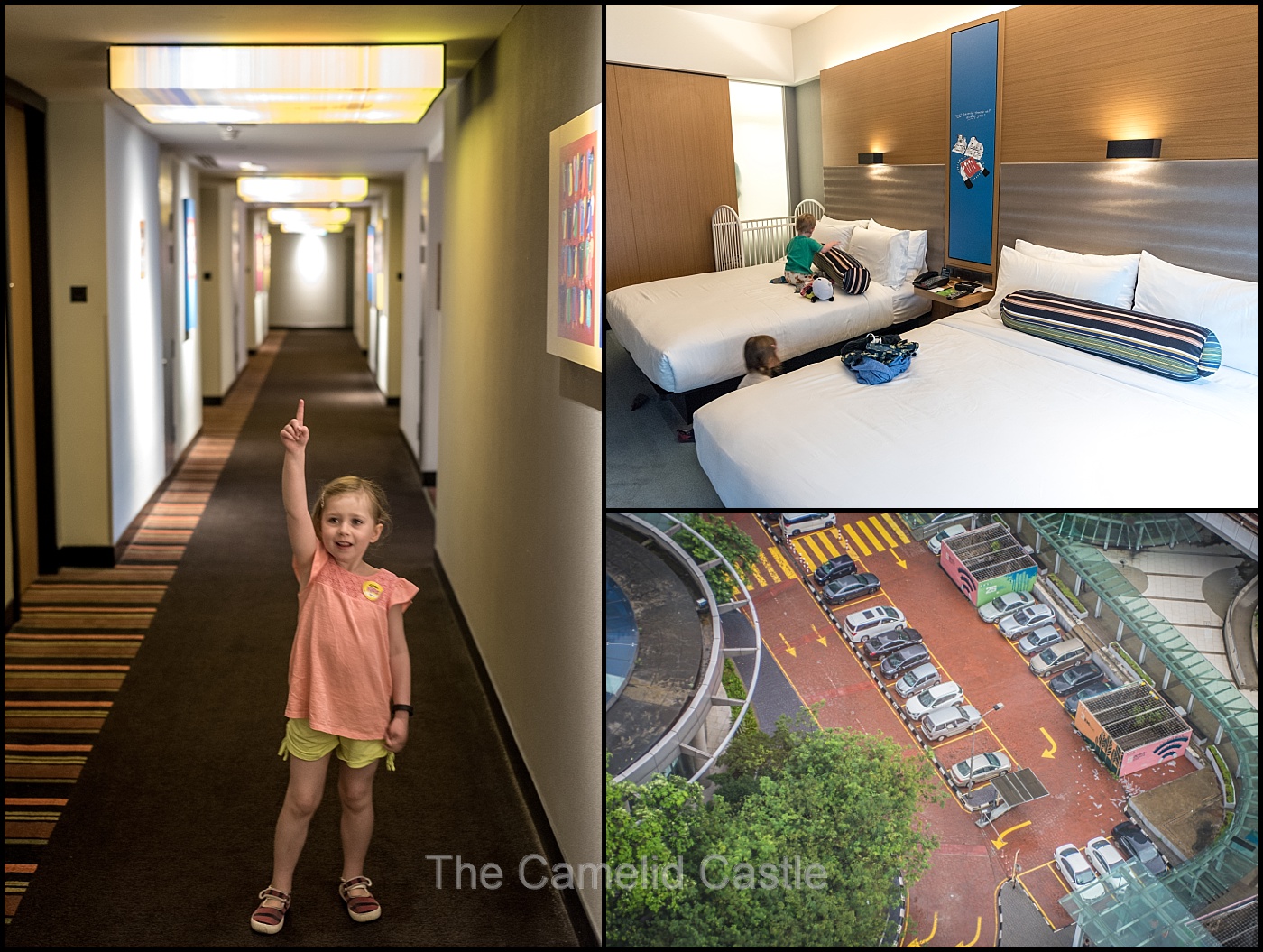 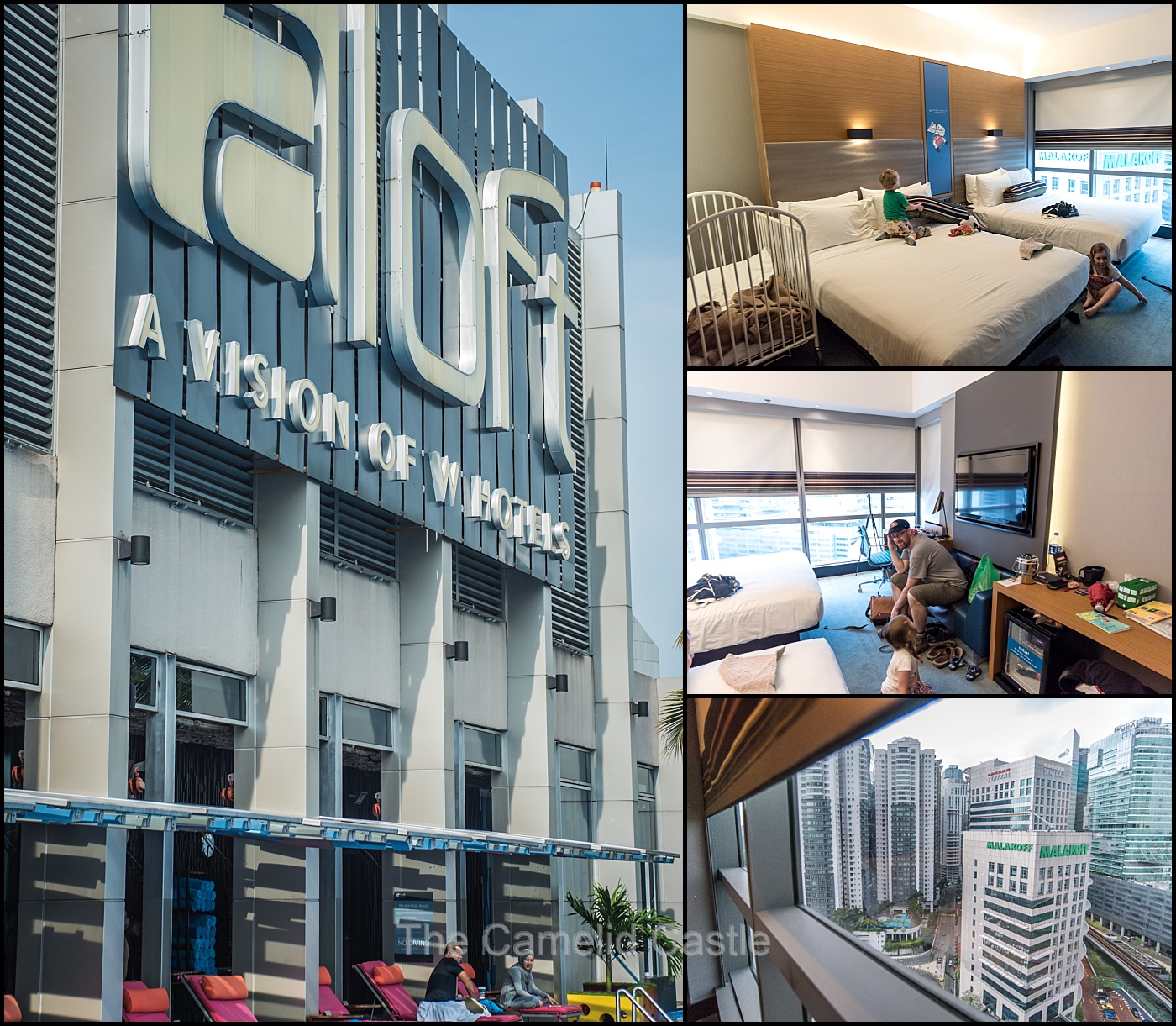 After checking out our new digs, it was down to investigate the breakfast options. Again we had our buffet breakfast included in our room rate. We had been totally spoilt with the fantastic breakfast at the JW Marriott in Hong Kong, but the Aloft KL Sentral breakfast did not disappoint.  There was an even bigger variety of Asian and Indian dishes, along with the usual hot and cold buffet fair.  There was also an eye-wateringly large array of donuts, cakes and other sweet things.  Anto and I tucked into a huge plate of curries and the kids had soft-boiled eggs washed down with various forms of cake and donut.

Despite the breakfast-induced sugar high we were all rather tired. Since it was still raining (quite a lot) we decided to head over to Sentral shopping mall to get some cash, supplies and check out our dinner options.   We could get from the hotel to the mall entirely inside with only about 30 seconds of walking, again we had gotten used to this in Hong Kong!

KL Sentral mall is rather large and spread over lots of floors.  It was pretty quiet being before lunch time, but we had no trouble finding an endless supply of cheap and delicious smelling food options to return to later in the day. We were also acutely aware that the exchange rate was much more in our favour than it had been in Hong Kong, so if it kept raining an afternoon of shopping was on the agenda.

Everyone was more than a little tired (and not the least bit hungry after a huge breakfast), so it was back to the hotel for a rest. The local police tried to ruin this plan with loud sirens and quite a bit of yelling due to someone parking where they shouldn’t have, yep even 17 floors up you could hear it!  Eventually we all had some rest though, and upon waking up it had stopped raining so it was up to the rooftop pool for a swim.

The Aloft KL Sentral pool gave pretty impressive views of the city, from the roof (the 28th floor) you could see all the way into the city, although it was a tad hazy.  The pool had a pretty impressive infinity edge and was also handily situated next to the roof top bar! 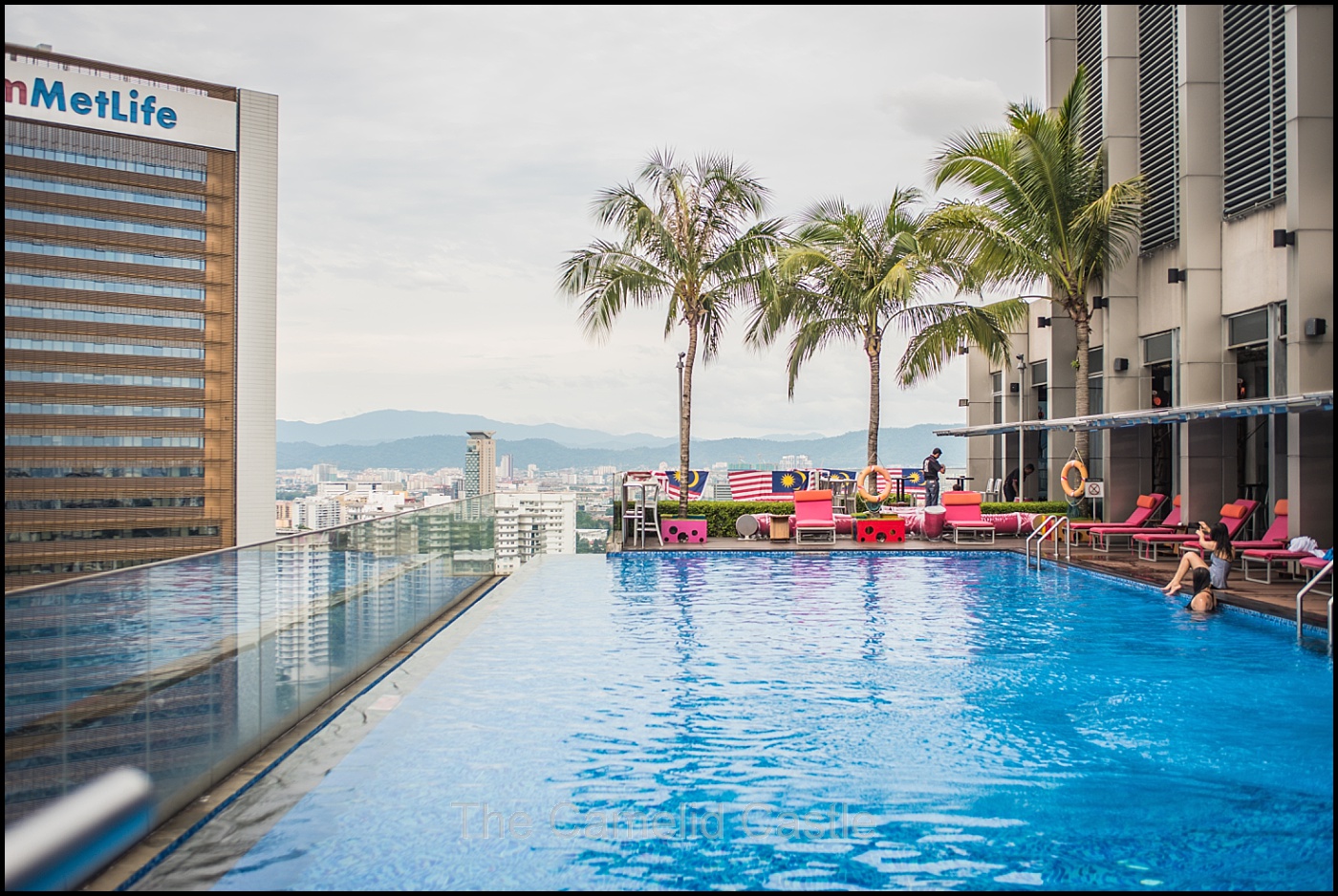 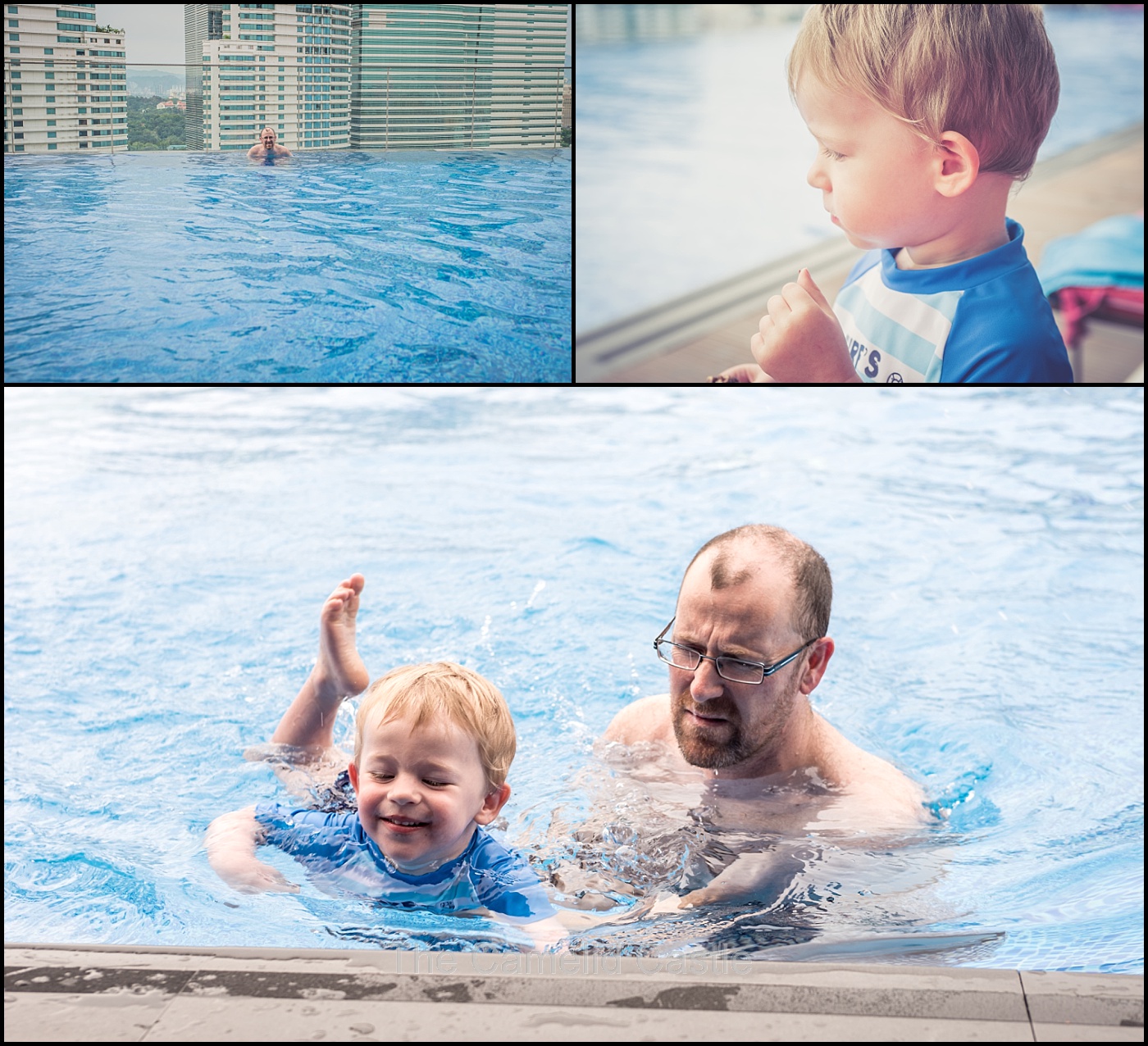 Although the water was a tad colder than our hotel pool in Hong Kong, it was pretty warm outside so it made for a nice relaxing afternoon, after a long week of travel.  The kids enjoyed their favourite pool game of being tossed into the air by Anto and plenty of time to swim and splash. 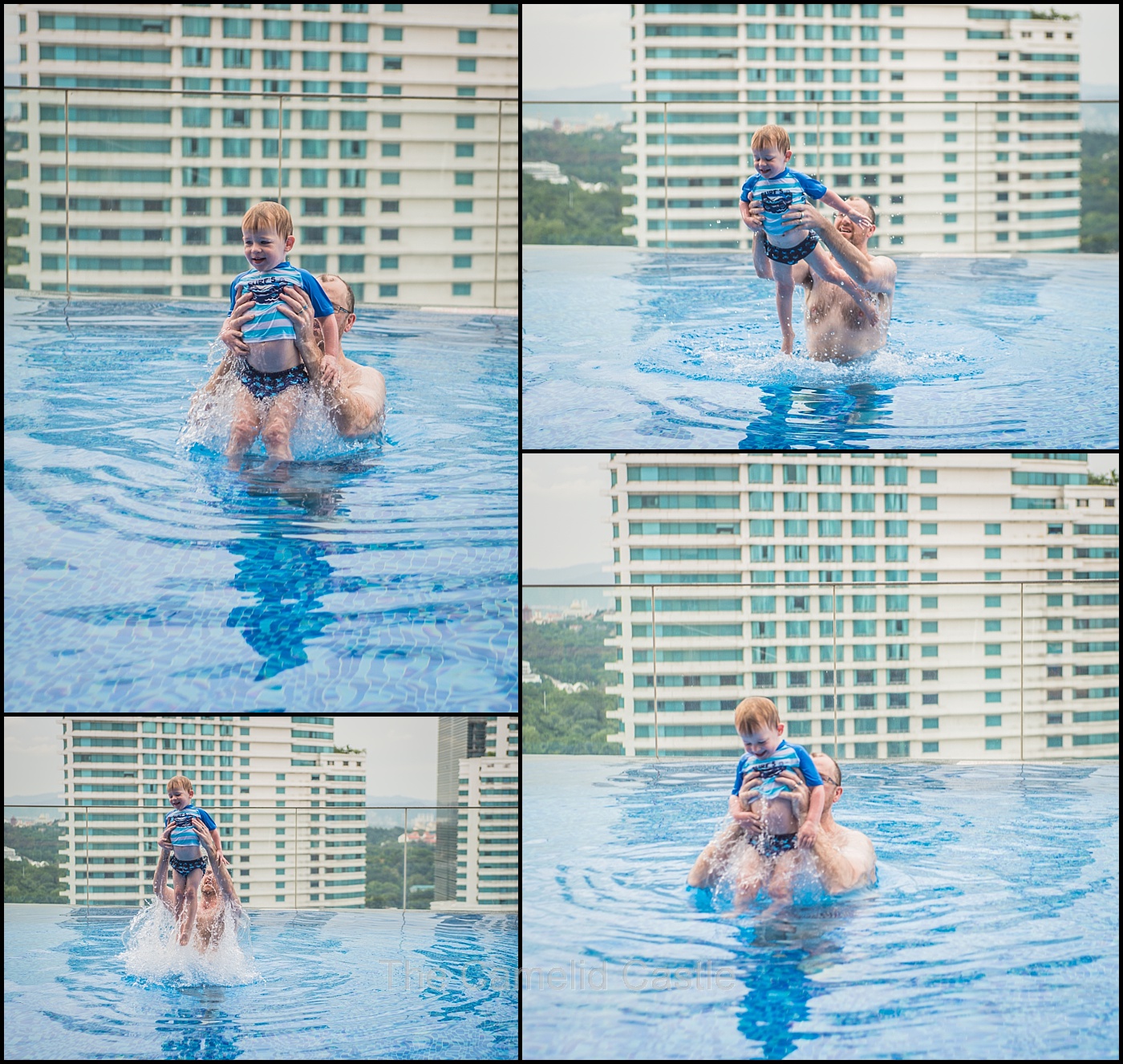 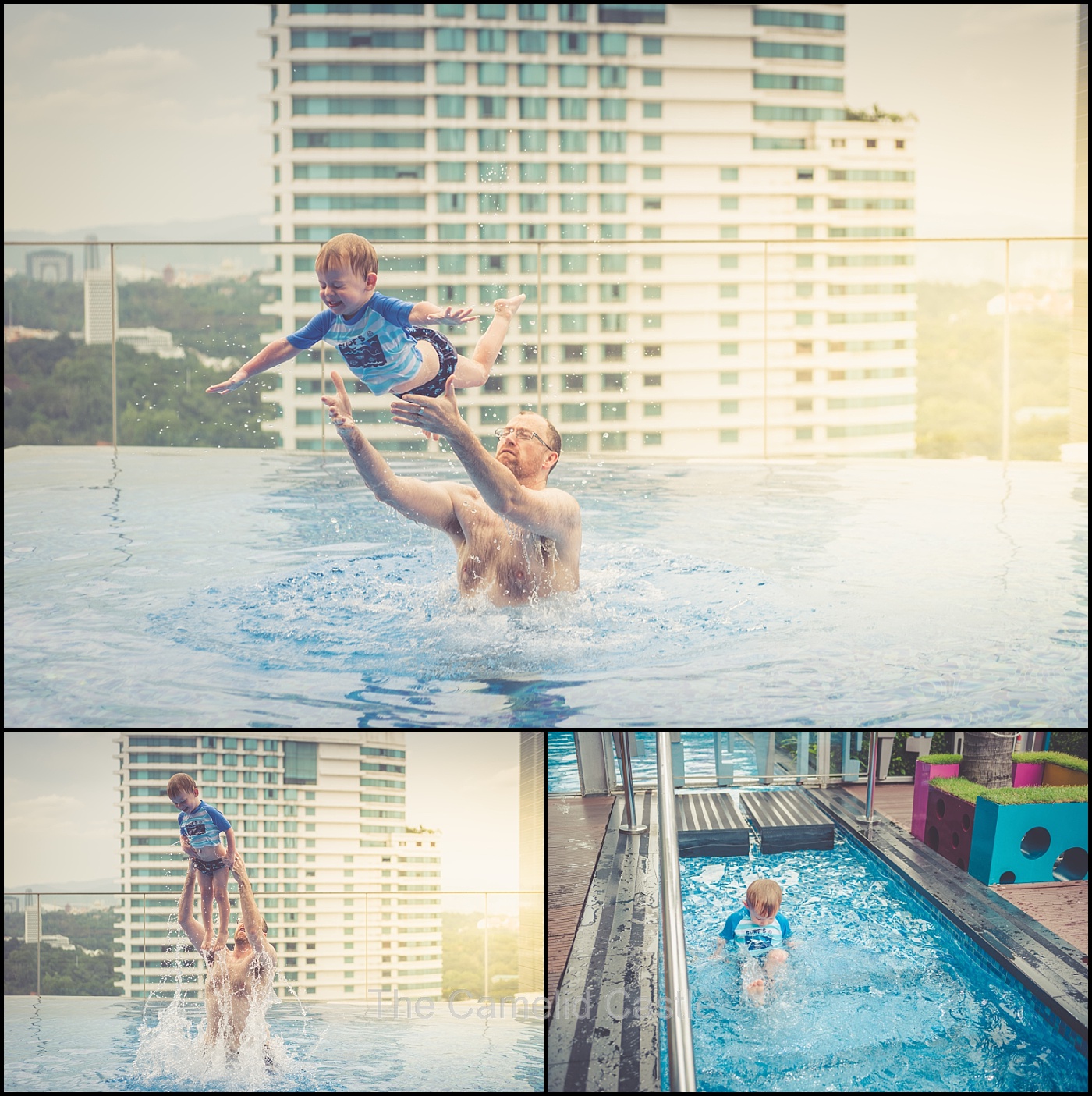 All feeling refreshed it was time to head back to the mall for some shopping and dinner.  We had spied way too many things we wanted to eat, during our visit early in the day, so it was tough choosing.  In the end we went to one of the huge food halls and I had mushroom mee gong, with spring rolls and samosas. The kids had duck rice (which came with soup), and Anto had a curry soup full of gross things. Predictably Soren was keen on the gross soups! 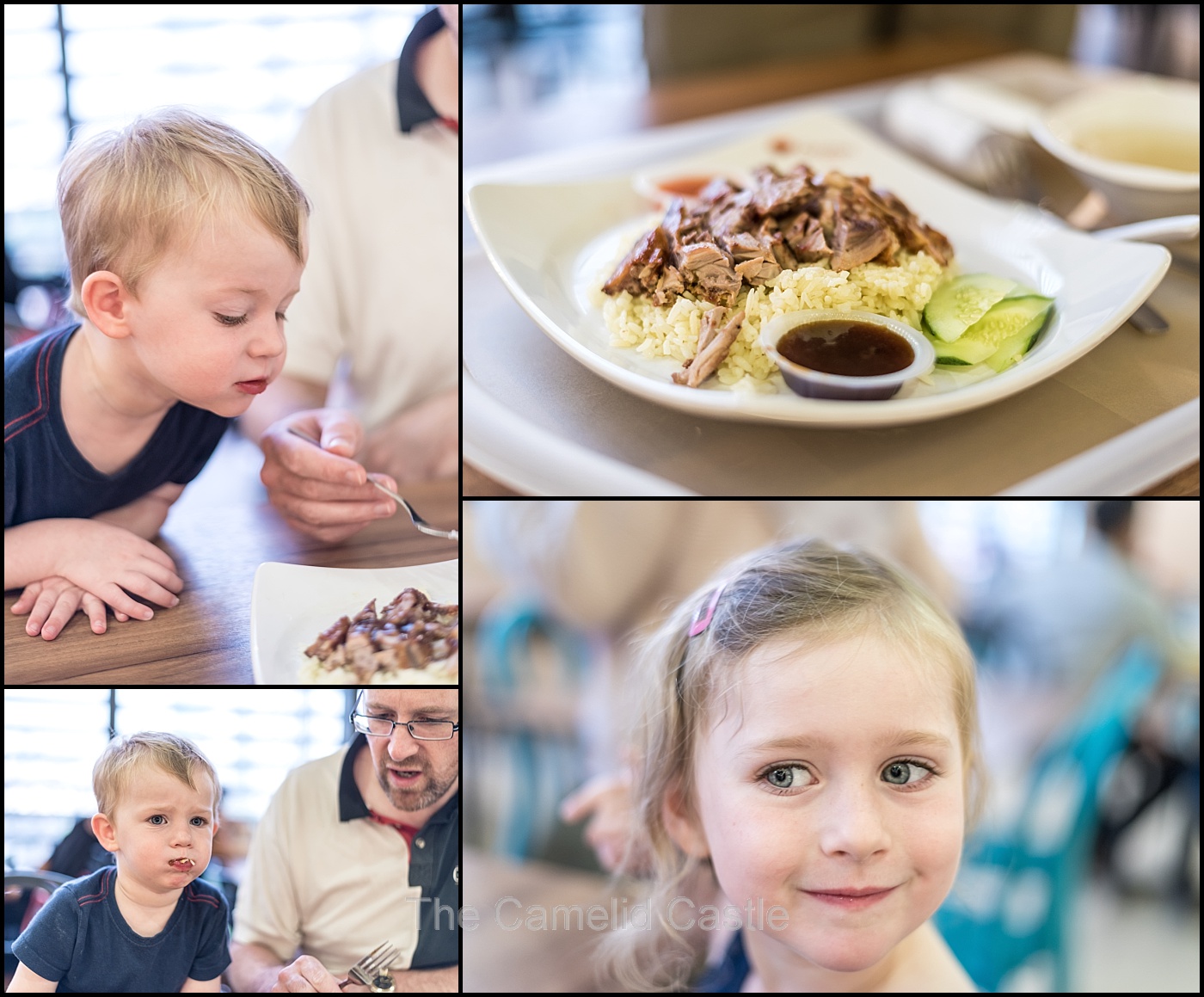 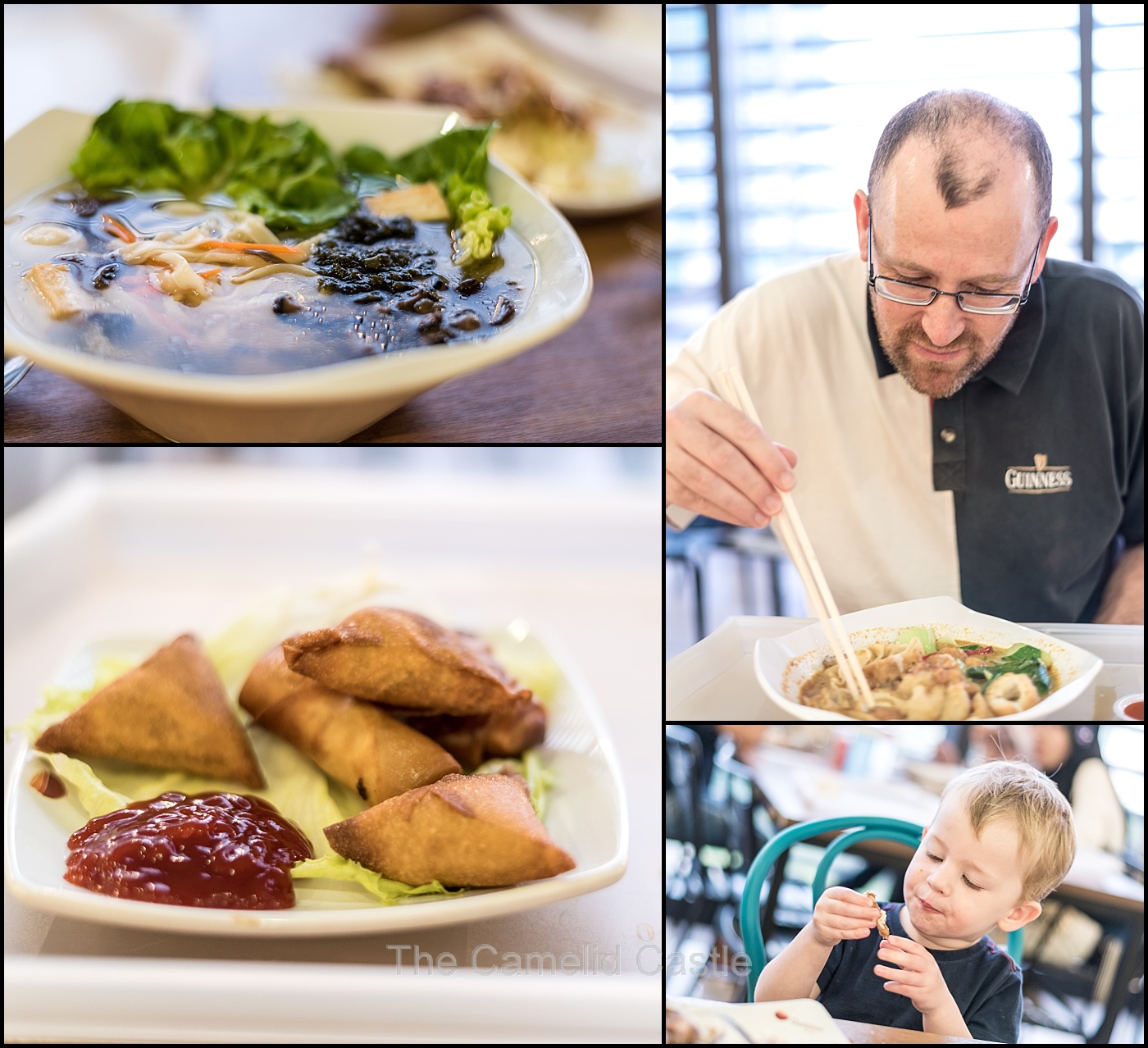 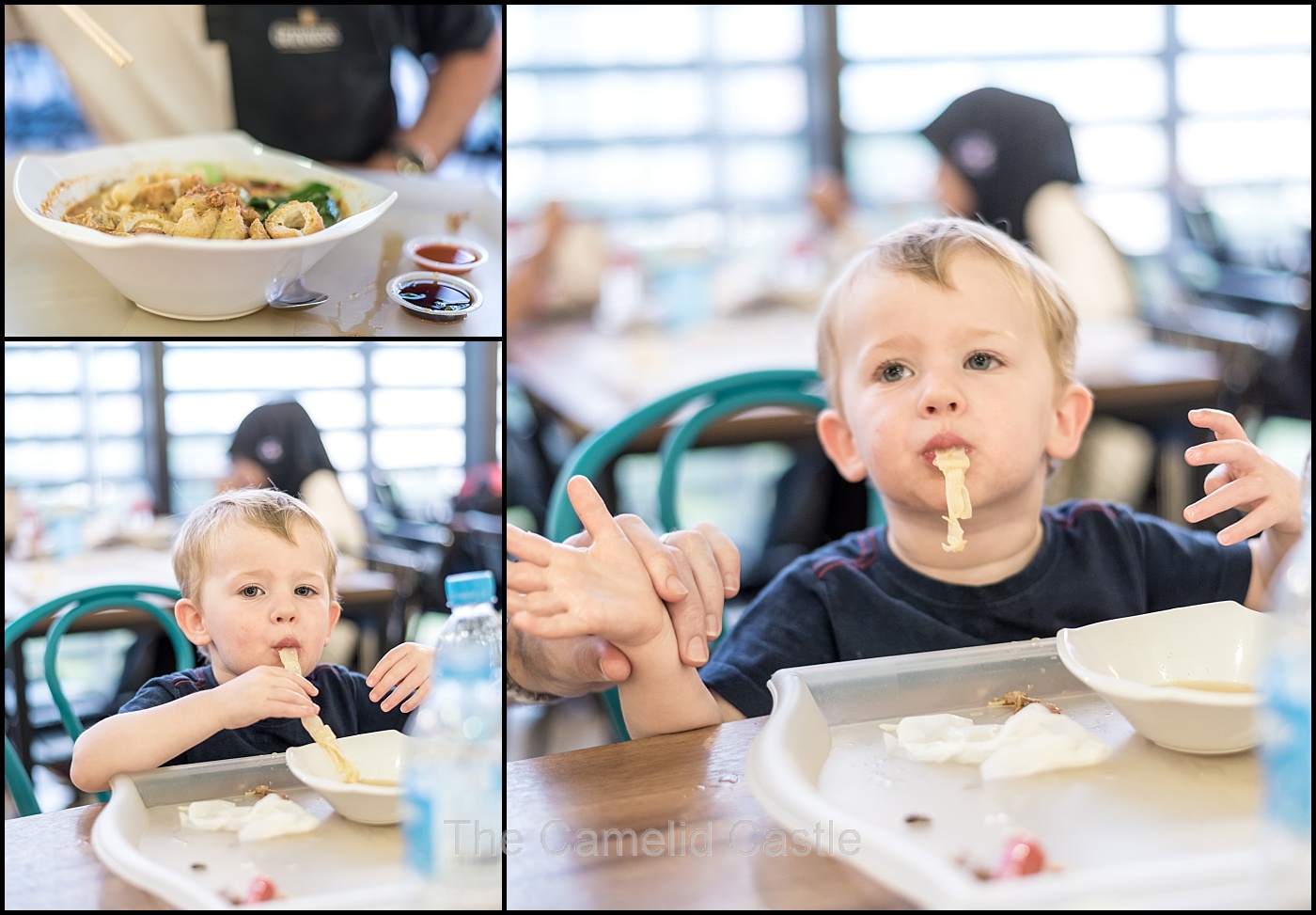 Delicious dinner consumed it was time for a more shopping, finally the shopping centre was actually looking busy.  We had originally planned to go for a visit to the hotel rooftop bar to watch the sunset, but the kids were very over-tired so instead we went back to our room with the hope off getting them to bed at a decent time…. which they resisted forcefully so our plan didn’t quite work and I was wishing I had of just gone for the cocktail at the bar after all!

The only views we ended up with were the ones from our hotel room window…….. they weren’t too bad though. 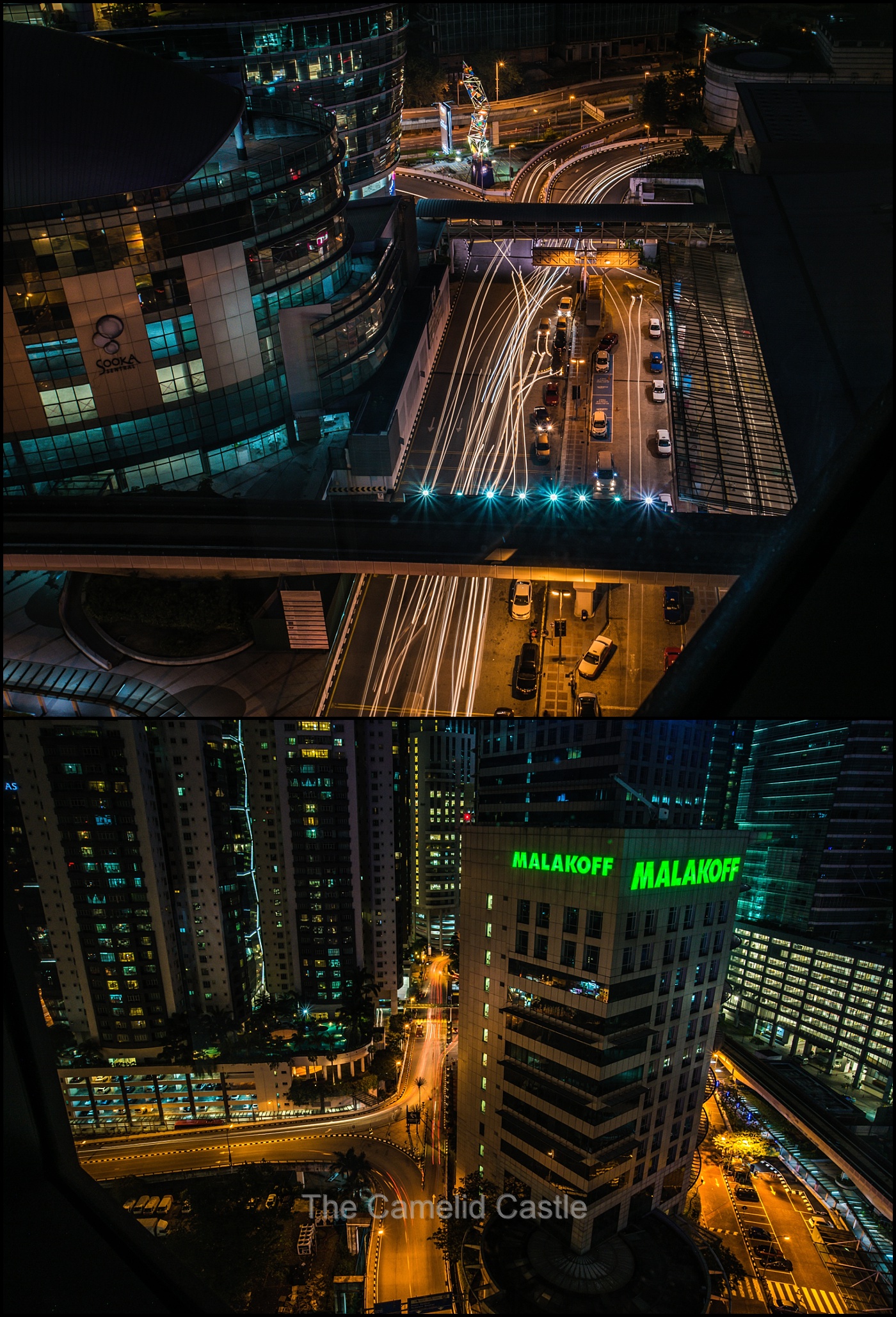 We did some traffic watching while planning the rest of our stay in KL.  We had plenty to fit in the next few days, and the weather was looking mighty dicey!

Statistics for Tuesday the 30th of August, in Kuala Lumpur, Malaysia – the temperature range was 23 to 30 degrees with 100% humidity and a good dose of rain and thunderstorms.  The heat index reached 35 degrees, so it was still a pretty warm day! It had been a very lazy day by our standards and the total walking for the day was 5.8 km, most of that was between leaving KLIA and our hotel.

Next up, exploring KL as we paid a visit to the botanical gardens, the KL bird park and the butterfly park.

3 thoughts on “30 August 2016 – Flying in style from Hong Kong to Malaysia and our first day in Kuala Lumpur….”